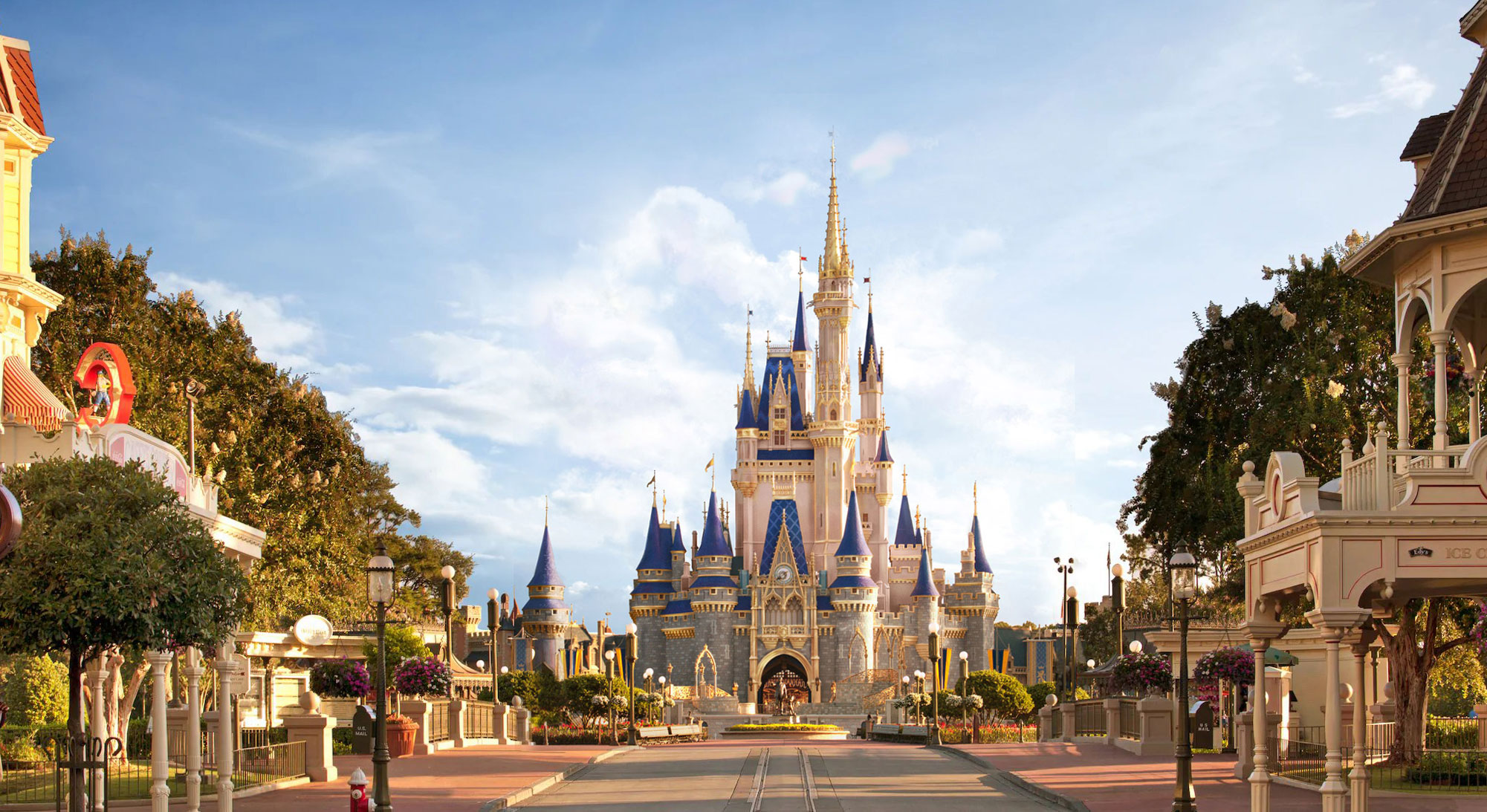 Walt Disney World recently announced a Royal Makeover for Cinderella Castle at Magic Kingdom that will be punctuated by gold and richer blue hues ahead of its 50th Anniversary. The announcement raised more questions than it answered, and in this post, we’ll cover the construction impact, how the icon will look during the transformation, and photos of progress thus far.

The initial press release Walt Disney World issued only indicated that Happily Ever After and Mickey’s Royal Friendship Faire would continue, and that work would begin in the coming weeks and continue through summer. Several things weren’t addressed, including the obvious question: why would you repaint right before replacing Cinderella Castle with a giant gold inflatable cake?!

Joking aside, a lot does remain unknown and likely will slowly be revealed by Walt Disney World in the coming weeks and months. In the meantime, readers of the Disney Parks Blog inundated the post with questions, and we now have answers to some additional questions that’ve been posed from Jason Kirk, VP of Magic Kingdom…

Will reservations for experiences inside Cinderella Castle be cancelled or changed as a result of the work?

“Throughout the makeover, guests will still be able to enjoy favorites inside the castle such as Cinderella’s Royal Table and Bibbidi Bobbidi Boutique.”

Will Cinderella Castle be covered by construction scrims?

“While temporary construction equipment may be present while Cinderella Castle receives its royal makeover, it will remain uncovered and we will do our best to ensure guests are still able to capture special photos and memories in this iconic spot.” 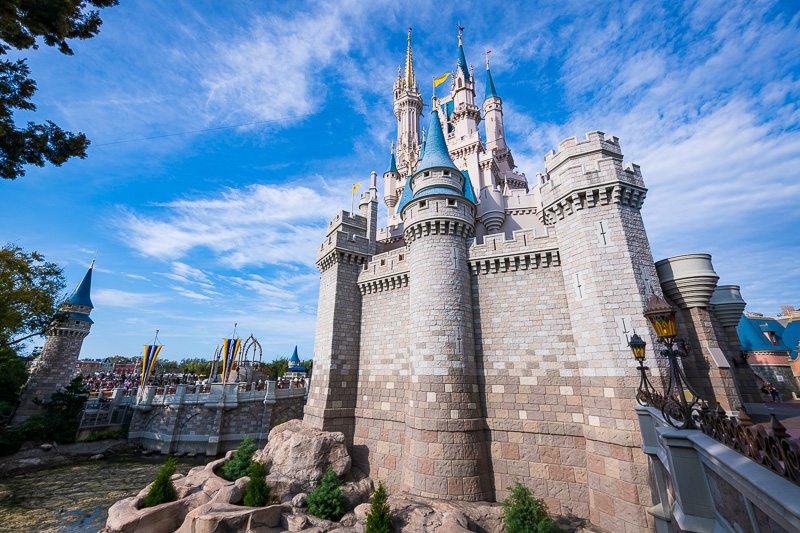 Is there an anticipated completion date?

“Work is expected to begin in the coming weeks and be complete before the end of summer.”

It’s worth noting that summer technically ends on September 22, 2020. That’s something to remember because “Disney Seasons” are often very different than the real world ones they use for dates. Summer doesn’t end until late September, but that’s halfway through Halloween season at Walt Disney World, which begins over a month earlier. 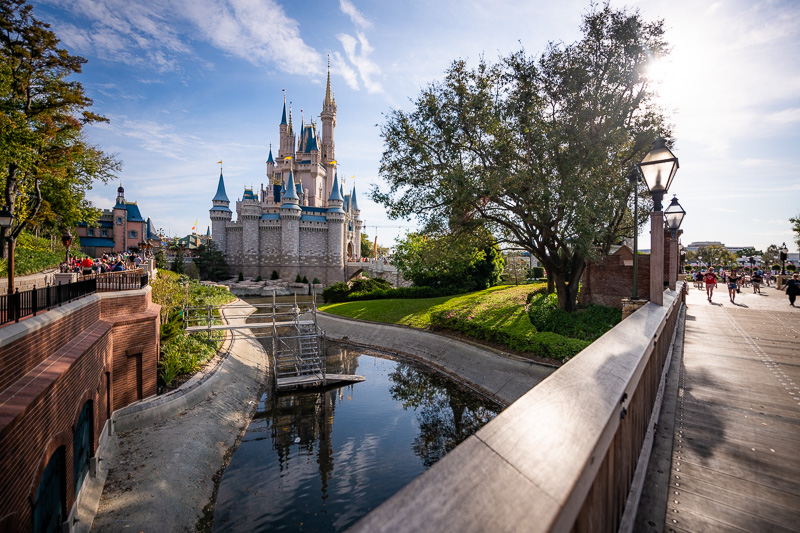 The other operative word in that statement is “expected.” It’s entirely possible the work takes longer than anticipated, and bleeds further into fall. It’s also possible that everything gets done in a brisk manner, and work finishes by July. While many other recent projects have fallen behind schedule, Walt Disney World has every reason to work expeditiously here.

Cinderella Castle is the icon of Walt Disney World, and already the main reactions to this news have been fear and anxiety over how it’ll impact multi-thousand dollar vacations. Disney realizes the stakes are high here, which is likely why scrims won’t be put up (despite every other similar castle project around the globe receiving them recently). If forced to bet whether this will be done early or suffer delays, we’d bet early. Disney will want to avoid the “vacation ruined” complaints. 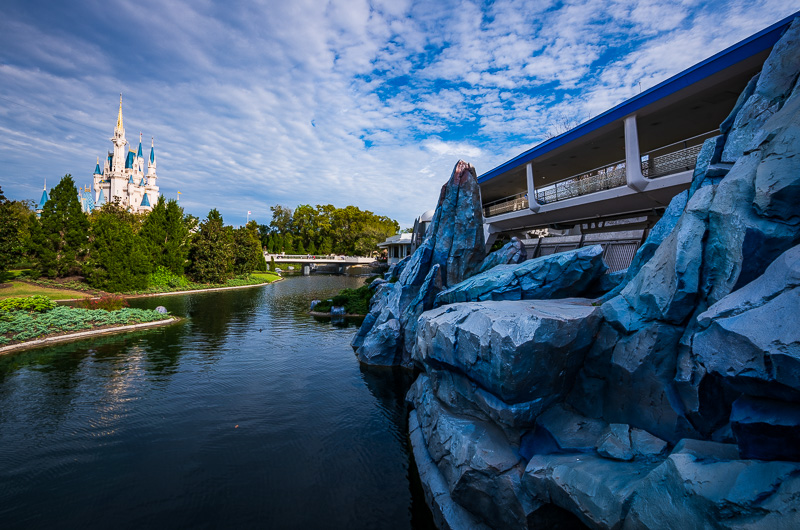 There are also a few questions that have been asked, but not answered:

There are probably more questions floating around than that, but those are the most common ones I’ve seen. In the interest of full disclosure, I’ve only seen the trees and benches question (two separate questions, actually) asked once. I think it’s such an underrated question and valid point that I’m nevertheless including it. 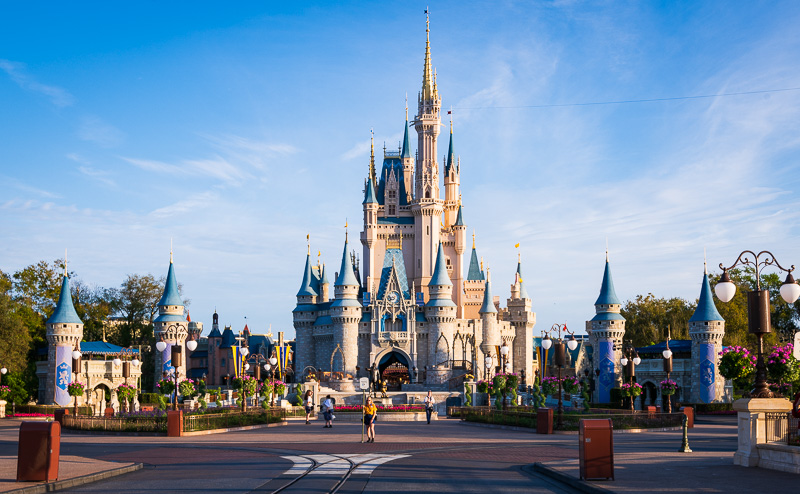 Continuing on to the construction photos…

We were in Magic Kingdom for a pre-park opening breakfast this week, and I figured that was the perfect chance to capture Cinderella Castle in lighting similar to what’s shown in the concept art. 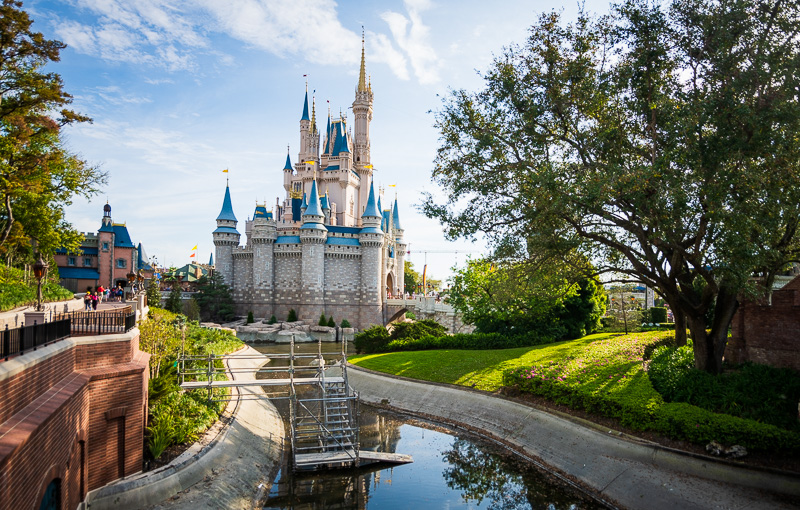 It’s still unclear whether the concept art was deliberately chosen because it conveys the rose gold or pink glow that Disney is planning to add, or if it’s coincidental–merely reflective of the time of day the source image was shot.

In my initial commentary, I didn’t even consider the possibility that it’s deliberate. I certainly hope that’s not the case. (However, this article by Disney subsidiary ABC News via Good Morning America suggests it will be a “rose-pink” color.) Cinderella Castle is timeless and stately, and shouldn’t chase played-out trends. It’s one thing for a spirit jersey, but another entirely for the icon of Walt Disney World. 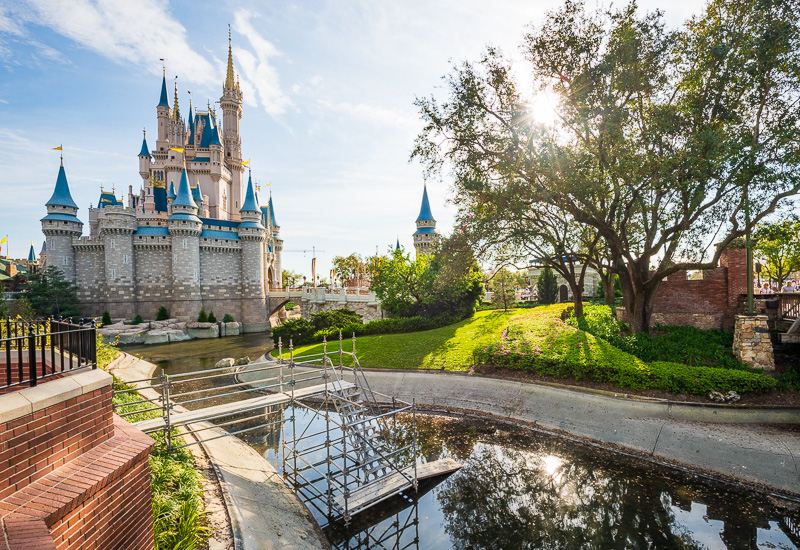 Then again, what do I know? I remember visiting as a kid during Walt Disney World’s 25th Anniversary and I absolutely loved the infamous Castle Cake. It’s hated now, but that larger than life cake blew my mind when I was young. As a child, I didn’t question its tastefulness or gaudiness. It just looked cool.

Anyway, above is a photo of how the moat looks from the seating area over by Sleepy Hollow in Liberty Square. Those are stairs descending into the partially-drained water. 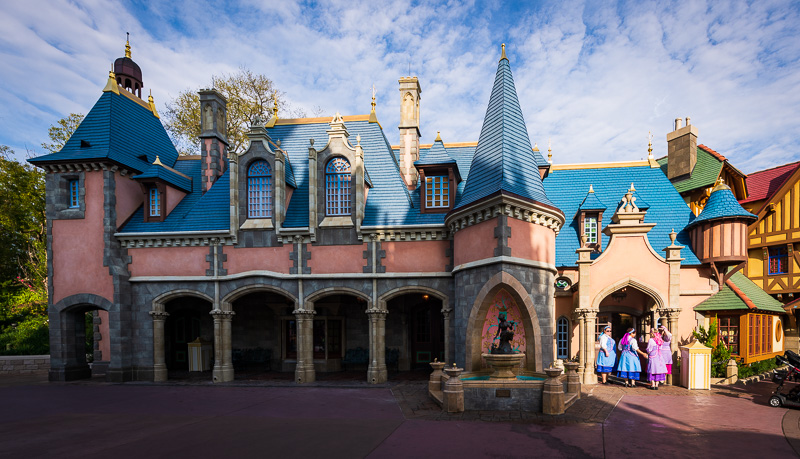 Heading back into Fantasyland, we can see that part of the Castle Couture rooftop has already been repainted a more vibrant shade of blue, with new gold accents added. It’s difficult to tell from the photo due to the variations of light and shadow, but the new blue on the right looks fantastic. It really pops.

While I’m slightly apprehensive of the rose gold, the new blue will be an undeniable upgrade. Cinderella Castle‘s colors look a bit flat right now due to years of fading under that intense Florida sunlight. It’s easy to prefer what’s familiar, but I think there’s a lot of potential here–and many fans will come to see that once work starts. 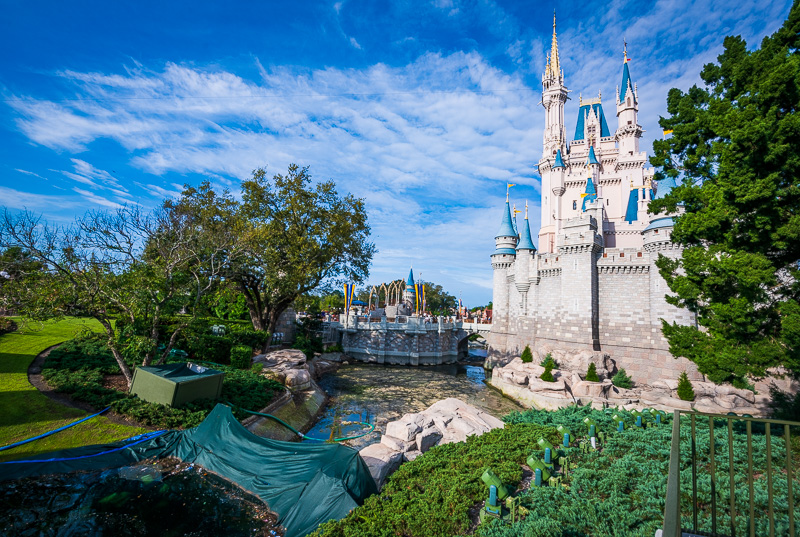 Coffer dams have been installed on both sides of the moat to enable construction equipment to enter the water. Obviously, that has not occurred yet, but that’s how this work will be accomplished.

Our expectation is that the cranes will be lowered during daytime hours, just as has been the case the last several years with the holiday Dream Lights installation. 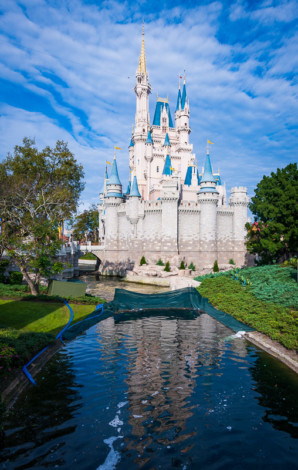 Right now, you can barely even notice the coffer dams from a distance.

That’s true even if you’re on the Tomorrowland or Liberty Square bridges. If you were having a PhotoPass portrait taken in one of these spots, you would not be able to notice at all due to the angle. 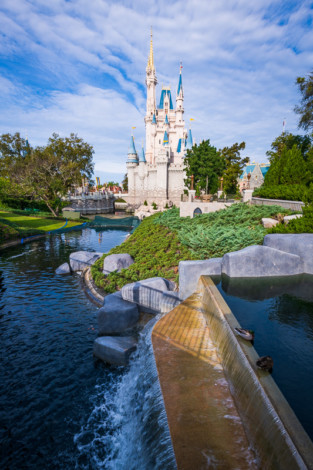 From farther back on these bridges or directly in front of Cinderella Castle in the Central Plaza or on Main Street, you can’t tell at all. At least, not right now.

So long as this construction/painting is done after hours and the equipment is lowered during operating hours, the guest impact should be minimal. Perhaps even negligible. 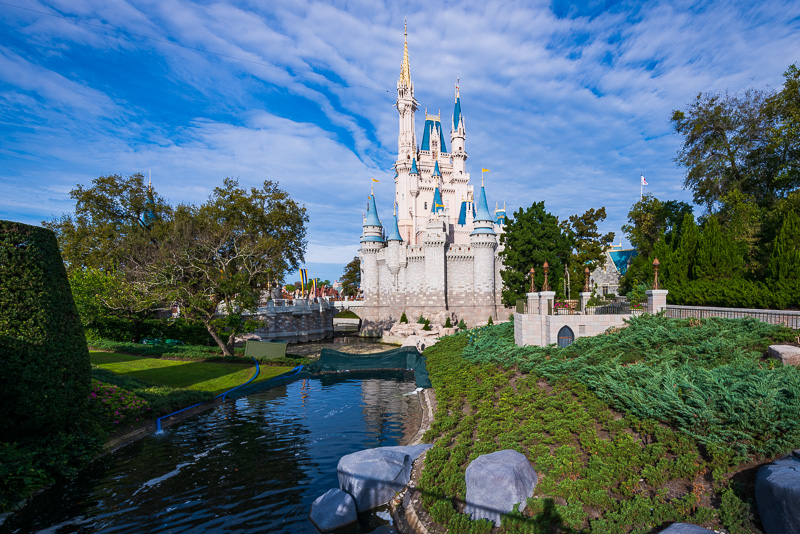 It’s a bit odd that Walt Disney World wasn’t more up front about this with the initial announcement. A lot more detail could’ve been conveyed that would’ve allayed fears and made for a more enthusiastic reaction to the news. This isn’t the company’s first rodeo, and there’s no way someone didn’t anticipate guests would freak out about the views of Cinderella Castle being blighted during their vacation.

Fortunately, it appears that this will not be the case. It’s always possible that Walt Disney World will get more aggressive with construction and less careful about keeping the equipment out of the most photogenic vantages. However, I’m more than willing to give Disney the benefit of the doubt here. They know how important those Cinderella Castle photos are to guests, and I think they’ll make every effort to minimize the negative impacts to guests this summer.

On balance, I’m still cautiously optimistic about Cinderella Castle’s “Royal Makeover.” While I expressed some concerns about the (potential) rose gold hue, I think the faded blue and washed out grey colors will really benefit from a fresh coat of paint. While I hope restraint is exercised and the designers don’t go overboard in making it too ostentatious, I’m willing to wait and see. I generally like the new look of Sleeping Beauty Castle, and am hopeful that the finished product here is an improvement over how Magic Kingdom’s icon presently appears.

What do you think of Cinderella Castle’s royal makeover? Are you a fan of the gold trim? Think more will be done for the 50th Anniversary, or do you suspect this is it? Do you think Cinderella Castle will be painted rose gold, or do you suspect that’s just the source image that was used for the concept art? Do you agree or disagree with our assessment? Any questions we can help you answer? Hearing your feedback–even when you disagree with us–is both interesting to us and helpful to other readers, so please share your thoughts below in the comments!