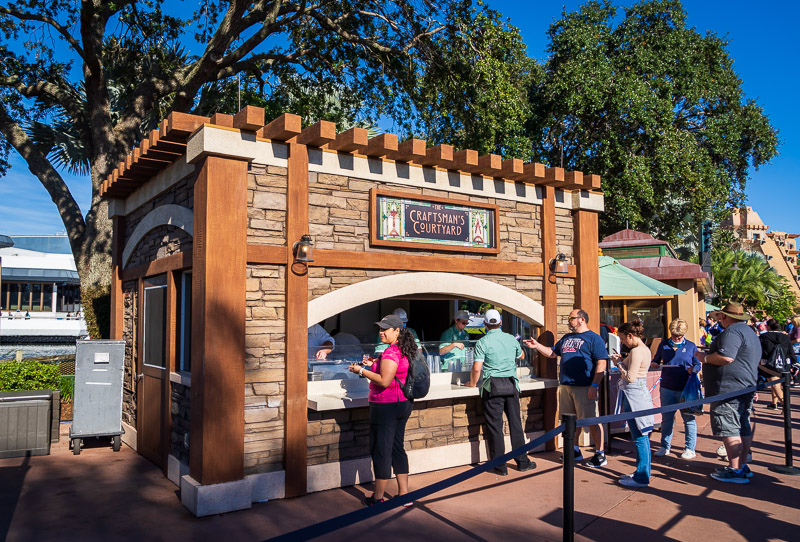 Our first stop at the 2022 Epcot International Festival of the Arts is the new Craftsman’s Courtyard Food Studio. This Walt Disney World dining review features photos of everything on the menu at this booth plus our thoughts on each dish.

This is our first food booth review for this year’s Festival of the Arts, and hopefully not the last. Admittedly, we’ve been pretty laid back about covering the Food Studios, which is for a few reasons. First, it’s the shortest Epcot festival of the year and the one least-attended by tourists, so there’s not as much value for (or demand from) our audience.

Second, because Epcot’s Festival of the Arts is about so much more than food. While the cuisine is artfully done and often delicious, it’s also the least important element of the event. (I also feel slightly guilty that our first bit of coverage was about the insane lines for the Figment popcorn bucket.) Finally, writing these reviews is a chore and I concoct excuses to avoid doing them–see above…

I was really excited for Craftsman’s Courtyard when it was first announced. Although I realized it was highly unlikely, my hope was that this Food Studio would feature dishes “imported” from Disney’s Grand Californian Hotel, and its excellent restaurants, like Napa Rose and GCH Craftsman Grill.

Knowing that was pretty unlikely, I was happy when the menu was revealed to feature “seafood and refreshing salads inspired by one of the many hubs of the Arts and Crafts movement: the coast of California.” Here’s a look at what, exactly, the Craftsman’s Courtyard Food Studio features… 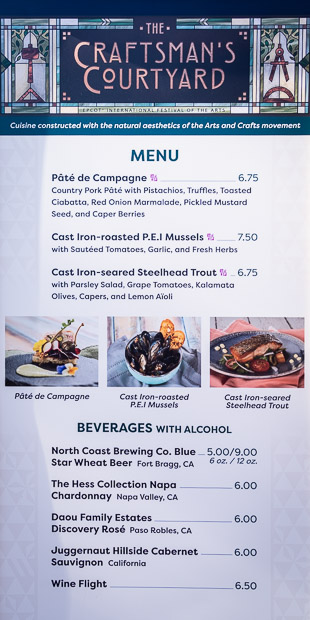 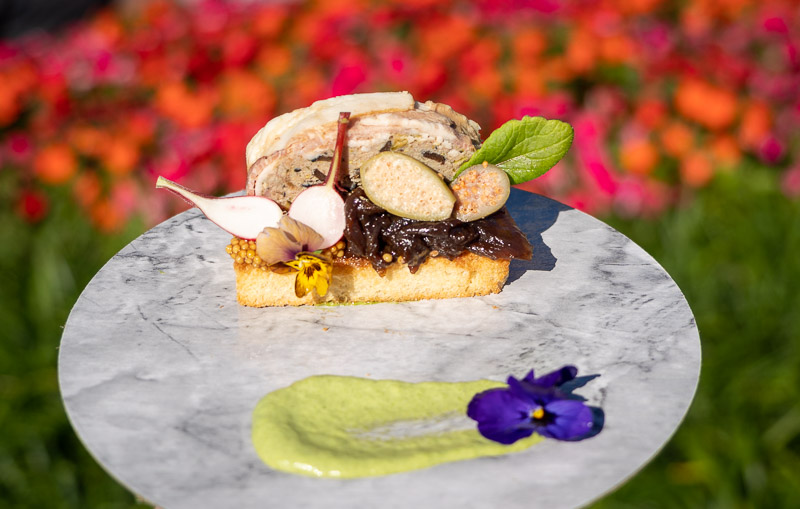 PÃ¢té is a love it or hate it dish, and I’d say this is a great introduction to determine which camp you’re in. The pork pÃ¢té itself is tasty enough, but what elevates it is the accompaniments. There is a lot going on here, both in terms of pronounced earthy flavors and variety texture, and it all helps elevate the dish and mask the cold slab of meat pie. 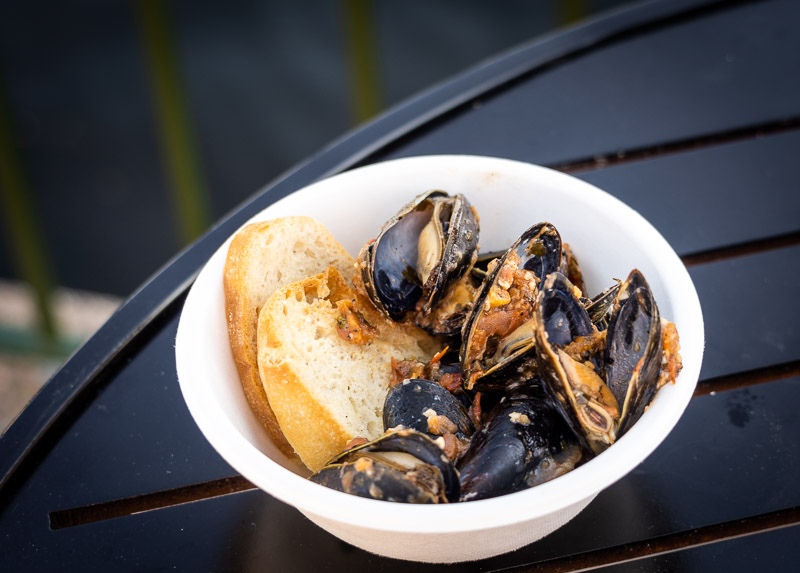 Next up is the Cast Iron-Roasted P.E.I. Mussels with Sautéed Tomatoes, Garlic and Fresh Herbs.

These far exceeded expectations in terms of flavor and preparation. The portion size was also sizable, justifying the above-average price. The mussels were fantastic, having none of the ‘heat lamp hallmarks’ that sometimes plague festival food–thanks to them being freshly grilled right beside the Food Studio.

Beyond that, our mussels were hearty, high-quality, and had an exceptional flavor. The tomatoes, garlic, and herbs were delicious but didn’t overwhelm (a lot of ours were in the bottom of the bowl, under the mussels–making them easier to pair with the garlic bread). Highly recommended. 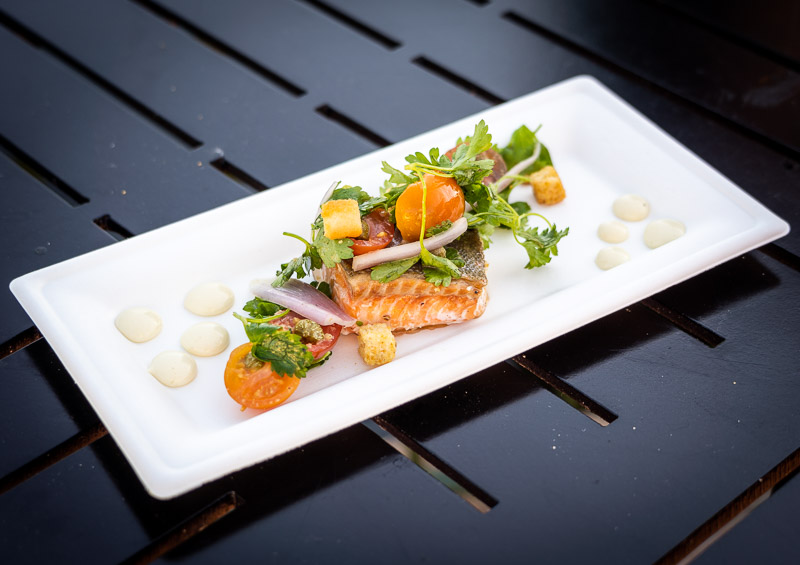 This is a competently prepared, albeit undersized portion of trout. If you want a fresh salad and solid piece of fish, it’s a decent-enough option. Basically, it’s a crowd-pleaser; a dish that won’t wow or disappoint.

Here are your options in terms of drinks at the Craftsman’s Courtyard Food Studio: 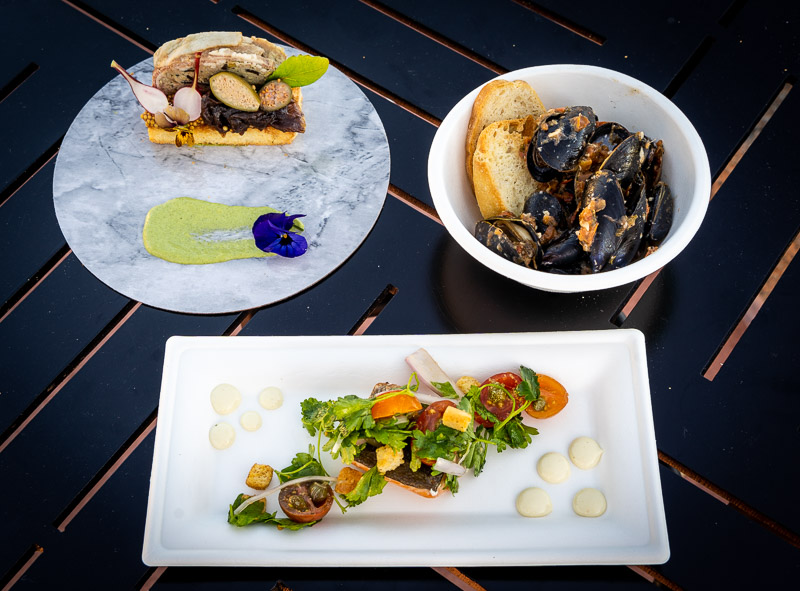 Overall, the Craftsman’s Courtyard Food Studio at the 2022 Epcot International Festival of the Arts is a decent addition to the event. It offers a great, nuanced introduction to pÃ¢té for those who might have their trepidations, a hearty helping of delicious mussels, and a middle-of-the-road fish dish. About the only thing it’s missing is a decadent dessert to pair with these light and healthy entrees, but the nearby Deco Delights has you covered there.

Also notable is that in our couple of days at Festival of the Arts thus far, Craftsman’s Courtyard has consistently had one of the shortest lines. This confounds me, as its location and on-stage grill should catch the attention of passersby, but that doesn’t seem to be the case (so far). At the very least, stop here for ease when the other booths have long lines.

What do you think of the Craftsman’s Courtyard Food Studio at the 2022 Epcot International Festival of the Arts? Wish it were a booth of dishes “imported” from the Grand Californian? Have you tried any of the food items at this booth? What did you think of them? Do you agree or disagree with our item reviews? Questions we can help you answer? Hearing your feedback–even when you disagree with us–is both interesting to us and helpful to other readers, so please share your thoughts below in the comments!