Disney Cruise Line is now planning three new ships in the next phase of expansion, which will nearly double the size of the fleet. The first two ships were previously announced last year with the above concept art.

While no new concept art depicting the seventh Disney Cruise Line ship was released, we’ve had our crack team of graphic artists working tirelessly since the announcement to bring you an accurate* rendering of how the ship should look. (*Note: rendering accuracy not entirely accurate.)

Ship names, entertainment options, design plans, and itineraries are still in development, but Bob Chapek did indicat that each of the new ships would have its own unique experiences to distinguish them from one another. Presumably, this means something more than the standard differences in restaurants, atriums, and other details that make each of the ships distinct. (At least, it sounded like more based upon what he said.)

The three new ships will be powered by clean-burning liquefied natural gas and each will be the same size: approximately 135,000 gross tons with 1,250 guest staterooms. That’s slightly larger than the newest Disney Cruise Line ships, the Disney Dream and Disney Fantasy. 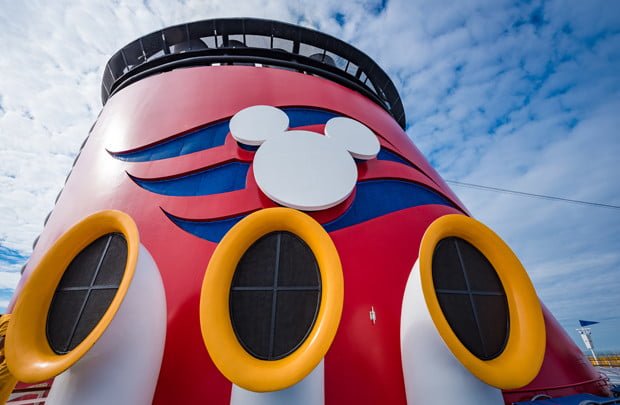 When this was originally announced, I wondered why it’d take so long. Then I did some research into the shipyard that is building these, and discovered they are at full capacity for the foreseeable future. There has been an unprecedented boom across the entire cruise industry, and one consequence has been growth among the major lines.

In essence, this means that Disney is waiting in line for a while (POETIC JUSTICE! 😉 ) until these ships can be built and finished. With that in mind, it sort of makes sense they’d add another ship to the order, anticipating future growth now and getting ahead of the line, so to speak.

I’m pleased that Disney Cruise Line is expanding even further. Clearly, the demand is there for these cruises, and having more ships should help with that. (Also, selfishly, it should make deals easier to find.)

At the same time, I have a bit of trepidation. I consider Disney Cruise Line to be Parks & Resorts’ best product, with the highest guest service standards, maintenance, and attention to detail. While I love all of the parks, I think Disney Cruise Line is the best current exemplar of the fabled “Disney Difference” of the 1980s-1990s.

Part of me worries that such rapid expansion–nearly doubling the size of the fleet–will spread Disney Cruise Line’s talents too thin, and in the process, dilute the brand. I really don’t want standards anywhere to slip, as I think that’s such a big part of what makes Disney Cruise Line appealing.

I’m not suggesting that this will happen, or even that I expect it to happen. It’s just a concern, and not an unreasonable one given what can happen as business units go from their lean stage to a more bloated, larger scale. Hopefully, that does not occur here.

So far, all of the growth that has occurred with Disney Cruise Line has been (I think) for the positive. While I’m a more recent fan of the cruise ships, I prefer the newer ships to the older one, and I think Disney has learned some lessons as it has gained more experience in the cruise industry, allowing the company to iterate on past designs and make technical and functional improvements in the process. If that trend continues with these 3 new ships and Disney Cruise Line maintains its exceptional guest and soft services, the bar will be raised even further.

What do you think of Disney Cruise Line adding three new ships to its fleet? Do you share any of the same excitement or concerns as me? Have any name ideas for the new ships? Any other thoughts or ideas about this? If you have questions or thoughts, please share them below and we’ll try to respond!