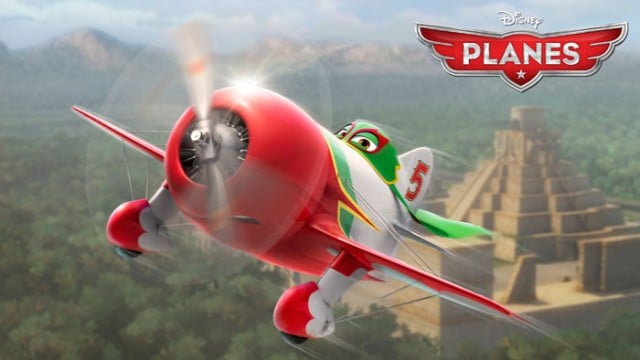 Going into it, I really wanted to hate Disney’s Planes. It’s a DisneyToon Studios release of a film set in the “Pixar Universe,” and it was clearly pitched as a way to sell merchandise. It was originally a direct-to-video title that was bumped to a theater release (I assumed) as a way to sell even more merchandise.

After only the first 10 minutes of Planes, I began to think that maybe merchandising wasn’t the only reason that it was bumped to a theatrical release. While “Planes” was not a great movie, I did not hate it. For what it is, and given my very low expectations, I was very pleasantly surprised. It’s a very formulaic story with minimal character development, but it never really misfires or becomes outlandish a la Cars 2. It’s simply a cute story that progresses exactly how you expect it to progress (with a few sly nods to classic aviation films).

My real complaint with regard to the story is that not enough time was spent fleshing out the characters and certain plot points. A couple of characters do make an impact, but the remainder just rest on tropes about certain nationalities. The plot similarly does the bare minimum to explain the why of where it’s going next; it’s very easy to understand, but there are a few points where the rationale for certain actions could be expanded upon just a bit to make it more cogent.

On the plus side, I was surprised to find a few endearing and scene-stealing characters (my favorite of whom is pictured above). I normally find Dane Cook intolerable, but even he was fine as the lead. I was also a bit taken aback at humor that works on multiple levels at times, and there are no cheap jokes that drag Planes down (one of my biggest complaints about Brave). Overall, with regard to story, it’s nothing earth-shattering, but it’s far superior to what Disney has done with previous direct-to-video releases.

In terms of visuals, Pixar films are known for their gorgeous look, whereas direct-to-video titles are known for sloppy, outsourced animation. This falls somewhere in between the two, with visuals that are sometimes gorgeous and sometimes border on overly simplistic. At no point does it reach the level of depth and detail expected from Pixar, but it also never looks like a direct-to-video title. The ‘hangar farm village’ in the opening scenes is pretty, but underutilized. Other exotic locales are similarly underutilized.

What I think is most unfortunate about Planes is that Disney didn’t choose to devote more attention to Planes and release it under the flagship Pixar label. Whether they like it or not, the egotistical brain-trust at Pixar must realize that this movie will forever be associated with Pixar by general audiences, even if it’s not a Pixar film. Given that, why not devote their time and attention to it so that it, at least visually, is up to their standards? It’s not exactly as if they bestowed a classic piece of cinema upon the world with Cars 2, so I think at this point the ship has sailed on not associating themselves with mediocre films. In fact, I would have gladly taken a dressed-up version of Planes over Cars 2.

Planes is already being ripped apart by critics (it currently sits at 24% on RottenTomatoes), but that score doesn’t tell the whole story. Critics are also giving it a 4.7/10 score on average (24% approval normally doesn’t equate to that high of a score), and 69% of audiences have liked it. I’m not one to trust audience opinion, but it would not surprise me at all if many critics are dismissing the film out of hand before even seeing it because of its roots and original “purpose.” Its original purpose is no doubt disappointing, and that Disney continues to prioritize merchandise sales above quality is really disheartening. However, regardless of Planes’ roots, it’s not an awful film. If you go in with an open mind, you’ll find a movie that, while entirely predictable, is fairly enjoyable for parents. As for kids, they’ll likely love it…and demand hundreds of dollars worth of Planes toys afterwards.