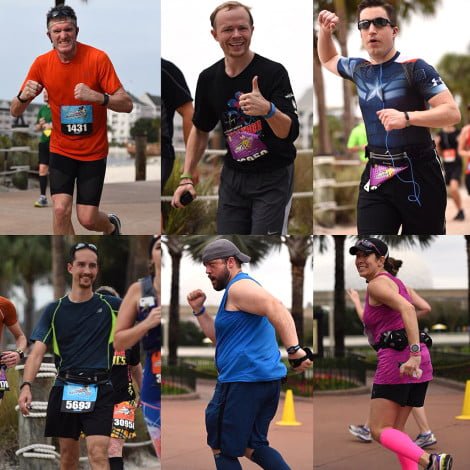 In Part 2 of our Walt Disney World Christmas Trip Report, I stressed the value of the friendships I’ve made through the Disney fan community. This has never been borne out as well as it was on the home stretch of the Walt Disney World Marathon, as we headed into Disney’s Hollywood Studios and then onto Epcot.

Every morning of the Dopey Challenge, I had friends out there both participating and cheering. Oddly enough, this group of friends is from the Disney photography community, a sub-niche of the Disney fan community. What does photography have in common with running?

Well, it turns out that when you regularly carry 20+ pounds of camera gear around on your back while walking 10+ miles per day at Walt Disney World, you’re pretty much glutton for punishment. The next logical step is thus running around in circles for 10+ miles at 5 a.m., and then carrying around a bunch of camera gear for the rest of the day! Who knew?!

In some cases, I’ve known these people since around the time I first got into photography and started posting on Flickr back in 2008. Others I’ve met more recently, but all of them are photographers, and each of them participated in at least one event over the course of Marathon Weekend. (Plus, of course, my lovely wife, Sarah.)

Pictured above is just the selection of Marathon runners: Cody, (me), Mark, Kevin, Adam B., and Jenny in a photo by Brett. Not pictured are Katie, Adam H., Rebecca, Carrie, and Diana (phew, I think that’s everyone). 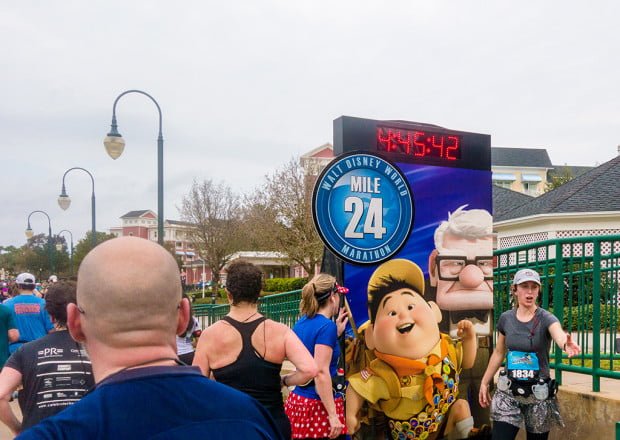 I don’t have any photos from Disney’s Hollywood Studios, but that’s for good reason: I was actually running through the park!

My calves were giving out and I had found a medical tent with biofreeze, so I pulled up my compression pants and caked the stuff all over my legs. This forestalled the inevitable muscle failure for at least a couple of miles, and I was good to go for a bit. 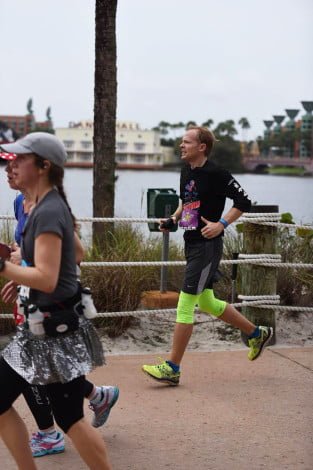 I started to slow again heading towards the Yacht and Beach Club. About the only thing that got me running again was seeing some friends–I don’t like to walk past people I know, as it makes me feel weak. 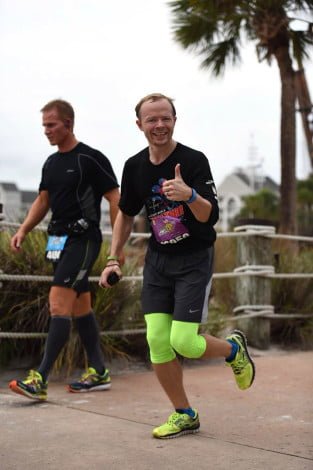 I might be flashing the thumbs up there, but I can assure you, I’m crying on the inside. (Photos above by Brett.) 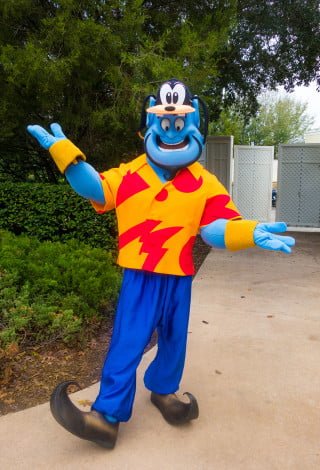 Entering Epcot, I noticed there were a few rare characters out, none of whom had lines! I assume this is because people just want to finish as quickly as possible in the home stretch, but also because I had worked my way past most of the “doing it for fun” crowd into the runners who care more about their time.

This makes me think that if I submit a time and get placed into an early corral for the next race, I can actually have my photo taken with characters, instead of just snapping shots of random strangers as I pass. (On a side note: I really regret not getting my photo with Genie–he seems like the perfect mascot for this blog in that outfit.) 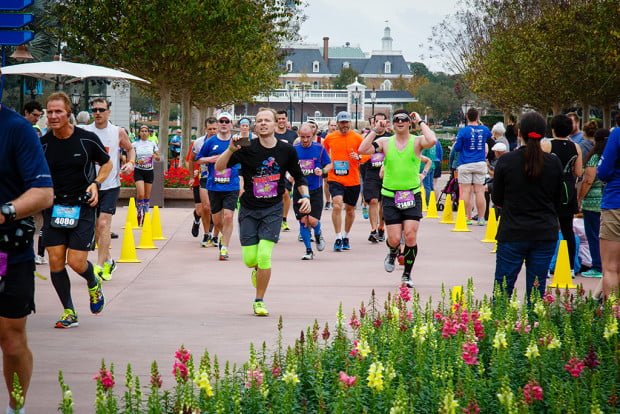 On the final stretch in Epcot is where things really get exciting. (Above and below photos by Ben and Katie.) 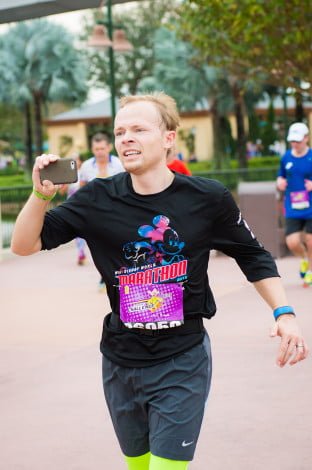 No, I’m not recording video, black box style, so the authorities have a record of what happen to me when I die on mile 25… 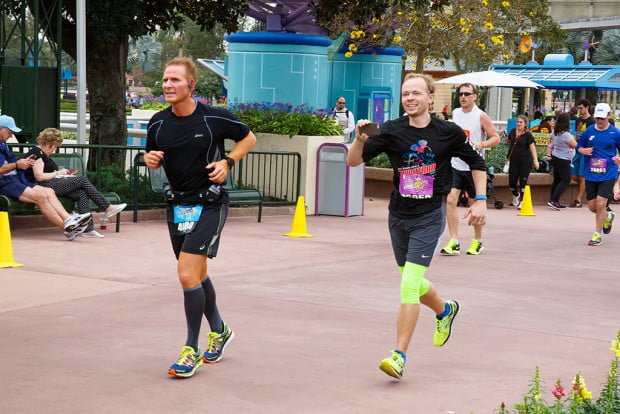 I actually look happy here, and that’s because I AM FOR SOME REASON. 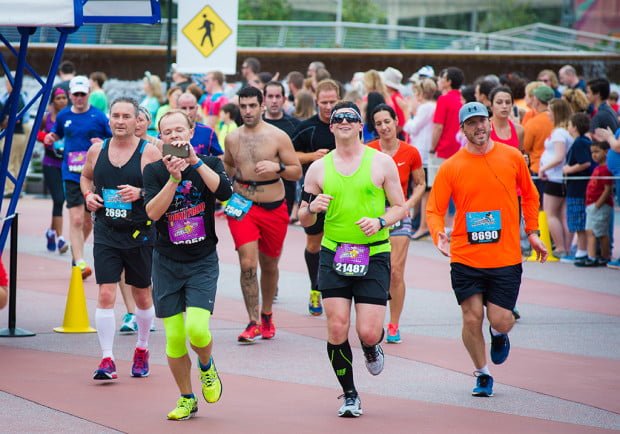 I can only assume that my brain released a surge of dopamine to counteract the pain that my body was reporting. 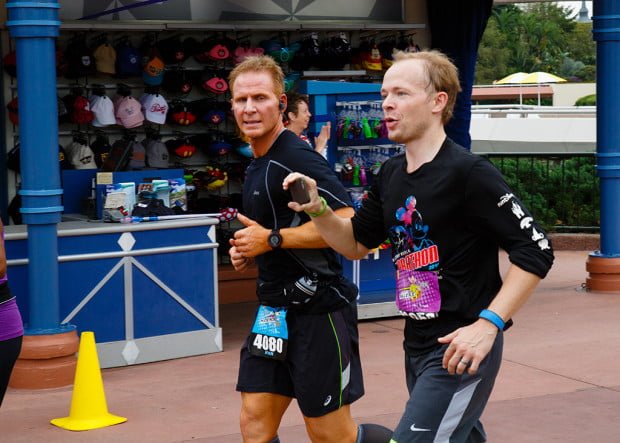 This dude next to me clearly wonders what’s up. “Why is this weirdo running with his phone up? Is he social media’ng? And why is he whistling while he runs?! I’d better get away from this hooligan before all hell breaks loose.” 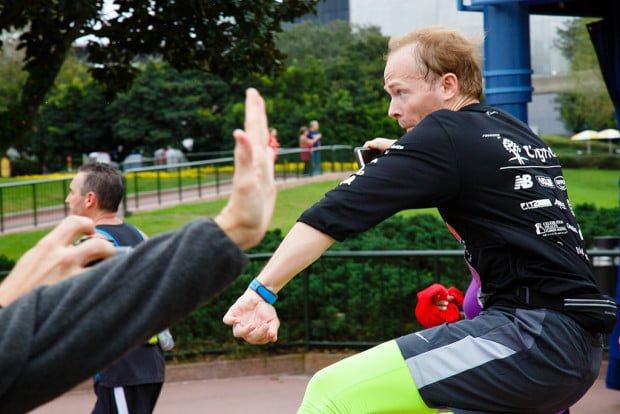 Okay, here is where I think I basically blacked out and let instincts take over. I saw Adam in the distance and knew I must demonstrate to him my epic kung fu prowess with a flying kick.

FEAR DOES NOT EXIST IN THE EPCOT DOJO, DOES IT? NO SENSEI!

It might surprise you to learn that I have no formal martial arts training. 😉

Honestly, I have no idea what I was thinking here, and given that I could barely pick up my legs without cringing in pain only a couple miles back, I am shocked that I landed this kick and managed to keep running in stride. As Rick James would say, Biofreeze is one helluva drug. 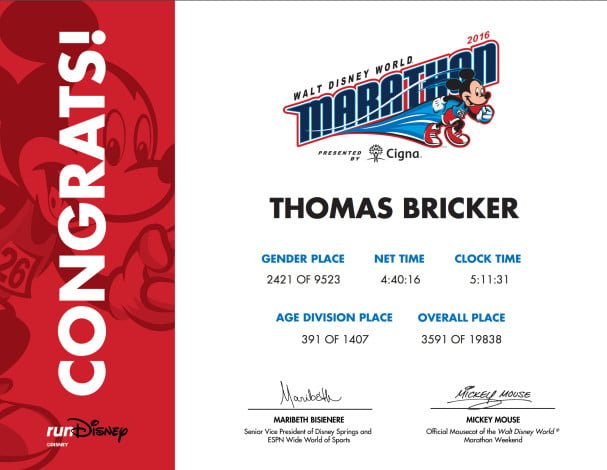 I really don’t know how I did it, so I’m just going to go ahead and assume that running the 5K, 10K, and Half Marathon provided the perfect 3-day training plan for the Marathon. If you’re looking for a training plan, I plan on packaging all of my “wisdom” in a convenient program called the “Couch to Couch” in 9 weeks plan (no relation to the Couch to 5K plan), available for the low, low price of $99. 😉 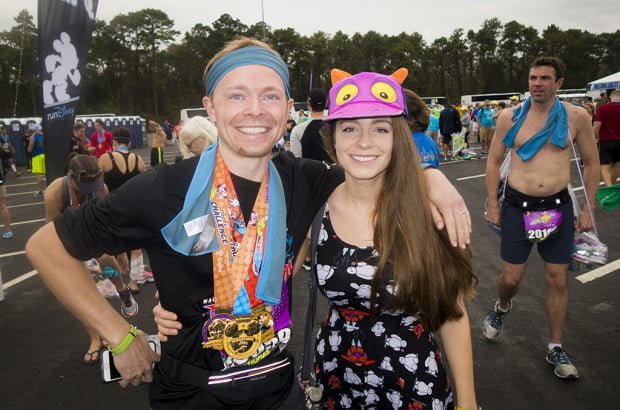 Sarah gave me a hero’s welcome at the finish line, as I darted over, dipping and enthusiastically kissing her in what was basically a reenactment of V-J Day in Times Square. Or…I hobbled over to her, barely able to walk, and nearly collapsed. Let’s just pretend it was the former, though.

(Oh, and you’re welcome for posting the version of this photo with shirtless angry dude in the background. I had one without him, but I’m all about GIVING THE PEOPLE WHAT THEY WANT. 😉 ) 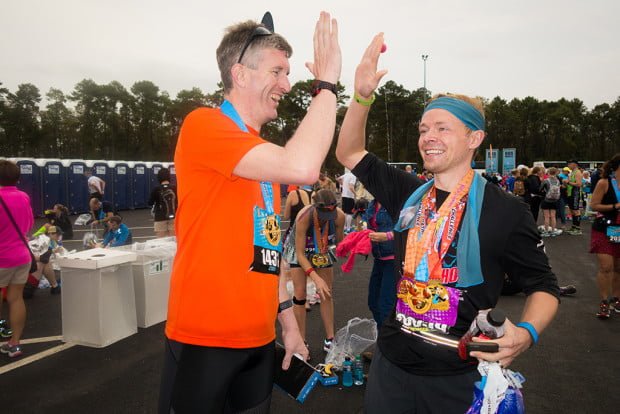 We met Cody at the finish line (Cody is like 8.5 feet tall, I’m not super-short) after I had headed to the Merchandise tent to buy an “I Did It!” shirt. Unlike the Disneyland Half Marathon, they had tons of merchandise available for purchase. Woo hoo!

Overall, I had a lot of fun running the Walt Disney World Marathon, and will definitely be doing it again next year. Running through the parks is nothing short of awesome, and the crowds of cheering spectators are more energizing than you can possibly imagine (so thanks to all those who came out and cheered, friends and strangers alike).

There were some sections of the course that definitely could have used more entertainment to raise the energy level, but that’s a minor quibble, and I fixated on it at the beginning more because I’m worried about this being a gradual trend based on past experiences, and I really don’t want to give up on runDisney in a couple of years. Running is far from my favorite thing in the world, so the fact that I now find myself somewhat addicted to these events really says it all.

I’ll be back tomorrow with a recap and some parting thoughts on the Dopey Challenge as a whole. If there’s anything in particular you want to know, ask in the comments here, and I’ll try to address it in that post.

If you enjoyed this post, we would really appreciate it if you would share it via social media, or leave a comment below. We put a lot of work into this blog, and hope it’s entertaining and/or useful to you! 🙂

Did you run the Walt Disney World Marathon this year? Did you karate kick your way to the finish? What motivates you to power on through the tough stretches of the course? Any additional thoughts on differences in on-course entertainment through the years? Thinking of doing a runDisney event and have questions? Share in the comments!