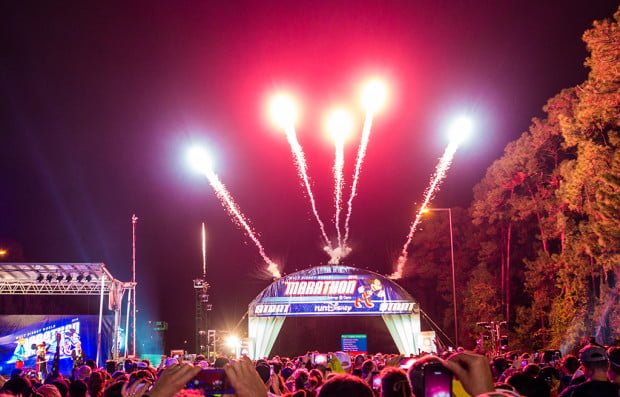 The next day was the main event, the 2016 Walt Disney World Marathon. After feeling some pain at the end of the Walt Disney World Half Marathon, I decided to take it easy the previous afternoon. Well, if I’m being honest, it’s more like the weather forced me to take it easy. We had headed to the Magic Kingdom to get some attractions in and do who knows what else, and it started pouring in the late afternoon, killing the prospects of yet another sunset.

We were at the Tomorrowland Transit Authority PeopleMover when it started raining, and for the next few hours, we bounced back and forth between that, Carousel of Progress, and even Monsters Laugh Floor (which we really enjoy–but I know we’re about the only ones). By the way, big shoutout to the incredibly rude Cast Member at TTA, who I repeatedly heard yell “hurry up, keep moving!” to parties who were moving too slowly for his liking. Disney magic at its finest.

This rain was probably for the best, as I even though I knew I needed to take it easy that afternoon, “logic” and “thinking” both go out the window when I’m chasing the light for photos. I operate on a purely instinctual level, grunting and growling as I pursue my photographic prey.

As for the morning of the Walt Disney World Marathon, I was up bright and early just before 4 a.m., showering and getting ready as quickly as possible before requesting my Uber. Now, it wouldn’t be a good trip report without a bit of drama thrown in for good measure, so here it is. The Uber was 10 minutes away, which is higher than the norm, but no big deal. I gave myself a little cushion.

I waited and watched the driver’s progress. A little over 10 minutes passed, and he was pulling up (on the map) right on schedule. Until he didn’t, but instead kept driving. After 5 minutes, he appeared to be parked at the edge of a lake(???) nearby per the map, so I called. He had gone to get gas without letting me know. Uh…okay. Ten more minutes passed, and he was still there. Of course the day of the Marathon I’d have my first issue using Uber at Walt Disney World. Of course.

Due to road closures that would start soon and delay traffic, I was starting to freak out a bit at this point. Then, out of nowhere, a car pulled up next to me and the passenger rolled down the window and asked if I needed a ride to the marathon. I kid you not. Now, I follow @FloridaMan on Twitter, so I knew this could be start of a comically horrific headline, “Florida Man Traps Blogger in Car, Flinging Feces to Defend Honor of Dino-Rama.” There was a baby in the backseat and the people didn’t look like feces-flingers, so I decided to roll the dice.

Given that I’m writing this today, you know I wasn’t abducted or anything. We only hit minor traffic hiccups, and managed to make it through areas that would close about 5 minutes before they were scheduled to do so. From there, it was off to the corrals… 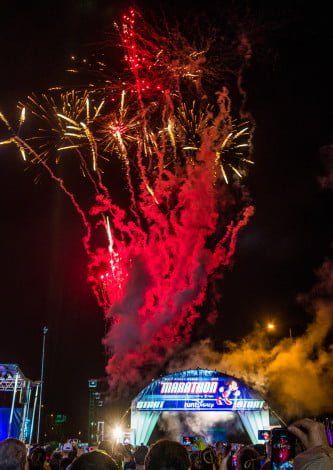 It was fun to listen to the announcers talk about all of the serious participants (mostly from Brazil and Chile) in the early corrals, and others who were running for a cause or overcoming adversity.

To my knowledge, these same announcers call all of the runDisney events, and I think they do a pretty good job. They’re family-friendly, but still funny. Certainly helps pass the time when you have to wait for Corrals A through N before you start! 😉 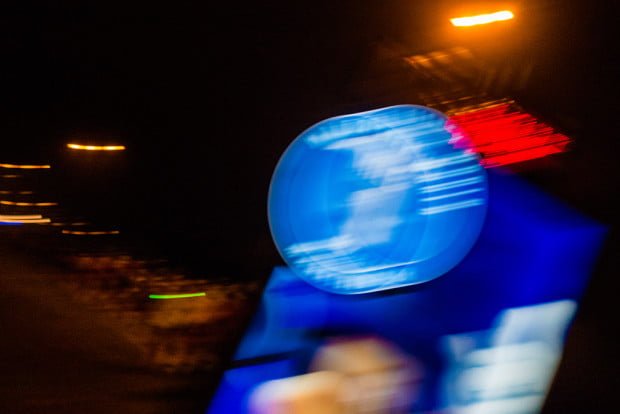 You can see we’re already off to a great start with the photography this time around! Not that the photos in these reports are anything special to begin with, but what you don’t see with the finished product is just how bad the vast majority really are.

Photos that are blurry from movement, photos with random, stray runners awkwardly contorted, photos that are totally out of focus, and photos inadvertently taken of the ground or up my nose due to my accidentally pressing the shutter while running.

I try to stop as briefly as possible so photography doesn’t negatively impact my run time too badly. I’d probably be better off stopping longer to make sure the shot is good, but fewer times. Quality over quantity and all of that. 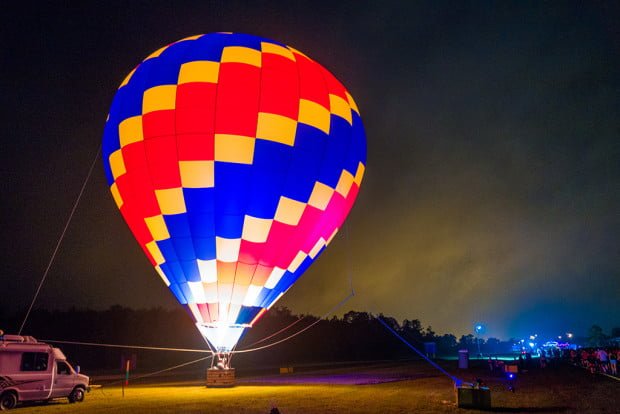 When it comes to this balloon, you know I’m stopping to take my time and get a photo I like! I know I shared a photo of this in the Walt Disney World Half Marathon Report, but balloon photos are like bread cat photos–any reasonable person simply cannot get enough.

I know Disney has hot air balloons of Mickey Mouse, Donald Duck, and Cinderella Castle, and it is on my photography bucket list to get shots of them. If I knew these balloons were going to be out, I’d run the full marathon with my DSLR and tripod! (If someone from runDisney happens to be reading this, please make it happen. PLEASE!) 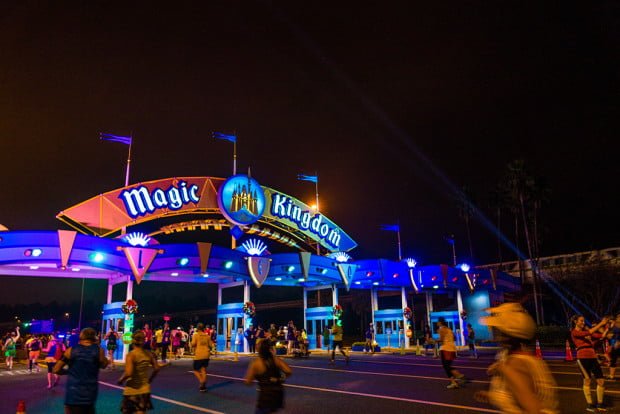 Although the photo quality doesn’t bear it out, I also paused here to wait for the the monorail to enter the frame. Every photo is better with a monorail. 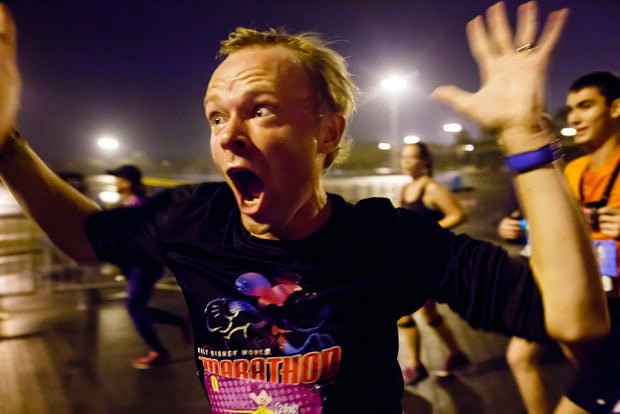 At the Ticket & Transportation Center, I spotted some friends who were cheering on me and other runners in our group. Based on my reaction in the photo, you’d think I just got the winning Powerball ticket.

In reality, I was going in for a high five on Adam Hansen. He can vouch for this, but even running in stride, I can deliver some excellent high fives. The crisp, on-the-money kind that are really rewarding because they make you feel alive. (Thanks to Katie Hansen for the crazy/awesome photo above!) 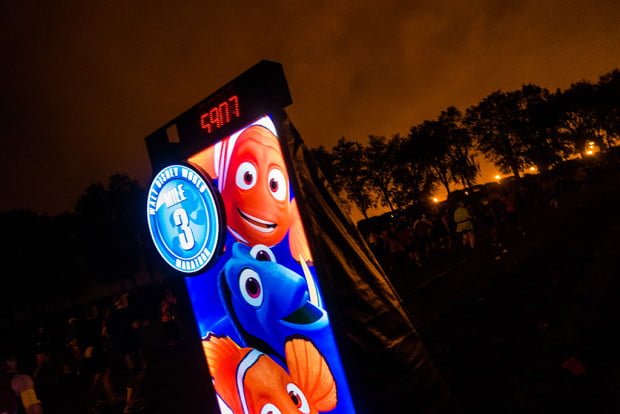 Having people there to cheer you on is a really motivating component of running, and makes me understand why people love running groups so much. Even if it’s not people you know–just people who read your name off of your bib and feel like you could use an extra push–it really helps keep you moving.

This is such a big X factor when it comes to running in these events, and I think it’s impossible to fully appreciate it until you’re actually out there, running. At home when I run, I can barely do 2 miles before needing to alternate to walking. At a runDisney event, I can do 10+.

And with that, it was time to enter the Magic Kingdom again…