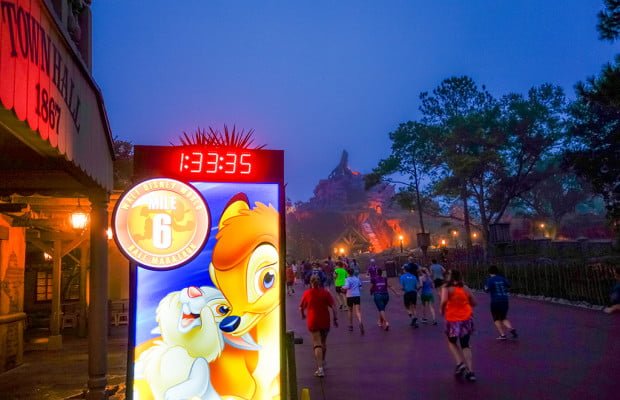 After a wet 10K the previous day, it was time for the Walt Disney World Half Marathon. The biggest downside to doing the Dopey Challenge (see our Dopey Challenge Recap post for reports on every individual race) is getting up at or before 4:00 a.m. for 4 consecutive mornings. This is even worse than the running itself. People had warned me of this, but like most warnings I receive, I failed to heed them. I’m like a petulant child: if you tell me something is a bad idea or that I shouldn’t do it, I’ll probably do it out of stubbornness.

You could say that coming from California made this 4 a.m. wake-up easier, as it was really like a 1 a.m. wake-up, which is basically like not going to bed at all! Yeah, you could say a lot of things. (For instance, a scurry of squirrels make fine pets.) It doesn’t make them true, though. I’m not so sure I subscribe to that line of thinking, in this case.

Regardless, the upside to all of these events starting in the wee hours of the morning is that they are finished pretty early in the morning, too. You’re done with your run, feeling like it’s roughly midday, and you check the time only to learn that the parks aren’t even open yet.

After the unpleasantness of the rain during the 10K and my adventures in outlet mall shopping, I smelled roughly like a wet Saint Bernard mixed with an Alaskan Bush Person. It was bad. I headed back to Floridays to shower off the stink, and lied down for a while, but couldn’t sleep. I knew I should rest my body so I wouldn’t encounter problems with the Half or Marathon, but I needed some Epcot time.

The storm that brought the rain broke right about the time we got to Epcot. This isn’t a trip report, so I’m not going to fixate on the details of the day in Epcot, save for saying we had a blast. Rather, this non-runDisney portion of the day is mentioned to highlight yet another mistake I made (at this point, more apt titles for my runDisney posts would probably be “Tom’s Misadventures & Missteps in Running: Volume XII” and so on…).

I mentioned in the Walt Disney World 10K Race Report that I’m a “puddle fiend.” While somewhat accurate, I’m actually more like a Photographic Raccoon: distracted by and drawn to any “shiny” photo subject. In the case of that afternoon, the shiny object was a beautiful sky and gorgeous sunset. I found myself running all over Epcot trying to capture the light. 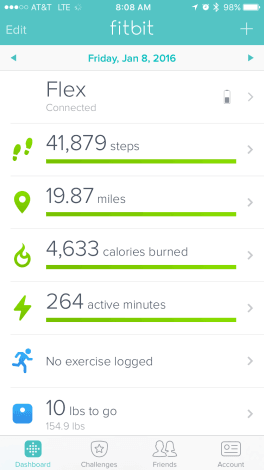 The result was that, by the end of the day, I had logged almost 20 miles and 40,000+ steps. Probably not the wisest decision with nearly 40 miles to run over the course of the next two days, but whatever. I regret nothing. I got to shoot a beautiful sunset and take a nice stroll from Epcot to Disney’s Hollywood Studios for those awesome Symphony in the Stars fireworks. (In retrospect, I’m glad I did all that moving, as it was the only nice sunset of the trip!)

Anyway, the next morning. I requested my Uber earlier this morning, as I was concerned that road closures might cause delays. They didn’t, and I arrived with plenty of time to spare. All of my friends were in corrals way before me because I had again forgotten to submit proof of time and had been put in one of the last corrals, so I just sort of paced around.

The worst thing about being in one of these late corrals if you’re running is that many of the people in front of you are walking. Unlike many rude runners I encountered (I’ll cover this in depth in the final recap), I have no qualms with this. RunDisney events are designed for people of all skill levels. It’s my fault that I didn’t submit a proof of time.

However, when I saw a flood of people from my corral to the K Corral next to me, I decided to join. Yes, I *gasp* broke the rules. If I’ve crushed your view of me as a positive role model and beacon of light for the children of the world, well…it was bound to happen sooner or later.

I view this as a victimless crime, as my first mile times in every single runDisney event I had done prior to this had been slow due to me having to weave through crowds. It’s a better experience for everyone involved if faster participants are in the earlier corrals. (Note: the clock still starts ticking on my time when the tracker in my bib crosses the start line, so it’s not like I gained a time advantage.) 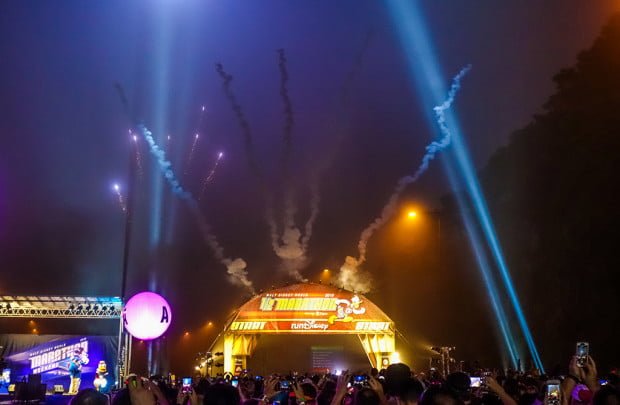 Corral K is still pretty far back, and I still spent much of the first several miles dodging people, so it ended up being only a minor gain. Still, it helped. 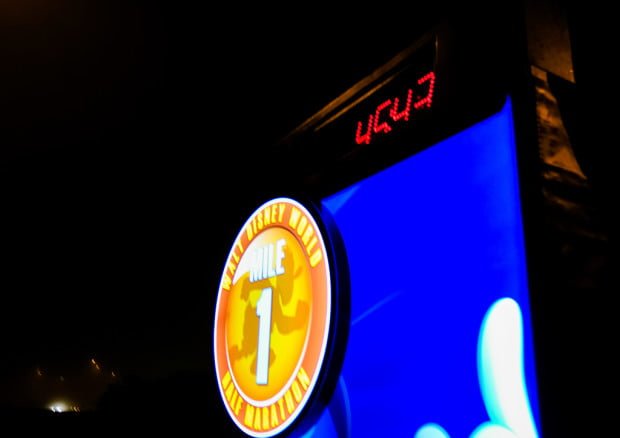 Since carrying my DSLR was more of a hassle during the 10K than I anticipated (who’d have thought?!), I decided to carry my Sony RX100mkII point and shoot during the Half Marathon. While it’s a very capable little camera, it’s not the best for low-light, handheld shots…while running. Consequently, many of the photos here are for pretty bad (see above), and are only for illustrative purposes. 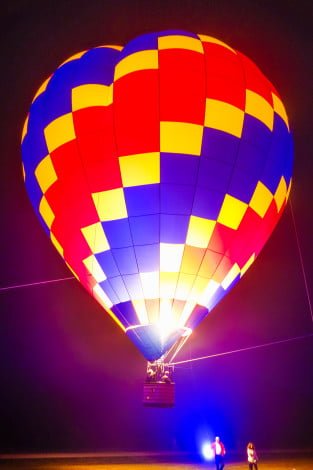 My favorite piece of on course entertainment by far during the Walt Disney World Half Marathon was this balloon. Seriously, so cool to see. For the next couple of miles, I found myself daydreaming about running a marathon in New Mexico or somewhere with a bunch of balloons floating overhead.

Everyone knows that soaring balloons are super-motivational, so I can only imagine that every runner on the course would set a PR. That, or everyone would be so mesmerized by the balloons that they would stand in place and get swept. It really could go either way. (It turns out that such a race actually exists, albeit in Texas.) 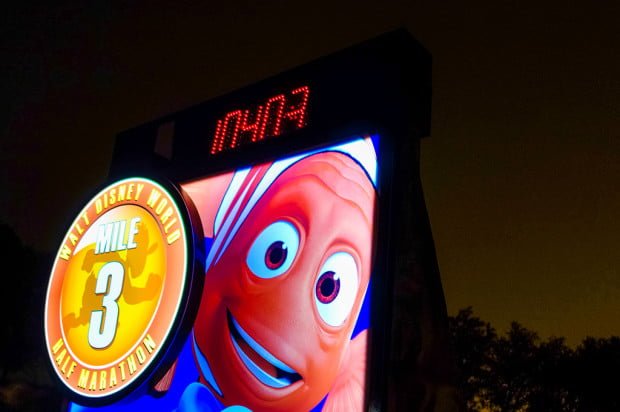 I took photos of almost every mile-marker, and in the past I’ve posted them all to “prove” that I ran the whole way, but the photos are a bit redundant and boring, so I’m not going to do that this time. If you think I cheated because of this lack of proof, well…MAYBE I DID! I mean, I’m a corral-jumping rebel, after all. 😉 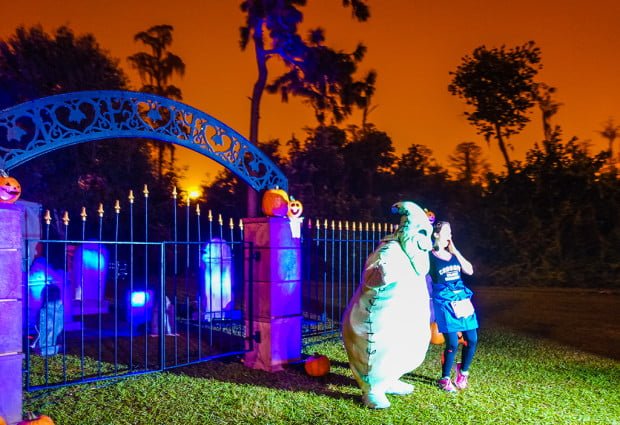 Oogie Boogie had a pretty cool meet & greet set-up, but the line was approximately 6 hours long by the time I got here… 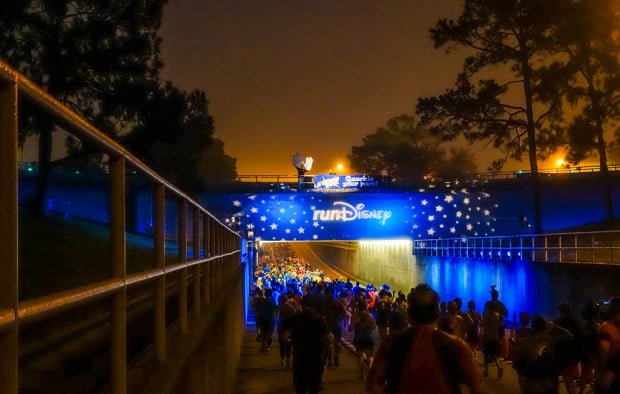 There are several DJs on the course, and I have to say that this one is my favorite. He always wears these giant gloves and has a contagious enthusiasm. The best on-course entertainment really helps you push onward, and he is a sterling example of that, so kudos.

Oh, on the topic of DJs, I think I heard the song “Shut Up and Dance” like 10 times over the course of the 4-day Dopey Challenge. That’s fine, I really like that song (I’m not normally a fan of contemporary pop music, but there’s just something about this tune). For whatever reason, the song has been remixed with this different beat on top of it or something to make it sound a bit like club music. What the heck is up with that?! It’s like applying an Instagram filter to an Ansel Adams photo. What’s next, Stairway to Heaven remixed with a Flo Rida beat to make it “relevant”?!

Okay, that was totally irrelevant to a runDisney post, and probably makes me sound like an old man shaking my fist at the kids these days, but I swear the rest of this Race Report on Page 2 will be (mostly) relevant.

Click here for Page 2, as the Walt Disney World Half Marathon enters the Magic Kingdom!