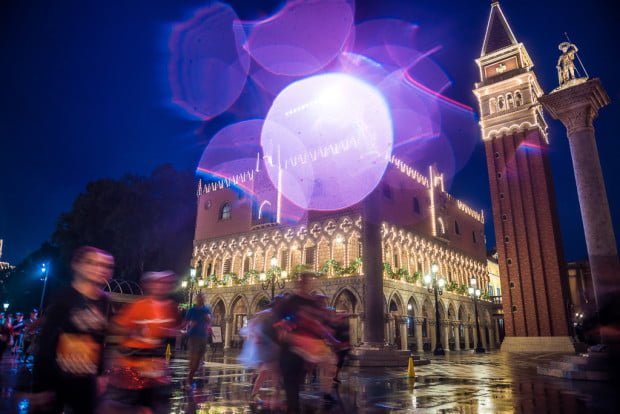 The next morning of Walt Disney World Marathon weekend, it was time for the 10K. At just over 6 miles, I wasn’t really worried about this race, either. The Family Fun Run 5K had gone fairly well, and even without proper training, I could jog 6 miles without much strain. Plus, I had been advised by others doing the Dopey Challenge to take it easy during this race to avoid hitting a wall in the full Marathon later.

So, in my infinite wisdom, I decided to stay up late the night before and have a late dinner at Morimoto Asia after the parks closed. The meal was insanely awesome (review to follow), so it was worth it from that perspective, but that 4:30 a.m. wakeup call came way too early. I quickly got ready and headed out the door.

In yet another brilliant move, I decided to take my Nikon D750 DSLR and 24-70mm f/2.8 lens again. The only (well, not the only) problem was that I had not looked at the weather forecast. After racing downstairs from my hotel room to catch my Uber, I realized it was raining–and I didn’t have time to go back to drop off the camera since I was already running late.

Whatever. It seems “making poor decisions” has become something of a forte of mine, so I just decided to roll with it, and improvise an acceptable solution along the way. It was only sprinkling lightly at the time, so perhaps it would stop raining altogether. Ha! 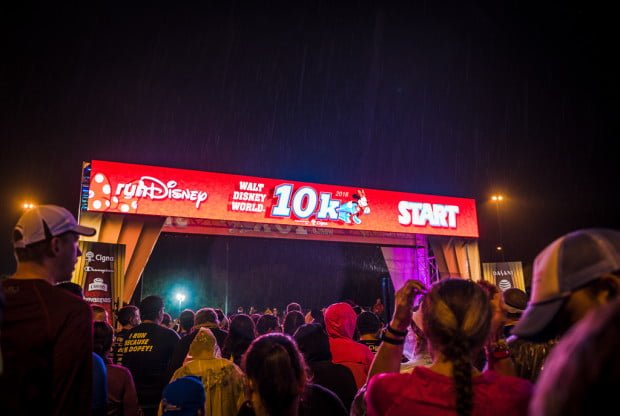 The rain only intensified as I waited in the corral, and I knew simply covering the camera with my hand was not going to suffice as a strategy for keeping it dry. The D750 is weather-sealed and I’ve exposed it to snowstorms and sandstorms, but I still don’t trust the sealing when it comes to rain.

As we started, I noticed someone discard their poncho, so I grabbed it off the ground and tore it apart, tying it around the camera in different spots to fashion something of a makeshift rainsleeve. Given the circumstances, what I made was actually pretty effective and well-done. 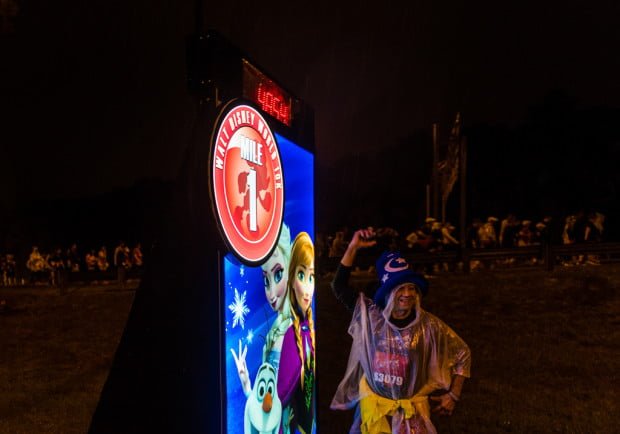 Anyway…the race itself. This run sucked. It various times, the rain was really coming down, which caused some of the on-course entertainment to disappear. For example, there was an airplane sitting out that clearly was a character spot, but when I passed it, it was empty.

Turns out that earlier, Darkwing Duck and Launchpad had been there! As a child of the 90s and lover of things that are awesome, Disney Afternoon characters are the holy grail of rare meet and greets for me. 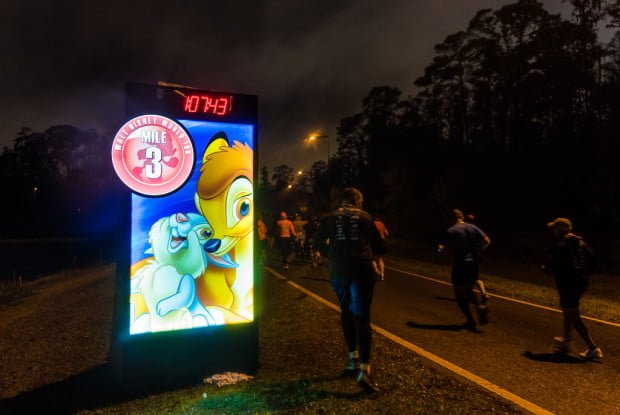 Not only was the course mostly devoid of entertainment, but it was thoroughly wet. (Hence the poor quality of the photos here, as I was trying to zip past and shoot through the makeshift poncho in the rain.)

Normally, I try to run on the grass or dirt along the edges of the road to save my knees as much as possible, but I realized that wouldn’t be an effective strategy this particular run as I stepped in a huge puddle in the grass near the beginning of the race. 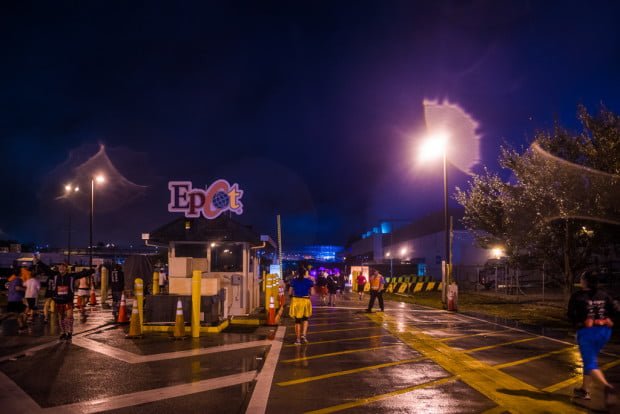 That’s enough complaining, though. Once we got past the first couple of miserable miles running through pretty much nowhere, we entered Epcot. That was a huge relief. You really fixate on the rain when running through long stretches of nothingness, but it takes a mental backseat once you’re in a cooler area. 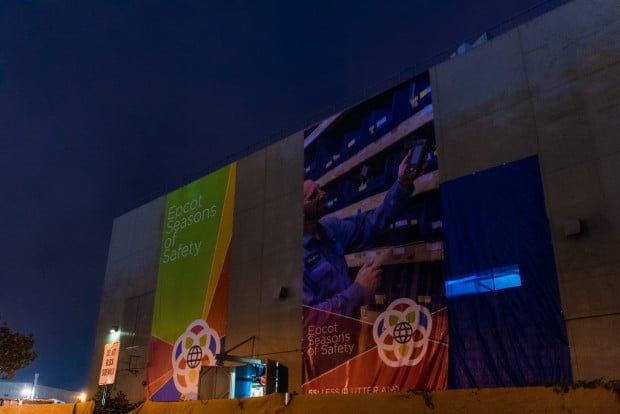 For a Disney geek like me, seeing the backstage areas of Epcot was just what I needed to take my mind off the rain. The constant internal grumbling of “why the heck did I sign up for this?!” quickly changed to “I’m running through Walt Disney World, how cool is this?!” 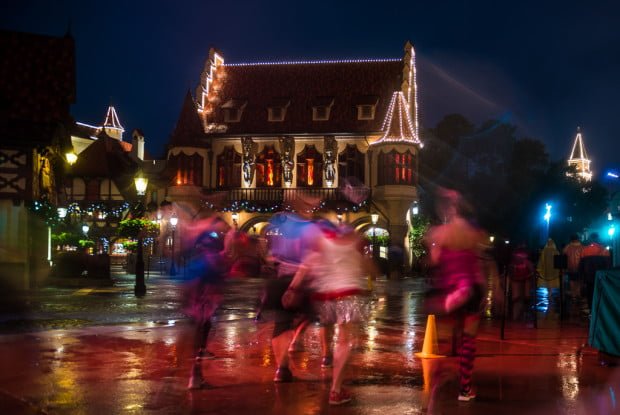 When the course entered World Showcase, the huge upside to running in the rain became apparent to me. With rain comes puddles, and I’ve never met a Walt Disney World puddle that I didn’t want to photograph. If ever you’ve spotted some crazy person with their DSLR on the ground at the edge of a puddle late at night in Walt Disney World, that was probably me. You could say I’m a puddle fiend.

Doing this during the race was really tough because my lens had water beads on it, and I had literally no way of getting rid of them. Every inch of fabric on my body was soaking wet, so short of making a pit stop in an Epcot restroom for some paper towel, I didn’t have many options. I decided to just shoot through the wet lens, and have the droplets add a bit of moodiness or ambiance to the shots… 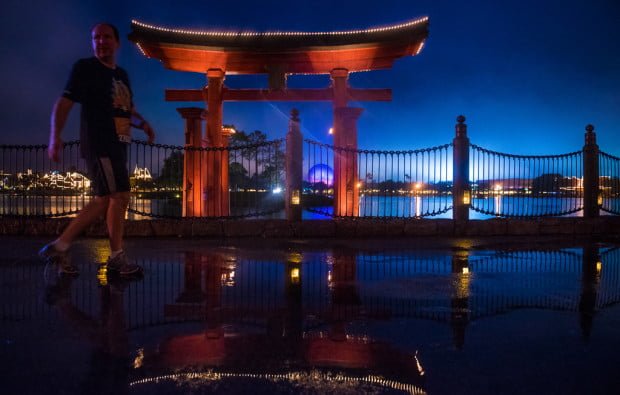 It certainly didn’t help my total time, but I found myself stopping constantly throughout World Showcase to capture photos. None of these are anything I couldn’t do 10 times better on any given wet night in Epcot, but I felt it was a unique opportunity to document the combination of Epcot in the rain plus the race. Whenever possible, I tried to capture runners in my shots. Sort of a hybrid of landscape and documentary photography. 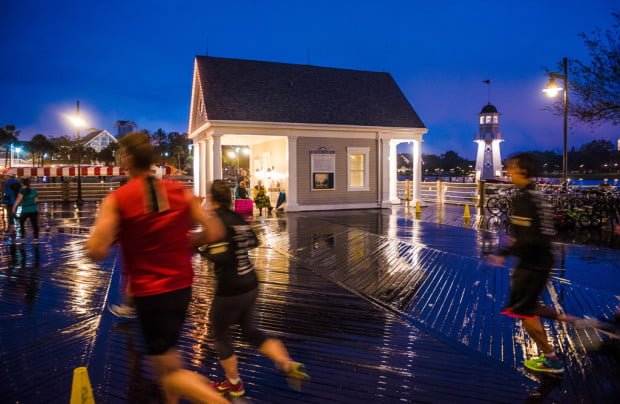 This made for a really fun experience, and although it’s probably crazy, in hindsight I’m a bit glad that it rained that morning. I didn’t feel that way then, but it made the race quite memorable! 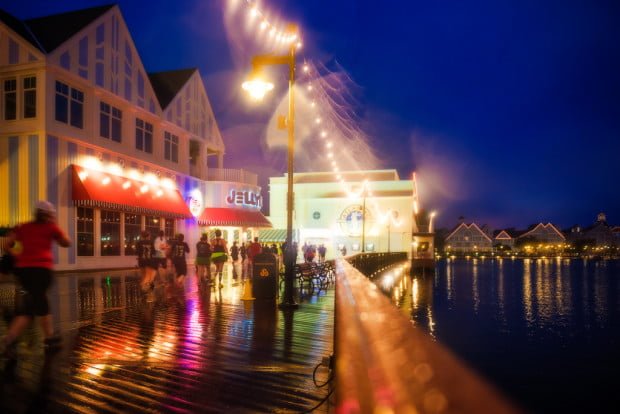 Plus, I just love the Epcot area in the rain (and in the dark). It feels like it adds to the ambiance of resorts and World Showcase.

It also added to the difficulty level of the race. Not only did you have complete 6 miles, but you had to do so on some very slippery surfaces while dodging puddles. This required some added running strategery, as they say. 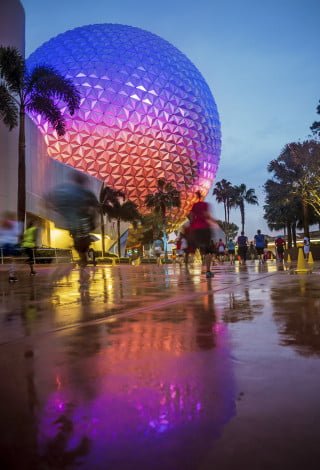 The last leg through Future World was pretty fun as the rain had mostly stopped by this point and it was still dark enough for some cool blue hour shots. With the finish line in sight, though, I was torn between getting a good time and getting good photos. 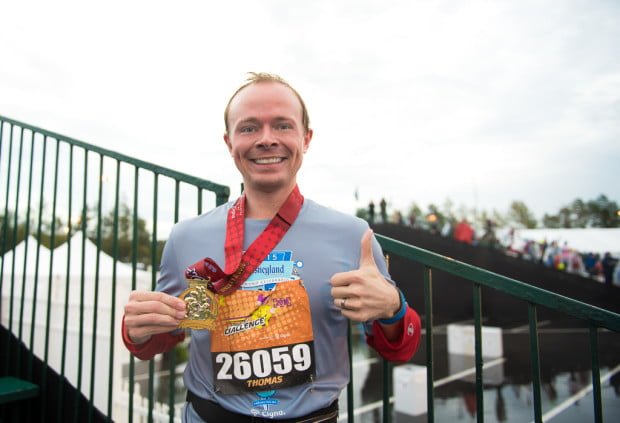 I ended up finishing in 1:00:42. Given that I’m not a runner, it was raining, and that I stopped for photos, I was reasonably happy with that time. It reminded me that I need some sort of running watch, as I thought I was going to finish under an hour, which is why I didn’t stop for more photos at the end. Had I known I’d be over an hour, I would’ve stopped for a lot more. What’s the difference between 1:00:42 and 1:05:00?

After finishing, I headed back to the finish line, where some friends had been cheering me (and others) on, and we waited for other people we knew to finish. Right about then, the rain started again. Being soaked head to toe, I decided that I probably shouldn’t get an Uber directly from Epcot, so I headed to Port Orleans French Quarter and cleaned up there before getting an Uber.

I took the Uber to the Orlando Premium Vineland Outlets, which is right next to Floridays where I was staying, because a few of you have bellyached about my choices in running shorts. Normally, I avoid outlets at all costs. They are a scam designed to appeal to brand-obsessed, budget-conscious shoppers. The vast majority of the time, merchandise sold at outlets is made specifically for the outlets–it is not past-season or overstock (Gap Brands, J.Crew, Saks, Nordstrom, Neiman Marcus, Coach, and many, many other stores are all among the offenders). It’s lower quality stuff that brands slap their labels and ‘compare at’ stickers on, but really, those “comparisons” aren’t apt since the same materials aren’t used. It’s a ruse, and the discounts are illusory.

In any case, I was at a loss for other options, so I waited around for the Nike Outlet to open, and then grabbed a pair of running shorts there. I also stopped in the Disney Outlet (which is awesome–all overstock theme park merchandise!) and picked up a 2016 attraction poster calendar for $5. If not for a lack of room in my luggage, I likely would have bought a few more things there. 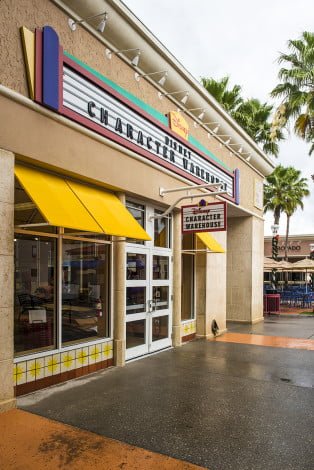 Did you run the Walt Disney World 10K this year? What did you think of the rain? Any questions? I’d love to hear feedback from other runDisney enthusiasts…or those who watch from afar!