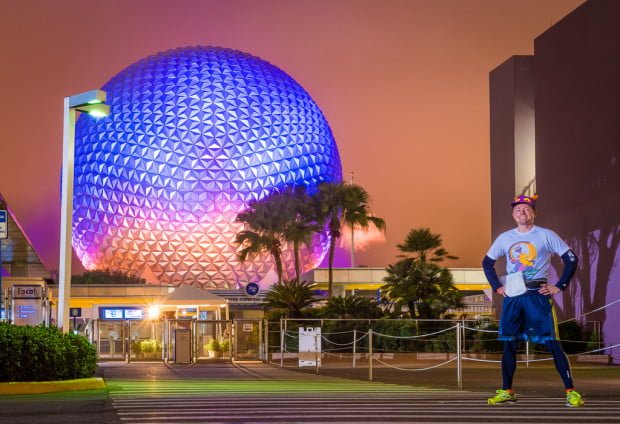 I’m a dope. I know that, you know that. This weekend, I’m taking that dopiness to the next level by participating in the Dopey Challenge during Walt Disney World Marathon Weekend. For those unfamiliar with it, the Dopey Challenge is participating in the 5K, 10K, Half Marathon, and Marathon. All told, it’s roughly 48 miles (I’m going to round it up to an even 50 to account for the epic strolls to the corrals, plus extra distance weaving among crowds). THAT’S RIGHT, 50 MILES.

If you read my Walt Disney World Marathon Preview that I posted a couple of weeks ago, you know training wasn’t going so well (big shocker). In that post, I vowed to start training harder in the home stretch…but that never happened (double shocker). In this case, it was because a couple of friends privately messaged me (likely to save me deserved embarassement) after reading my nonsense and informed me that it’s not recommended to start intense training at the last minute. So, at least this time I have a good excuse, I suppose.

If you have followed my “progress” as I learn how to run (and I don’t use the term “learn” sarcastically–there’s a surprising amount to know besides just putting one foot in front of the other at a rapid pace…that, or I’m just clueless), you know I did the full Marathon last year (if not, read about my misadventures in my Walt Disney World Marathon Trip Report) followed by the Disneyland Half Marathon last September. I’m also strongly considering the inaugural Disneyland Paris Half Marathon in the fall.

This morning was the Family Fun Run 5k. Spoiler alert: I didn’t win this one. Unless you’re talking about the “Getting Up Early” Sweepstakes. It was the first of 4 straight mornings getting up 4 a.m., which might be the biggest challenge of this whole circus. This is doubly true for me, as I’m stubborn, and have a really difficult time leaving the parks before closing. (If I leave a park before closing, did it really close? These are the great questions I ponder.)

In any case, this morning, my alarm went off at 4:20 a.m., and I immediately checked Uber to see what the vehicle situation looked like around me. I’m staying off-site at Floridays Resort Orlando, and don’t have a rental car. I was slightly worried that there would be intense demand this morning for race participants not wanting to deal with parking, but I was wrong. Uber pick-up was prompt, and I got to Epcot in about 10 minutes. Much better than paying exorbitant on-site hotel prices for what has become one of the highest occupancy weeks of the year! (Which would otherwise be one of the least busy…whomever dreamt up this “runDisney” scheme for Disney deserves a generous raise.) 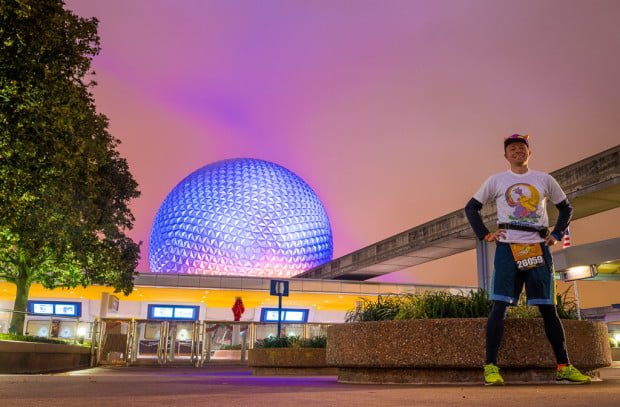 Since I arrived at Epcot way, way before the 5K was to start, I decided to screw around and take “selfies” in my fly Figment outfit with Spaceship Earth in the background.

The race was short, so I brought my Nikon D750 and 24-70mm f/2.8 lens with me, so I decided to rig the camera up on the ground and turn on the self-timer to take photos of myself. 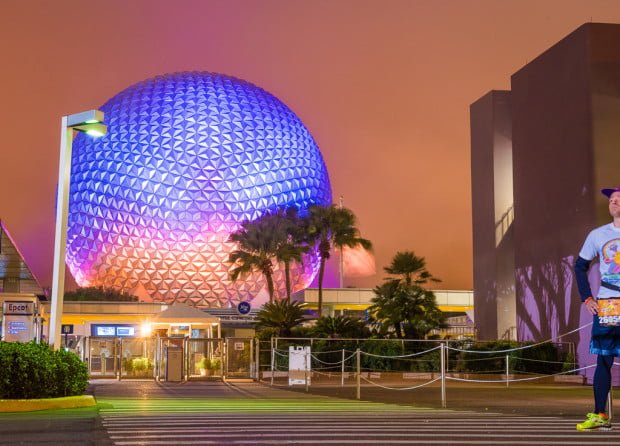 This went on for about 10 minutes in a couple of different spots as I had to deal with passers-by and also try to stand still for the 2 second exposures with my camera propped up on the ground. One of the uncropped outtakes is above, with the one “good” photo at the top of the post. I’m sure it looked like quite the comical process for those wandering past.

Fast forward over an hour, and my corral, Corral E, was off. The first 3 miles of the 5K were spent dodging people walking in front of me (you do the math). I really, really need to remember to submit proof of time next time, because even though I’m slow, I’m not that slow. 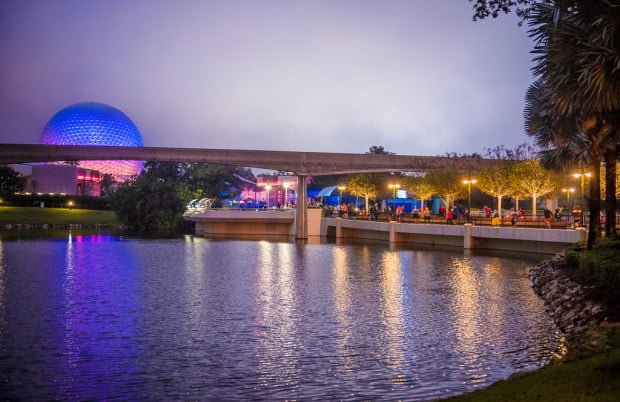 As for the race itself, there’s really not a ton to say. The weather was perfect, and it was a nice little stroll through Epcot. 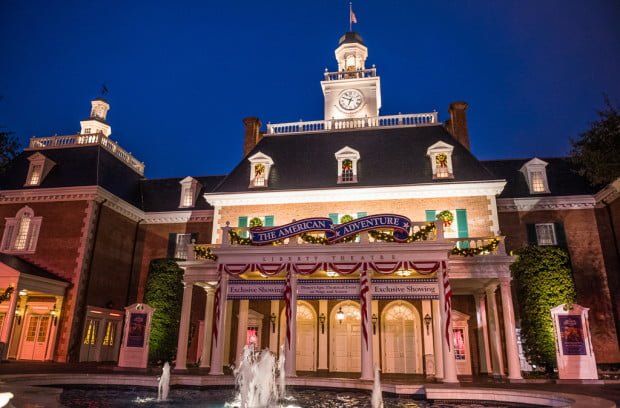 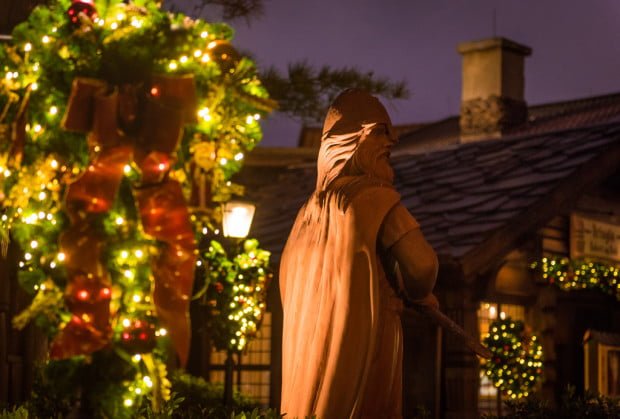 It was nice that the Christmas decorations were still up, and illuminated as we ran through the park. A bit ironic that they had “Let It Go” playing over the loudspeakers in World Showcase, though. 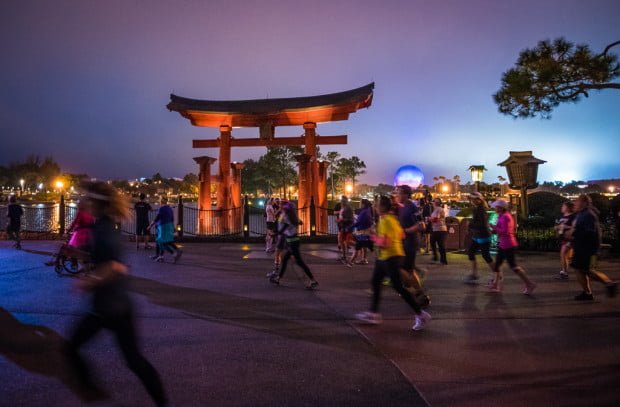 In terms of temperature, the weather was great, but it was still a bit humid, with a light mist (that you can almost see in these photos) in the air. 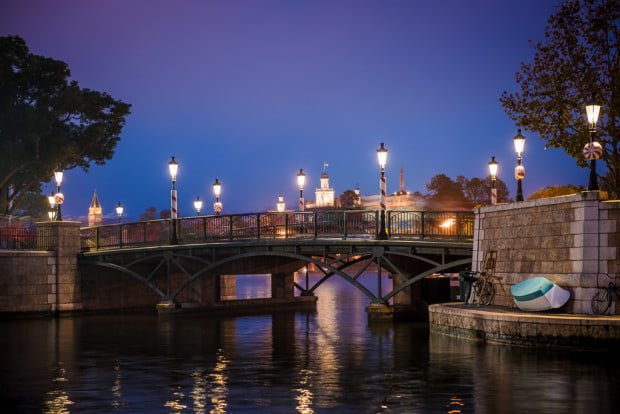 Since I had my DSLR with my, I felt compelled to stop for some photos. Above is a 1-second exposure with blurred runners passing over the bridge between France and the United Kingdom. 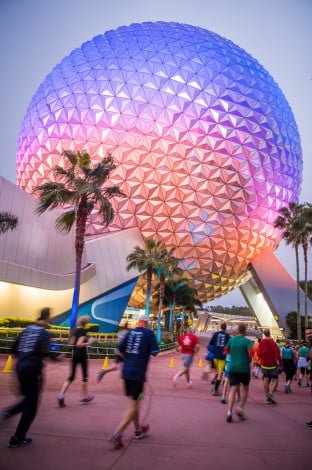 I finished! I don’t keep track of my time (and I don’t think Disney provides times for this individual event), but it was not exceptional. Aside from stopping for photos, I jogged the entire time, and I still am guessing that I averaged around a 12-13 minute mile.

Due to my starting corral, I had to weave among groups of walkers, which really slowed things down. Totally my fault for not submitting a time. Although…you’d think runDisney could somehow link my past runDisney times in their system. 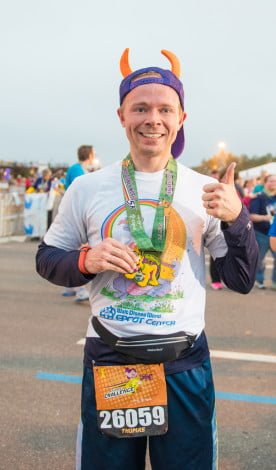 That’s really about all there is to say for today’s event. I know I haven’t covered the Expo, or other encompassing details about Marathon Weekend (such as the last ever Osborne Lights last night 🙁 ), but I figured I’d double back and do a recap like that after the weekend is over (I’ll also get back to the WDW Christmas Trip Report after the Marathon!). However, I wanted to get this posted quickly, today.

For those of you at Walt Disney World this weekend, for the race or otherwise, hope to see you around. If you see us in the parks or on the course, say hello! 🙂

Did you run the Family Fun Run 5K this year? Are you running any of the events of the Walt Disney World Marathon Weekend? Any questions? I’d love to hear feedback from other runDisney enthusiasts…or those who watch from afar!