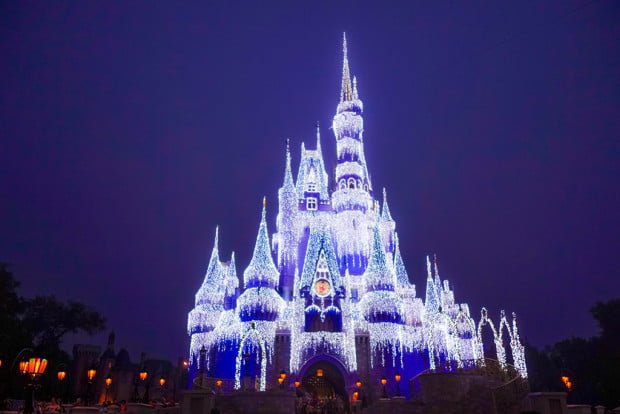 The middle section of the Walt Disney World Half Marathon was through the Magic Kingdom, and this was a pretty awesome stretch. You probably couldn’t tell from the earlier photos due to darkness, but it was a really foggy morning.

When entering Main Street from backstage, the popcorn lights intensified this fog, giving everything a soft, ethereal glow. That, plus the blue hour light made for a stunning scene. It also helped that there were tons of spectators lining Main Street, cheering everyone on.

If turning that corner on Main Street to see Cinderella Castle for the first time doesn’t instantly put a smile on your face, check your pulse. You might not really be living.

Running through the Magic Kingdom is something of which I will never tire, and it’s a special experience. You can never see Cinderella Castle for the first time again, but this is about as close as you can get, in my opinion, to recreating the high of that experience. It’s magical. 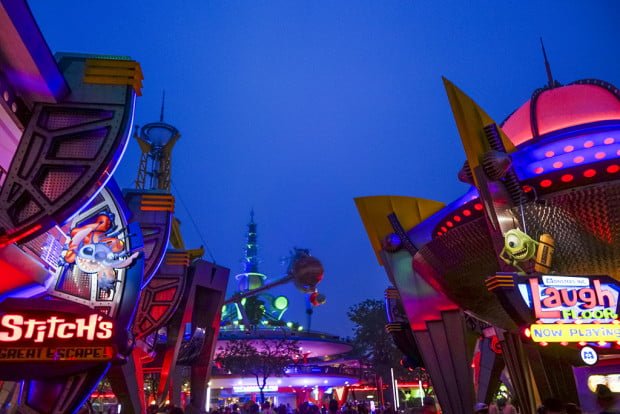 After going down Main Street towards Cinderella Castle, the course headed into Tomorrowland, which was another great area to see during the foggy blue hour. Astro Orbiter was running, and all of the lights were on. Pretty cool. 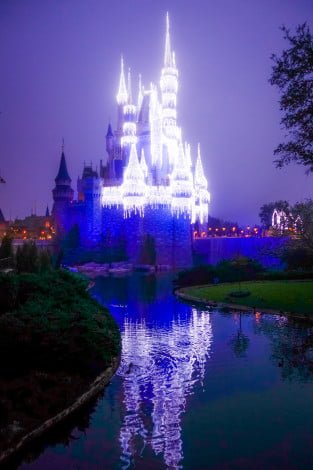 My tip: stop at the end of the Liberty Square bridge for a better view (see above). I’ve taken shots from there in each of the three races I’ve done that have gone through Magic Kingdom, and there is never anyone there, save for a Cast Member (who can take your photo). 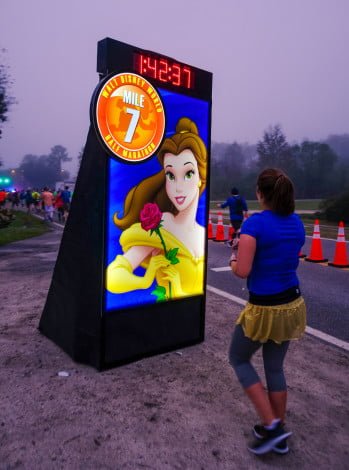 Seven miles in a bit over an hour. Not too bad! 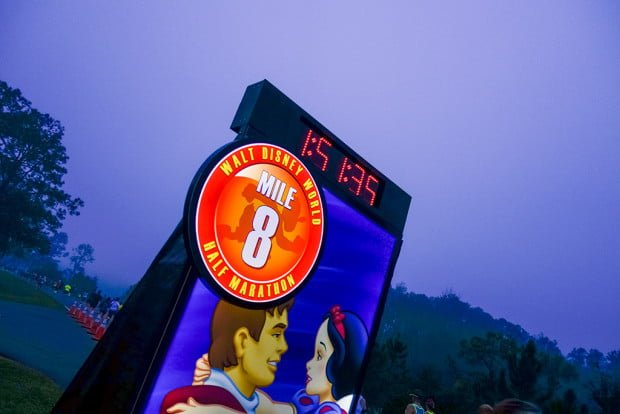 This stretch heading out of the Magic Kingdom back towards Epcot wasn’t too exciting. There are some characters outside of the Grand Floridian and the Mickey Mouse golf cart outside the golf courses, but my pictures of each of these things are atrocious, so here’s a photo of a mile marker instead! 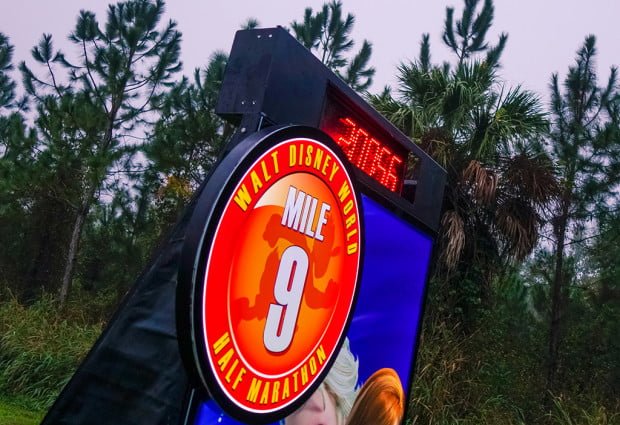 …and another mile marker. Wow! EXCITING! 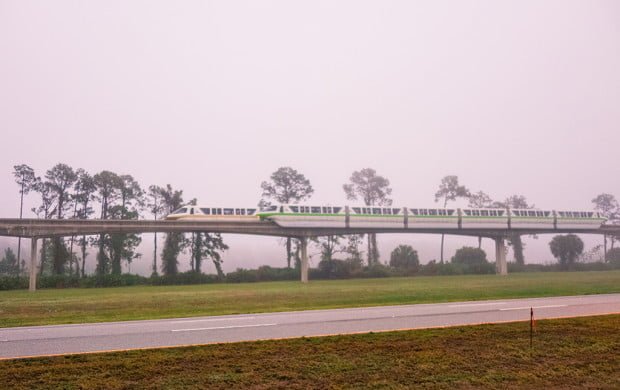 The monorails were also doing their own race this morning! (Not really–they were actually heading in opposite directions.) 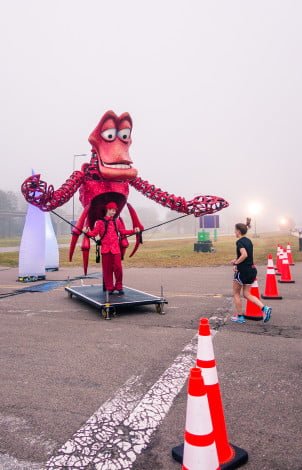 To my knowledge, these guys originally came from Disney California Adventure and were used during the debut summer of World of Color. They’ve popped up various places since then. They sort of remind me of Tapestry of Nations. (Now it’d be really cool to see some of those on the course!) 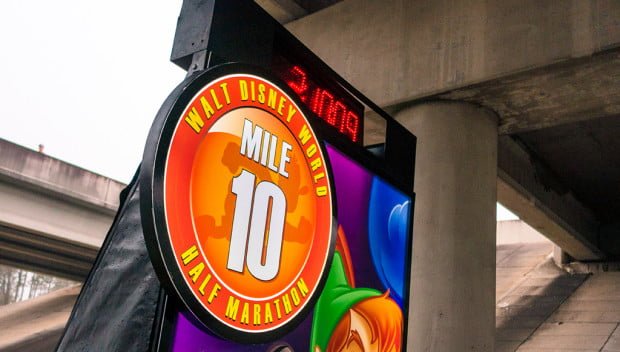 This is around the point where all the two prior days of running and walking around the parks started to catch up to me. 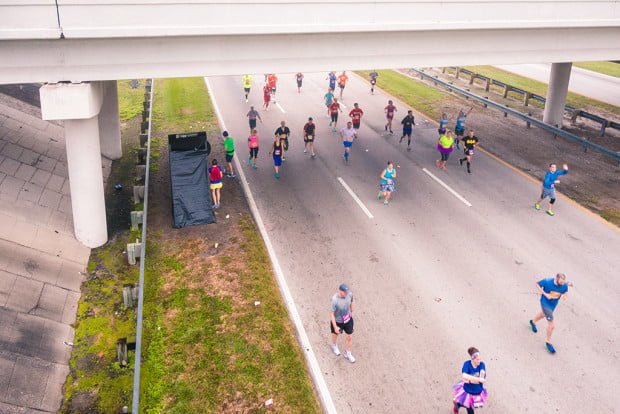 The view of that same mile-marker from above… 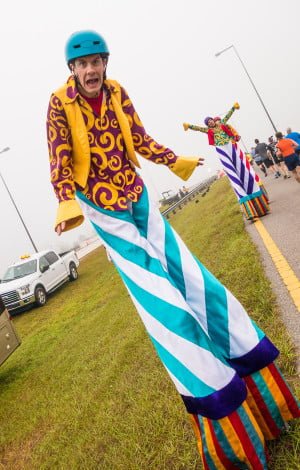 Nice of Billy Eichner to make an appearance and show his support to the runners! 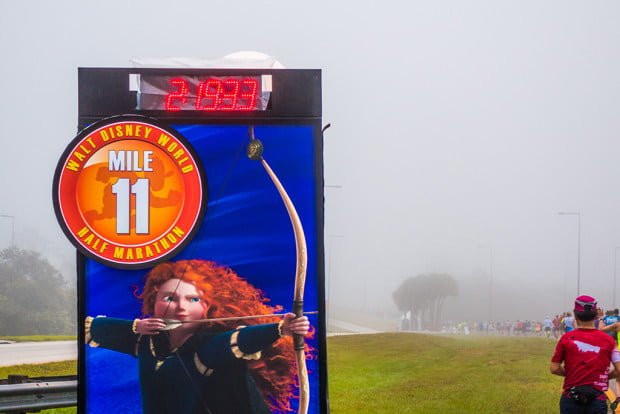 With not too much to stop and photograph, I did alright time-wise on this mile. 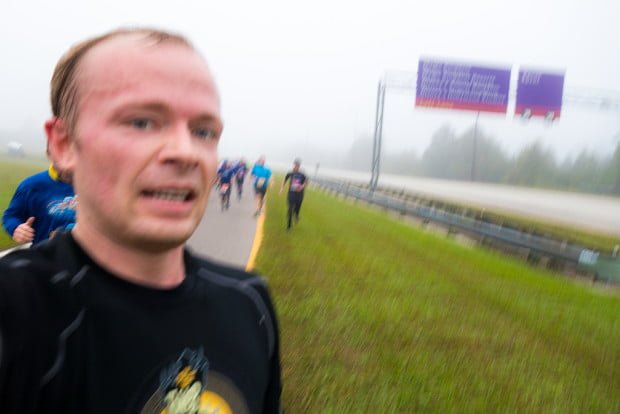 Then I noticed famous runner and the face of runDisney, Jeff Galloway, behind me. Not wanting to bug him, I tried to grab a clandestine selfie while running. I’m sure he knew exactly what I was doing, since I took like 30 shots because I kept screwing them up. This little gem was still the best I could do. 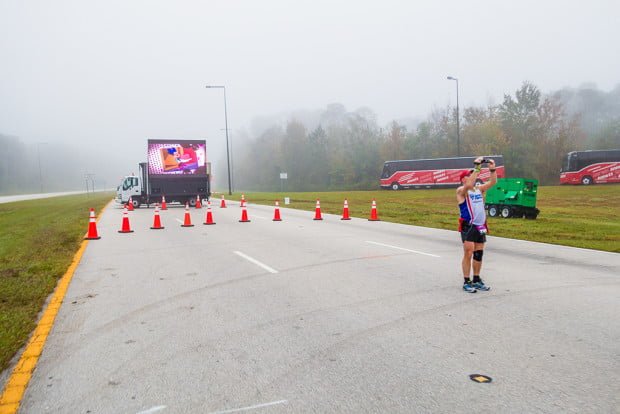 When I was reviewing my photos before writing this, I looked at this for a while wondering why the heck I took a photo of some random dude and/or cones, buses. It finally dawned on me: this was the turn-around point for a portion of the course that doubled back. This photo was to document that I ran the full course. 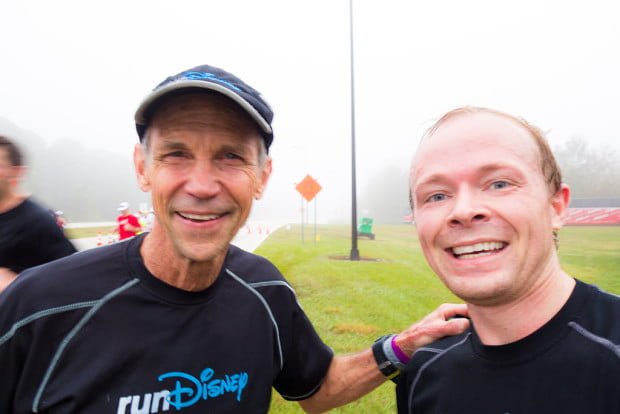 While I was stopping for that, Jeff Galloway passed me. As he ran ahead of me, I noticed him stop for photos with a few other runners. At that point, I decided it probably wouldn’t be rude to ask for a quick photo, so I caught him from behind and quickly asked Mr. Galloway if he would mind taking a quick photo. I only paused for about a half second (hence it being slightly blurred…d’oh), and he was very gracious about it. Hopefully this wasn’t a faux pas. (If you are interested in an accessible approach to training, check out his plans on JeffGalloway.com.) 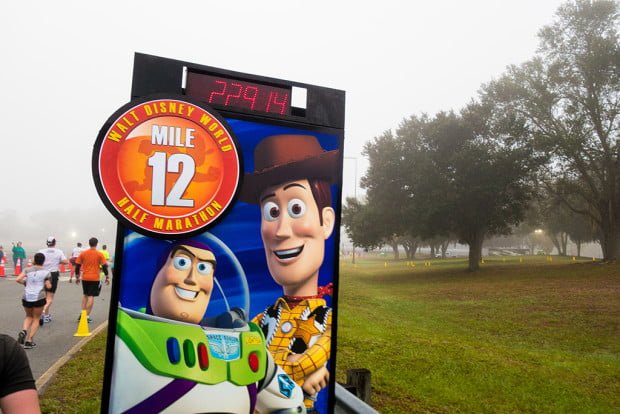 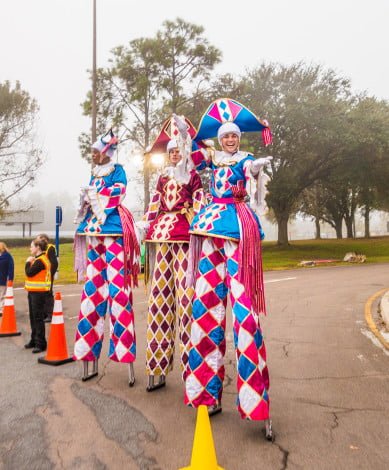 I suspect they put these clowns in the final leg of the race to “motivate” people to finish strong. 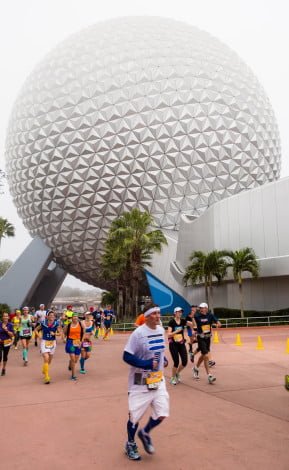 The final leg of the Half Marathon, like the two events before it, went past Spaceship Earth. 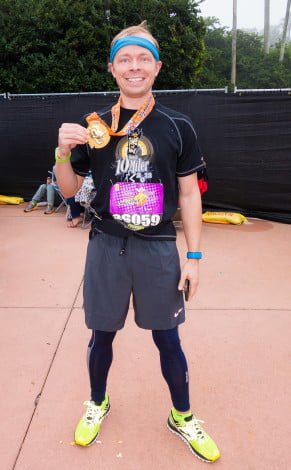 I ended up finishing in 2:02:48. While I was irritated that I didn’t finish in under 2 hours, I was pleased that I beat my Disneyland Half Marathon time (2:08:36). Not only is it easier to run in California, but I was marginally better-trained for that race, and I hadn’t run on two consecutive mornings before the Disneyland Half. Plus, it leaves <2 hours on the table as an easily attainable goal for my next half marathon.

By the end, I was starting to feel a bit sore in my knees and nipples (yep), and could feel the makings of blisters on my feet. Save for the nipple pain, this worried me, as I still had 26.2 miles to go the next day. Last year, I hurting during the last 6 miles (or so) of the Marathon, and could barely walk the next day, and that was when running on fresh legs.

This had me really concerned about my prospects for finishing the Marathon the next day, or injuring myself in the process if I did…

If you enjoyed this post, we would really appreciate it if you would share it via social media, or leave a comment below. We put a lot of work into this blog, and hope it’s entertaining and/or useful to you! 🙂

Did you run the Walt Disney World Half Marathon this year? What did you think of the race? Any feedback on my random thoughts here? Any questions? I’d love to hear feedback from other runDisney enthusiasts…or those who watch from afar!