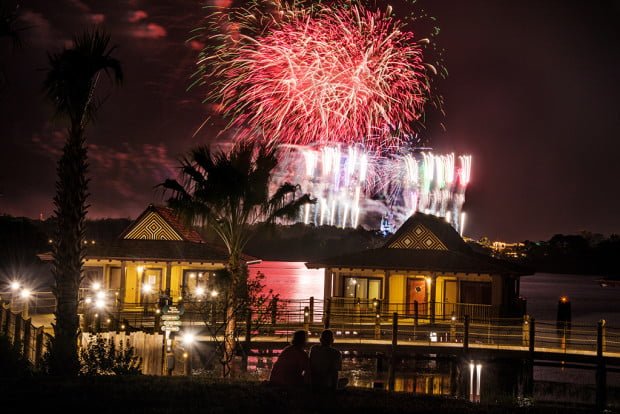 Think of this as a follow-up to our Beach Club v. BoardWalk Inn and Polynesian v. Grand Floridian match-ups. Beach Club won the former (and secured a decisive 65% of the reader vote) while Polynesian won the latter (and scored a whopping 74% of the reader vote). If this were March Madness, those previous posts would’ve been the Elite Eight with the current match-up being a Final Four game. (The other side of the bracket would have our Wilderness Lodge v. Animal Kingdom Lodge face-off in the Final Four after both routed the competition so badly in the Elite Eight that those match-ups don’t even merit blog posts. 😉 )

This one is going to be tough and, like many of the comparisons, will ultimately hinge in large part on personal preference. Still, we’re hoping to help the undecided to decide, with a comparison that strives for some degree of objectivity. Both rank highly in our Walt Disney World Deluxe Resorts Rankings, and both are some of the ultimate in theme and luxury at Walt Disney World. Really, you cannot go wrong either way here.

As with all posts in this ‘versus’ series of Walt Disney World hotel comparisons, we use 6 elements of two different resorts to determine which is “the best.” It’s time to compare and contrast… 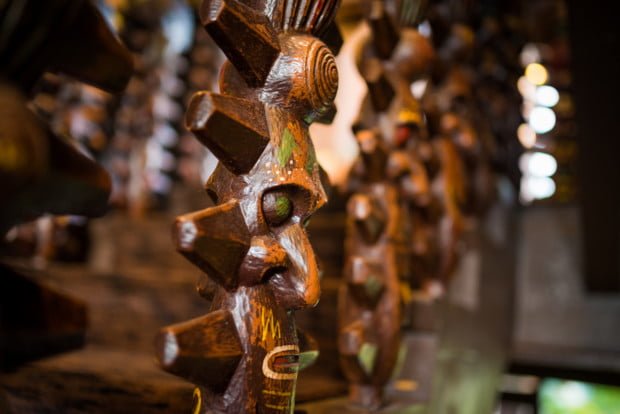 Theme: Polynesian – Beach Club lost its thematic showdown with BoardWalk Inn primarily because the latter conveyed a more distinct theme in the similar concept both encapsulated. While we also give the Poly an edge over Beach Club, it’s not a decisive victory. Beach Club’s presentation of an idealized version of Newport (New England, not California) is pretty effective when not judged against other Crescent Lake resorts.

However, Disney’s Polynesian Village Resort does a better job of capturing the imagination, making you feel like you’re at a tropical resort. From the lush grounds to the South Seas vibe throughout the resort, it’s the perfect confluence of 20th century tiki culture and authentic island paradise. The result is something that doesn’t exist in the real world, but (like so many of Disney’s finest creations) gets you to suspend disbelief. Actually, that could probably be said about both of these results.

Consequently, and as we’ve said before, this is going to come down to how guests digest each theme–how a particular theme makes them feel. We were really surprised by the number of people who indicated that they didn’t like the Polynesian’s theme. (Point of clarification: the Poly is a twist on tiki culture popularized in the 1950s; it is not meant to be an authentic representation of past or present Polynesia. If you’re looking for authentic culture, try Aulani.) When it comes down to the feeling we get from a theme, Disney’s Beach Club Resort rates highly–for us, at least. 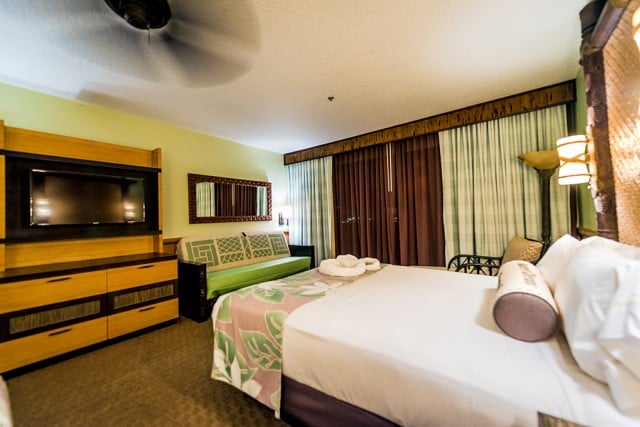 Rooms: Polynesian – In its previous ‘battle’, Beach Club lost to BoardWalk Inn, on the basis that it is difficult to distinguish Beach Club’s rooms from a trendy, modern day hotel at the beach. These rooms do not balance theme and luxury well, and feel like they could be found at any ole upscale hotel. Don’t get us wrong: they’re nice, but they’re nothing special. And for the prices Walt Disney World charges, we’re looking for something special.

The rooms at Disney’s Polynesian Village Resort offer that something special. These rooms are spacious and luxurious, while also conveying a sense of tiki-culture kitsch. These rooms simultaneously feel luxurious and “light” which is a real accomplishment. (Even if you didn’t care at all about theme, the Poly’s rooms are nicer.) 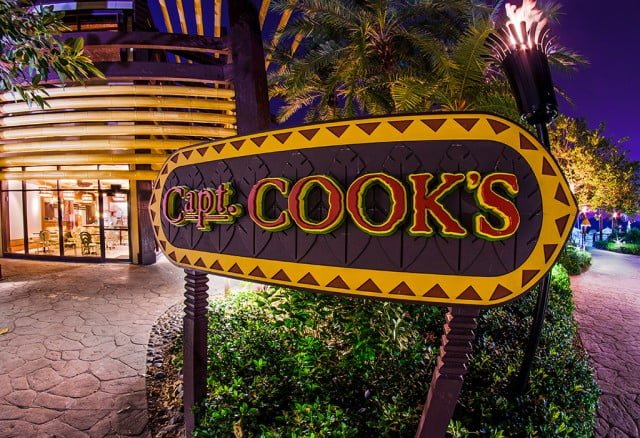 Dining: Polynesian – This is a tricky one. When approaching this, I wondered whether I should be consistent with previous ‘versus’ showdowns and only consider dining at a particular resort, or expand that to the entire region. I’ve decided to adopt the latter approach, as I feel the previous resort comparisons were narrower, whereas this is a hybrid individual resort comparison and ‘resort district’ comparison. However, for the sake of being equitable, I’ll limit each resort to what’s within walking distance.

If you look at the table service lineup in the vicinity of each (again, by foot), you have some of the heaviest hitters in all of Walt Disney World. It’s hard to declare a victor in that regard, as each is stacked, offering something for every budget and taste preference, with some really high quality options. The decision becomes much easier–a no brainer, really–once we turn to counter service options. The counter service selection at the Crescent Lake resorts is pitiful. BoardWalk Bakery is the highlight, and that’s best considered a bakery, not a restaurant or food court. The Poly, on the other hand, has Captain Cook’s and the newly revamped Gasparilla Island Grill (plus poolside options), both of which are exceptional. 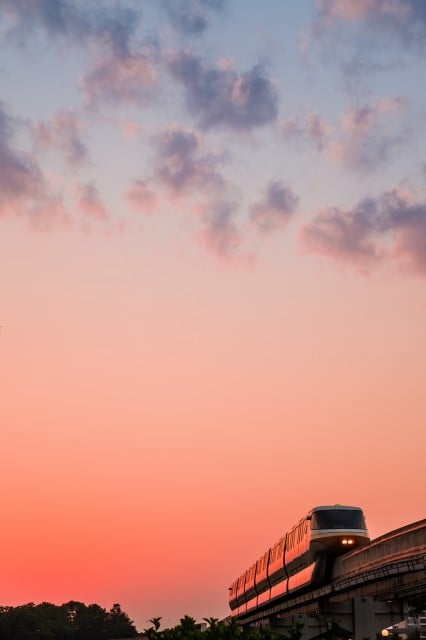 Transportation/Location: Polynesian – It would be really easy to call this one a push, given that both have really prime locations and you can get to two parks from each without taking a bus. I know some people who prefer Magic Kingdom area resorts, and people who prefer Epcot area resorts. Our preference varies from trip to trip, in fact. 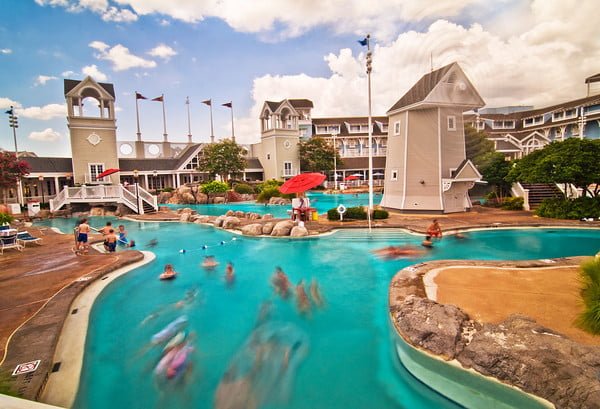 Pools: Beach Club – Nothing has changed since the last time we wrote about Storm-Along Bay. It’s still the #1 resort pool at Walt Disney World, and still the gold standard. This isn’t “just a pool,” it’s more like a “water park lite” (very light–it’s definitely no Blizzard Beach or Typhoon Lagoon) that is 3 acres in size with sand at the bottom, slides, overlooks, and a lazy river. The layout of the pool is also very cool, with ample lounging space and an engaging environment that makes it fun to explore. This will stick with many kids as the highlight of their trip to Walt Disney World (seriously, we hear from so many people who say their kids care more about the pools than anything else). Moreover, Storm-Along Bay rivals Animal Kingdom Lodge’s savanna is the single most compelling amenity in all of Walt Disney World.

The newly reimagined Lava Pool is imaginative and immersive, with coves to explore (and hide from the sun) and a fun place for kids to explore, but it still doesn’t hold a candle to Storm-Along Bay. Nor do the quiet or secondary pools. The retro style of Polynesian’s Oasis Pool (complete with shade structures that act as quasi-cabanas) is nice, but it also isn’t enough to overcome the powerhouse that is Storm-Along Bay. 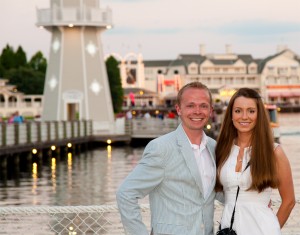 Cost: Beach Club – These both have rack rates that are $500+ per night most of the year. The difference, though, is that most of the time, Beach Club stays in that $500 range (sometimes in the $400 range) for a standard room. By contrast, the Poly hits $600 and even eclipses $700/night during some seasons.

While they are both among the most expensive resorts in all of Walt Disney World, the $100/night (or so) gap between the two is pretty significant. Moreover, the gap only grows if you want a nicer view. If you want something with a view of Cinderella Castle at the Poly, expect to pay nearly double the standard room rate at Beach Club (or $200-$300 more than their highest view tier–Beach Club doesn’t have a theme park view category, so it’s not a totally fair comparison). 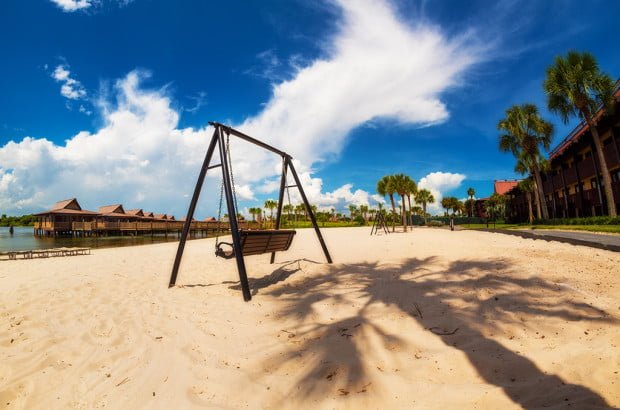 Verdict: Polynesian – For us, this verdict ultimately comes down to the Poly’s well-rounded, high-level of quality across the board. We can’t think of a single, glaring weakness it has; by contrast, Beach Club has a couple. These weaknesses may or may not matter to you, just as the strengths of each may or may not matter, but they’re the basis for the Poly’s victory.

Long-time Walt Disney World fans probably already have a favorite, with many already being on Team Crescent Lake Resort or Team Monorail Resort. For us on a personal level, it’s a close call that probably depends upon the weather and nature of the trip. For objective advice to first-timers, it’s a little clearer. Even if you grade on a slight curve due to the price difference, the Poly still has a location that’s going to be more convenient for most Walt Disney World guests, dining options that make more sense, and nicer rooms.

We mention first-timers, specifically, because it’s likely many other Walt Disney World fans have already formed their “alliances.” Even first-timers should use some degree of discretion, considering how much factors like being on the monorail and having good counter service dining at the Poly, or the–potentially ultimate–factor of access to Storm-Along Bay pool at Beach Club.

Now, I’m curious as to what everyone else thinks. As has become a fun “tradition” with these versus posts, here’s a poll so you can vote for your favorite of the two:

Considering location, pools, theme, rooms, dining, price & other factors, which of these two Walt Disney World hotels do you prefer:

Remember, with great power comes great responsibility, so give this vote the proper consideration it deserves… 😉 Last week’s poll for Saratoga Springs v. Old Key West went pretty much how we expected, 59% in favor of Old Key West (by the way, we stopped by there at dusk last night, and it only reinforced my opinion there–I could sit for hours by the dock just listening to that background music!) I almost don’t want to make prediction on this poll for fear of being way off. Even though these are two resorts that are really popular with Disney fans, I think the Poly will be the favorite, by around 55/45.

Now that we’ve shared our take, we want to know your preference. Is Storm-Along Bay the deciding factor for you? Is being on the monorail loop a better location for you, or would you rather be at Crescent Lake? Are we missing a key variable that could, potentially give one the edge? Please give your feedback via the poll and comments below. While we hope this post is helpful in offering a head-to-head comparison of the most crucial elements of each Walt Disney World resort experience, we know it’s not definitive or the final word for every guest. In addition to reading the comments before making your own decision, we suggest supplementing this with our full review of Disney’s Polynesian Village Resort and our Disney’s Beach Club Resort Review (the latter is a bit outdated). With that said, what do you think…did we make the right choice here?