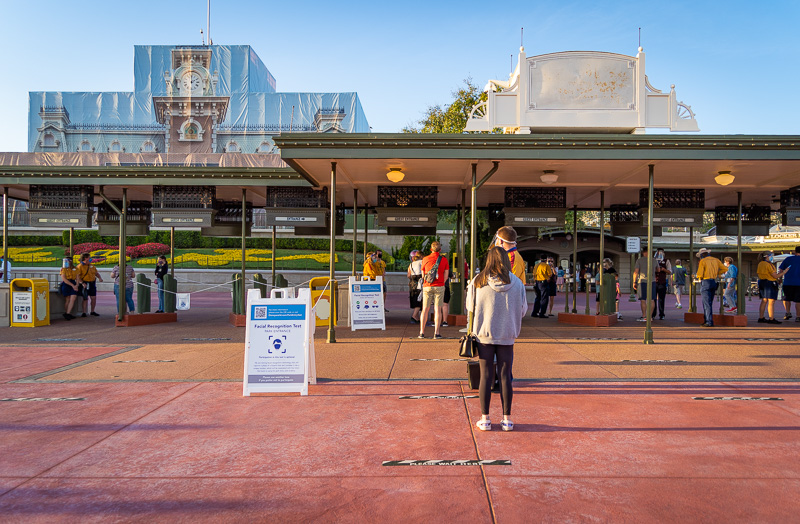 Let’s start with official details, per DisneyWorld.com and signage outside the gates at Magic Kingdom. According to that, this is a facial recognition technology pilot program tested at Magic Kingdom. It’s one of many “innovative and convenient ways” to improve the guest experience, especially with a shift in focus to more touch-less experiences in the future.

Walt Disney World’s limited test of facial recognition software to enter Magic Kingdom captures an image of a guest’s face, converts it into a unique number, and then associates that number with the form of admission (MagicBand, physical ticket, MagicMobile) used for park entry.

May 3, 2021 Update: Roughly a week after extending the test indefinitely, Walt Disney World has quietly ended the facial recognition test for park entry. All equipment has been removed from the turnstiles at Magic Kingdom, signage is gone, and even the official website offering details about the test has been removed.

Cast Members at Magic Kingdom are advising that the test is completed, and the program is being evaluated for future use (or not) around Walt Disney World. In the past, we’ve seen other tests conclude and then be rolled out widely, whereas others have fizzled out, never to reappear again in any form. Only time will tell which is the case with the facial recognition test.

In any case, here’s how the system worked, and potentially will work again in the future… 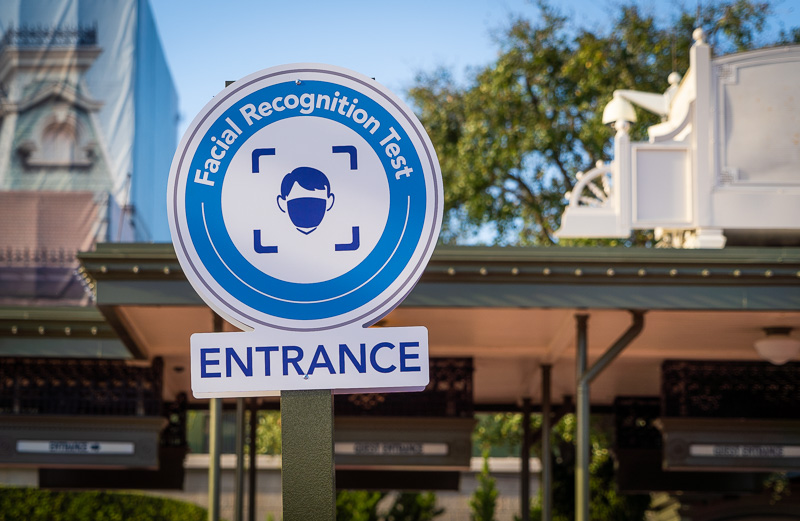 When you’re ready to enter the park, simply enter the lane designated for the test program.

Step 2: Remove Accessories, But Keep Your Face Covering in Place

Please take off any hats, visors or sunglasses before you approach the facial recognition test zone. Your face covering must remain on at all times.

Once in the facial recognition test zone, stand facing the camera and then position your valid park admission or MagicBand close to the scanner to activate the technology. The technology will capture an image, which will be converted into a unique number that will be associated with your valid ticket media. 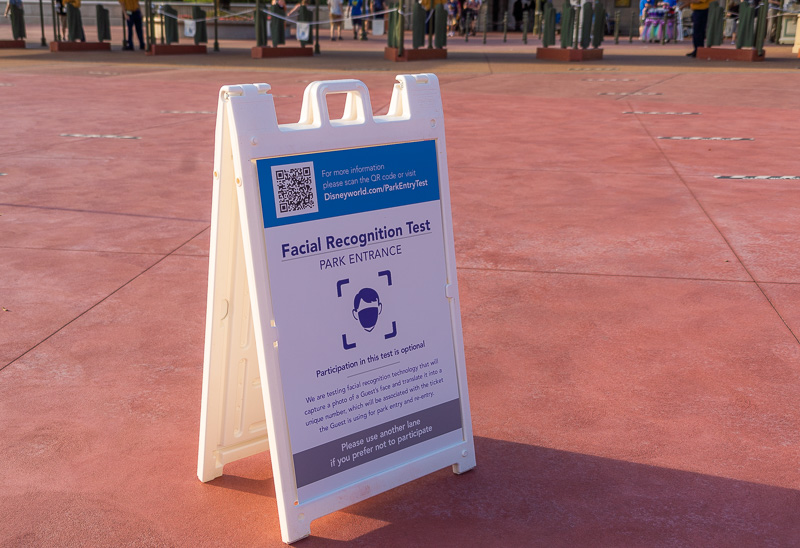 Walt Disney World also notes that the security, integrity, and confidentiality of your information are extremely important to the company. Disney indicates that it has implemented technical, administrative, and physical security measures that are designed to protect guest information from unauthorized access, disclosure, use and modification. Please be aware that, despite best efforts, no security measures are perfect or impenetrable.

Above is a video we took entering Magic Kingdom via facial recognition. It’s pretty straightforward.

Apologies for the jerkiness, obviously it’s a bit difficult to go through the process of entering the park while recording at the same time. Omitted from the video is the on-screen prompt, which replaces the “touch ticket or MagicBand” once you’ve done that. 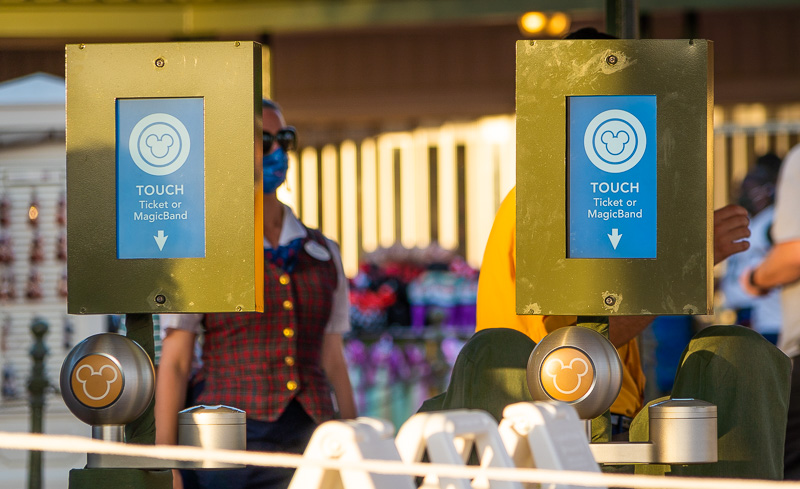 Unsurprisingly, this has already proven controversial among Walt Disney World fans. The objections are more or less what you’d expect, along the lines of past Big Brother concerns about Walt Disney World. That’s always somewhat amusing coming from people using the internet, where a few companies have voluminous data about behavior that most people would find inconceivable. It’s particularly ironic when people voice said fears on Facebook, of all places.

I’ve been around the fan community long enough to remember when the controversy of the day about MagicBands was how Walt Disney World would use them to track guests and use that for nefarious purposes. Now, fans are upset at the mere possibility that MagicBands might be phased out. (As discussed here, that’s unlikely to happen anytime soon.) 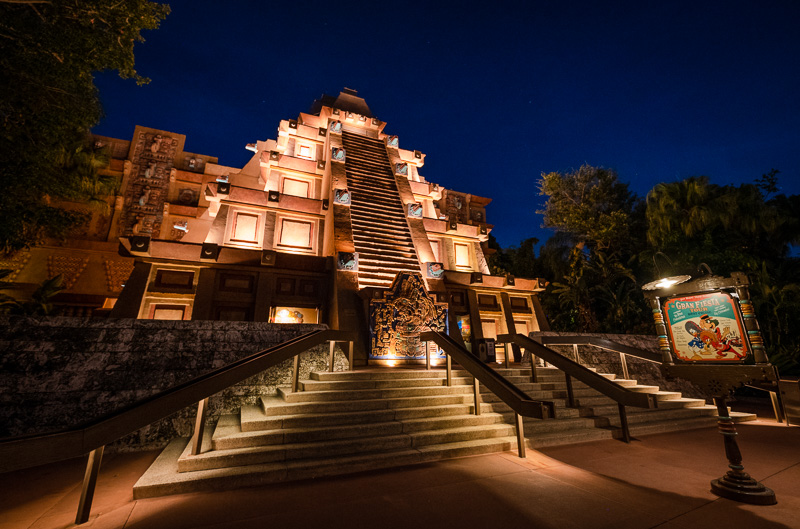 More recently, there have been concerns about the travel industry and health privacy. In our view, the distinction between this and something like a vaccine passport (which now seems unlikely at Walt Disney World, for what it’s worth) is that this is technology Disney might already been using anyway without your knowledge. Now it’s just being deployed in a way that’s advantageous to guests.

Facial recognition technology is fairly ubiquitous, and its utilization in public settings and at private businesses might surprise people. We don’t know the degree to which Walt Disney World is already using facial recognition, but sophisticated surveillance systems have been in place for years. Casual guests may not notice them, but there are cameras all over in the parks. It’s one of those things that once you start noticing them, you spot them everywhere. 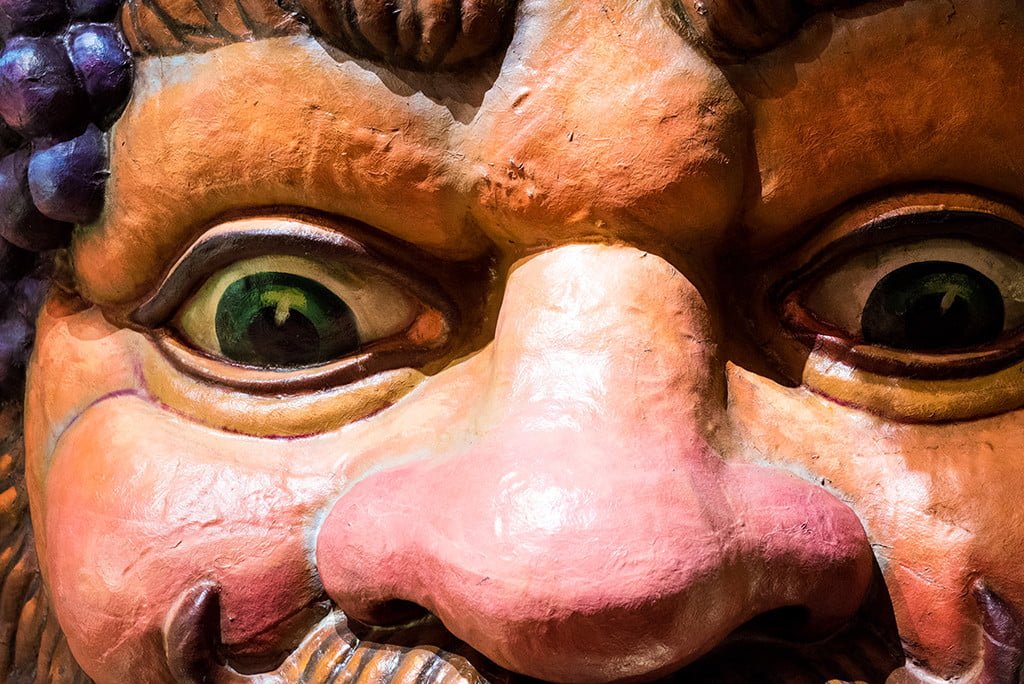 Privacy concerns and apprehensions about the misuse of facial recognition technology are absolutely valid. However, it’s possible to hold those beliefs while also being cognizant of the reality that, to a large degree and on a societal level, that ship sailed long ago. (Arguably, back in September 2001—keep in mind that the true life documentary, Minority Report, came out the very next year.)

At this point, it’s mostly a question of companies will quietly use this tech solely for their advantage or offer some of the upside to customers, as well. People voicing frustration on social media is not going to have the desired effect. Those complaints will make companies like Disney more discreet about what they’re doing, but it will not stop them from using this kind of tech. It’s possible to dislike facial recognition while accepting that it’s an inescapable part of our lives; we might as well take advantage of its upsides if we’re stuck with its pitfalls.

Now, this also isn’t to say facial recognition technology is infallible or Walt Disney World will deploy it flawlessly. We’ve been around the block enough with Walt Disney World and technology infrastructure to know better. Cheap shots at Disney IT aside, it’s fair to point out they have also done a lot post-reopening that has dramatically improved the guest experience.

In fact, three of those things made our “Best of” List for Last Year at Walt Disney World. In particular, contactless security screening is a huge improvement that has made park entry smoother, dramatically improving first impressions of the arrival experience. We are huge, unequivocal fans of that. 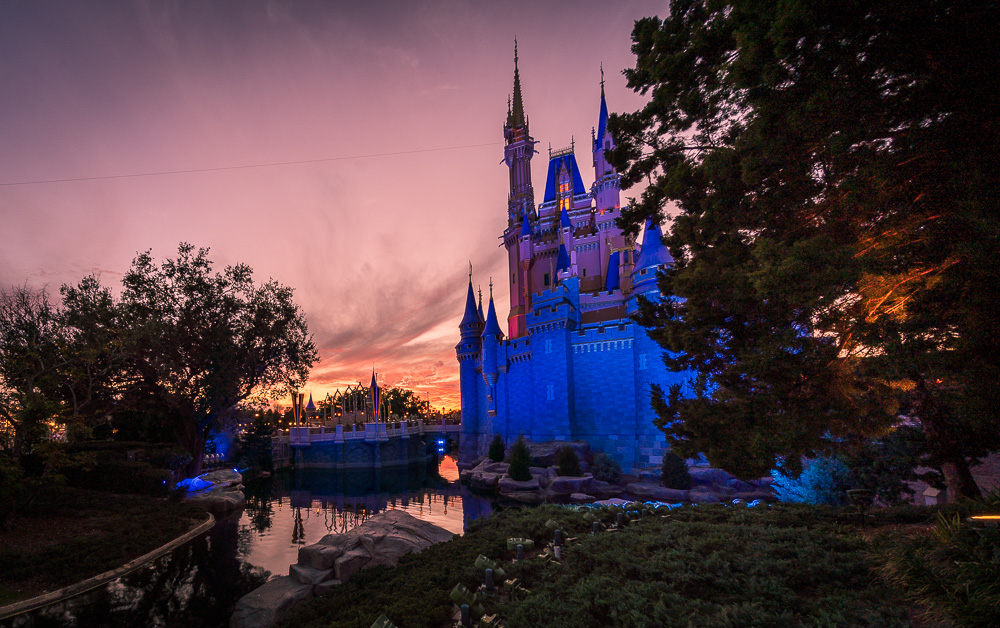 With that said, our experience participating in the facial recognition park entry pilot program at Magic Kingdom went pretty well. Of course, this was literally the first day and we entered in mid-afternoon when demand was low and there was literally no one else in line. The system hasn’t exactly been put through its paces, and a truer test–both of the upside and downside–will come on crowded days with attendance back to normal levels. In particular, it’ll be interesting to see whether this has any issues the next time there’s a system-wide outage with Walt Disney World’s technology infrastructure.

Ultimately, although we find the societal implications of facial recognition technology and its use on a national level a bit unsettling, that’s a public policy issue beyond the scope of this post. Setting that contentious topic aside, we’re on board with just about any guest-facing Walt Disney World technology initiatives that reduce friction. As such, we are cautiously optimistic that this will be another such enhancement. This could be the second half of improvements to the arrival experience, proving immensely valuable when crowds pick back up.

What do you think of Walt Disney World using facial recognition technology for park entry? Do you expect this to spread beyond Magic Kingdom and become a permanent feature, or think it’ll fizzle out? Will you utilize this if it’s more efficient or avoid it due to privacy concerns? How do you feel about Walt Disney World’s post-reopening track record with contactless technology solutions? Do you agree or disagree with our commentary? Any questions we can help you answer? Hearing your feedback–even when you disagree with us–is both interesting to us and helpful to other readers, so please share your thoughts below in the comments!