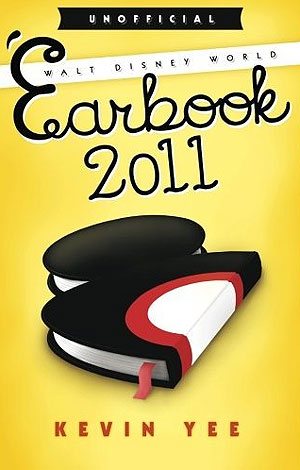 by Kevin Yee documents all of the changes and happenings at Walt Disney World in 2011. From the addition of new attractions, like Star Tours: the Adventures Continue, to photos from small test experiences, like the Wilderness Explorers Game, ‘Earbook 2011 is a comprehensive catalog of changes. I was actually a bit shocked that so many things had changed when I first read through the title. Most internet pundits would have you believe that Walt Disney World has not changed since 1996.

For those unfamiliar with Kevin Yee, he is one of the most prolific authors

of non-guidebook Disney theme park titles, with at least 9 books to his name. He’s also a regular contributor to MiceAge, and his ‘watch-dog’ style reporting has illuminated many problems at Walt Disney World in recent years (check out his recent “Rizzo Factor” post). Although an independent author, he is well-versed in the Walt Disney Company, as he worked at Disneyland for 15 years and has extensive theme park knowledge. Yee has co-authored several additional titles, including the ultimate time-travelers guide to Disneyland, Jason’s Disneyland Almanac

. While this almanac is detailed even by Disneyland-fan standards, it is but one of many examples of Disneyland’s well-documented past. A number of Disneyland-centric blogs and books exist that share photos and stories about the evolution of Disneyland. Given that Disneyland opened in 1955, this is quite impressive. By comparison, Walt Disney World has very little of this. Some blogs exist, but the most probing book is likely Jeff Kurtti’s Since the World Began, which (understandably, given its target tourist audience) does not compare to many of the more notable Disneyland titles.

This is why Kevin Yee’s ‘Earbook titles are so significant. Years from now, when websites from 2011 are but fragmented remains on web 7.1 (or whatever incarnation we’re on by then), Yee’s ‘Earbooks will provide an invaluable resource to Walt Disney World historians searching for the dates of particular seasonal events or information concerning a store opening, attraction closing, or even a special one day event. At 164 pages, ‘Earbook 2011 provides a concise summary of these changes along with full color photos to accompany each item or event he documents. The book suits its particular purpose quite well, and is a title that will prove a fun look back at the parks for anyone who visited in 2011.

That said, and while I would describe what Yee has crafted here as a “public service” for Walt Disney World fans, it’s not perfect. Some descriptions of offerings and events are not quite as detailed as I would like, but that just could be because I’m approaching this title as a future reference title for historians. That’s not entirely fair, and most readers are unlikely to be historians.

Overall, ‘Earbook 2011 is a great title offering a snapshot in time of Walt Disney World in 2011. If you visited the parks in 2011, consider picking it up as a way to reference “how things were” back in the year you visited. If you have an eye towards history, pick it up. If you don’t fall into either of these categories, head over to Amazon.com and click the “Look Inside” button to get an idea for the content of the book.

One Response to “Earbook 2011 Review”