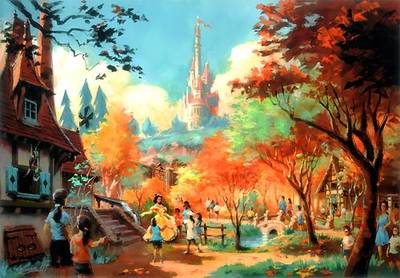 Enchanted Tales with Belle in New Fantasyland is now offering limited previews to select guests as of August 30, 2012. No word as to just how limited these previews are in nature, but they definitely do not rise to “soft opening” status. We’ve heard from multiple individuals who were in the Magic Kingdom yesterday, most of whom did not even know the previews were occurring. Some guests who inquired with Walt Disney World Cast Members near the New Fantasyland walls were told that the limited testing was only for Cast Members and their families, while other guests were approached by Cast Members at random to participate in the testing.

At this point it appears that the attraction is in very limited test and adjust phase, and has not yet entered any sort of public soft openings. Please be aware, if you head to the Magic Kingdom expecting to walk up to walls and be allowed to enter the attraction, that will not happen. The testing is currently on a more “invitation” basis. So maybe if you just wander around outside the walls all day, you’ll eventually be chosen! 😉 (Kidding, of course, that’s probably not a good use of your time.)

In case you didn’t see the video yesterday of Enchanted Tales with Belle, here it is:

Although Enchanted Tales with Belle has appeared further along that other parts of New Fantasyland (besides the Little Mermaid dark ride, which looks nearly finished) for a while, we’re a bit shocked that semi-public testing is already beginning. We previously heard that training for this attraction wasn’t even set to begin until September 1st, putting any type of soft opening in late September at the earliest. So training must have started prior to September 1st. We would do not expect these tests to be regular, nor do we expect any widespread testing to occur before November 19th. Our suspicion is that testing with “regular” guests present is more important here than anywhere else in New Fantasyland due to the interactive nature of the attraction, and this testing will be conducted until Walt Disney Imagineering is satisfied that it can resume “behind closed doors” testing and adjusting on its own.

As for Enchanted Tales with Belle itself, the jury is still out on it. Based upon the videos we’ve seen, it doesn’t look all that appealing to us, but the technology is incredible, and we realize not every single attraction Disney produces is going to be aimed at a twenty-something childless couple. (Funny how that works!) For families looking to enjoy the ever-popular meet and greets without waiting in long, hot outdoor lines, this should be an incredible experience. And, if Disney manages to interject some humor a la Turtle Talk with Crush, it may turn out to be an attraction that we enjoy, too!
For more commentary on New Fantasyland, check back later today…
Does the prospect of limited testing already make you even more excited for New Fantasyland? What are your thoughts on Enchanted Tales with Belle? Share your thoughts in the comments!

One Response to “Enchanted Tales with Belle Limited Previews!”