We have new a detailed new look at Fantasy Springs, the $2.3 billion expansion containing new Frozen, Peter Pan, and Tangled mini-lands, plus an in-park luxury hotel at Tokyo DisneySea. This post will share more details and “fly-through” videos of Imagineering’s 1/50th scale model of this record-setting addition to what’s already the world’s best theme park.

For those who haven’t been following its development, the overarching theme for Fantasy Springs is a magical spring leading to a world of Disney fantasy–it’s basically a loose concept for a Fantasyland-style port that brings Frozen, Tangled, and Peter Pan to Tokyo DisneySea, with separate areas for each tied together via magical springs.

Not calling it FantaSea Springs is a huge missed opportunity, but given the level of investment, we can’t complain too much. Fantasy Springs will be the most expensive expansion to any theme park anywhere, ever. It’ll cost triple the amount of last year’s Tokyo Disneyland ‘large scale’ addition that included a Beauty and the Beast mini-land and more, and over double the cost of Star Wars: Galaxy’s Edge. We don’t yet have an estimated cost of the EPCOT overhaul, but we also don’t know what’s being built since some of those plans have been paused…

Over the last year-plus, it has been full steam ahead of Fantasy Springs at Tokyo DisneySea, with construction moving forward even during the closure of Tokyo Disney Resort and states of emergency in Japan. We haven’t seen this ourselves in over a year, but see regular photos on social media from our friends in Japan. It is now very vertical and coming along nicely for its fiscal 2023 opening.

The luxury hotel now appears topped out, its signature golden dome has been installed, and the green show buildings for each attraction are fully built. The operative word for all of it is massive. It’s also quite impressive that construction has progressed from site prep work to enclosure in the span of ~16 months (the difference between my last photos and the current status is striking). Meanwhile, Walt Disney World managed to knock down one side of Innoventions in that same time.

Above is the aerial concept art Disney and OLC have released for the expansion. It’s from the perspective of the new hotel’s golden dome, which is in the middle of that.

For some pre-video context, the new hotel will abut Bayside Station, so more or less “across the street” from the Hilton and Sheraton. The Tangled and Peter Pan areas will roughly be located behind Arabian Coast and Lost River Delta (respectively) in Tokyo DisneySea, and the Frozen area will be behind Toontown and the Beauty and the Beast area in Tokyo Disneyland.

All of the fly-through videos begin by entering through an archway that reveals Fantasy Springs. This entrance will be located at literally the deepest point of Tokyo DisneySea, between Raging Spirits in Lost River Delta and Jasmine’s Flying Carpets in Arabian Coast. Save for a parking lot and backstage facilities, nothing is being lost to gain Fantasy Springs–it’s pure expansion.

Here’s the scale model fly-through video of the new Tanged area, which will be immediately to the right after entering Fantasy Springs:

This Tangled area will feature a restaurant inspired by the Snuggly Duckling, the tavern inhabited by boisterous ruffians in the film. A version of this already exists as Tanged Tree Tavern, a counter service restaurant at Shanghai Disneyland.

The area will also offer a boat ride where guests board gondolas for a romantic tour of Rapunzel’s “best day ever” as she journeys with Flynn to the lantern festival. This will culminate in countless flickering lanterns that illuminate the attraction’s finale while Rapunzel and Flynn sing an iconic song from the film. Sounds better than bathrooms. Maybe.

Next up is the Arendelle-inspired area scale model video. Another restaurant will be located here, and set inside Arendelle Castle at the foot of beautiful, snow-capped mountains.

The Frozen mini-port is set after the first film, and will feature a ride telling the story of Elsa and Anna with iconic songs from the film and surprising thrills.

Finally, the Peter Pan area. This will be home to two attractions and a restaurant, and showcase the fantastical world of Never Land. The landscape will include mountains, Captain Hook’s pirate ship, and Skull Rock. One attraction immerses guests in the oversized world of Pixie Hollow. Never Land’s restaurant will be inspired by the Lost Boys and their hideout, affording lovely views of Never Land that Guests can enjoy while they dine.

The main Peter Pan attraction will be a boat ride as guests board boats to chase Captain Hook and his crew of pirates who have captured Wendy’s younger brother; Tinker Bell sprinkles the boats with pixie dust, Guests fly through Never Land on an adventure that features iconic music and dynamic 3D imagery. Based on the description and some semi-informed speculation, we’re expecting the main Peter Pan attraction to use technology similar to Pirates of the Caribbean: Battle for the Sunken Treasure at Shanghai Disneyland, and be the port’s flagship attraction. 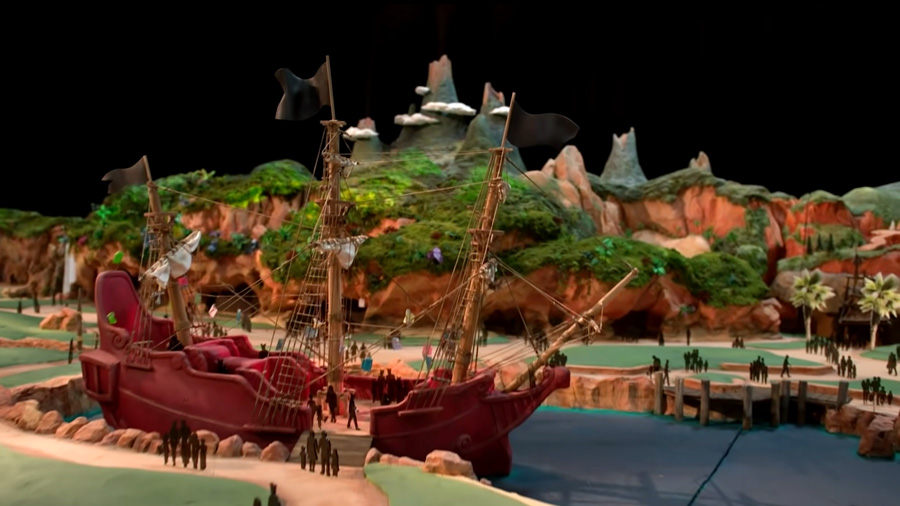 Based upon information from the Tokyo Disney Resort fan community coupled with visible construction progress and the near-certain layout of Fantasy Springs, the Frozen area will be largest of all, thanks to having both a boat ride and a table service restaurant, plus some impressive rock-work to conceal a tall theater behind it in Tokyo Disneyland.

Per unconfirmed show building sizes, both the Peter Pan and Frozen rides will be massive. The Tangled boat ride is more modest, but still large. Given the huge size of this plot of land and the lack of retail (only one gift shop in the entire port), those show building sizes are at least credible on their face. 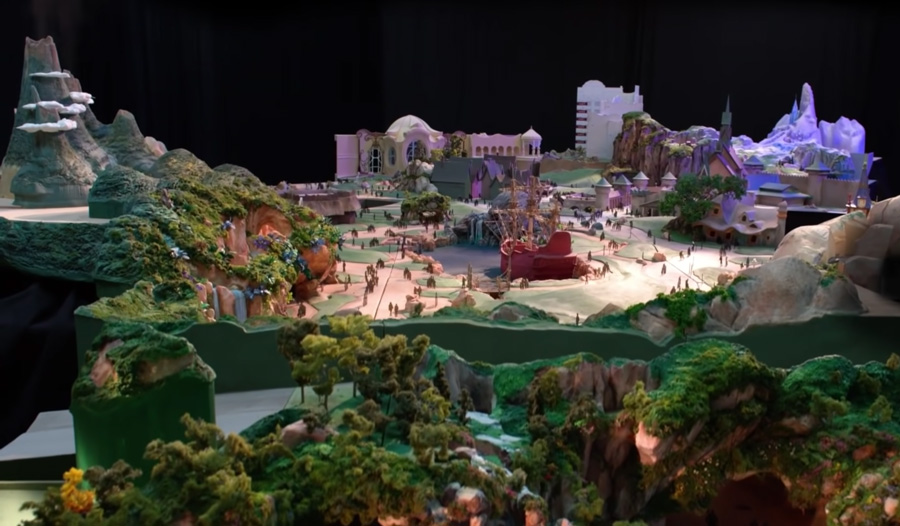 If this is your first exposure to Fantasy Springs, the model fly-through might seem a bit dry and uninspired. OLC takes a very different approach from Disney when it comes to revealing new information; this is straight-forward, letting the substance of the blockbuster expansion speak for itself. It may not be as superficially “exciting” as using fluffy language to manufacture enthusiasm for an ordinary shop for creations, but it gets the job done.

Suffice to say, we are beyond hyped for Fantasy Springs at Tokyo DisneySea, but we’ve also been very closely following its development. While initially apprehensive about Tokyo DisneySea losing its more sophisticated quality, the park admittedly does need more for younger audiences, and the port’s ambition level is just off the charts. As should be expected with a budget of $2.3 billion for what’s essentially a single land and hotel. We can’t wait to get back to Japan, finally experience the Tokyo Disneyland expansion, and then by able to enjoy yet another large scale expansion in 2023!

Are you excited for Fantasy Springs at Tokyo DisneySea? Happy to see several rides and only one gift shop? Which area–Peter Pan, Tangled, or Frozen–is most intriguing to you? Do you find this massive construction project more compelling that other additions at Disney Parks around the globe or not? Any questions? Hearing your feedback–even when you disagree with us–is both interesting to us and helpful to other readers, so please share your thoughts below in the comments!