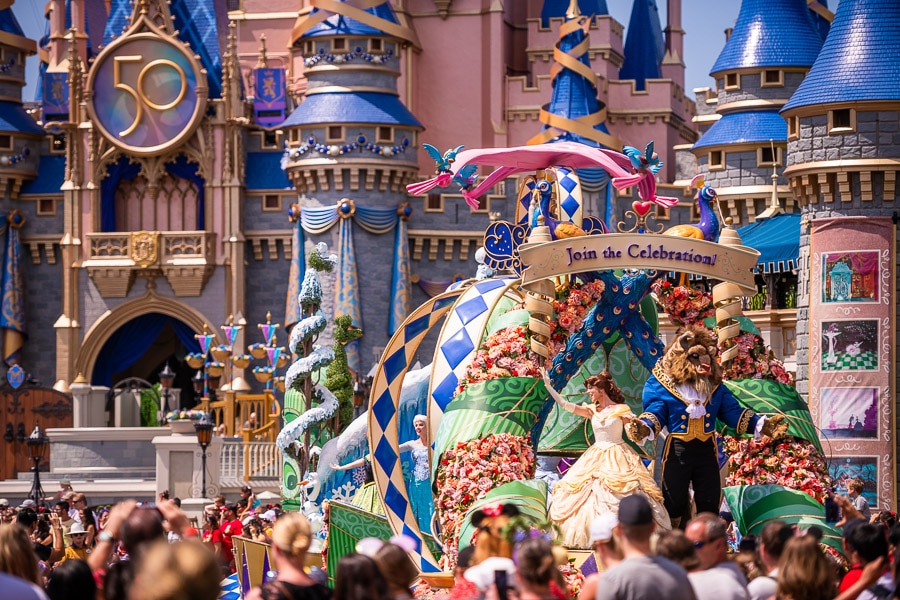 Festival of Fantasy is the daytime parade in Magic Kingdom at Walt Disney World. This guide offers viewing recommendations for the best & worst spots, photography tips, and whether it’s worth a Genie+ Lightning Lane selection. (Updated June 13, 2022.)

Let’s start with brief background. Disney’s Festival of Fantasy Parade debuted almost a decade ago as part of the New Fantasyland expansion of Magic Kingdom that also added Be Our Guest Restaurant, Seven Dwarfs Mine Train, and Under the Sea ~ Journey of The Little Mermaid. It was dark for almost two years until returning in 2022 with performers and parade floats removed.

We’ve seen Disney’s Festival of Fantasy Parade many, many times and we absolutely love it. Unlike almost every Magic Kingdom parade in recent memory, this parade actually feels ambitious, and large in scale and scope. The parade floats are all large, detailed and have a lot of substance to them. A lot of films are featured, including The Little Mermaid, Dumbo, Pinocchio, Peter Pan, Sleepy Beauty, Tangled, Beauty and the Beast, and more.

Of course, there’s one float that stands out above all else. The float that has captured everyone’s attention is the steampunk-esque Maleficent dragon float, and this is understandable because it breathes fire, but the Tangled, Peter Pan, and Monstro floats don’t garner nearly as much attention, despite being quite well done. 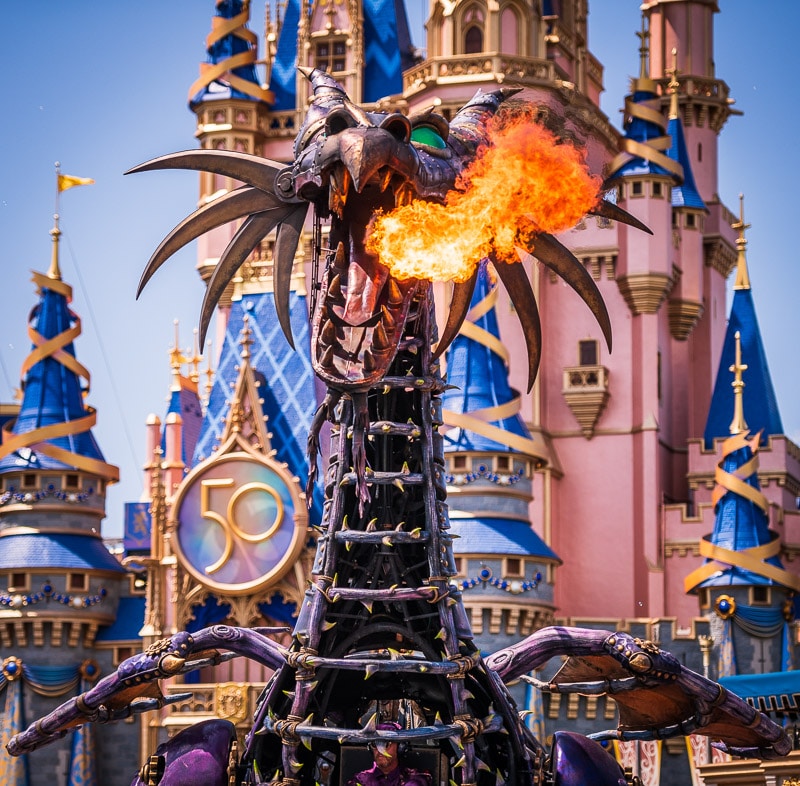 Add to this performers in costumes that have a lot of detail and are, in some cases, a bit darker and more interesting than the ‘fantasy fluff’ you’d expect to find in a Magic Kingdom parade, a catchy soundtrack, and a great energy, and you have a parade that’s a real winner. 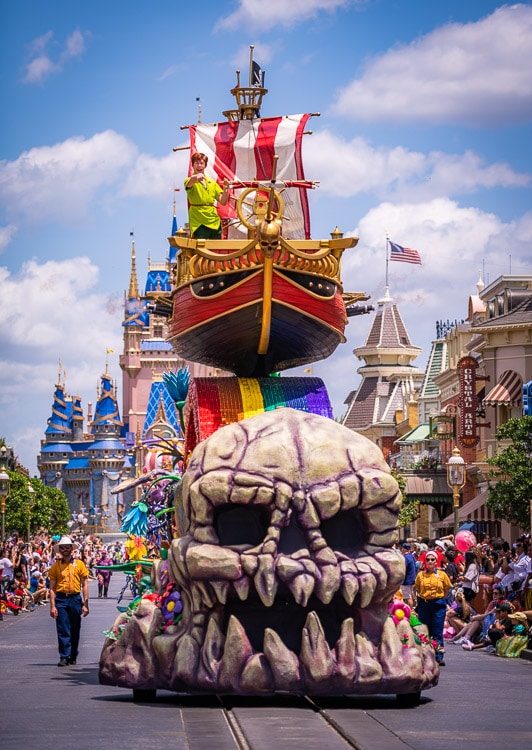 My main criticism of the parade is that it is stylistically disjointed. Every float seems to have its own look, with no really aesthetic yarn or semblance of a unified style. Even this is a relatively minor quibble.

For one thing, numerous films are represented and each has its own distinct visual identity. For another, some of Festival of Fantasy Parades floats were “hand me downs” from Tokyo Disneyland. Still, it’s a fantastic parade with some very cool-looking floats, a catchy soundtrack, and just a great vibe to it in general. 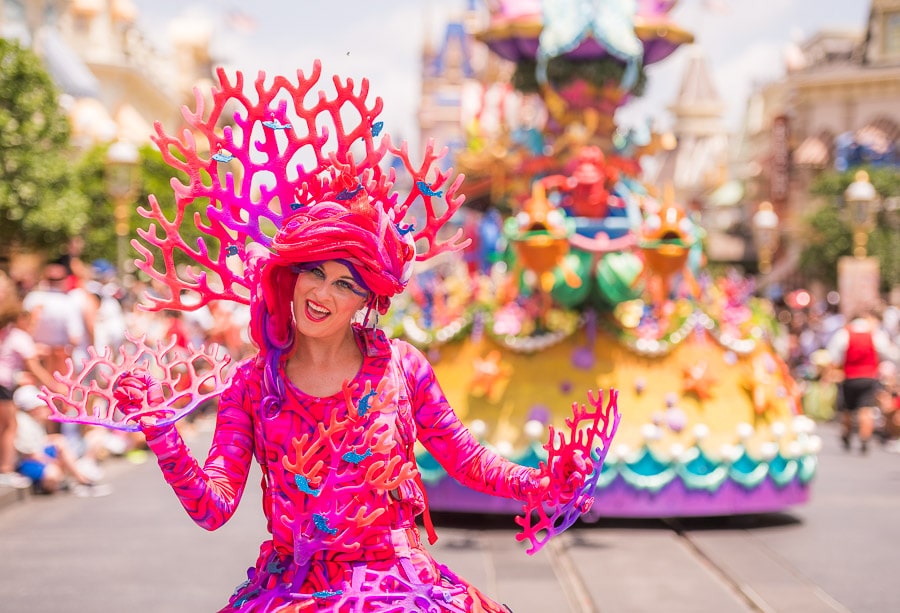 Festival of Fantasy Parade is performed twice daily, usually once at noon and another time at 3 pm or 4 pm.

In our experience, each is about equally good from a crowd perspective. There’s a natural desire among guests to catch the first showing, but that’s at least partially offset by that coinciding with lunch. 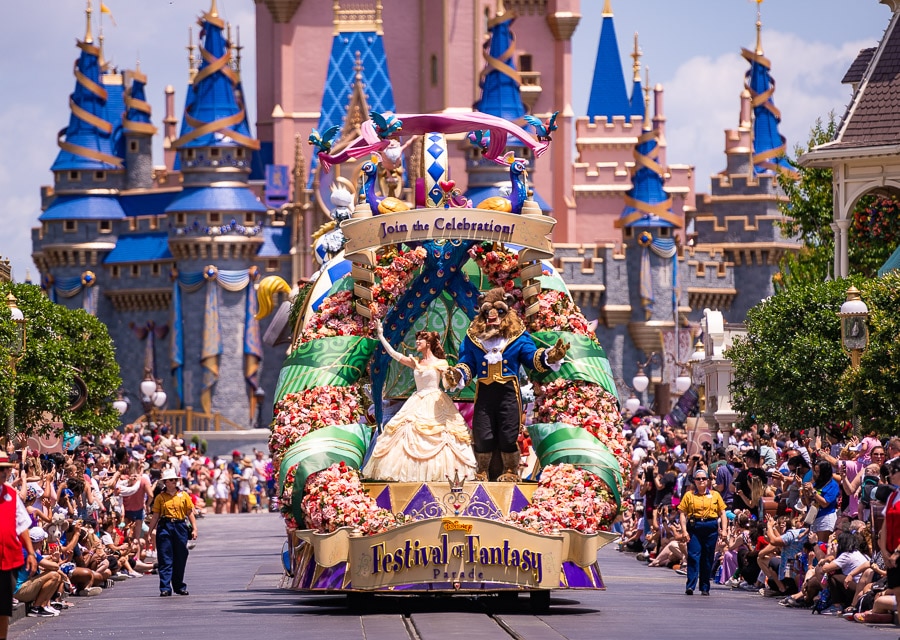 If you want the best experience and photos, there’s only one place where you should watch the Festival of Fantasy Parade, and that’s Main Street. This is because it’s a fantasy themed parade, and of the places the parade travels, only the backdrop of Cinderella Castle is fitting (ironically, the parade does not go through Fantasyland).

With that said, the sidewalks lining Main Street are among the worst viewing locations. Not only are these the most popular spots–meaning you have to arrive earlier or fight larger crowds–but you won’t get a clean background with Cinderella Castle. Instead, you’ll have the other side of Main Street and crowds of people as your backdrop. These spots have way more downside than upside, so we’d recommend avoiding them. 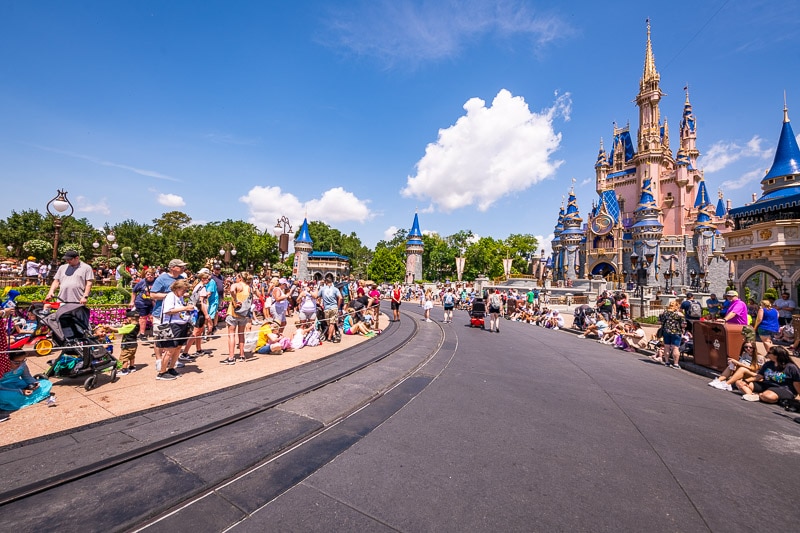 With that said, there are two specific locations around Main Street that remedy this issue and are among the best locations for viewing Disney’s Festival of Fantasy Parade. The first is the Hub or Central Plaza, which faces Cinderella Castle. 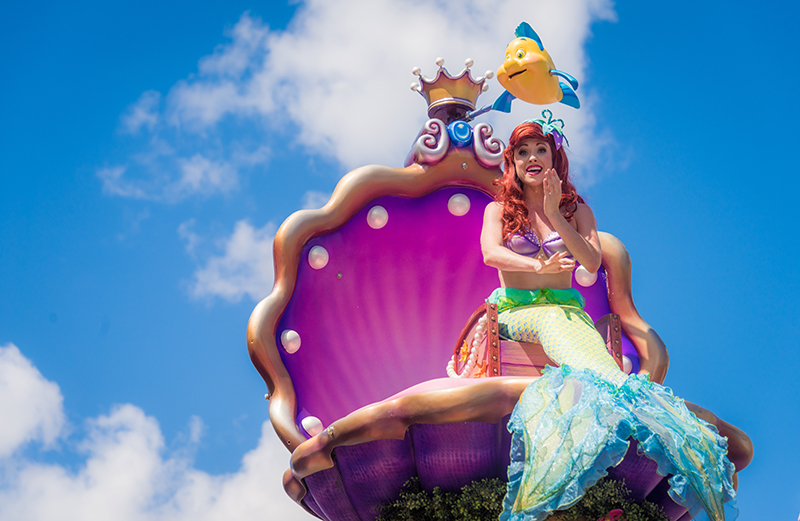 Not all views in the Genie+ section are of equal quality, but if you’re facing Cinderella Castle, it’s tough to beat this location.

If you’re unfamiliar with Genie, see our Guide to Genie+ at Walt Disney World & Lightning Lane FAQ for all of the foundational need-to-know info about this replacement for free FastPass+. This whole system is confusing and convoluted, so you might have a question or two-dozen. That answers all of the most common ones we’ve been receiving from readers. 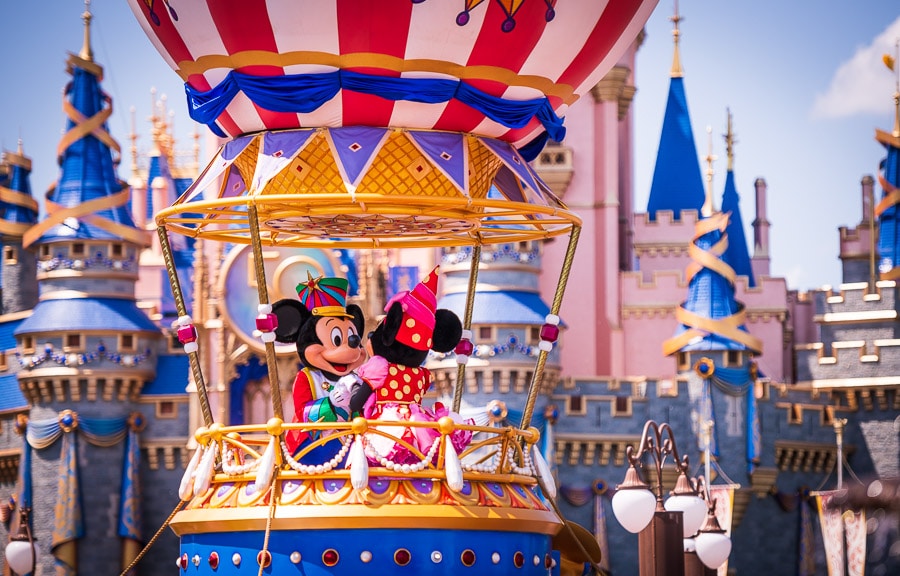 Festival of Fantasy Parade passes directly in front of you, allowing for postcard-perfect images of the characters, floats, and performers with Cinderella Castle in the background.

In my opinion, this is the #2 location for watching Festival of Fantasy Parade at Magic Kingdom. Fortunately, the #1 location doesn’t require paying money for Genie Plus! 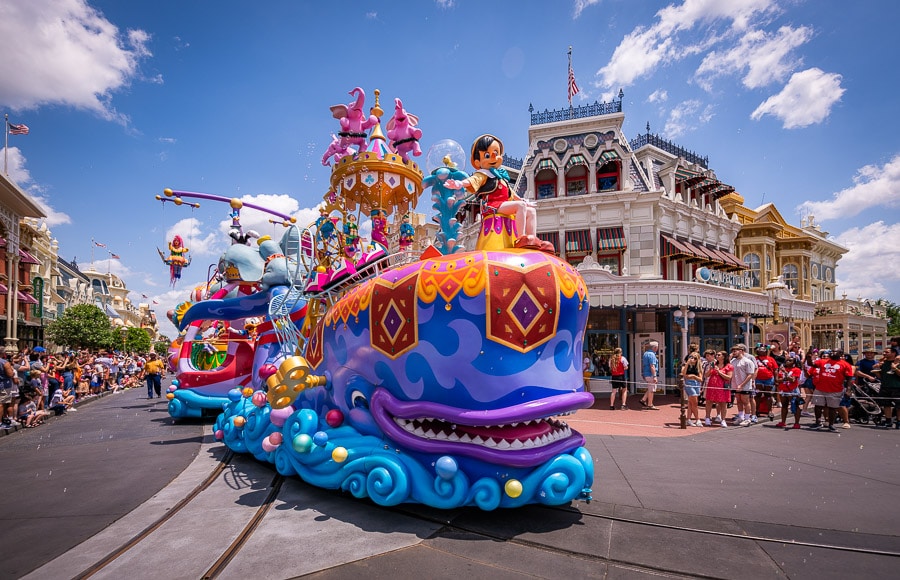 The #1 location for viewing Disney’s Festival of Fantasy Parade is at the end of Main Street in Town Square.

For this, we recommend the area behind the flagpole and Sharing the Magic statue, on the curb that faces Cinderella Castle. However, we’ll get a little more specific than that… 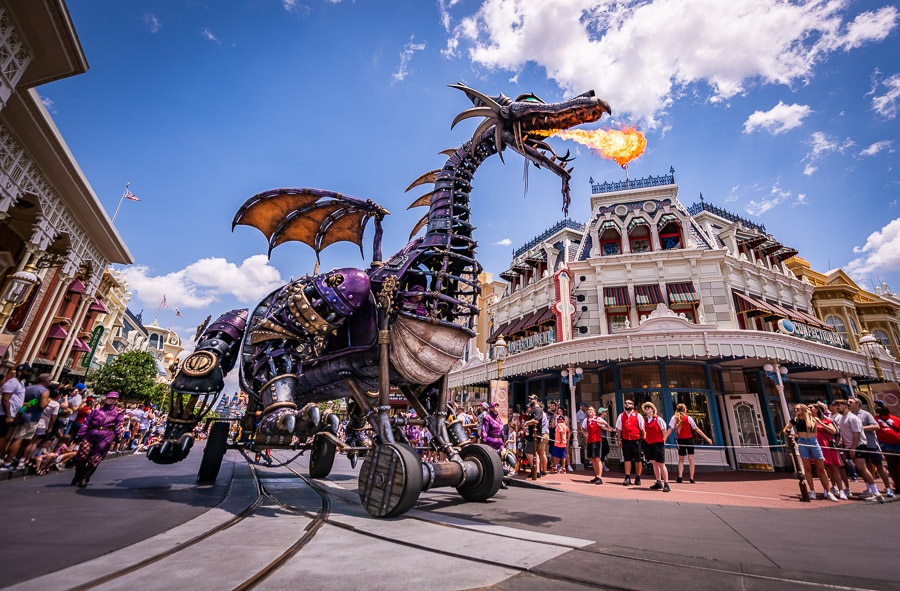 Ideally, stand off-center to the left side of this area by a few feet.

Those of you who are driven bonkers by asymmetry might have a difficult time with this recommendation, but it’s for an important reason. The parade is coming directly towards you, so it can be difficult to photograph the next float and performers until the previous one passes. This happens faster to the left side, since the floats turn to the right. 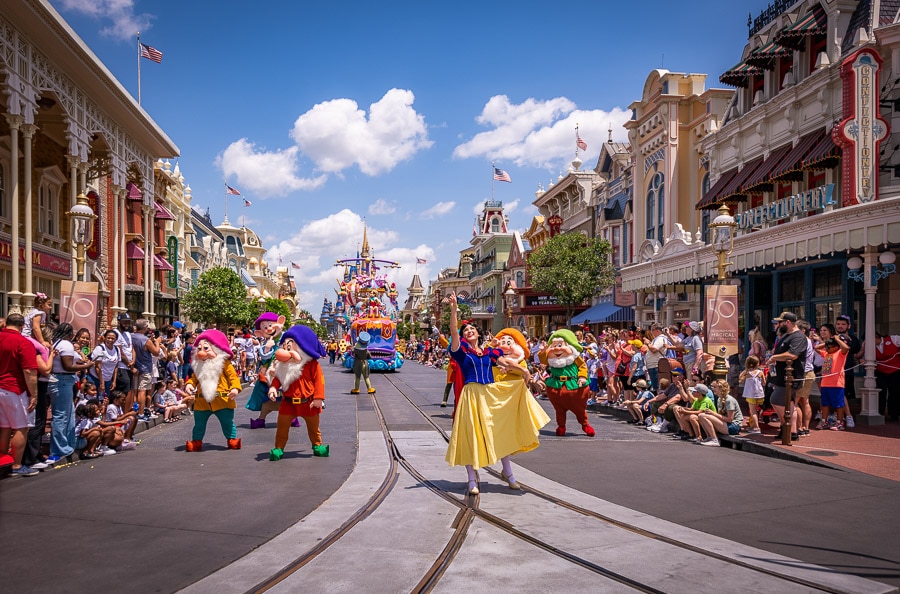 This isn’t a huge deal–and is probably most important to photographers who will be using zoom lenses to capture floats in the distance, with Cinderella Castle in the background.

For reference, the above photo of Snow White and the Seven Dwarfs was captured while the prior float is still rounding the corner. The below photo was captured with a telephoto lens by zooming past those same performers. 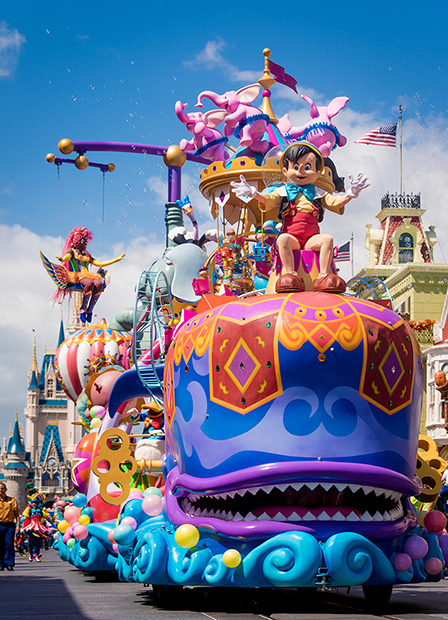 All of this would be more difficult to impossible if standing in the dead center or off to the right.

Moreover, the asymmetry isn’t noticeable once you’re zooming in on specific floats or performers. To the contrary, having Cinderella Castle peek out behind the parade improves the composition of your photos. 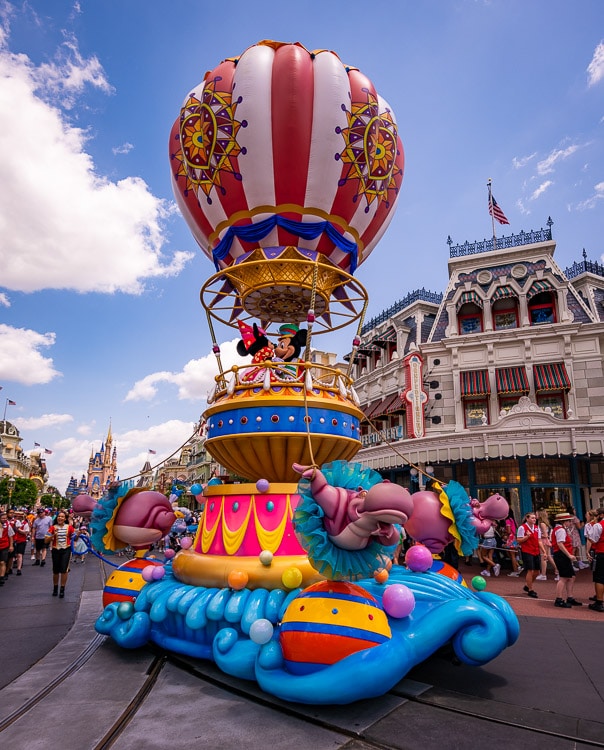 This also can be an easier spot to score. Another big reason we love and recommend this area for parade viewing is that it’s a “secret spot” that doesn’t draw large crowds long in advance of Disney’s Festival of Fantasy Parade–because it doesn’t even exist!

If you’re having a hard time understanding or envisioning where this is, just follow the lead of other guests who start lining up here before the rope appears. Failing that, linger in the second row on the left side behind the flagpole, and jump into position once the rope goes up. 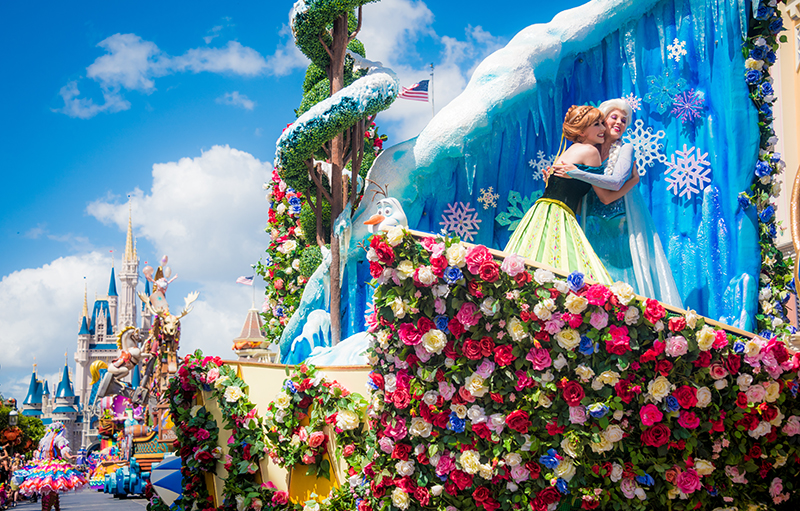 Another good spot on this end of Main Street is directly in front of the Train Station. This also offers a view back at Cinderella Castle, albeit not as clean of a view.

If you opt to stand anywhere else on Main Street, consider strategically positioning yourself south of a trash can. Not for the delightful atmosphere or garbage-themed scents, but because it’ll give you a buffer between you and other parties, while also giving you a better chance at (some) photos with Cinderella Castle in the background. 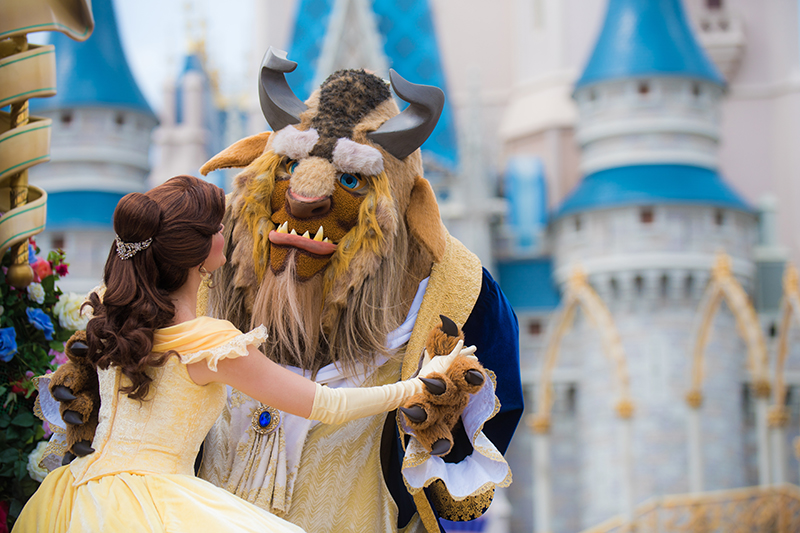 Along these same lines, the Main Street, USA Train Station itself offers a nice and unique view of Festival of Fantasy. Unfortunately, it’s also a location where guests frequently camp out in advance (or that gets blocked off for VIP guests on occasion).

There are a lot of different locations from which you can shoot the parade to take advantage of this perspective, so it isn’t a “spot” per se, and it should be easy to snag one of these locations so long as you show up over 30 minutes before the parade steps off (adjust that time up if the Magic Kingdom is busier than average). 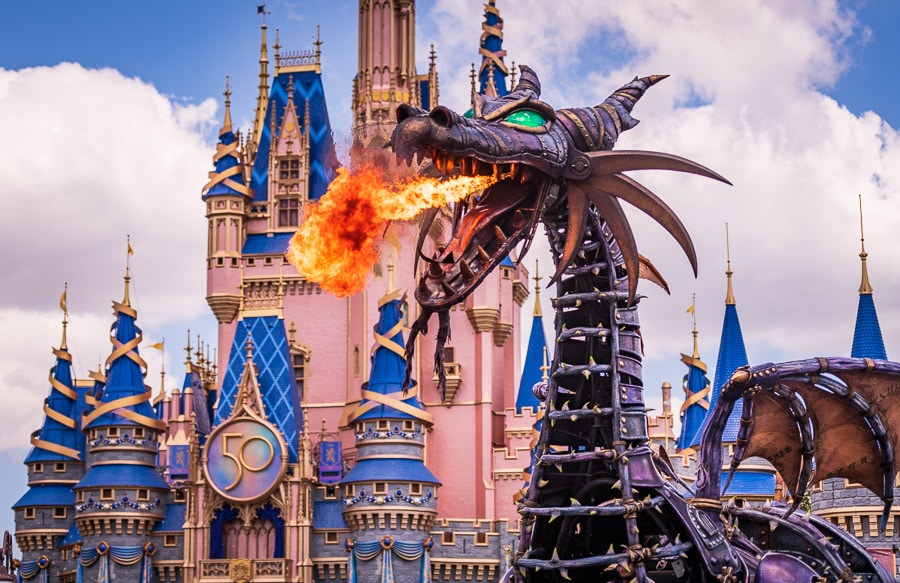 Circling back to the Central Plaza, our other recommendation closer to Cinderella Castle is the outer ‘ring’ of this area.

This is basically the same view as the Genie+ Lightning Lane reserved section. It gives you the view and backdrop pictured above in the Maleficent dragon photo. 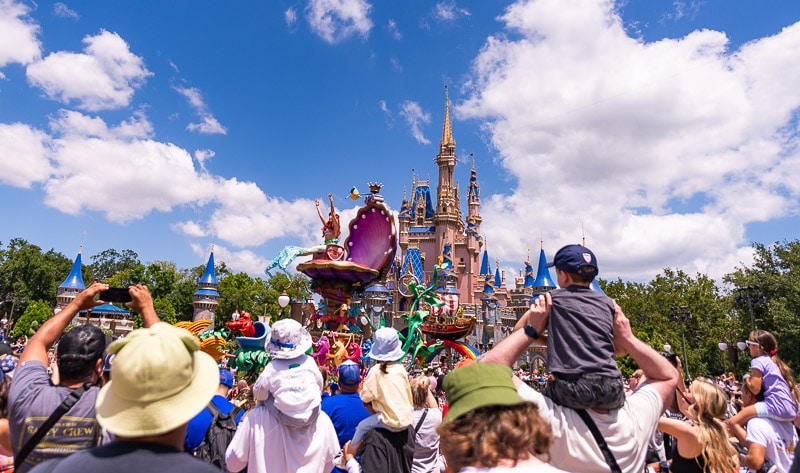 This area gets incredibly crowded, and can have several rows of people, including the dreaded last-second shoulder kids.

If you’re not going to be in the first row, our recommendation would be to drop back even further, putting distance between you and the crowd. You won’t see the ground-level performers this way, but you wouldn’t regardless. You’ll also benefit from not having kids, phones, and heads directly blocking your field of view. 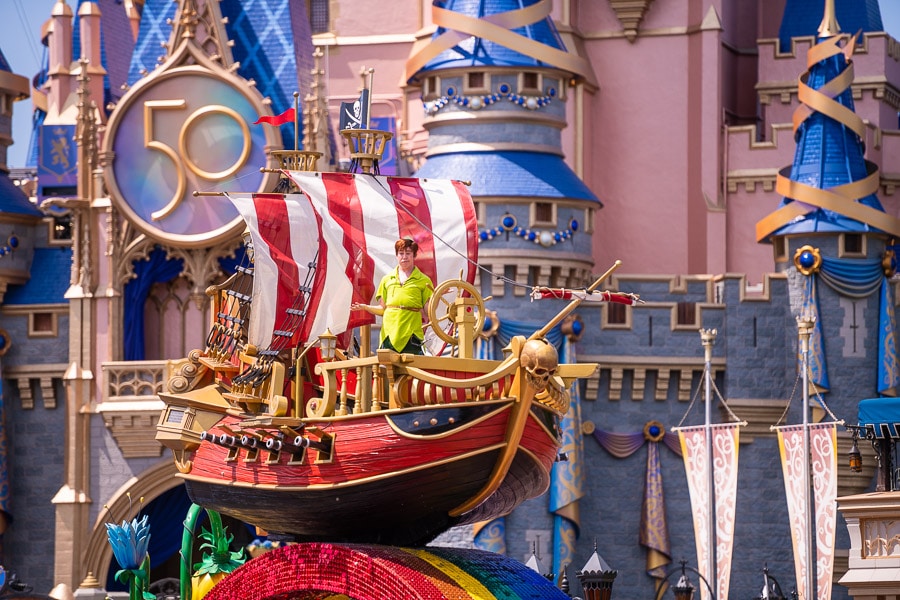 The two photos above were essentially taken back-to-back.

The only difference is that I dropped back about 10 feet between the two. This gave me a better, less obstructed view. There are also some trees over on this side of the Central Plaza that offer shade. 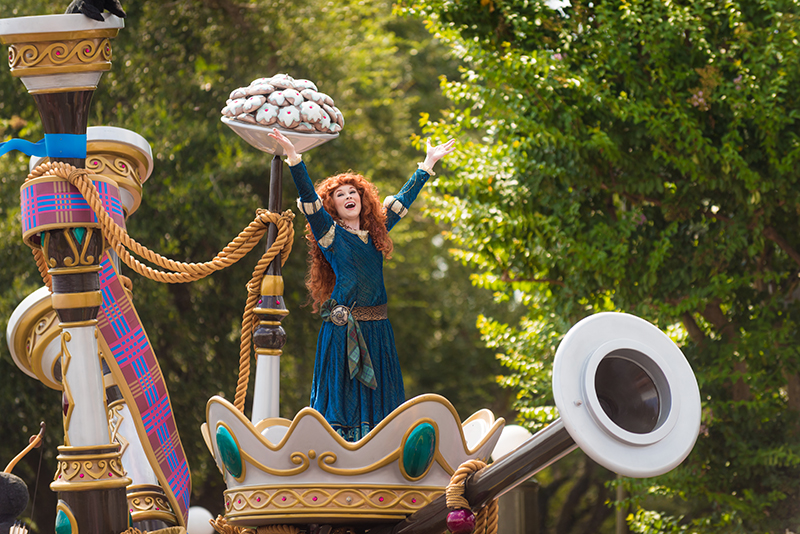 That’s it in terms of my recommended locations. Locations in Liberty Square and Frontierland are less crowded than Main Street, but it’s a bit of an incongruous experience seeing a fantasy parade in the wild west or colonial America.

If you find yourself somewhere in Liberty Square or Frontierland, I’d just look for a spot that will allow you to shoot the floats on a neutral backdrop, such as trees or blue sky. To accomplish this, stand on the side of Frontierland that has buildings, shooting towards the Rivers of America. Still not the best spot, but less crowded and a good way to photographically made lemonade out of lemons. Personally, I’d choose these spots over the sides of Main Street USA. 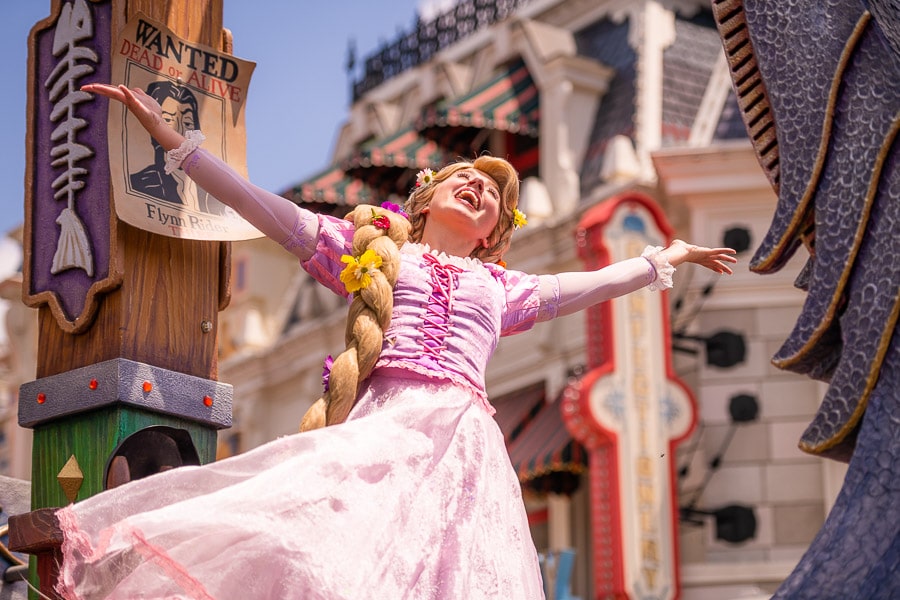 On another note, we are not fans of either the Festival of Fantasy Dining Package. The cost of this upcharge offering is simply not worth it. (This still hasn’t returned as of Summer 2022, so it’s temporarily irrelevant. If it does come back, we don’t recommend booking it.)

This is especially true given that Festival of Fantasy is not particularly difficult to watch. It’d be one thing if you had to camp out for over an hour or securing the best spots was impossible without the package. However, that’s not the case. 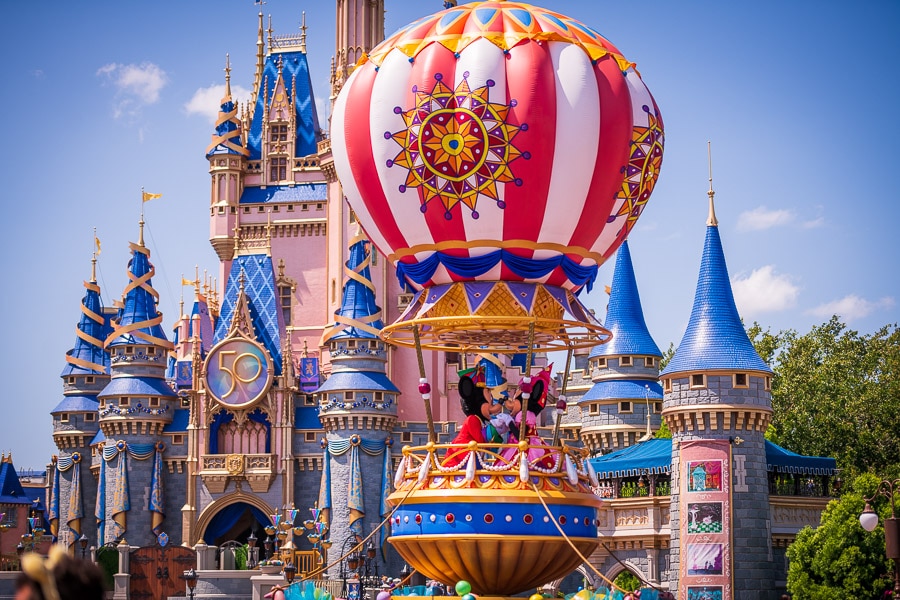 Hopefully this Guide to Disney’s Festival of Fantasy Parade has provided you with insight as to where to view the parade (if you don’t already have a favorite spot) and where to avoid. As mentioned above, the Genie+ viewing area is easiest and offers a great view, but that does come at the cost of a different Lightning Lane selection, so the opportunity cost may not make it worthwhile.

For most Walt Disney World guests, the “secret spot” at the end of Main Street is going to be the best bet. It can usually be grabbed shortly before the parade starts and offers a spectacular view. If you don’t have any experience with Magic Kingdom parades, the only difficulty is going to be finding this location as it literally does not exist as a viewing area until shortly before showtime.

Regardless of where you watch it, we do highly recommend that you make time to see Disney’s Festival of Fantasy Parade–potentially more than once. Consider staking out a front row location for your first viewing, and then a laid back spot for a subsequent performance. Even almost a decade after its debut, we still love Festival of Fantasy, and watch it frequently when we’re in Magic Kingdom. The fire-breathing Maleficent remains a showstopper, and it’s worth catching the parade for that float alone!

If you’ve seen the Festival of Fantasy Parade, what did you think of it? If you haven’t, are you looking forward to this new Walt Disney World parade? Any tips of your own for best viewing locations? Do you agree or disagree with our advice? Any questions we can help you answer? Hearing your feedback–even when you disagree with us–is both interesting to us and helpful to other readers, so please share your thoughts below in the comments!