Sacré-CÅ“ur Basilica is that better option. We headed there from Cathédrale Notre Dame de Paris via the Metro after having lunch. Sacré-CÅ“ur is a bit aways from most other tourist spots downtown, located perched high upon Montmartre (a hill). To get there from the Metro station, you go through a commercial district that doesn’t have quite the same charm as Paris, but is interesting, nonetheless.

Going to Sacré-Coeur was Sarah’s idea, but we all agreed that it would be a worthwhile spot to visit, particularly in late afternoon and towards sunset. When I first saw Sacré-CÅ“ur, I did a double take, as I thought it was a distorted photo of the Taj Mahal. The dome reminds me more of Mughal architecture than Gothic styles elsewhere in Paris. I know it’s neither, which is part of the appeal: it’s unique.

Unfortunately, photos are not allowed inside the Basilica at Sacré-Coeur, and I did not break this rule. If you search via Google, you can find photos of the interior. You should look for them, as it’s absolutely stunning. We sat and simply gazed up at the ceiling for a while because it was so stunning. I’m actually a bit surprised it was not featured in Impressions de France, but then again, they probably didn’t want the film to be too Paris-heavy.

Sacré-Coeur had a totally different atmosphere than Notre Dame–it felt like an actual place of worship. Obviously, there were plenty of tourists, too, but the rules here dictated a different code of conduct, and most visitors respected that. Sarah and I both found the overall experience here to be far better than Notre Dame. (Really, though, I’d consider both must dos; they are dramatically different from one another.

After we had spent a good amount of time inside, we headed back out. Mark decided to climb out to the observation area. Located on Montmartre hill on the outskirts of the city, Sacré-Coeur offers great views of Paris.

I had tweaked my back in my sleep and was not feeling up for another few-hundred stairs, so we decided to sit it out. In hindsight, I wish we would’ve done it, but on the plus side, we got to see an amazing street performer…

Seriously, this guy was awesome. Part acrobat, part soccer player, it was pretty amazing to watch him.

Tons of visitors were gathered on the steps to Sacré-Coeur, and pretty much the entire crowd was transfixed.

Above is a video of him in action. 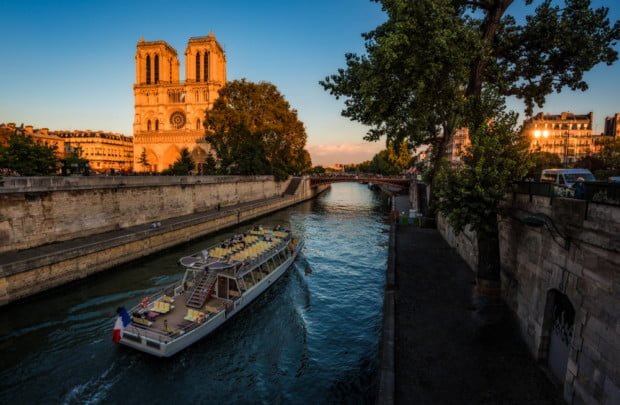 Since there were so many people on the lawn and steps at Sacré-CÅ“ur, we decided to head elsewhere for sunset. We retraced our steps, heading back to Notre Dame… 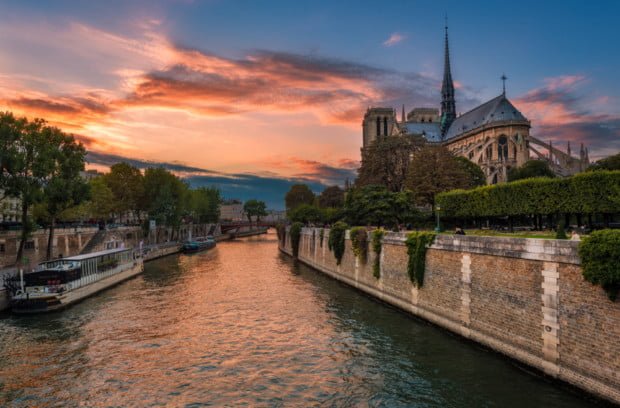 For some reason, we walked the long way around (we walked nearly a mile between the two above photos), but this was our ultimate sunset spot. This same bridge is where the Bastille Day balloons are released during Impressions de France (just to tie things back to Epcot). 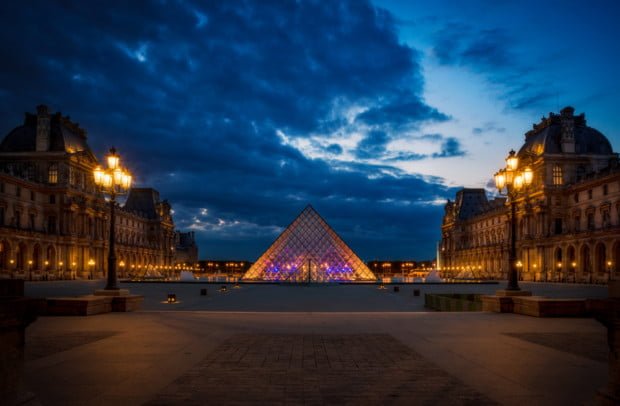 From there, it was off to The Louvre for some dusk photos of the pyramids outside. Although we’ve been outside The Louvre a few times, Sarah and I still have yet to go inside the museum. I think next time we will buy a museum pass and spend some time there. 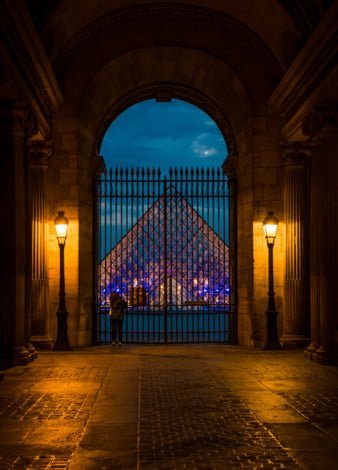 On this particular day, we couldn’t even get to the courtyard of The Louvre. It appeared there was a private event taking place after hours, and Sarah said she thought it was for Paris Fashion Week. In that case, I’m going to go ahead and blame the Kardashians…just because. 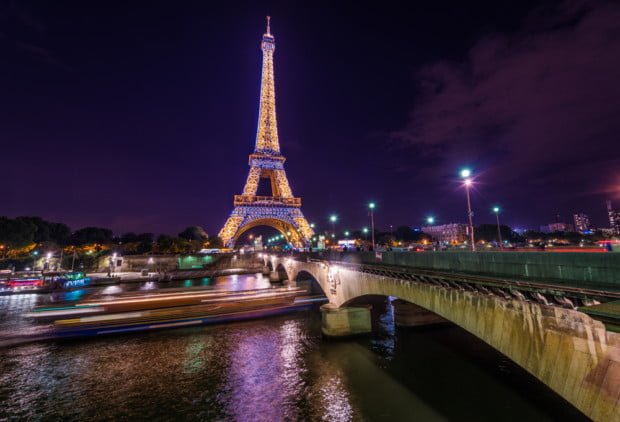 We wandered all over the place after that, but I didn’t seem to take many photos along the way. Even though the Metro is nice (and some of the stations are unique and cool), walking through Paris is such a pleasant experience that we rarely use it when visiting.

The architecture, all-around, is beautiful in Paris, but it goes beyond that. Even the simplest things seem to be prettier in Paris. From park benches to walkways to fountains and beyond (even the advertising columns!), there’s a level of detail and quality with which few other places can compete. 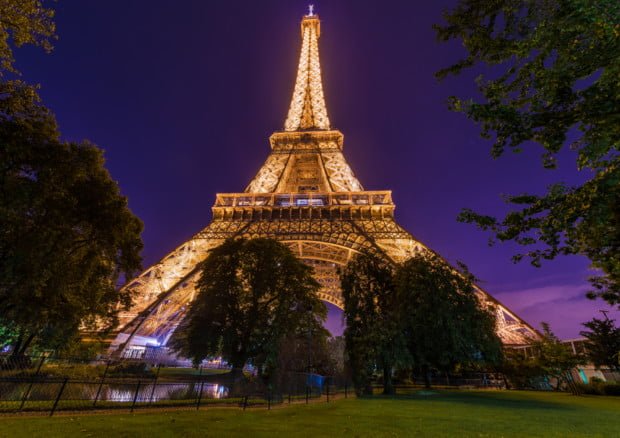 We finally made our way over to the Eiffel Tower, where we spent some time wandering around. We had not gone directly under it that morning, so we were a bit taken aback to see a security perimeter set up under the Tower itself.

This was new since our last visit, and was not altogether surprising given the unrest in France of late. Paris has an almost Fantasyland-like quality that overcomes you and pulls you out of reality; like Walt Disney World, it’s easy to not think about it in “real world” terms (as naive as that might sound). At no point did I worry about safety in France, but this momentarily pulled me back to reality. 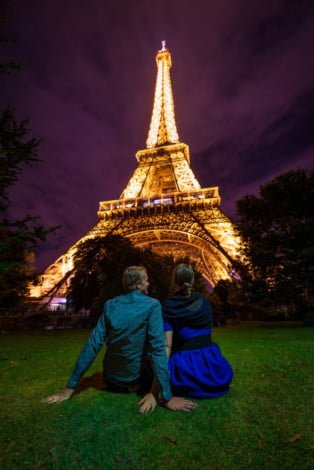 Finally, the last shot of the evening. If I were to make a “pitch” to convince people to visit Paris for its romanticism, beauty, and history, this is the type of photo I’d use to accompany that pitch.

The irony would be that this scene, under the Eiffel Tower, does not match the mystique. Obviously, the Eiffel Tower is beautiful and a symbol of France. However, at this particular moment, there were numerous other people on the lawn (some of whom were, ahem, ‘going at it’) and a half-dozen hawkers trying to sell cheap champagne.

While Paris is one of the most incredible cities on earth (I’d put it up there with Kyoto, Japan for the top slot), I think the Eiffel Tower–the very icon of all that is great about Paris–is actually lacking in those qualities. I don’t know, perhaps it’s because I mentally idealized the Eiffel Tower so much prior to our first visit and was surprised that the reality was far different from that, but I’m not a huge fan. It’s neat to see, but aside from its symbolic stature, I would not put it on a Paris top 10 list.

After that, we decided to call it a night. If you’ll recall, our Airbnb was 45 minutes from the Eiffel Tower by foot; rather than walking that (I ended up logging 40,614 steps and 18.13 miles that day per Fitbit), we opted to take the Metro back.

The next day was my favorite day of the trip: our visit to the Loire Valley…

If you enjoyed this post, we’d really appreciate it if you’d share it via Pinterest, Facebook, or Twitter to help spread the word. We put a lot of work into making these trip reports fun to read, and would love for more people to enjoy them! 🙂

Have you visited Paris? What did you think of it? Any favorite spots? Regardless of whether you have or have not visited, what are your impressions of Paris? Thoughts on our Impressions de France tour? We’d love hearing some feedback on the report thus far, so please share any other thoughts or questions you have, in the comments!