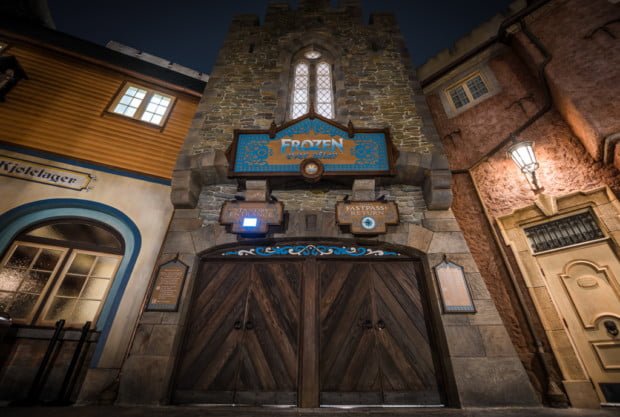 This post reviews the new Frozen Ever After attraction in Epcot, with strategy for experiencing the ride with short a wait as possible. Page 1 of the post is spoiler-free, covering tips for minimizing your wait if you’re unable to score FastPass+ for Frozen Ever After. Page 2 features on-ride photos and my review of the attraction. (Last updated February 18, 2018.)

Let’s start with some tips for experiencing Frozen Ever After. As the newest attraction at Epcot in Walt Disney World and one based on a popular film and one with a low hourly capacity, this attraction is destined to have long waits for the next several years. Even nearly two years after the attraction debuted, wait times are still averaging ~60 minutes. I wouldn’t expect those numbers to change for the foreseeable future as the attraction’s capacity is low, and Frozen has proven that it has staying power.

This is still one of the most-coveted FastPass+ selections in all of Walt Disney World, right up there with Avatar Flight of Passage and Seven Dwarfs Mine Train. It’s one you will want to score as close to the 60 day mark as you can, as availability tends to be scarce inside 30 days. Disney’s Hollywood Studios FastPass+ aren’t in nearly as high of demand, so you might even consider making Frozen Ever After FastPass+ for multiple days in case you decide to Park Hop, or in case park hours/your plans change. 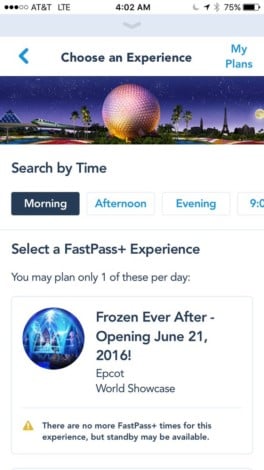 If you’re staying off-site or you otherwise aren’t able to make a Frozen Ever After FastPass+, you have a couple of options–besides waiting in a long line. The first of these is rope dropping the attraction. In an ideal world, you’d arrive at Epcot at least 60 minutes prior to park opening. This is because a lot of other people will also be arriving early, and because the turnstiles will likely open around 30 minutes prior to park opening. You also have to get through bag-check and all of that. So really, the amount of time you’re standing around waiting is minimal.

After entering the park and walking “briskly” (as much as we might think the rope drop dash should be a full-contact sport, running and throwing gratuitous elbows is “frowned upon”) towards Norway, guests are stopped in a holding area in front of the Mexico pavilion, and slowly walked from there towards Norway (you’ll see this processional in our vlog below). It behooves you to be as close as possible to the front of this pack. 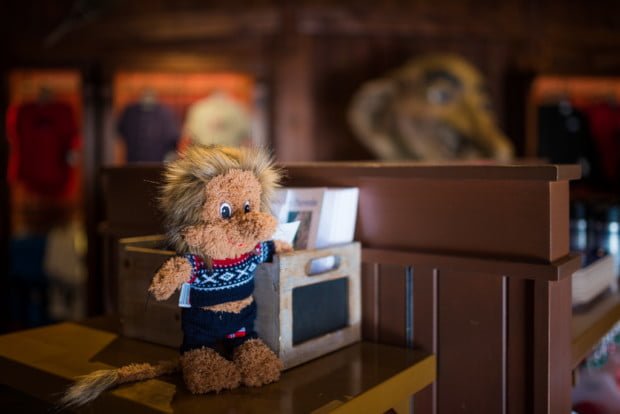 This is because the International Gateway entrance is primarily used by guests staying at the Crescent Lake resorts, whereas the front entrance is used by everyone else. Even though there are far fewer turnstiles back at International Gateway, it still is advantageous to start from back there. If you’re not staying at one of those resorts, consider taking an Uber to Beach Club and walking. 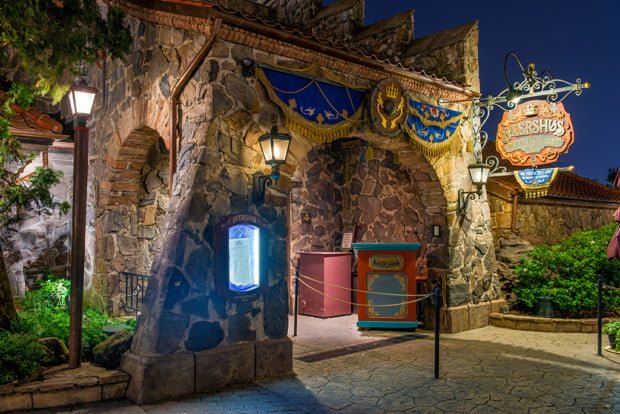 Alternatively, a pre-park opening Advance Dining Reservation (ADR) for Akershus is a great way to get in the front of the line. This is a hot ADR, so you’ll want to make this reservation as close to 180 days in advance as possible, and then cancel it if you’re able to score a Frozen Ever After FP+.

We explained to our server that we wanted to be out of the restaurant in time for Frozen Ever After rope-drop, which was clearly a common request, as she indicated she’d bring the check at the start of our meal along with to-go cups for our drinks at around 8:45 a.m.

Although our breakfast was a bit rushed, we were able to make 3 trips to the buffet, meet every princess, and still be out the door by 8:54 a.m. The Frozen Processional from Mexico arrived at 9:02 a.m. All of these times are subject to change on a day-by-day basis, so it’s probably best to play it safe and be out of Akershus no later than 8:50 a.m. Read our full Akershus Breakfast Review for more thoughts on whether this meal is worth the money. 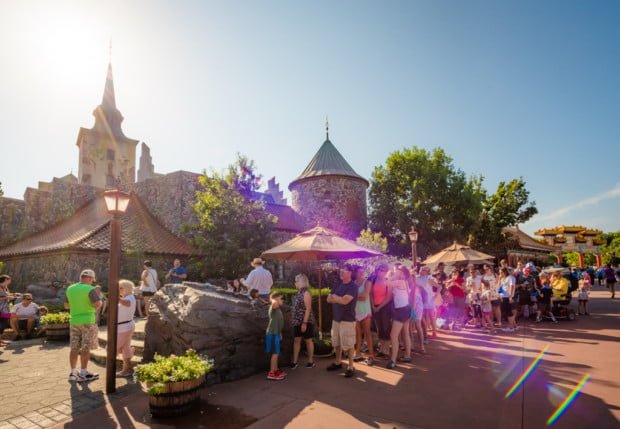 The easiest option if you’re unable to secure a FastPass+ is getting in line at the very end of the night. As is the case with all Walt Disney World attractions, so long as there is 1 minute left in the operating day, you can get in line. On most nights, this means skipping IllumiNations (which starts at park close), so you have to determine which matters more to you.

If you want to have your cake and eat it too, the best option is going to Epcot on an Extra Magic Hours evening, seeing IllumiNations, doing some other stuff, and then jumping in line for Frozen Ever After at the very end of Extra Magic Hours (which will normally be 10:59 p.m.). We did this one night, and our actual wait in line was just under 30 minutes.

Although wait times have died down from the initial levels that occurred the first few months the attraction was open, 60+ minute waits are still the norm as of February 2018. 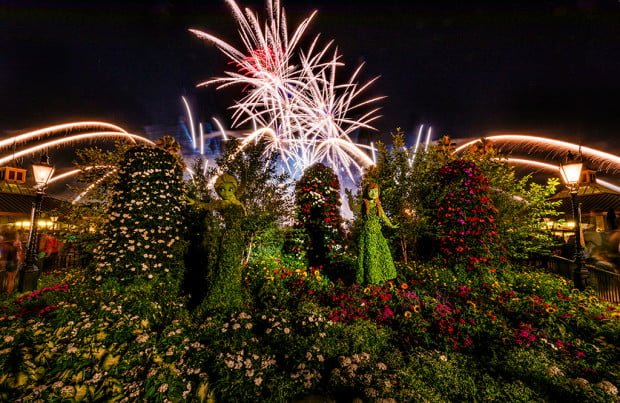 One final “last ditch” option for experiencing Frozen Ever After with minimal wait is the Frozen Ever After Dessert Party, which is offered on select nights. This starts near the current FastPass+ viewing area for IllumiNations: Reflections of Earth (which is a short walk from the Norway pavilion) and includes unlimited desserts and drinks.

Following the fireworks, dessert party guests will walk over to Frozen Ever After to enjoy a ride on the attraction with little-to-no-wait after normal park closing time. The Frozen Ever After Dessert Party is offered select dates–almost every night of the week except Tuesdays, currently. The cost is $79 per adult and $47 per child.

Personally, we think this is a pretty steep price to pay for a dessert party when you could just as easily follow one of our other strategies to experience Frozen Ever After with minimal wait, but different strokes for different folks… 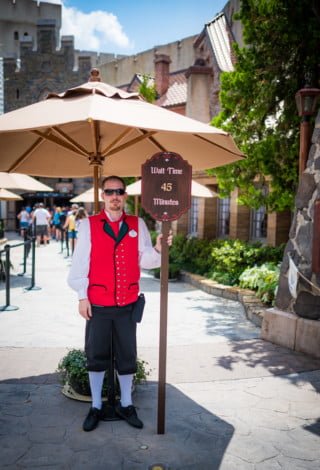 You’ll want to skip from the 4:10 minute mark to the 8:58 mark to avoid that footage if you haven’t done Frozen Ever After yet. Following the on-ride footage, we offer a brief (spoiler-free) review based upon our first ride-through:

That covers it in terms of tips for Frozen Ever After. On Page 2, I’ll offer review the attraction, rant about Epcot, and share some of my on-ride photos. If you have yet to experience Frozen Ever After, I would encourage you not to read the next page.

This isn’t some sort of tricky reverse-psychology click-bait. I’m a firm believer that spoilers diminish the initial in-person attraction experience. Your first time through, everything should be fresh, new, exciting, and you shouldn’t have any preconceived notions besides your own. You’re going to want to do the attraction regardless of anyone else’s opinions, so what does it matter what I think of it? If you’ve already ridden Frozen Ever After, seen spoilers, or just can’t help yourself, click here to continue reading on Page 2.

73 Responses to “Frozen Ever After Review & Tips”