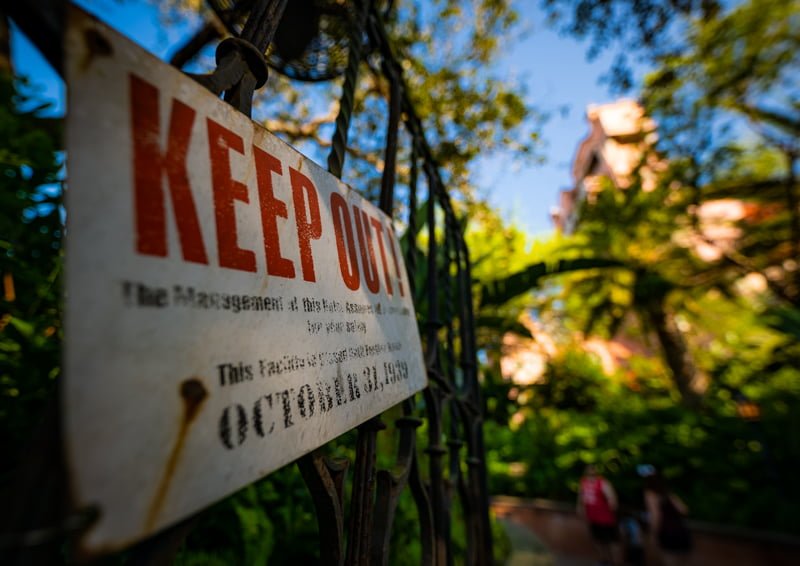 During our recent Walt Disney World trip, we braved the Toy Story Land crowds at Disney’s Hollywood Studios on several different days to see the park a couple months after this new land debuted. In this post, we’ll take a look at Star Wars: Galaxy’s Edge construction and how things currently stand as the park continues its massive transformation.

We’ve been visiting Disney’s Hollywood Studios with frequency disproportionate to its offerings on our last few trips. Part of this is to savor some of our favorite areas of the park prior to the chaos Star Wars: Galaxy’s Edge will bring with it. Another part is because the park has been changing in a lot of smaller ways that have necessitated updating some of our existing posts about it.

The Disney’s Hollywood Studios experience definitely felt different this trip. Saying the new park is coming into its own would be a stretch, as I think Toy Story Land is a smaller piece of the puzzle than both Star Wars: Galaxy’s Edge and Mickey and Minnie’s Runaway Railway. However, I do think the park has started to turn the corner. Things are starting to congeal, and there are fewer walls.

It also feels like DHS has had new life breathed into it. While my Toy Story Land Review was pretty far from glowing, this land does represent something new and is the first major addition to a park that has spent the better part of the last decade having things cut.

That may seem like hyperbole, but since the debut of Toy Story Mania 10 years ago, here are what I’d consider the major closures at Disney’s Hollywood Studios:

That’s ignoring stuff like American Idol Experience (in part because it was a one-for-one swap with the Frozen Sing-Along, and in part because I don’t care) and a number of random stage shows that were designed to be temporary, anyway. There have also likely been meet & greets subtracted and added, but again, those are more temporary in nature–and aren’t major.

There might be other things I’m forgetting, but that’s a pretty long list of cuts without substantive replacements. To be honest, with the exception of Great Movie Ride and the Osborne Lights, I don’t exactly mourn those loses (I would mourn the Studio Backlot Tour if we were discussing the original incarnation, but that was gone ages ago and Walt Disney World did the right thing by putting the truncated version out of its misery.

However, I also don’t think with Toy Story Land that Disney’s Hollywood Studios is suddenly “fixed” and now a full-day park. Even with Galaxy’s Edge and Runaway Railway, DHS will still need more. It will obviously be a full-day park to the extent that you’ll be waiting in line all day for the flagship attractions, but it’ll still be in need of a refresh of its aging stage shows. It’ll be interesting to see whether there’s an announcement on replacements for any of those in the next year.

With that pessimism out of the way, I still think that Disney’s Hollywood Studios has started to turn the corner. I hope the next 18 months (or so) includes a mad scramble to refresh and improve other offerings in the park to help soak up Galaxy’s Edge crowds, but I’m pleased with the progress that’s been made thus far. 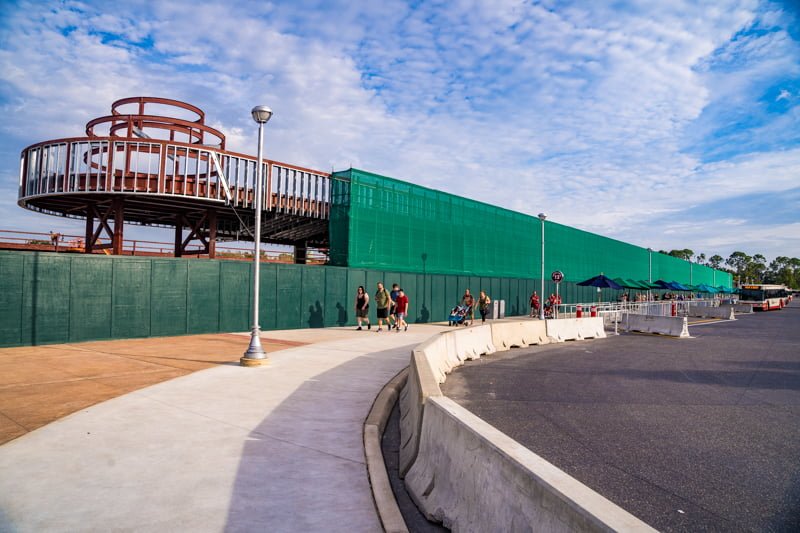 Actually, before even arriving to the park you see both the new bus plaza and Skyliner gondola station. 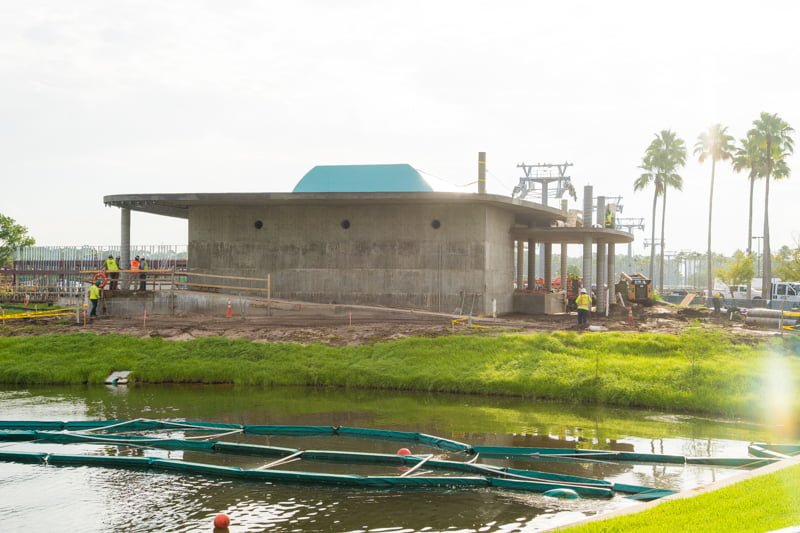 Due to all of this construction/demolition, it’s now a 13.1 mile walk from the bus stop to the front entrance. (Half marathon ‘I Did It’ shirts coming soon.)

If you walk from the Crescent Lake resorts, there’s an even longer labyrinth of walls, making the trek a full marathon. 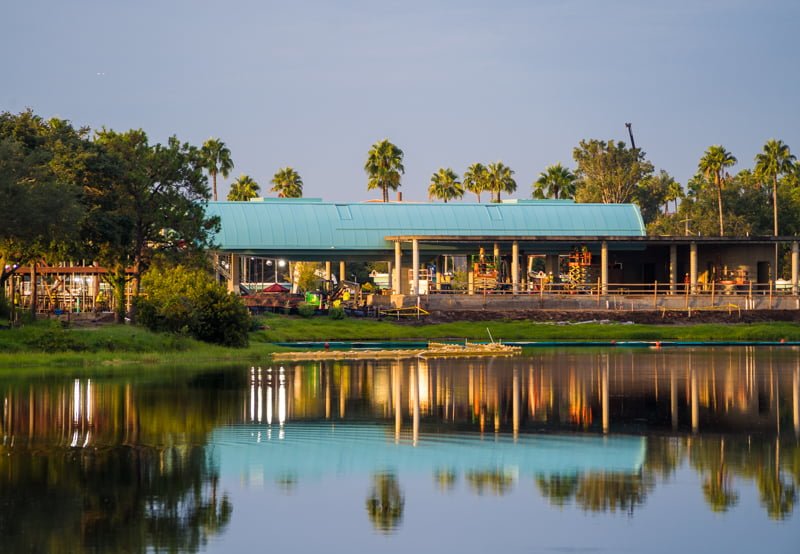 Above is a photo of the Skyliner station from the walkway to Epcot.

Inside Disney’s Hollywood Studios, the first sign of ongoing construction is Grauman’s Chinese Theater, soon to be the home of Mickey and Minnie’s Runaway Railway… 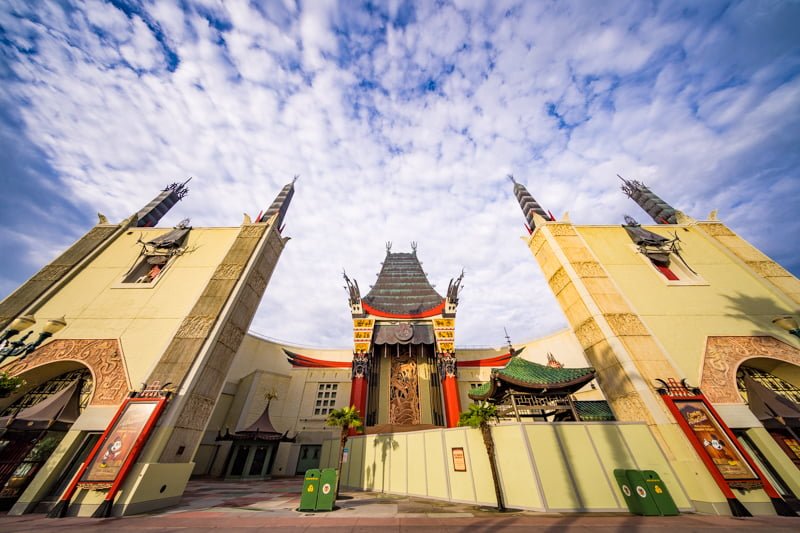 Walls have gone up around the inside of the theater courtyard as prep work is done for the marquee and entrance of the attraction.

As mentioned previously, I’m taking a wait and see approach with Mickey and Minnie’s Runaway Railway. I worry that it’ll be primarily screen-based and too short in duration, but hope to be wrong on both counts.

In an ideal world, it would be more akin to a technically-advanced version of Roger Rabbit’s Car Toon Spin 2.0, but with screens and Mickey and friends. That ride is a healthy duration, even if it’s not the 20+ minute, mixed media attraction that was Great Movie Ride. 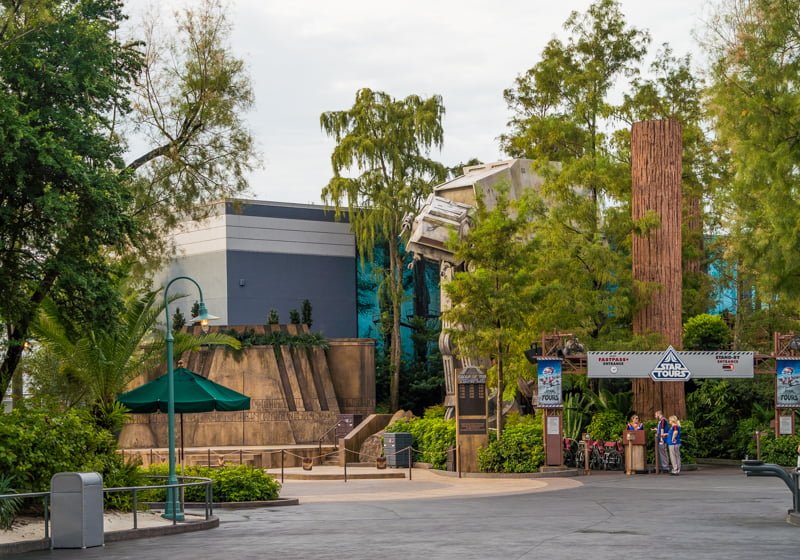 For the first hour or so Disney’s Hollywood Studios is open, Cast Members outnumber guests 320:1 on the left side of the park.

Moving right along, we come to Muppet Courtyard/Grand Avenue. The atmosphere of this area has really been muted, presumably to provide more of a low-key transition into the world of Star Wars. 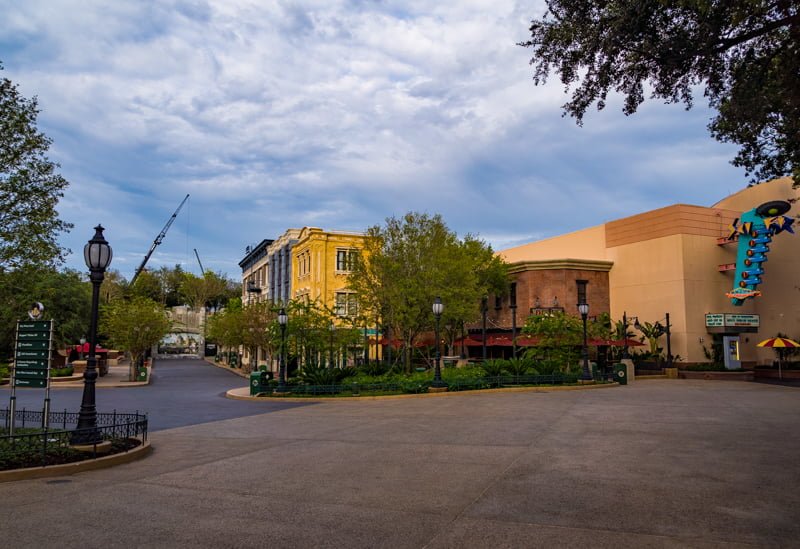 Personally, I wish it had doubled-down on its flamboyance. It’s not like anyone is going to remember what they saw in the 30 seconds before emerging from the tunnel into Star Wars: Galaxy’s Edge.

We haven’t heard anything lately about rumor that a Muppets show akin to “The Muppets Present… Great Moments in American History” is being considered for Grand Avenue but we sure hope that’s still going to happen.

Supposedly, this would consist of the Muppets performing renditions of the various Star Wars movies in the upper level of BaseLine Tap House. The idea is that this would be entertainment for guests waiting to enter Galaxy’s Edge. (We’re assuming the Star Wars land will do timed entry, but there’s still likely to be a line.)

We never covered the opening of Grand Avenue, probably because I don’t really care one way or the other. It’s fine, but clearly is a placeholder. Literally. There area is expected to be a holding space for Star Wars: Galaxy’s Edge crowds and presumably a conceptual placeholder, too. I’d be shocked if BaseLine Tap House still exists in a decade.

What I do like is that this entrance to Star Wars: Galaxy’s Edge will provide a grand reveal with trees fully concealing the Batuu mountain range. 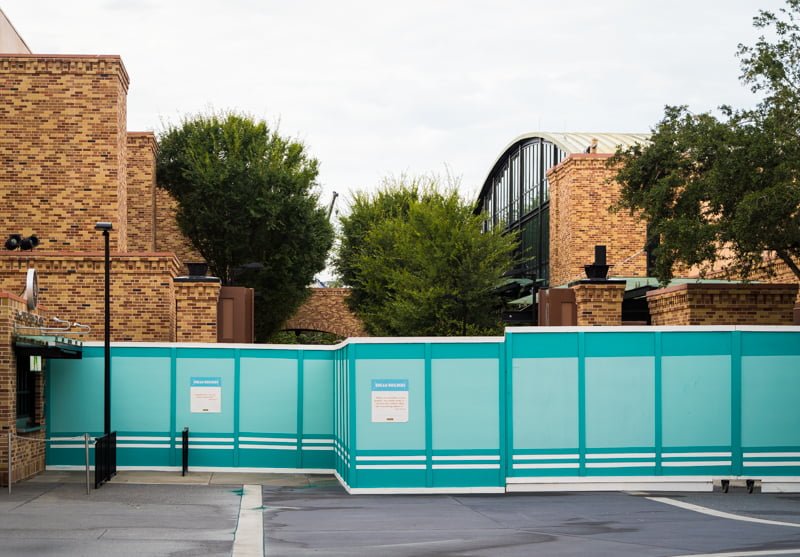 Construction walls were up during our visit at the old entrance to Pixar Place as a backstage gate was being installed. A day after this was taken, the walls came down to reveal the gate.

So, if you were hoping to get your photo with this trendy #DisneyWall, you’re out of luck. 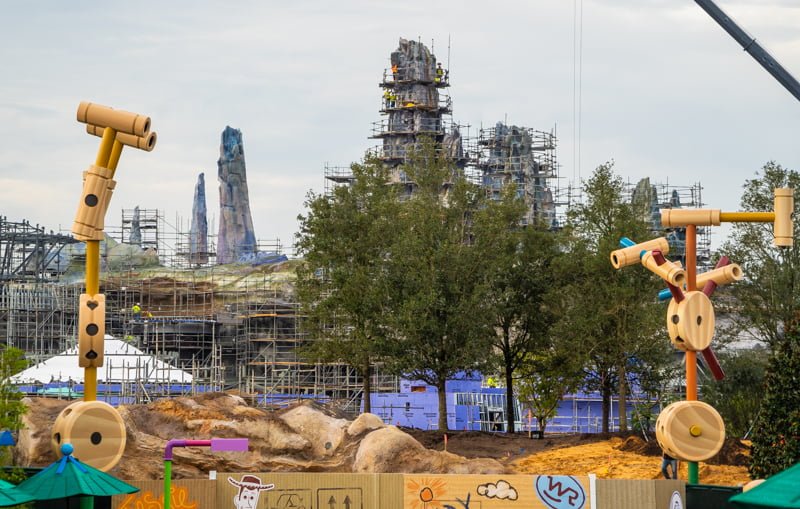 Toy Story Land is the best location in Disney’s Hollywood Studios for seeing the mountains of Batuu start to take shape and tower over the rest of the park.

I spent one entire morning ride on Slinky Dog Dash trying to get photos, with fairly mixed results. My apologies for the quality, but a moving roller coaster isn’t exactly the most forgiving situation for construction photography: 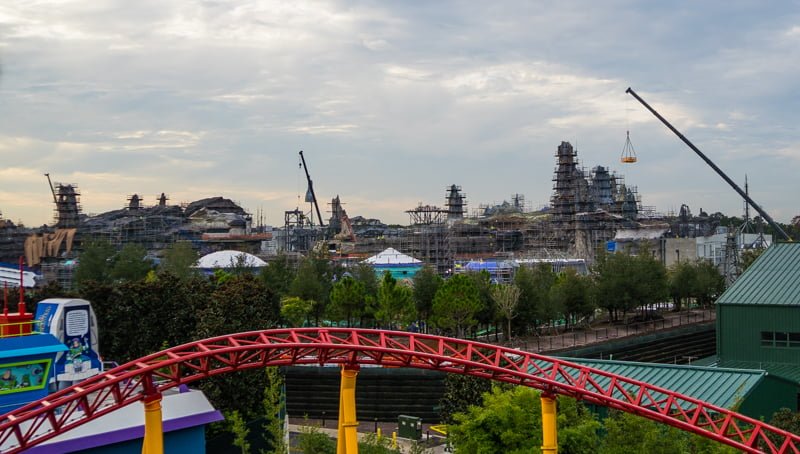 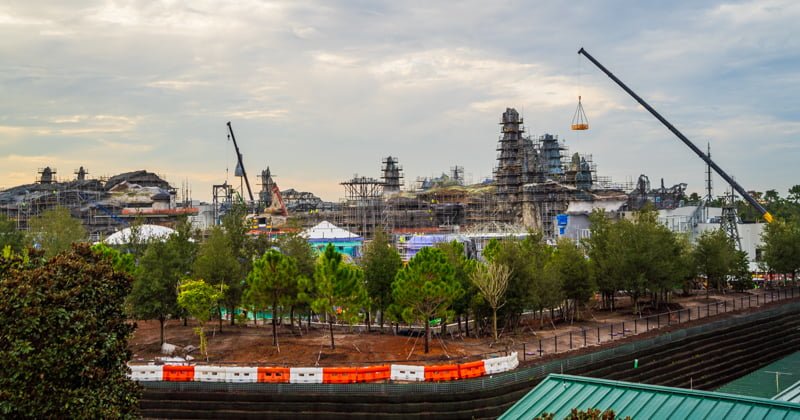 We hear from people who aren’t fans of Star Wars a decent amount who express emotions ranging from disinterest to disdain for Galaxy’s Edge. 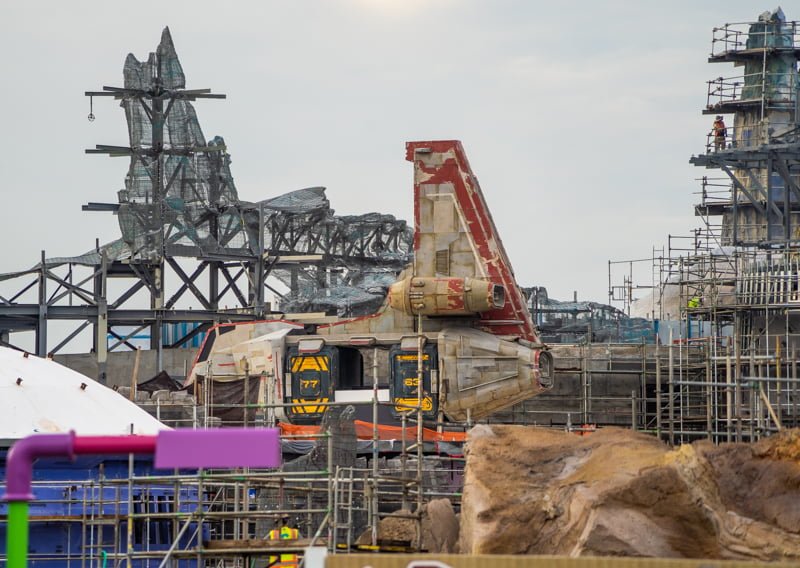 I’m not a fan of Avatar, Cars, or Harry Potter (among so many other IPs that feature in the parks), but I found those lands revolutionary. If what we’ve heard about Batuu thus far is true, it’s going to make those lands look like amateur hour.

Progress here still appears behind Disneyland, but not as far behind as it once did. Of course, work is now occurring within the show buildings, so it’s tough to tell where progress stands on one coast versus the other. 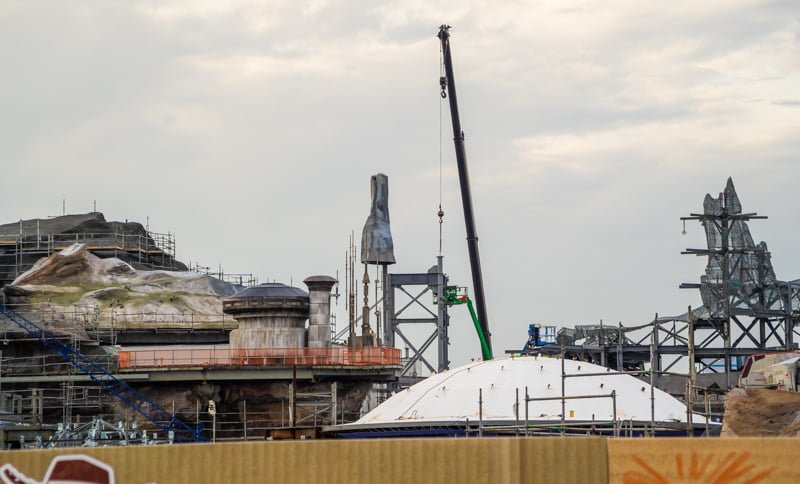 One pleasant surprise is that Toy Story Land was not nearly as busy as expected. While none of the parks were particularly busy during our off-season trip, we’ve noticed that waits for Slinky Dog Dash have died down a bit in general, something that still has not occurred with Pandora at Animal Kingdom.

We’d recommend Walt Disney World regulars avoid a full day and instead go first thing in the morning, following our Morning Extra Magic Hours at Disney’s Hollywood Studios Tips post or later in the afternoon and following our Half-Day Disney’s Hollywood Studios Itinerary. Doing that multiple days is a better approach than spending the entire day in the park, we think.

For now, that about covers it in terms of Disney’s Hollywood Studios updates. Obviously, there’s a lot on the horizon at this park. In the immediate future, Christmas is just around the corner and, it’ll be interesting to see how the first holiday season changes Toy Story Land. We’re also curious as to whether Sunset Boulevard and Echo Lake change at all, after debuting seasonal offerings last year that were something of a mixed bag. We’ll be back with another update on that, plus Star Wars land and other developments at Disney’s Hollywood Studios, so stay tuned!

What do you think of the Star Wars: Galaxy’s Edge construction progress? Excited to see recognizable details from the concept art and model take shape? Will you be visiting DHS in the next year, or are you waiting until Star Wars: Galaxy’s Edge is open? Any questions we can help you answer? Hearing feedback about your experiences is both interesting to us and helpful to other readers, so please share your thoughts below in the comments!