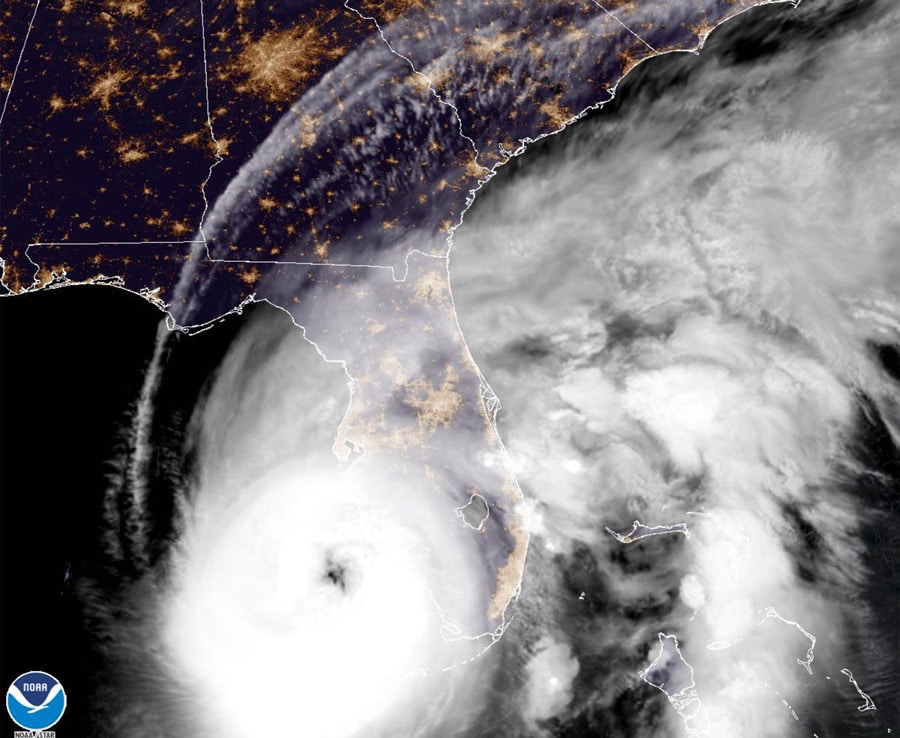 Prior to making landfall in Florida, Hurricane Ian has strengthened into an extremely dangerous category 4 storm, nearing category 5 status with maximum sustained winds of 155 mph. Walt Disney World is now under a hurricane warning, as the system is expected to approach Orlando tonight. In this, we’ll update you on the Ian’s status with advisories from the National Hurricane Center, with graphics from the NHC, NOAA, NWS, and more.

Walt Disney World and other Central Florida attractions have announced closures since our latest update. All 4 Theme Parks at Walt Disney World Will Close Due to Hurricane Ian, as will Universal Orlando, SeaWorld, Busch Gardens, LEGOLAND, and more. That was updated earlier this morning, and contains new information and details as of September 28.

The National Hurricane Center updates its Hurricane Ian Advisory every few hours, at which point it shifts the ‘cone of uncertainty’ representing the range of possibilities for the storm’s center that extends up to five days into the future. The cone of uncertainty predicts the hurricane’s path, but even outside of the cone, ferocious winds, storm surge, heavy rains, and other intense weather can be felt. Let’s start with the latest of these advisories, issued at 11 am by the NHC (plus accompanying new graphics): 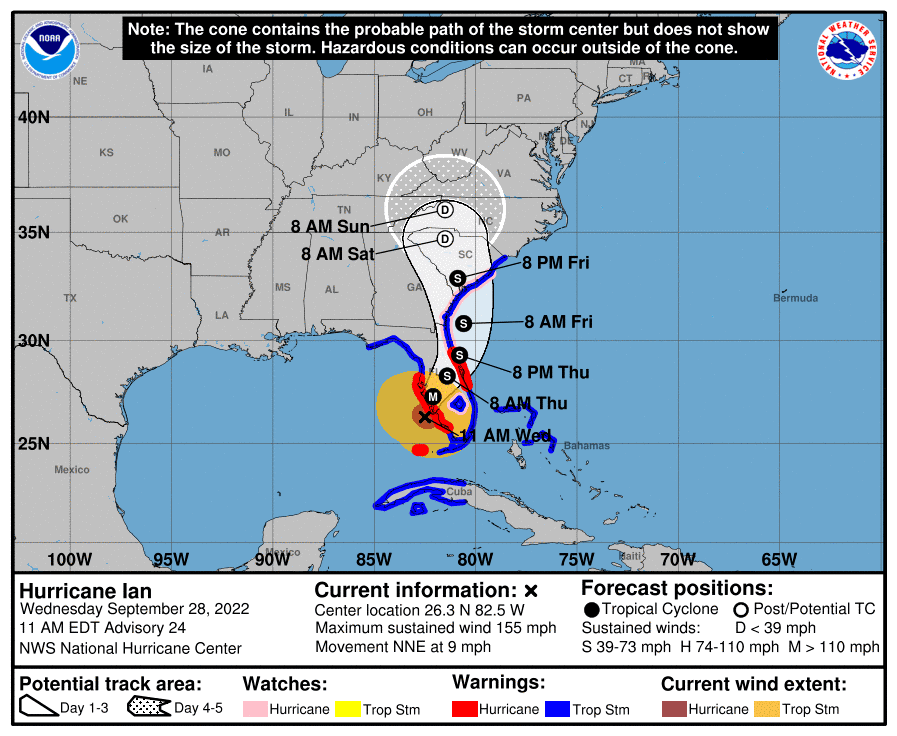 Data from an Air Force Reserve and NOAA Hurricane Hunter data was “absolutely critical” in diagnosing the rapid intensification of Hurricane Ian, despite both planes undergoing multiple eyewall penetrations experiencing severe turbulence. That data supported an intensity of about 135 kt a few hours ago.

Since that time, high-resolution Tampa Doppler radar data has been sampling the eyewall near 10,000 ft with winds up to 155 kt, indicating that Ian is on the threshold of Category 5 status. The maximum winds are set to 135 kt on this advisory. 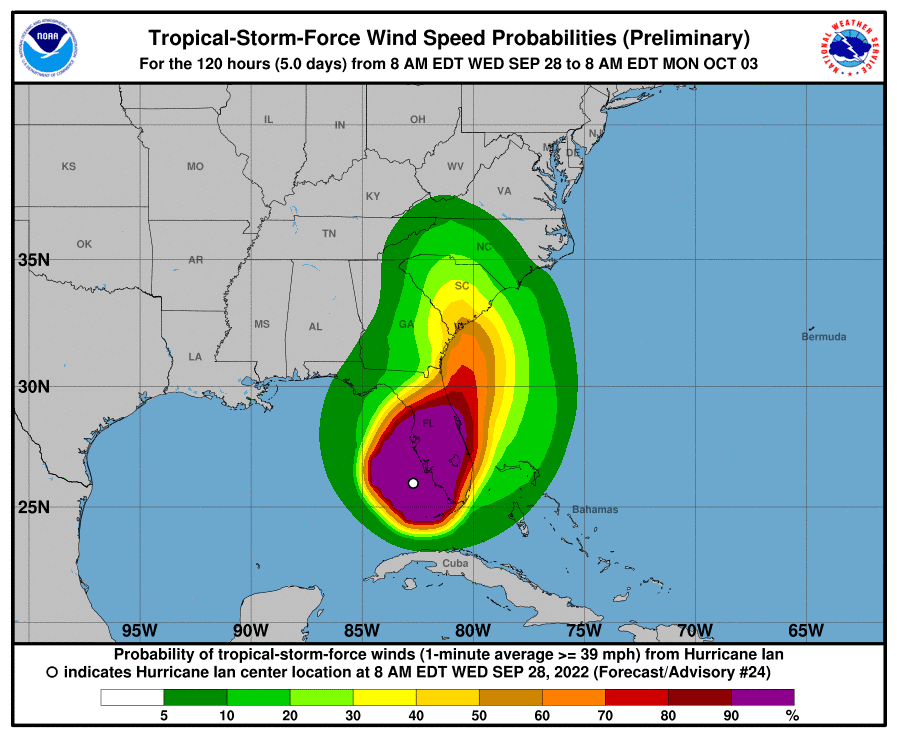 According to the 11 am NHC update, Hurricane Ian is expected to make landfall in southwestern Florida in the next few hours as a catastrophic hurricane. No changes were made to the track forecast near Florida, except to be faster to come into line with the latest consensus aids.

One important change is that Ian is likely to remain more intact as it crosses the Florida peninsula (due to both its stronger initial wind speed and its faster forecast forward speed), and this now increases the threat of hurricane-force winds on the east coast of Florida.

This necessitates the issuance of a Hurricane Warning on the east coast of central Florida. While significant re-strengthening of Ian might not occur over the Atlantic Ocean, model guidance has been catching up with a trough interaction from a shortwave over the southern United States, and are stronger than yesterday on Ian’s intensity.

Thus, a Hurricane Watch has been issued from northeastern Florida northward up the coast through most of coastal South Carolina. The new intensity forecast for Hurricane Ian is raised from the previous one. 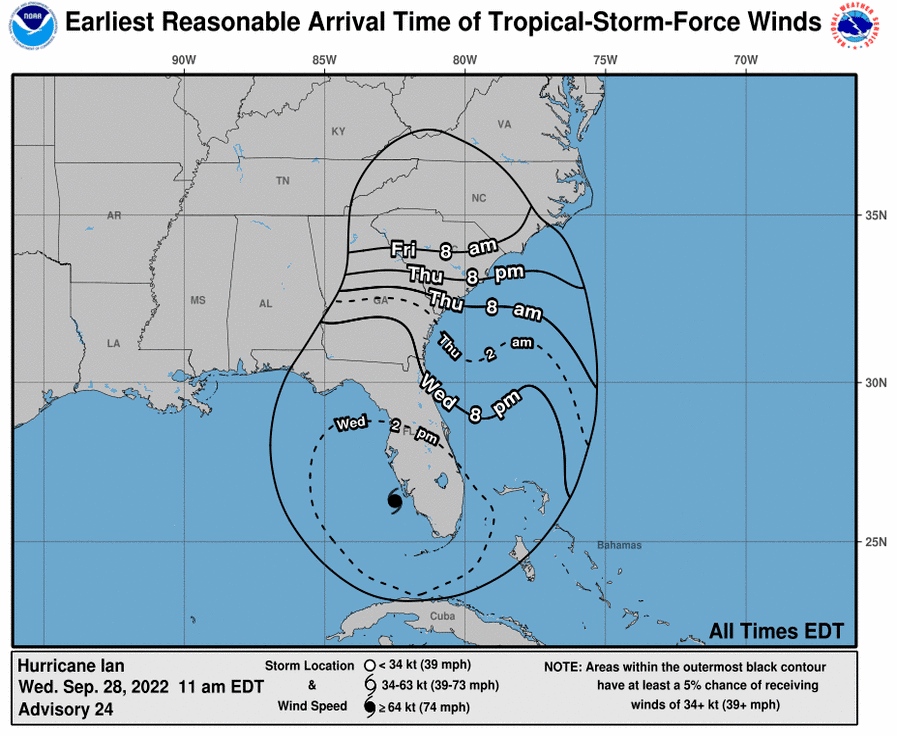 Per an earlier full update from the National Hurricane Center on September 28, fluctuations in intensity are possible before the center reaches the coast later today, but Hurricane Ian is expected to reach the coast of Florida as an “extremely dangerous” category 4 hurricane according to the NHC. However, weakening is expected as Ian moves over the Florida peninsula.

Ian has shifted a little to the left this morning, but the longer-term motion remains north-northeastward, as the system continues on a path that is expected to take it just south of Walt Disney World property.

The hurricane should continue moving north-northeastward through Thursday between the western side of a subtropical ridge and a broad trough over the eastern United States. This motion is expected to bring the center of Ian onshore along the west coast of Florida later today, and over central Florida tonight and Thursday.

After that, Ian is expected to turn northward along coast of northeastern Florida and Georgia Thursday night and Friday.

According to the National Hurricane Center, here are the Key Messages for Florida (all direct quotes):

1. Catastrophic storm surge inundation of 12 to 18 feet above ground level along with destructive waves are expected somewhere along the southwest Florida coastline from Englewood to Bonita Beach, including Charlotte Harbor. Residents in these areas should urgently follow any evacuation orders in effect.

2. Catastrophic wind damage is beginning along the southwestern coast of Florida today near the landfall location. Hurricane-force winds are expected to extend well inland along near the core of Ian. Preparations to protect life and property should be urgently rushed to completion.

3. Heavy rainfall will spread across the Florida peninsula through Thursday and reach portions of the Southeast U.S. later this week and this weekend. Widespread, life-threatening catastrophic flooding is expected across portions of central Florida with considerable flooding in southern Florida, northern Florida, southeastern Georgia and coastal South Carolina. Widespread, prolonged major and record river flooding is expected across central Florida. 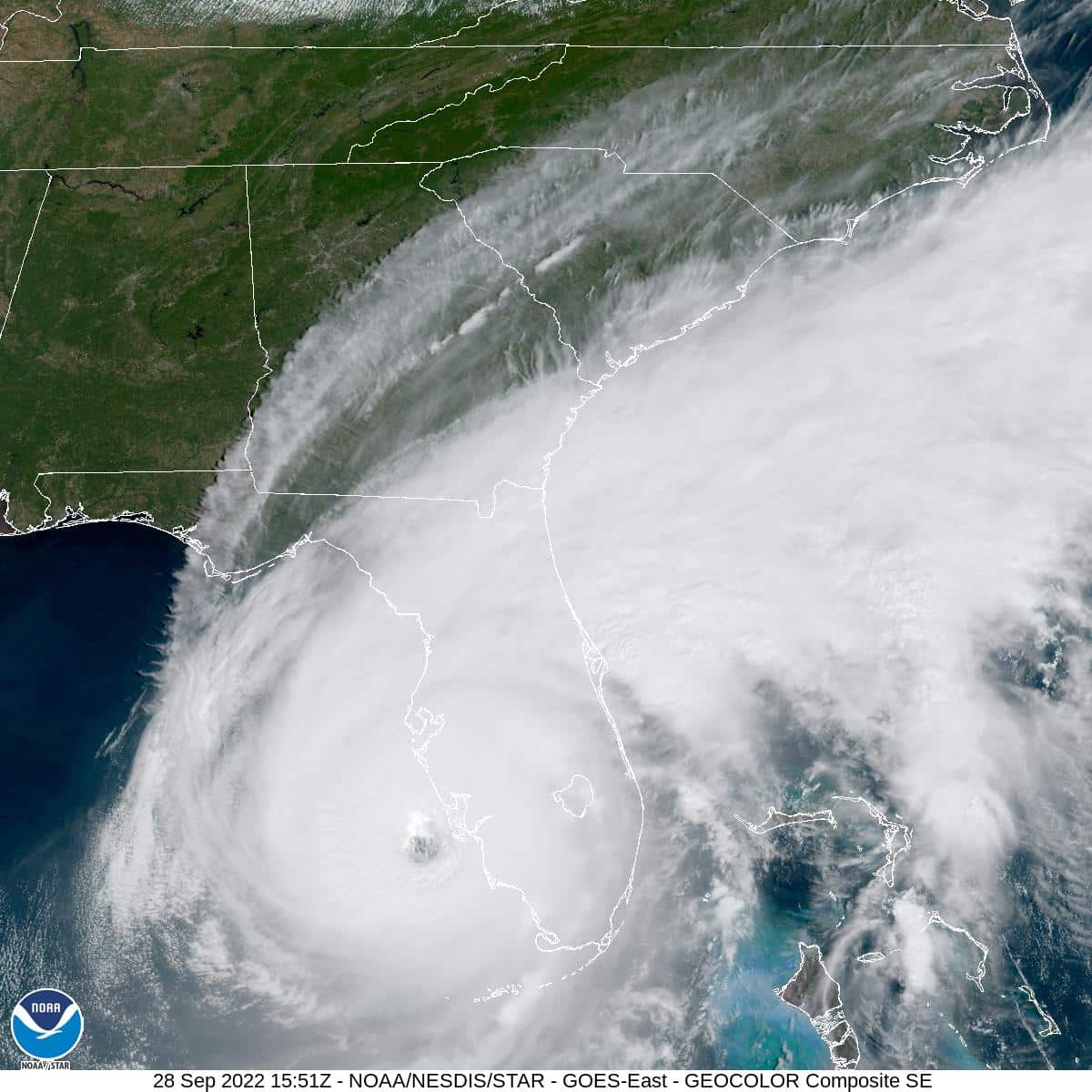 The aforementioned Hurricane Warning includes Orange, Osceola, and other inland Central Florida counties. These remain under Hurricane Warnings as Ian could result in catastrophic flooding and hurricane-force gusts to the region.

Central Florida is now also under a tornado watch, as the outer bands of Hurricane Ian have produced several damaging twisters. Consequently, multiple tornado warnings have been issued according to the National Weather Service–these include Osceola and Orange Counties, among many others.

Florida Governor Ron DeSantis held an early morning press conference on Wednesday from the state Emergency Operations Center in Tallahassee during which he addressed the strengthening and arrival of Hurricane Ian. “The strengthening of this over the last night has been really, really significant,” DeSantis said. “It could make landfall as a Category 5.”

“This is a very powerful major hurricane that’s going to have major impacts, both on southwest Florida, but then as it continues to work through the state,” DeSantis continued. Hurricane Ian will have “major, major impacts in terms of wind, rain, [and] flooding. This is going to be a nasty, nasty…two days.”

“It’s time to hunker down and prepare for the storm. This is a powerful storm that should be treated like you would treat it if a tornado was approaching your home,” DeSantis said. He also indicated that there are hundreds of shelters open for those who need somewhere safe to stay during Hurricane Ian.

“There’s already 40,000 power outages reported, but outside of southwest Florida, crews have been responding to those power outages,” DeSantis said. Previously, he has said that “tens of thousands” of people are on standby to ensure power is restored as promptly as possible and that all of the state’s long-term care facilities in the state have an active generator on site with the threat of major power outages this week. 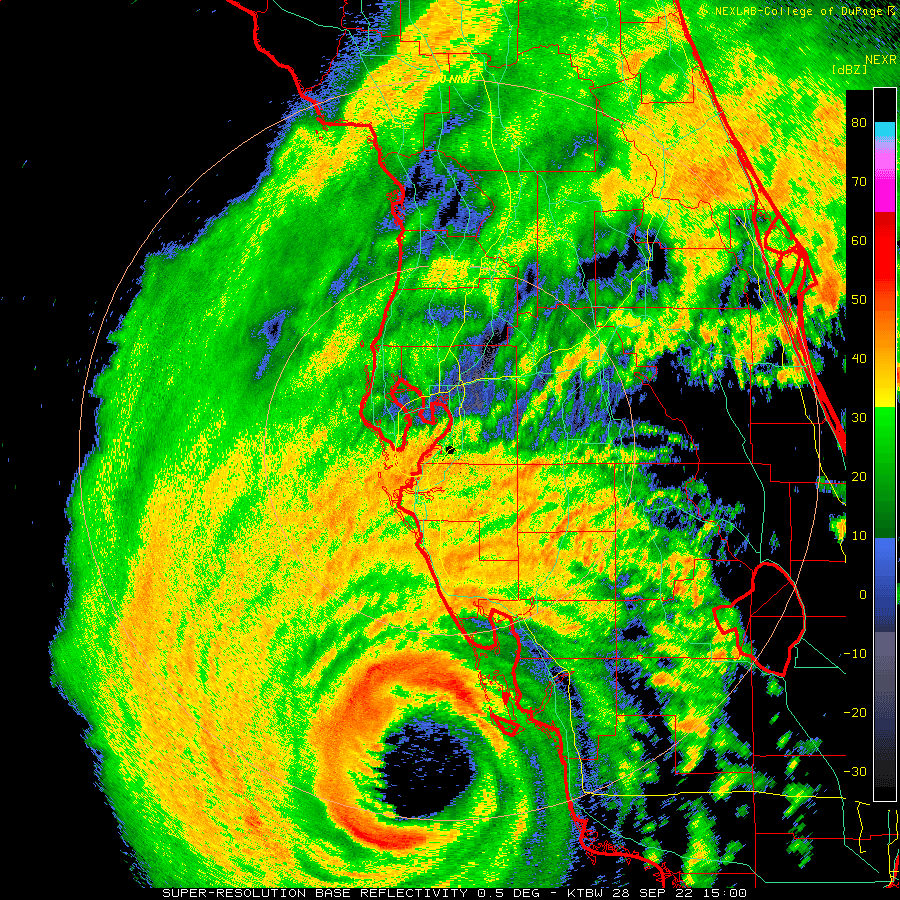 Over 5,000 National Guardsmen from Florida plus several thousand more from neighboring states have been activated, along with search and rescue teams. Residents are advised to avoid trying to drive down flooded roads after Hurricane Ian passes.

“If there are flash flood warnings, remember it is never safe to drive through flooded areas,” said Kevin Guthrie, Director of the Florida Division of Emergency Management. Guthrie added that emergency managers in Florida are preparing for Hurricane Ian to strengthen to a Category 5 system.

Guthrie also addressed comparisons to Charley, which were drawn for a second consecutive day during the Emergency Operations Center news briefing. “It does have a Charley-esque feel. One of the things that’s a little different with Charley is [Hurricane Ian] may go through Central Florida with less intensity than Charley.”

“The big difference is it will have less intensity once it hits Central Florida,” Guthrie said. Hurricane Ian “shouldn’t be nearly as catastrophic as the winds on Charley,” Guthrie added. The National Weather Service in Melbourne is forecasting hurricane-force winds gusts of up to 90 mph in Orlando by early Thursday.

Hurricane Ian’s projected path is strikingly similar to that of Charley, which hit Florida as a major Category 4 hurricane and arrived in Central Florida as a Category 1 system with sustained winds of 80 mph and wind gusts up to 110 mph. While Hurricane Ian is not forecast to be quite that intense upon arrival in the Walt Disney World area, it doesn’t need to be to cause considerable damage. Its larger size and current conditions–due to prior precipitation–could result in extensive damage and power outages throughout the Orlando area. 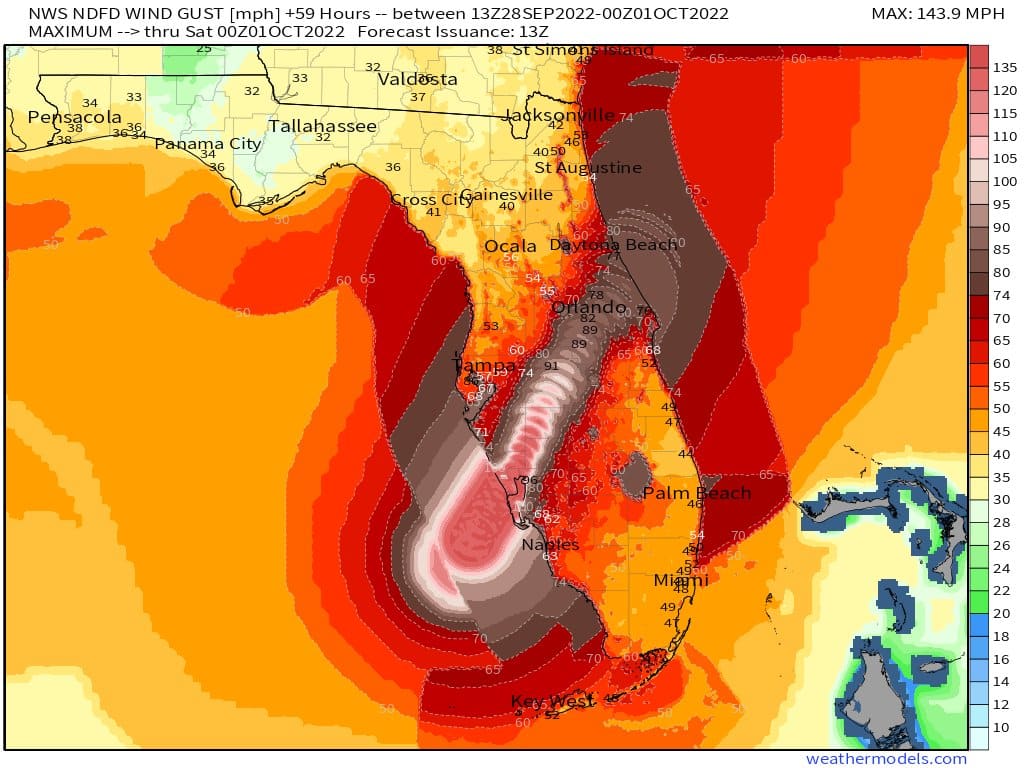 If you are anywhere in Central Florida, stay safe. If you’re at Walt Disney World, remember to be kind and extend some grace to Cast Members and other guests. Many people staying at the resorts are seeking shelter from coastal areas where Hurricane Ian is making landfall, and are likely on edge about their homes, friends and family.

Some Cast Members are Florida transplants and, given the amount of time that has passed since the last major system, this is probably the first major hurricane they’re experiencing since moving to Florida. Many of those Cast Members are also College Program or International Program participants, living alone away from home for the first time in their lives. I cannot imagine how terrifying this is for them and their families. In short, everyone is doing the best they can, which is worth keeping in mind when interacting with others–courtesy and kindness go a long way. Here’s hoping this passes quickly and with minimal damage and harm, and Walt Disney World can resume normal operations on September 30, 2022. We’ll keep you posted either way!

Thoughts on the latest National Hurricane Center forecast for Hurricane Ian showing the storm near Category 5 status? Concerned about the consensus showing the system moving directly through Walt Disney World? Are you currently in Central Florida? Have you visited during past hurricanes? Any additional info, thoughts, or first-hand experiences to share about riding out a hurricane at Walt Disney World? Any questions we can help you answer? Hearing your feedback–even when you disagree with us–is both interesting to us and helpful to other readers, so please share your thoughts below in the comments!