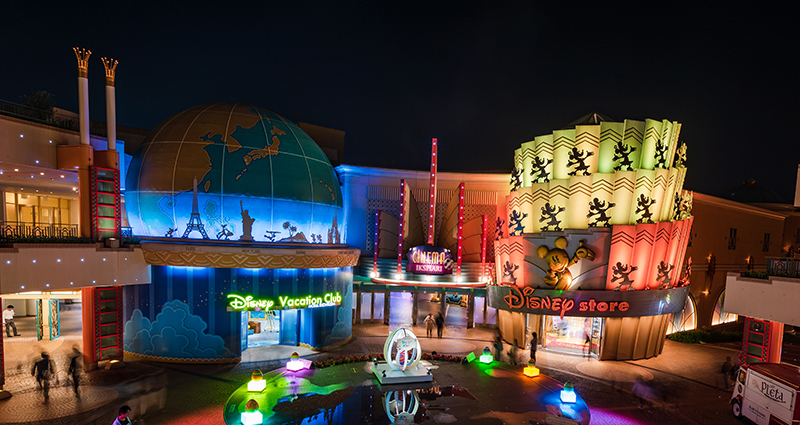 Ikspiari is a dining, shopping, and entertainment complex located within walking distance of Tokyo Disneyland, the JR Maihama railway station, and with its own monorail station. It’s Japan’s take on the Downtown Disney concept, and in this guide we’ll cover some basics tips for visiting Ikspiari, along with restaurants and stores we recommend.

With that said, this is not a comprehensive guide to all things Ikspiari. With roughly 150 restaurants and retail shops, that would be an exercise in futility. Moreover, most of these stores are not relevant to our interests and have very little to do with Disney. Speaking of which, while we referred to Ikspiari as Tokyo Disney Resort’s twist on Downtown Disney, it is decidedly not Disney.

As a reminder, Tokyo Disney Resort is owned and operated by Oriental Land Company (OLC) and not the Walt Disney Company. While we’re not privy to the whole backstory, it’s likely that OLC purposefully developed Ikspiari without Disney branding to avoid paying licensing fees. This isn’t to say Ikspiari is not nicely designed or inviting. To the contrary, it bears plenty of similarities to Downtown Disney at Disneyland Resort or Disney Springs at Walt Disney World…

The question is whether that’s enough to justify spending any significant amount of time at Ikspiari while you’re visiting Tokyo Disney Resort. Our view is that Ikspiari is fine for quick stops for specific purposes, such as dinner on arrival night, grabbing groceries for in-room breakfast, or searching for media not sold in the park.

With that said, we would strongly recommend that you do not build free time at Ikspiari into your itinerary for Japan. What we mean by this is that you should not plan to explore Ikspiari for a half-day or even a few hours. It’s not like Disney Springs in that regard. 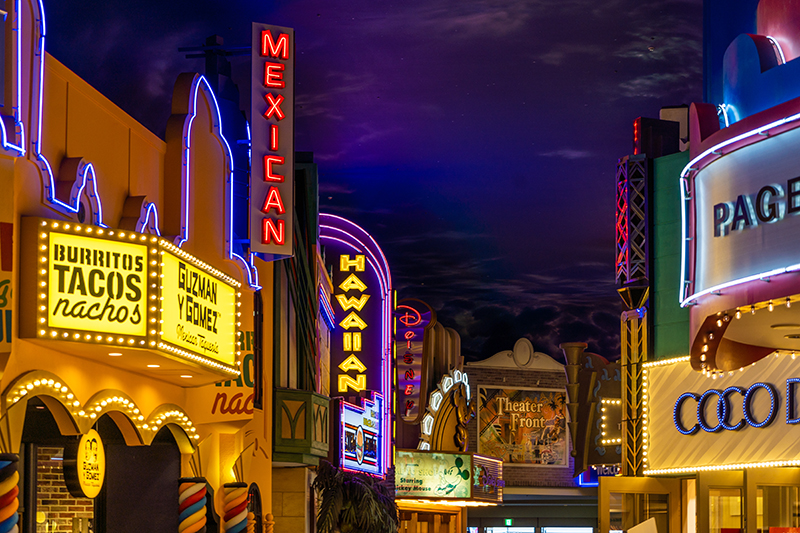 For those who are big into shopping and want to do some of that in Japan, we’d encourage you to do so in Tokyo proper. There’s no shortage of superlative shopping in Tokyo, with literally every major train station having an above or underground labyrinth of retail and dining.

If you want the easiest of these options, we’d recommend a half-day in Odaiba, which is on an artificial island across Tokyo Bay and about 30 minutes from Tokyo Disney Resort. Then there’s the bright neon of Akihabara’s electronics and otaku culture, the chic storefronts of Ginza and Roppongi Hills, and the unique items of Asakusa and Harajuku. 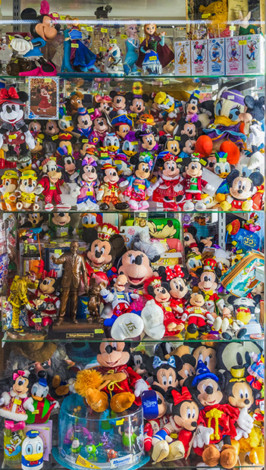 However, none of these places will be as compelling for Disney fans as Nakano Broadway. It’s hard to describe what, exactly, this is–but it’s like a scrappier version of Akihabara. Most of the shops here are second-hand stores that cater to collectors and geeks, and it’s an eclectic mix of stuff for everyone.

Several of the stores have Disney items, and we frequently buy great Tokyo Disney Resort collectibles here. We absolutely love Nakano Broadway, and make a point of spending a few hours there on each trip to Japan. For more info & tips, see our Shopping Guide to Nakano Broadway on our non-Disney blog, TravelCaffeine.com. 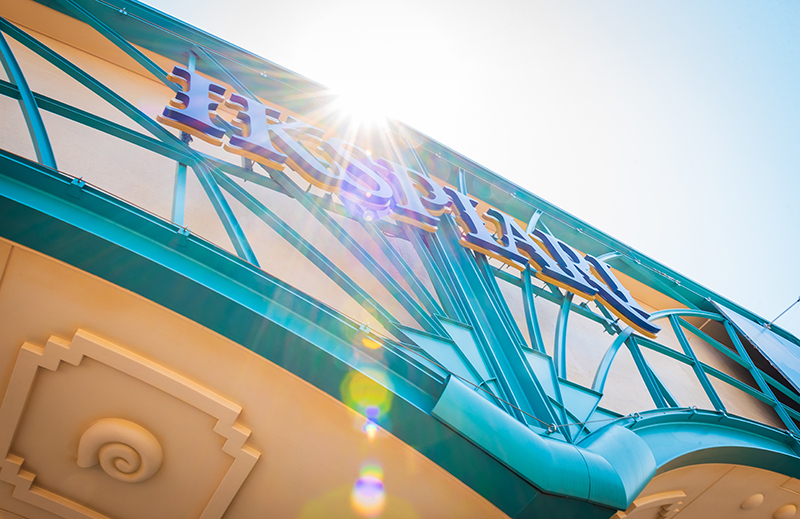 Back to Ikspiari. The first thing you need to know is that Ikspiari is sprawling, laid out in a confusing manner, and you will get lost your first or (in our case) fiftieth time visiting. Just accept that now, as it’s going to happen. Stop worrying and succumb to your fate.

Even following this interactive online map or directional signage within the Ikspiari complex, getting lost is pretty much unavoidable. The layout makes no intuitive sense, not every stairway or corridor connects, and the whole place was designed by monkeys drunk on sake (probably). Just think of Ikspiari as an open world (and free!) escape room. Who says there’s nothing adventurous about doing Disney?! 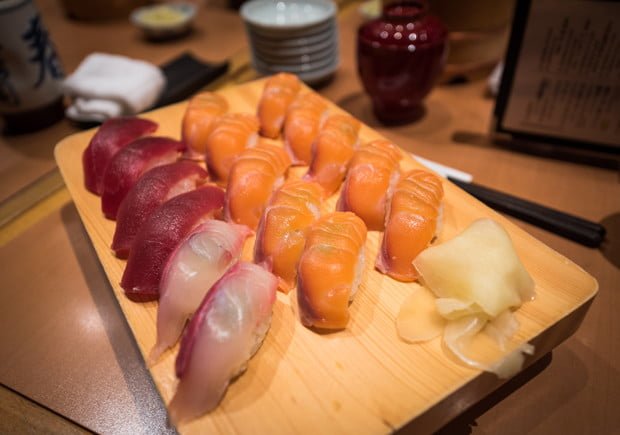 A couple of the easier, front-and-center places to find are among our recommended stops.

The first of these is Tsukiji Tamasushi, which serves authentic sushi at a reasonable price using fresh ingredients shipped directly from the Toyosu and Tsukiji Fish Markets. We’re big fans of their fatty tuna or salmon nigiri sushi. 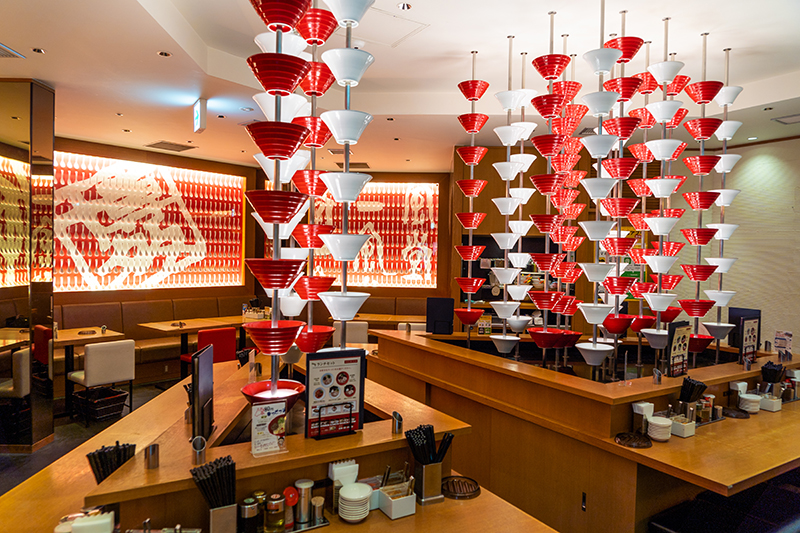 Second, Ippudo. This is a famous ramen chain (that now has a few locations in the United States). Yes, it’s a chain but it has some of the best ramen you’ll find in Japan. Ippudo has a location in Ikspiari on the third floor.

Be warned that you’ll often find long lines here on weekends and around meal time. We usually do Ippudo first thing in the morning or late at night. (They open at 11 am and close at 11 pm.) 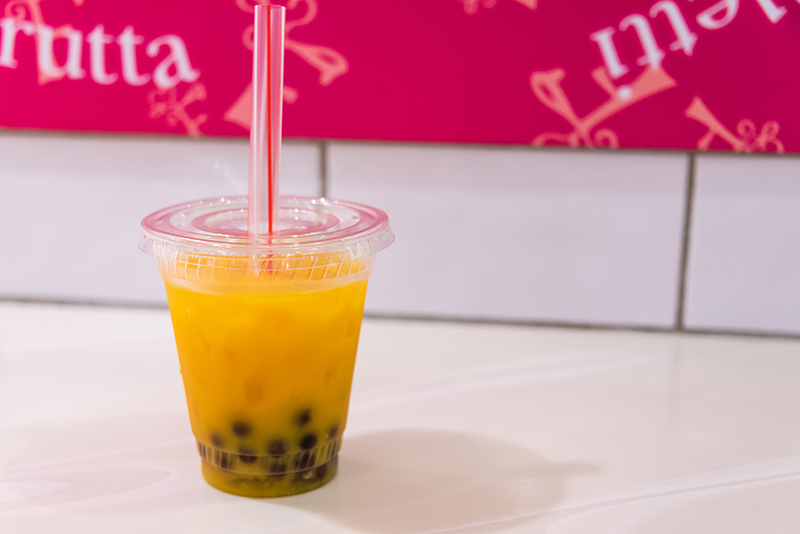 Other solid options include Tonkatsu Wako, which serves fried pork cutlets; Mai Chibo, which is a great and fun way to try okonomiyaki; and, Rin-Ya, which serves soba noodles, tempura, and other traditional Japanese dishes.

This is just a small sampling of the restaurants at Ikspiari–we haven’t tried the vast majority of them, preferring to eat most meals in the parks or the city. 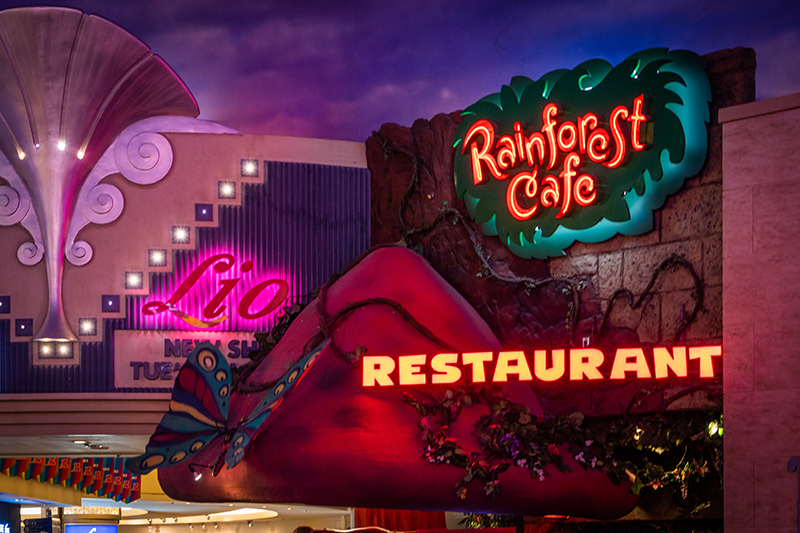 For those picky eaters who want some boring American chains, there are a variety of options including T.G.I. Friday’s, Red Lobster, Outback Steakhouse, and Rainforest Cafe.

We’d implore you not to dine at any of these. Japanese food is incredibly mild and not even remotely adventurous in the typical sense of the word–at least give ramen, tonkatsu, and tempura a try. They’re all crowd pleasers. 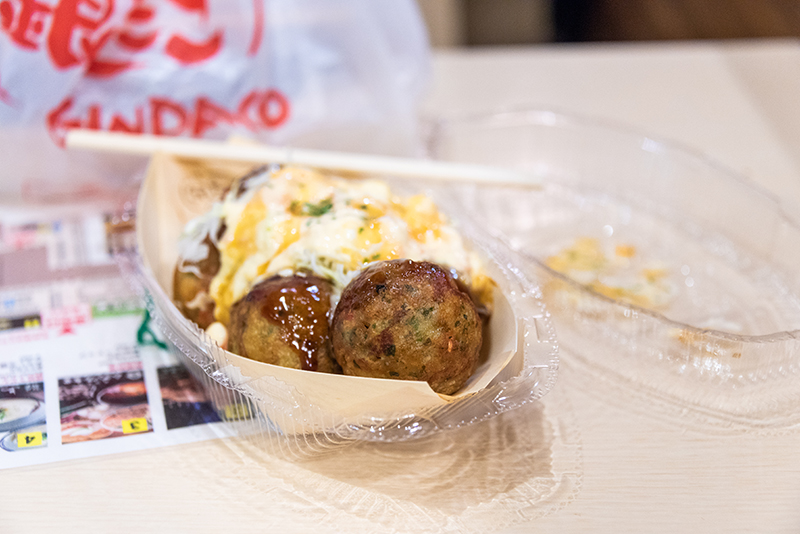 On the first floor you’ll find a food court called “Ikspiari Kitchen.” This is basically the fast food area of Ikspiari, and it’s very hit or miss.

We’ve had some awful meals here (avoid all of the noodles spots and westernized locales) as well as some good ones. Our biggest recommendation would be to not put all of your eggs in one basket–order a sampling of items from a variety of the vendors. 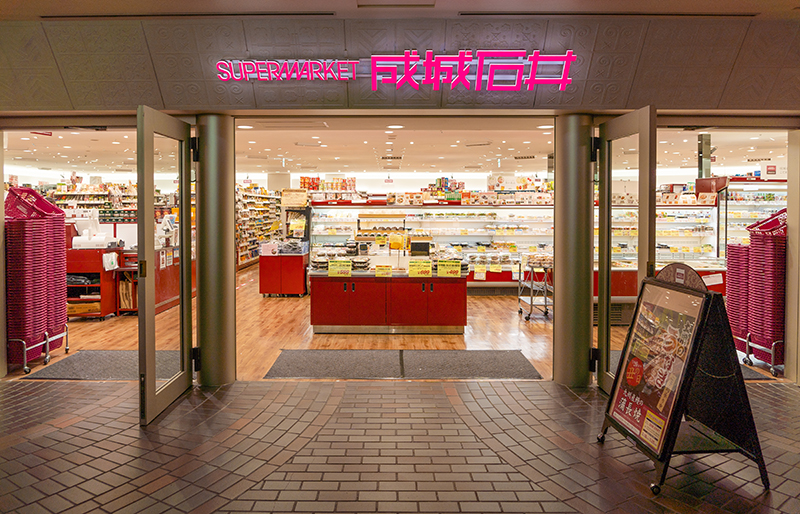 On the first floor across from Ikspiari Kitchen, you’ll also find Seijo Ishii, which is a moderately-sized supermarket with a variety of items. It’s a tad overpriced, but still cheaper than the parks. We typically stock up on bananas plus other fruits and vegetables, as those can be difficult to get in the parks without doing a buffet.

At Seijo Ishii, you’ll also find the bizarre seasonal or Japan-exclusive flavors of Coke and Pepsi, plus pizza potato chips. We always stock up on all of these things–no joke!

Behind Seijo Ishii there’s a pathway with storage lockers and restrooms. More importantly, there’s a 7-11 ATM where you can use your American debit card to withdraw Japanese Yen. (There are no such ATMs in the parks, but a couple at the monorail loop hotels.) 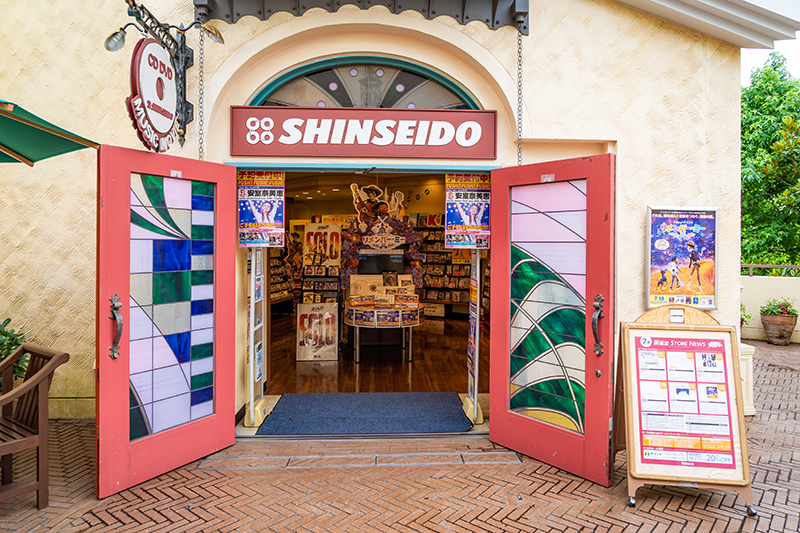 Around the corner on the first floor is the Medi+Plus pharmacy, which hopefully you won’t need. Across from that is Maruzen, which is described as a “shop has various books, both Japanese and foreign, that were selected for fashionable women.” You might be able to find some Tokyo Disney Resort photo books there.

Better for Tokyo Disney Resort media shopping is Shinseido, which is located on the second floor. If you want Tokyo Disney Resort CDs, DVDs, or Blu-ray videos, this is definitely the place to go. Their selection is far superior to the in-park stores, as they have many out-of-print titles. 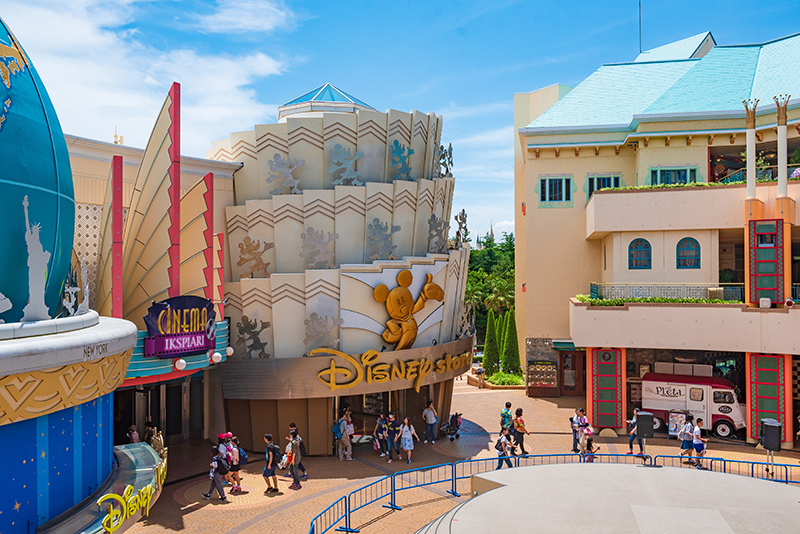 The large Disney Store on the second floor is going to be a big draw of Ikspiari, and it’s worth noting that this sells different items than what you’ll find in the parks. This is Disney Store stuff made for the Japan audience.

For Tokyo Disney Resort shopping outside the park, visit the large Bon Voyage store between Ikspiari and Tokyo Disneyland. Although there’s a Disney Vacation Club storefront in a couple of these photos, that no longer exists. 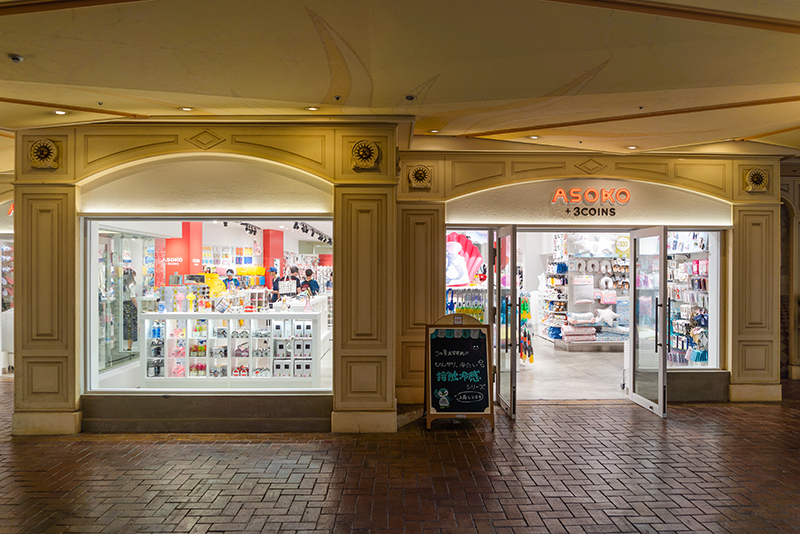 Other than that, you’ll find a bunch of familiar stores like Gap, Guess, and Lacoste, plus a ton of unfamiliar ones. Unfortunately, there’s no UNIQLO…yet.

The only other store we’d recommend checking out is ASOKO & 3COINS, which is a 300-yen store. (If you’re heading into the city of Tokyo, be sure to look for Daiso and Seria, which are the best 100 yen stores.) 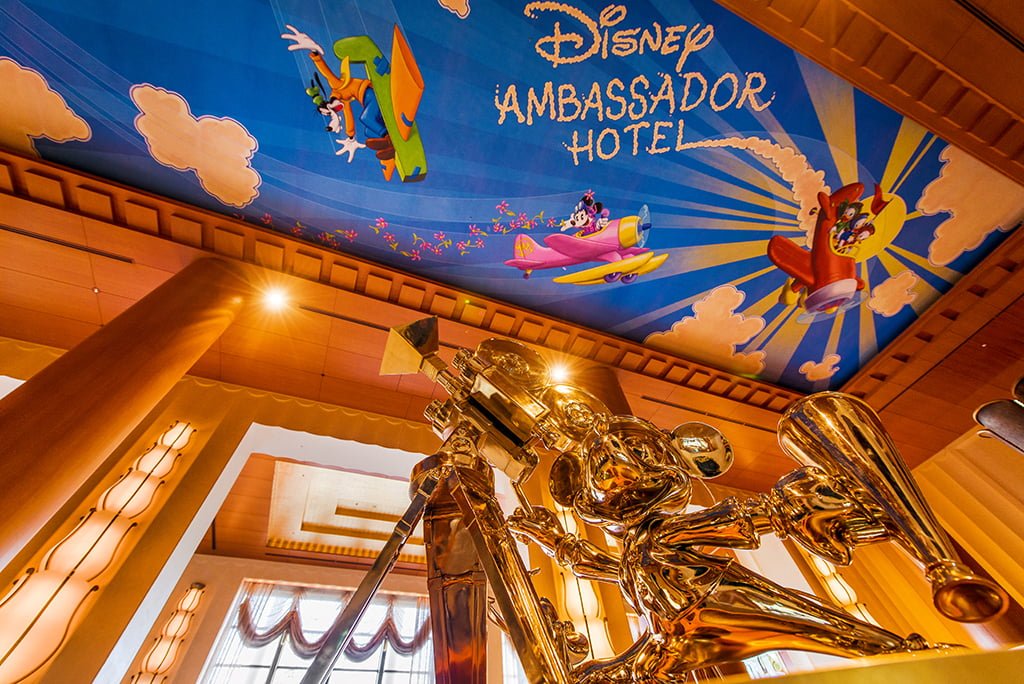 We’d also recommend continuing on past Ikspiari and visiting Disney’s Ambassador Hotel if you’re in the area. Tick Tock Diner always has some delicious and cute baked items.

Overall, Ikspiari is a serviceable option for an arrival or departure day meal, to stock up on stuff for your hotel room fridge, or to buy select souvenirs that are not sold inside Tokyo Disneyland or Tokyo DisneySea. However, that’s about it. Ikspiari is not a place where you should aimlessly wander (although you’ll do that when you invariably get lost!) or plan to allocate valuable vacation time in Japan.

Have you visited the Ikspiari shopping & dining complex at Tokyo Disney Resort? Do you agree or disagree with our assessment? Think it’s worth setting some time aside to explore Ikspiari? Have any favorite restaurants or stores here? Any questions? Hearing your feedback–even when you disagree with us–is both interesting to us and helpful to other readers, so please share your thoughts below in the comments!

7 Responses to “Guide to Ikspiari at Tokyo Disney Resort”