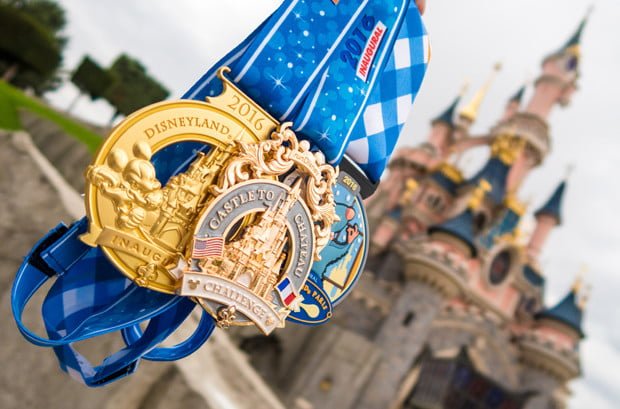 Okay, time for a recap and final thoughts. For that, I think it makes sense to return to the predictions of my Disneyland Paris Half Marathon Preview and see what I got right and wrong. At that point, I had admittedly high expectations, with my 3 main predictions/hopes being the following:

As for the first prediction, there’s really no way of proving or disproving this, so I’m just going to go ahead and say I was correct. There were a ton of English-speakers at Disneyland Paris that weekend. Perhaps there were more for the opening of the park when Disneyland and Walt Disney World Cast Members would’ve been present to help launch the park, but back then, the park was called Euro Disneyland. My prediction was the most-ever at Disneyland Paris, so…I’m still technically correct. 😉

On the second prediction, no amount of parsing words makes me correct. Thankfully. This was one of–if not the–best organized runDisney events I’ve ever done. This is really saying something, because I feel like runDisney events are always pretty well-managed on the day of. I suspect the volunteer-to-participant ratio was better here than at the US events, and being able to juggle a mix of English and French-speaking guests is an impressive feat.

Finally, my expectation of well done courses with a lot of entertainment and rare characters was more or less accurate. The 5K course was great and the Half Marathon was very good, and there were more rare characters out than at a normal runDisney event.

Even with that, I think I might have been a victim of my own expectations, as I anticipated even more rare characters, and quite a bit more third party entertainment outside of the parks. 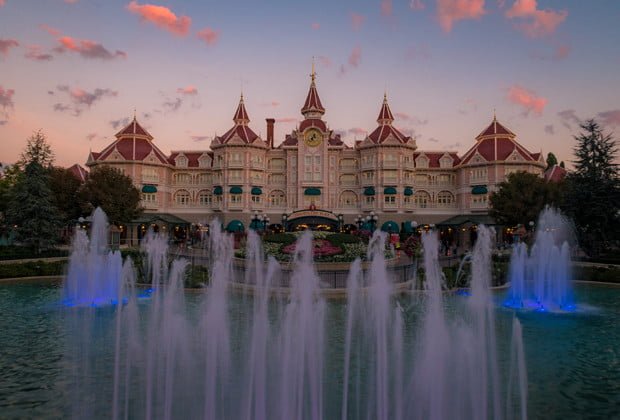 Breaking things down, about half of the course (the first quarter and last quarter) was on Disneyland Paris property, with the other half (the middle) being through Val d’Europe. I found this to be an acceptable breakdown, although I expected more of the race to be on-property. Perhaps I over-estimated just how large Disneyland Paris is? Part of me was hoping we’d run through Golf Disneyland or out to Disney’s Davy Crockett Ranch. It’s possible neither option was logistically feasible, though.

While the stretches of the course that winded through the resort area and parks were phenomenal, the Val d’Europe stretch left a bit to be desired. It was pleasant thanks to the weather, serene scenery, and flat terrain, but I think it would get pretty old doing that stretch a second time. I realize Disney is constrained with the entertainment in areas it doesn’t control, but this stretch of the course could’ve been so much more enjoyable if they added a few more entertainment acts. All things considered, it was still a very good course. 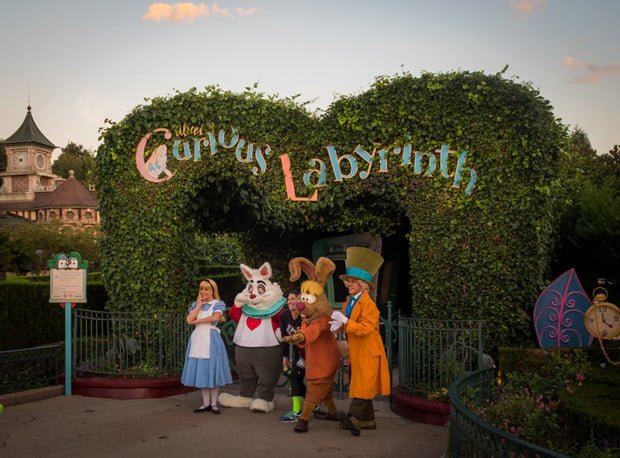 On the rare character front, this was partly just poor luck and bad timing on my part. After both mornings, I looked on social media to see a deluge of characters in front of backdrops that had been “empty” when I passed. I don’t know if this was just really poor timing, or if some of the characters weren’t out that early (I was at the front of the pack both mornings).

Even what I saw would have qualified as well above average by recent runDisney standards, but I was expecting Disneyland Paris’ excellent entertainment team to pull out all of the stops to generate strong word of mouth for future events. 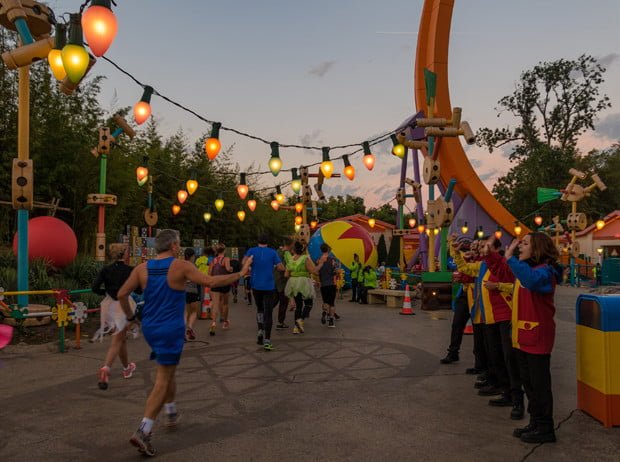 Where my expectations were not exceeded by on-course entertainment, they were blown away by Cast Members. On this blog, I’ve been pretty dismissive of American complaints about Parisian Cast Members as a matter of culture, and I tend to be fine with normal French attitudes towards guest service.

Consequently, I was shocked and blown away by the very high level of service in the parks throughout the weekend, and the genuine enthusiasm on display by Cast Members during both races. These races had an unexpected X factor, and it wasn’t characters, running through the French countryside, or anything anyone might’ve predicted. It was the French Cast Members. 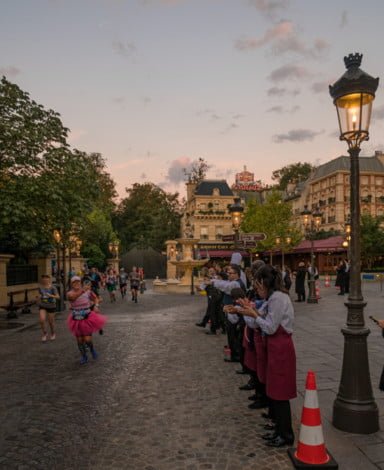 If you weren’t there, you might read this and think they received a memo to “be excited.” This was not a matter of feigned enthusiasm while half-heartedly cheering on runners. In every instance I witnessed, the Cast Members seemed genuinely happy to be there, cheering on runners.

The Cast Members were playful, boisterous, and downright fun. Their energy was contagious, and that is not hyperbole. I felt like whenever I passed Cast Members shouting “allez allez allez!” (“go go go!”) it gave me a motivational spike.

Maybe they realized they were de facto ambassadors of France for a mixed audience, and they were taking pride in this role? Whatever the reason, their exuberance was very much appreciated. These Cast Members added a ton to the experience, and I think they were the real MVPs of the race weekend. 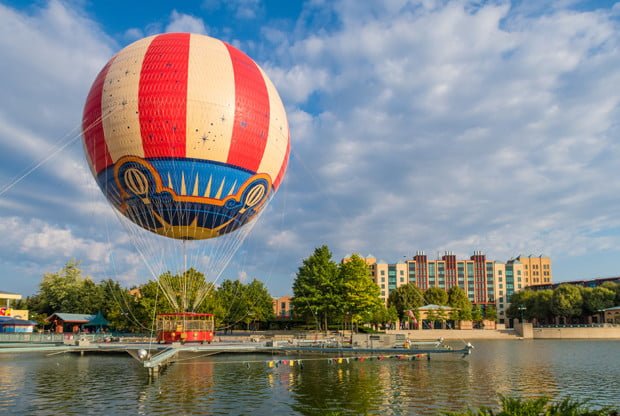 After the race, we rushed back to our hotel to shower, pack up, and check out before our time was up at the Hipark Serris. We accomplished this in short order, and then decided to make a quick detour into the park for photos with our medals. As it turned out, this was one of the biggest mistakes of the trip.

It was interesting to park in the lot and walk in through a different entrance, but “interesting” doesn’t always mean good. The parking area epitomized the 1990s and between the dated look and that nearly every single moving sidewalk was broken, it was a reminder of the bleak years of Disneyland Paris. (In fairness, I suppose a lot of the same criticism could be levied at Walt Disney World’s TTC.) 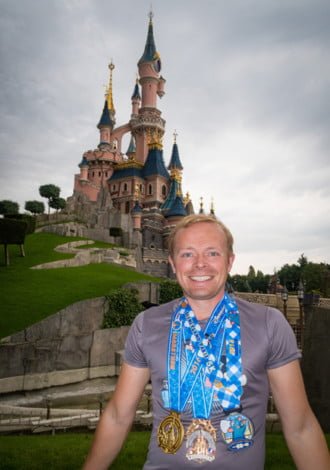 Suffice to say, it took longer than expected getting into the park. Once there, I headed to Le ChÃ¢teau de la Belle au Bois Dormant for some photos while Sarah headed to a shop that was closed the night before to inquire as to whether they had the McDuck hat. They did…and that’s the resolution of that “exciting” story. 😉

No sooner than the glorious McDuck hat arrived and it started raining. Not just a light sprinkle–it was pouring. It was as if we had mortgaged the beautiful weather for that hat, which I guess is a fitting trade for something Scrooge-related, but it seems a little unfair for all of the other innocent guests in the park. Even after the miserable experience of getting soaked, I’d make that deal again in a second–you never know when a fine Scrooge McDuck hat like this might come in handy!

Gah! Me medal loot from #DisneylandParisHalf!

In our infinite wisdom, we decided to prolong exposure to the terrible weather by grabbing lunch at Earl of Sandwich. I’m not sure why we decided to do this, but it was an unequivocally awful idea. Not only did it mean a longer walk through the rain, but the restaurant (and everywhere in Disney Village) was absolutely packed with post-race crowds.

On the plus side, while Sarah stood in what ended up being a 30+ minute line to order, I ran to the race Expo tent. I had realized my race shirt (which I was wearing) was too small, and wanted to see if there was any way I could exchange it or purchase another. 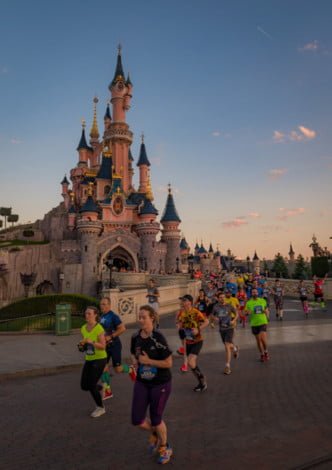 This experience once again underscored the great guest service that weekend. Initially, there was no one at the counter where shirts were distributed (the race was over, why would there be?). However, a couple of helpful volunteers were able to track someone down, who then went in the back and came out with a larger size. When he handed me the shirt, I asked if he wanted mine, and he said, “we have no use for a wet, used shirt.” Ha.

After that, I ran back to Earl of Sandwich, where we had a quick meal before heading back to the parking lot. The whole experience caused us around a 3 hour delay, which was pretty significant, as we had a long drive ahead to our destination in Switzerland. 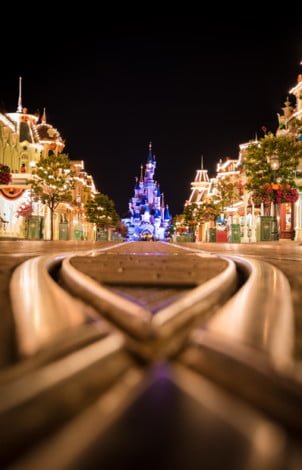 As for the rest of our adventures in Europe after leaving Disneyland Paris, if you followed along via social media, you know we headed to Switzerland as mentioned above, followed by Austria and Germany. (We were also in Liechtenstein for a blink-and-you-miss-it stretch.) Although we visited several places with connections to Walt Disney, Disneyland, and EPCOT Center in those countries, I don’t think it makes sense to continue the trip report further. I know some of you requested this, but this report has taken longer than expected, and I don’t want to drag it out further. I will make a compromise, though. If enough of you want (please leave a comment), I’ll do a single photo recap post of the Disney connections in all of those destinations. Additionally, I’ll write a trip report for our first trip of 2017. Fair enough? 🙂