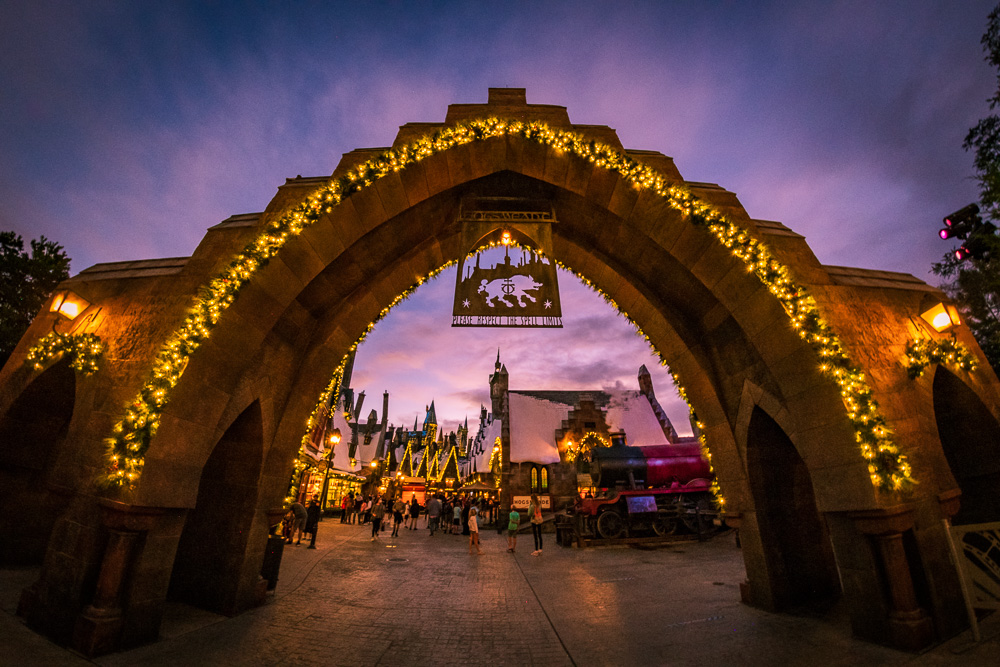 It’s the holiday season at Islands of Adventure. In this Universal Orlando park report, we share a look at Christmas in the Wizarding World of Harry Potter and Grinchmas in Seuss Landing, plus entertainment, decorations, doughnuts, and more thoughts on crowds.

Let’s start with the holiday crowds, which is where our Universal Studios Florida Christmas Report left off. In that, we predicted that Thanksgiving week could end up being busier than Christmas week due to the former’s combination of no Annual Passholder blockouts and fewer people traveling for Christmas (which does have AP blockouts).

After reaching capacity on many Saturdays in October, Universal Studios Florida and Universal’s Islands of Adventure both reached capacity by noon on the Monday of Thanksgiving week. During this phased closure, the parking garages stopped admitting additional cars, but guests staying at on-site Universal Orlando Resort hotels and those with dated tickets could still access both the parks. By 4 pm, both parks were once again allowing all guests to enter.

We anticipate this trend of heavy attendance continuing throughout Thanksgiving week, getting worse towards the long weekend. While Universal Orlando generally requires less overall planning than Walt Disney World, this is one exception to that rule.

As such, you’ll want to arrive first thing in the morning; even with Early Park Admission for on-site resort guests and select Annual Passholders all week, that’s the best approach. If you’re fine doing only a partial day, evening is also doable. If you arrive two or three hours after park opening, you’re gonna have a bad time. 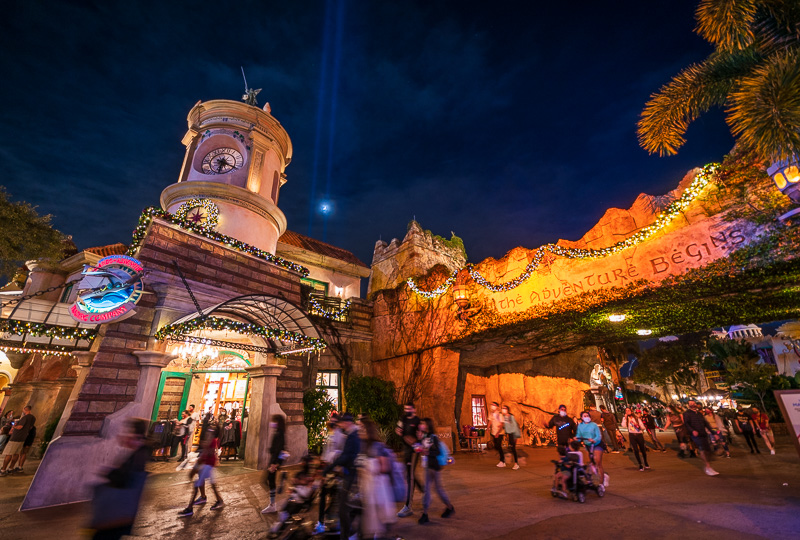 Unlike Universal Studios Florida, which has Christmas decorations up almost everywhere, Islands of Adventure is more limited. 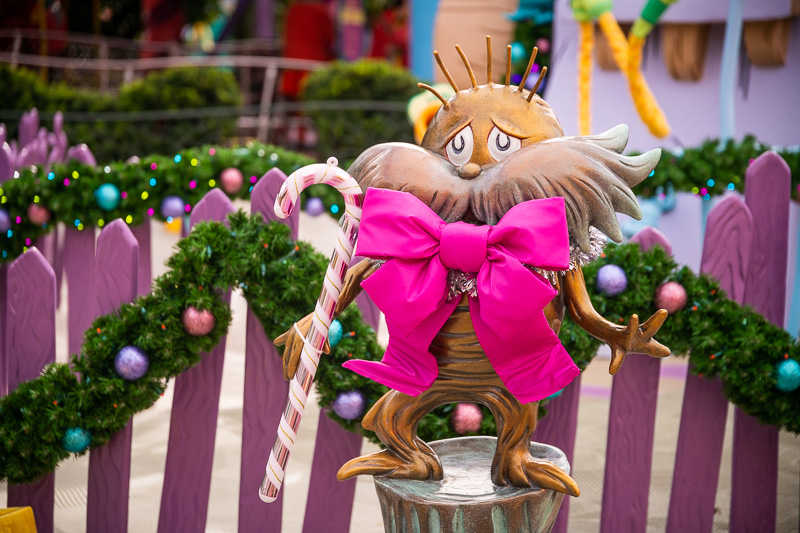 As someone who absolutely loves Christmas and dinosaurs, I really wish a holiday tie-in could be done with Jurassic Park.

Since the IP is a theme park with at least a modicum of real world awareness, arguably anything could go here. It’d probably just need to be established as canon via the films first. 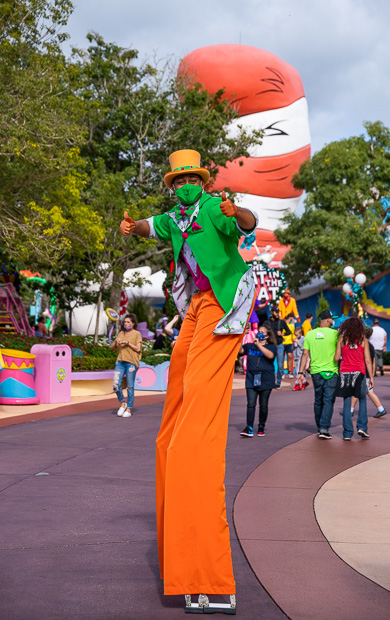 If someone at NBCUniversal is reading this, just think of the possibilities: Peacock needs content, and what better way to gain streaming subscribers and marketshare than with a Jurassic Park holiday special?

To really compound the benefits, make the holiday celebrated on Isla Nublar either Festivus or Ludachristmas. Endless synergy! 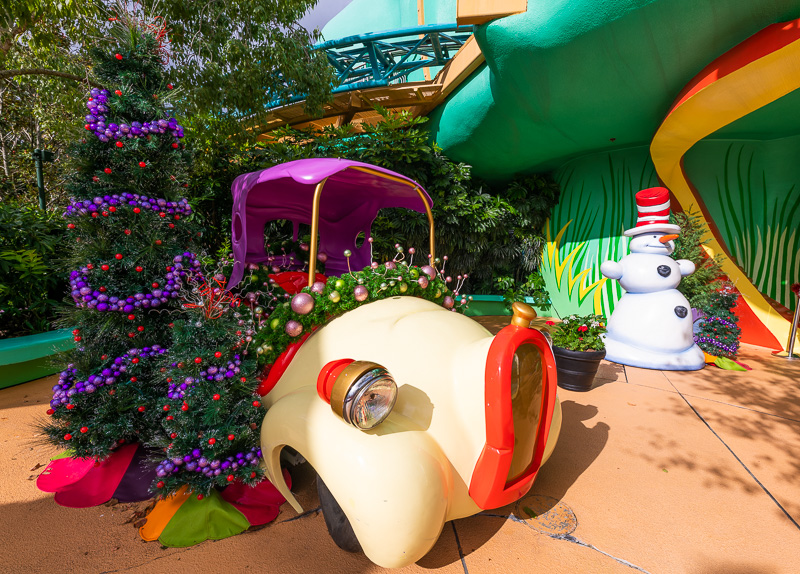 Again, it’s worth pointing out that no park at Walt Disney World has all of its lands decorated for Christmas. Even Magic Kingdom, which is most commonly associated with the holiday season, really only has a comprehensive decorations package on Main Street. The other lands are much more muted–or have nothing at all.

Not that we’re complaining or making excuses. It’s just easier to forget since we’re more familiar with Walt Disney World, and take for granted that some lands don’t have or need decorations. The same is true at Universal Orlando. 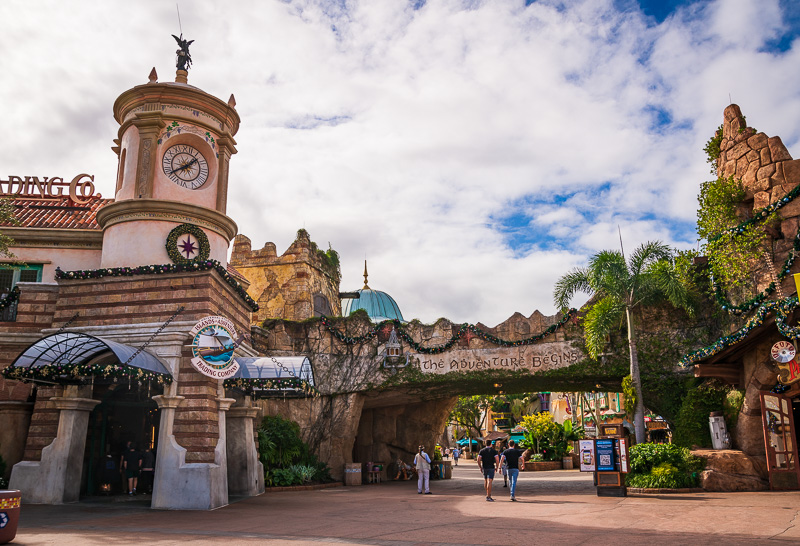 In terms of what actually exists in terms of the holiday season at Islands of Adventure, we have some light decorations in Port of Entry, enhancing what’s already a top-notch and underrated area. 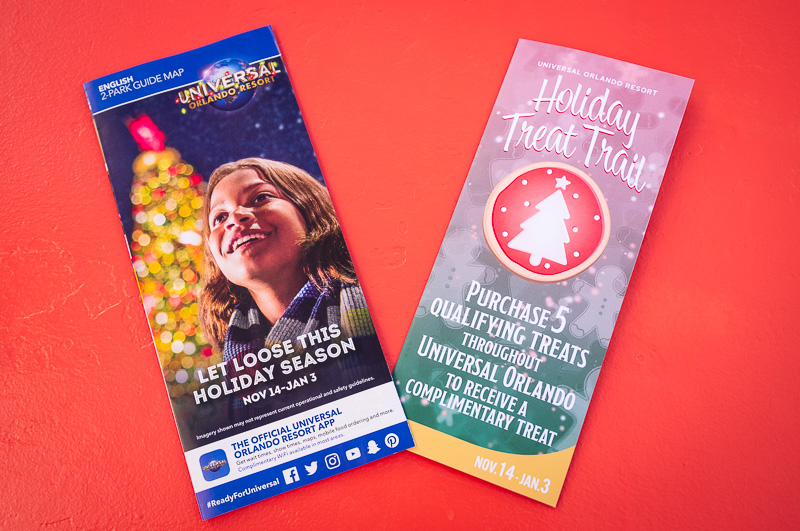 My original plan was to do the Holiday Treat Trail. After all, an excuse to eat 5 snacks in the name of research and getting something free.

I didn’t end up finishing. In part because 2 of the treats I would’ve had to purchase looked unappealing, and in part because I was stuffed after eating 3 of the items. 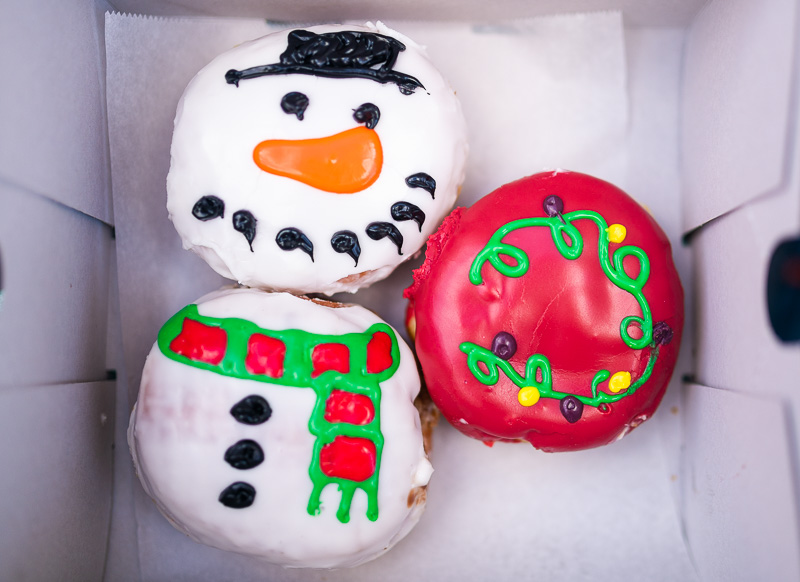 Speaking of which, here are the Christmas doughnuts from Voodoo Doughnut. This is technically in CityWalk, but it’s highly unlikely I’ll get around to writing a separate post about that before the end of the Christmas season. (I’ve actually had a draft review of Voodoo more or less finished since CityWalk reopened and still haven’t posted it.)

Suffice to say, these are among the best doughnuts I’ve ever had from Voodoo. The Snowman’s body, filled with chocolate peppermint custard, was my favorite. The Holiday Ornament, filled with gingerbread cheesecake, was a close second. I didn’t like the Snowman’s Head as much, but it’s still “good enough” to recommend buying. Might as well complete the trio! 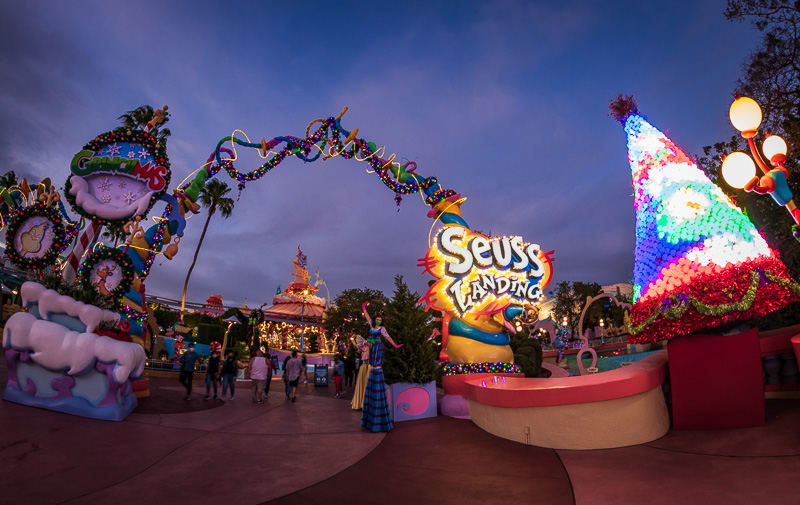 Back at Islands of Adventure, let’s head into Seuss Landing, which is home to Grinchmas.

At night, the two white trees flank the entrance of Seuss Landing and feature an array of synchronized designs (like the Grinch) and dancing lights. 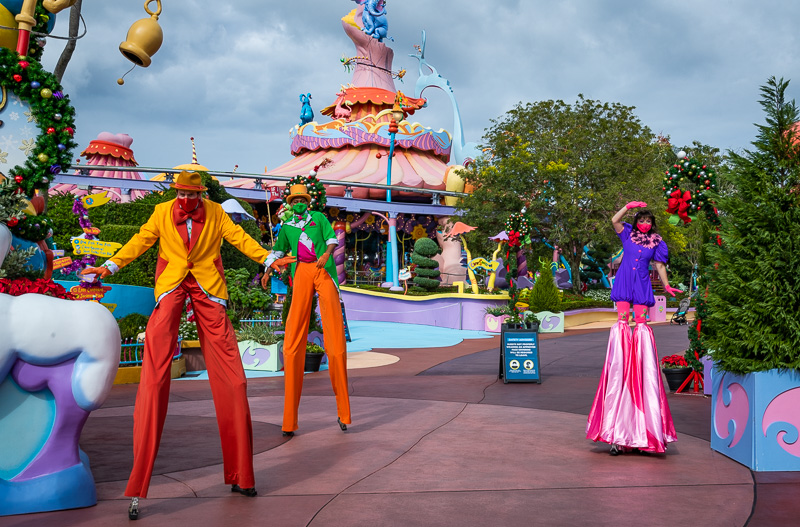 Throughout the day (and night), there are Whoville citizens wandering the land on stilts. Those without the built-in physical distancing of height perform on the stage near the All The Books You Can Read store.

While there are little shows on that stage, the Grinchmas Who-liday Spectacular is not happening this year. 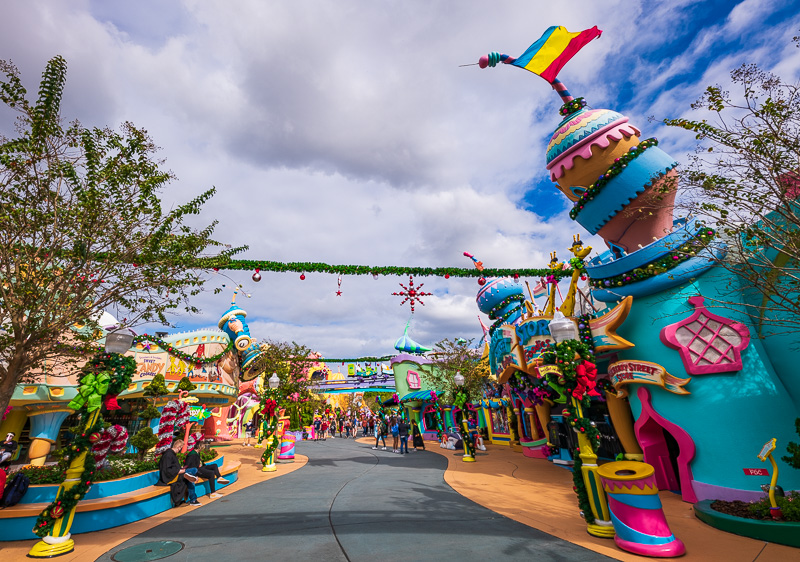 We didn’t do it, but there’s also the Grinchmas Photo Experience, which can be reserved in advance online here.

There, Grinch plays photographer due to physical distancing, snapping images of guests against a green screen and is digitally inserted into the photo along with a fitting backdrop. 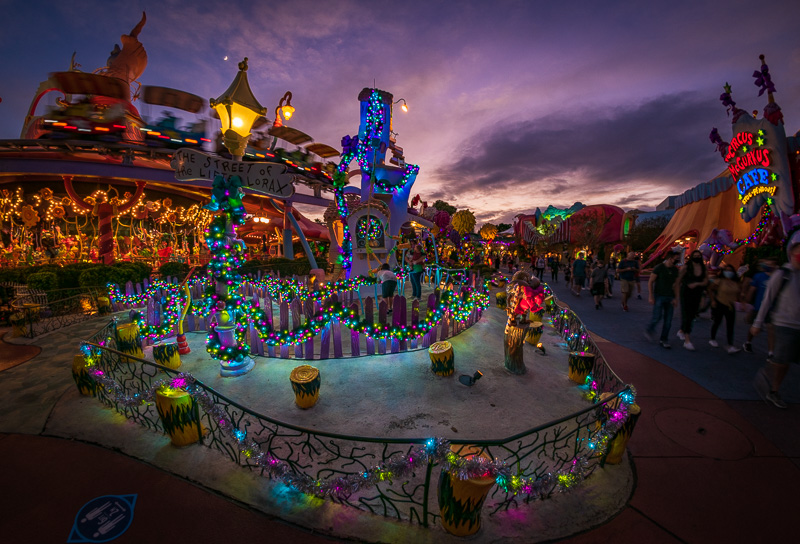 All things considered, Seuss Landing is the best-decorated area in Islands of Adventure.

Lots of garland, tinsel, and lights adorning the building exteriors, strung across the street, and even on attractions. It reminds me a bit of Toontown at Disneyland. Very well done! 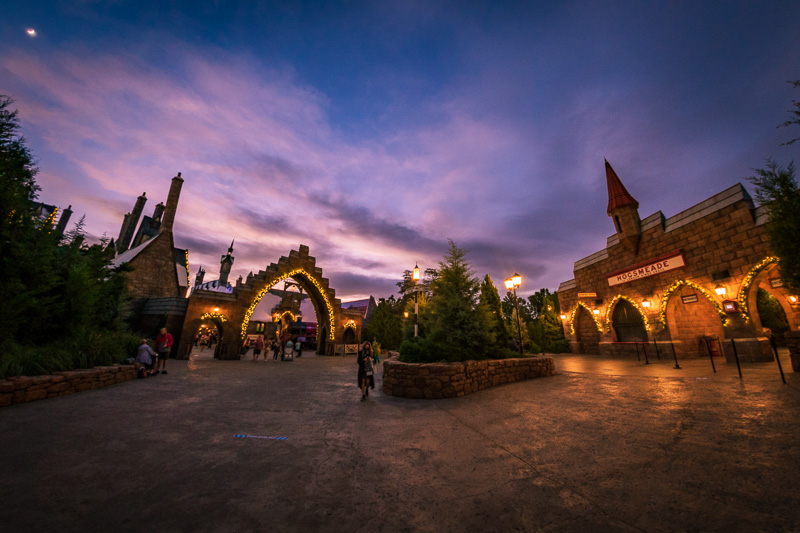 Then there’s the Wizarding World of Harry Potter – Hogsmeade.

With its storybook architecture and snow-covered rooftops, the core design of this land just feels like Christmas. 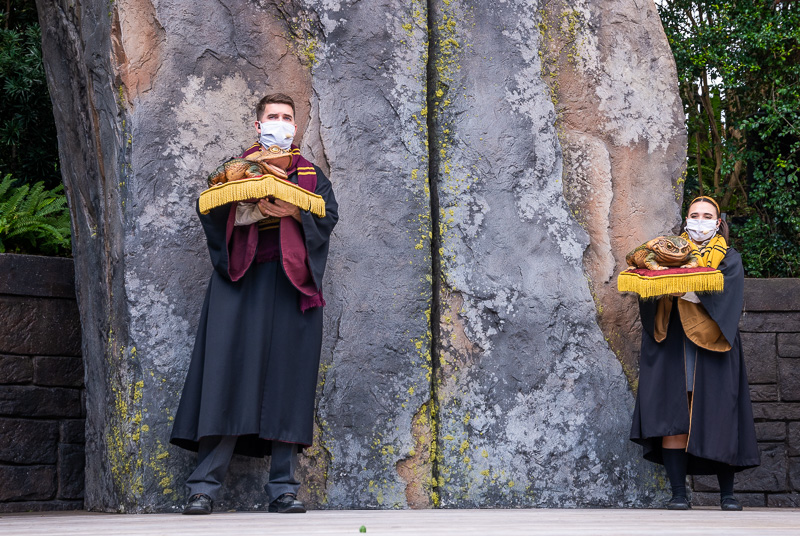 The main thing in Hogsmeade for the holidays is the Frog Choir.

As with all things Harry Potter, I have no clue why this exists. However, the language of frogs croaking is (to borrow a phrase) universal. And awesome. You don’t have to “get” Harry Potter to love this. 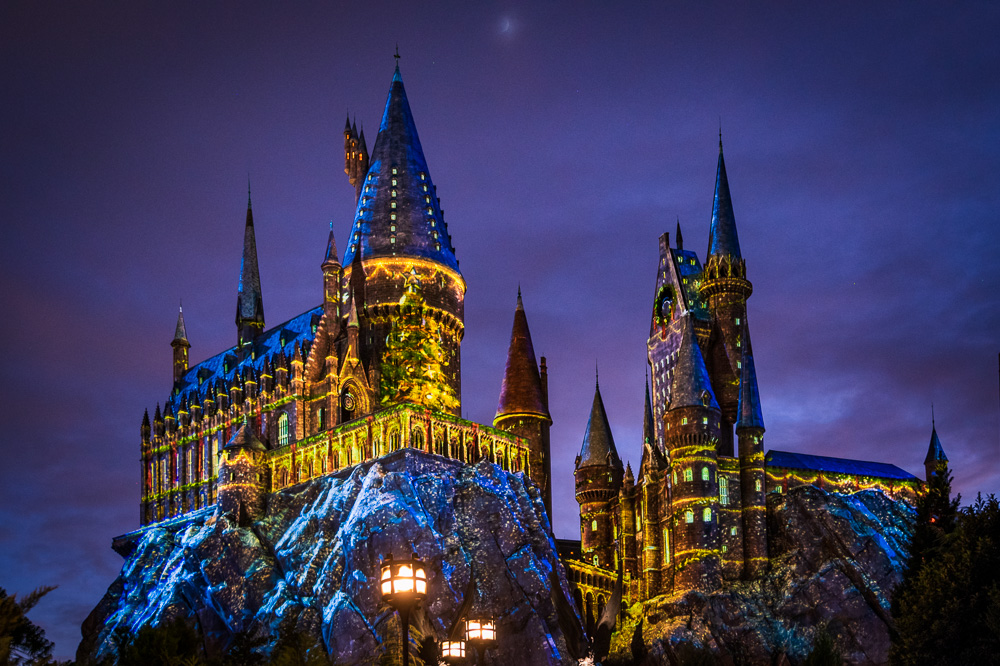 That has been temporarily suspended for the year (save for the holiday tour) due to physical distancing requirements. Probably a smart move given the limited space and how busy Hogsmeade already gets. 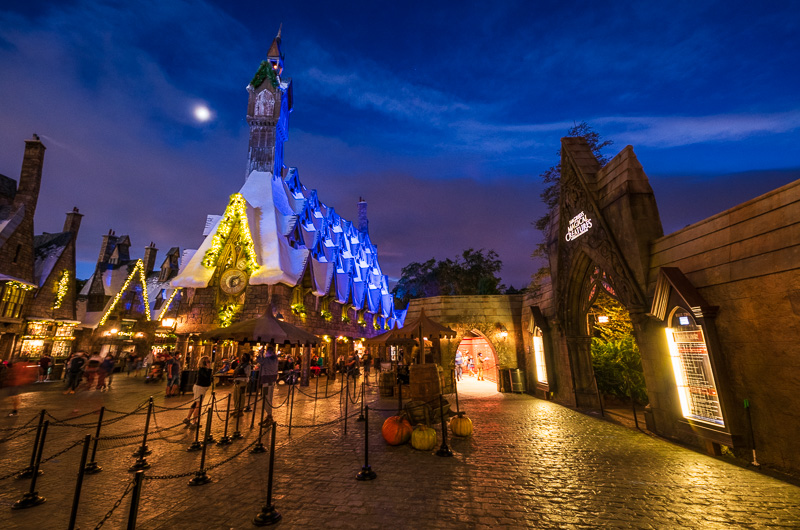 This evening was not particularly busy. Hagrid’s Magical Creatures Motorbike Adventure was posting a 45 minute wait towards the end of the night, and the queue was not extending out the front entrance. It’s thus likely the actual wait was even shorter.

Here are more photos from the Winter in the Wizarding World of Harry Potter: 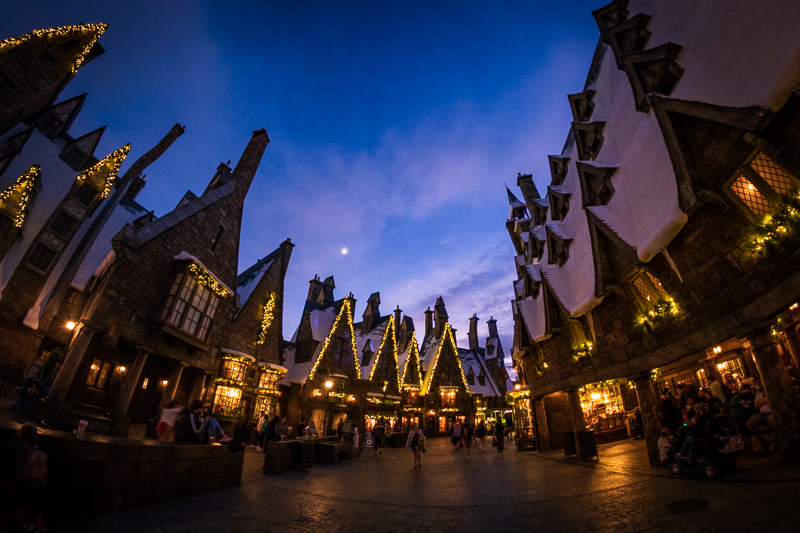 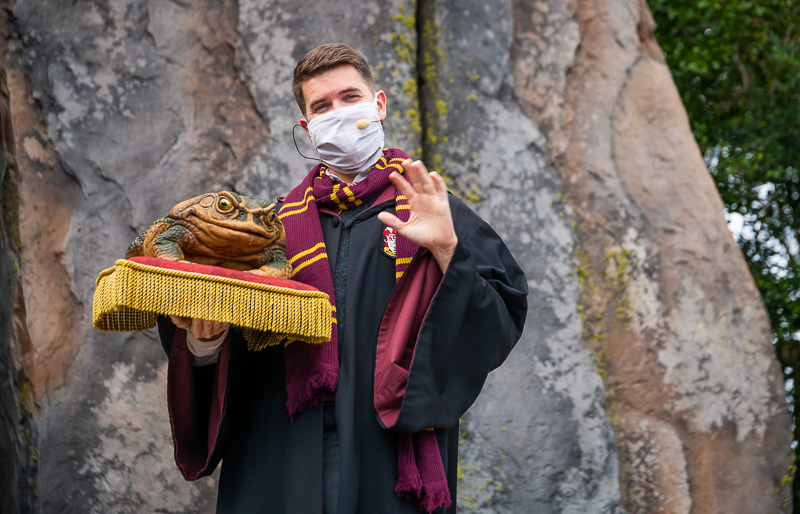 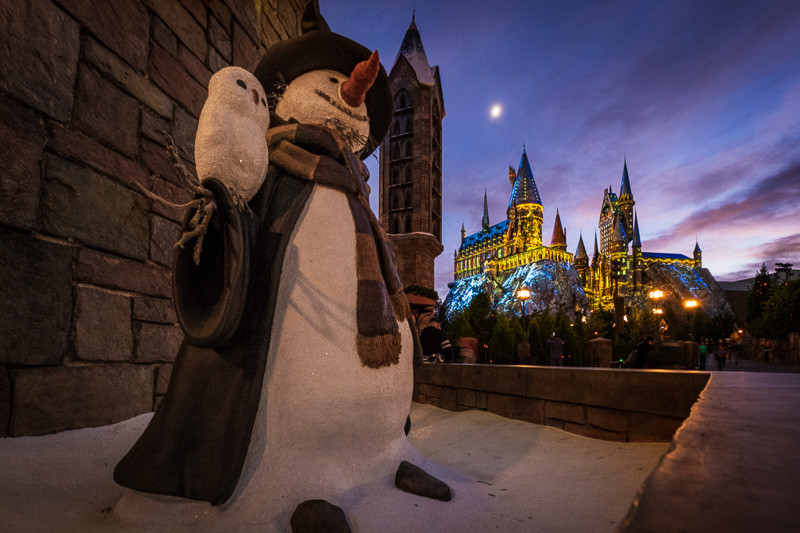 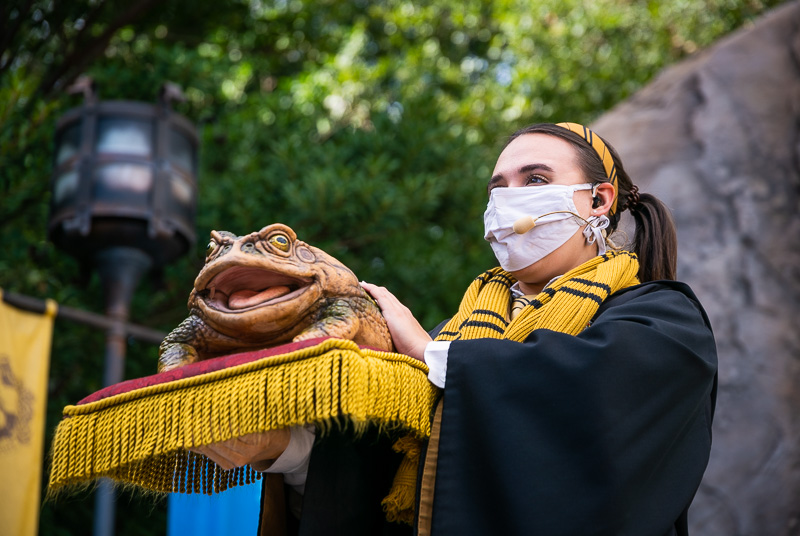 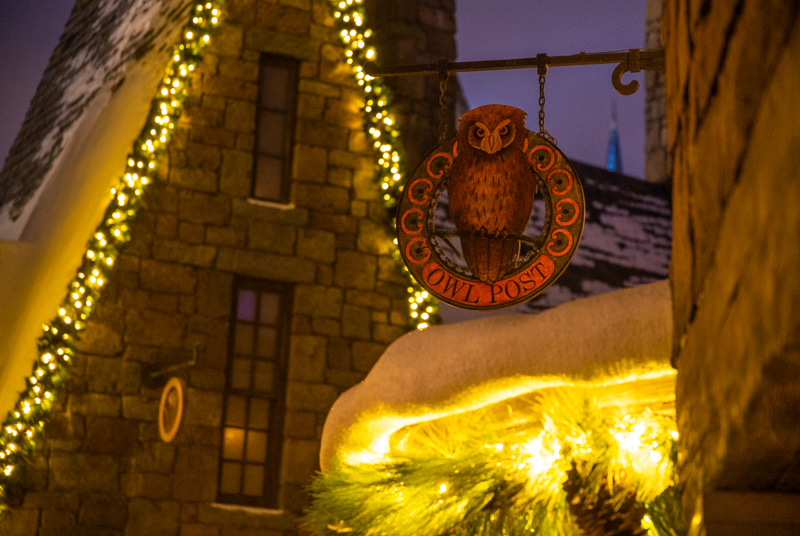 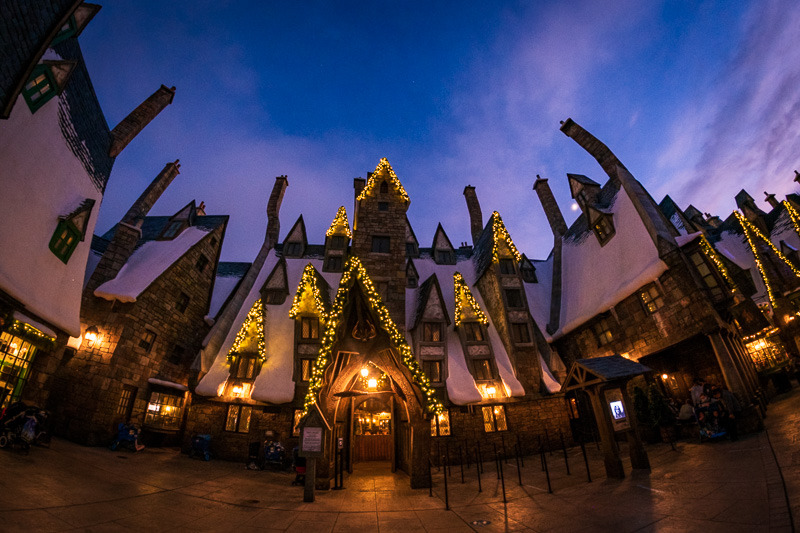 Ultimately, Islands of Adventure may not get into the Christmas spirit to the extent that Universal Studios Florida does, but there’s still a lot to enjoy. In particular, both Seuss Landing and the Wizarding World of Harry Potter offer whimsical takes on the holiday that are both exceptional.

If you’re only going to visit one of the two parks for Christmas, make it Universal Studios Florida. However, you really should consider doing both. The strength of those two lands and their pitch-perfect atmosphere, along with the Christmas croaking of frogs, plus the regular slate of attractions makes Islands of Adventure a must-do this time of year.

Have you been to Islands of Adventure for Christmas 2020? Agree that the ambiance is perfect in Hogsmeade and Seuss Landing? Any other highlights for you? Thoughts on holiday crowds at Universal Orlando for Thanksgiving week and beyond? If you’ve visited both Disney and Universal this Christmas, which do you think is doing better? Thoughts on anything else covered here? Do you have any questions about the current modified Universal experience? Will you be attempting to visit Central Florida this holiday season, or are you waiting until 2021 or beyond? Any questions we can help you answer? Hearing your feedback–even when you disagree with us–is both interesting to us and helpful to other readers, so please share your thoughts below in the comments!