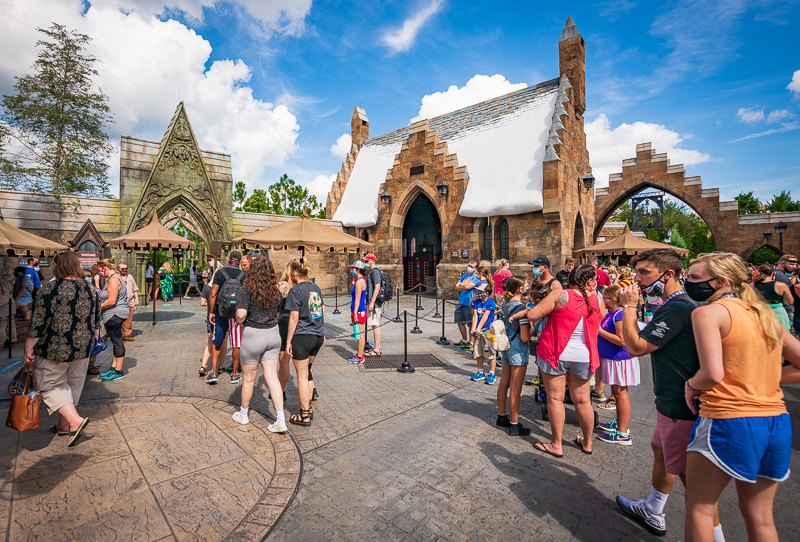 For this park report, we’re heading over to Universal Orlando Resort to do Islands of Adventure. Crowds have been picking up at Universal over the last couple of months, with the parks hitting capacity multiple weekends in October. In this photo report, we cover wait times and some of what we did throughout the day. Let’s start with Universal’s post-reopening successes.

I’ve been really impressed with the way Universal Orlando has handled its reopening. In many ways, their approach has been better–or at least preferable, in my view–to Walt Disney World’s. While still adopting the same health safety protocol, Universal opted not to require reservations and didn’t overcomplicate things. The proactive communications, clear policies, and the way Universal has demonstrated that they value their customers are all commendable.

Universal Orlando has also offered a variety of ticket, Annual Pass, and hotel deals that really make all the changes and cutbacks more palatable. And truly, not as much has changed at Universal, as the key on-site and AP perks among other offerings were never cut. Obviously, the style of Disney’s and Universal’s theme parks are very different, so it’s never an apples to apples comparison. Nevertheless, the value proposition remains strong at Universal Orlando right now, which makes it easier to recommend.

Still, we’ve never gone all-in on more granular coverage. We could blame you for that, and a lack of interest among readers. 😉 That’s only partly true–it mostly comes down to a lack of time on our end. It’s impossible for us to cover everything. Meaning that if we spend more time at Universal, that’s less of our hard-hitting Disney journalism. To that end, we’re curious if you want to see more Universal coverage and, if so, what? (Park reports like this, itineraries, dining, hotels, etc.) 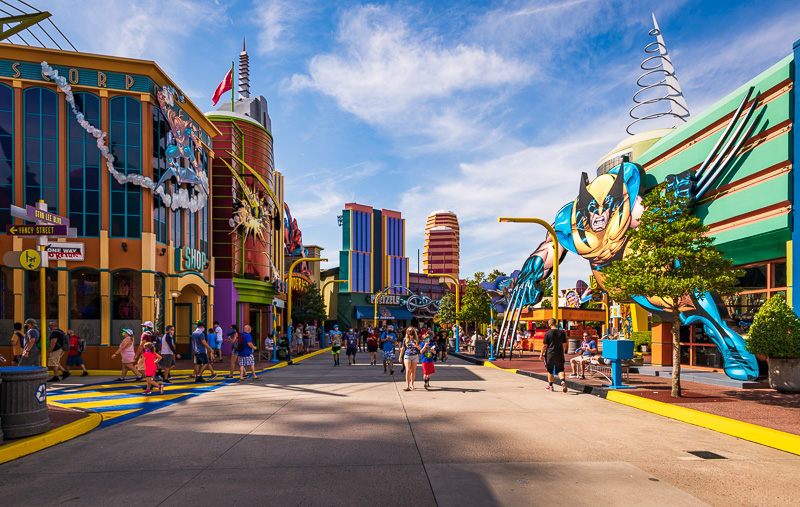 Selfishly, I’m hoping there’s some interest in this Islands of Adventure report and our upcoming Universal Studios Florida report. For one thing, I’ve really enjoyed our hotel stays thus far at Universal and “needing” to book the more expensive resorts “for the sake of research” is a great excuse for doing more.

Second, each visit to Universal Orlando is at least one ride on E.T. Adventure, which is right up there with Country Bear Jamboree on the list of potential UNESCO World Heritage Sites in Central Florida. With things on earth not going so hot, I’m ready to relocate to the Green Planet. 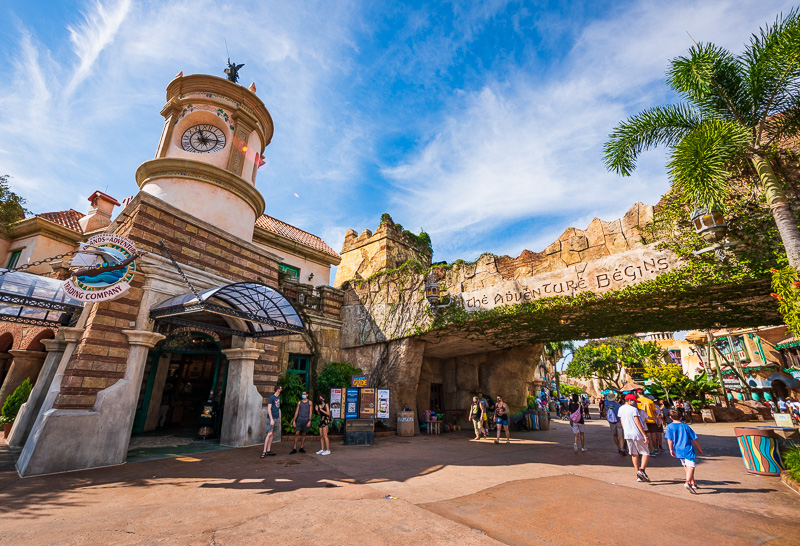 Now that the long-winded preface is out of the way, let’s get down to the brass tacks of this visit to Universal Orlando. Due to the drive, line at the parking booths, and getting into the park taking longer than expected, we didn’t enter Islands of Adventure right at rope drop.

So basically, Universal already shares something in common with Disney’s Hollywood Studios–taking longer than expected to enter–despite being about 30 minutes farther away from us. Once we did get into Islands of Adventure, we headed directly to the Wizarding World of Harry Potter… 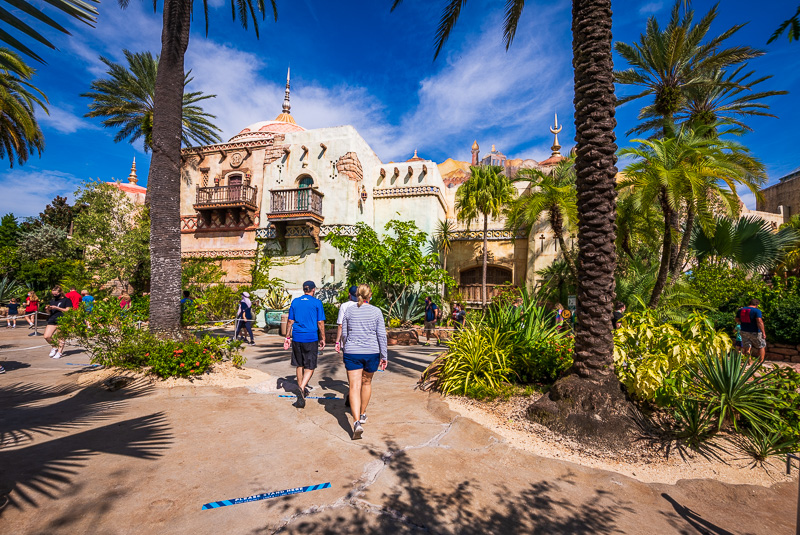 The Universal Orlando app indicated that the wait time for Hagrid’s Magical Creatures Motorbike Adventure was already 90 minutes, but wait times boards in the park said 60 minutes, as did the Hagrid’s marquee.

Even if the wait time was trending upwards and it ended up being somewhere in between, we figured this was going to be about as good as it got. Wait time data suggests no drop-off over the course of the day. 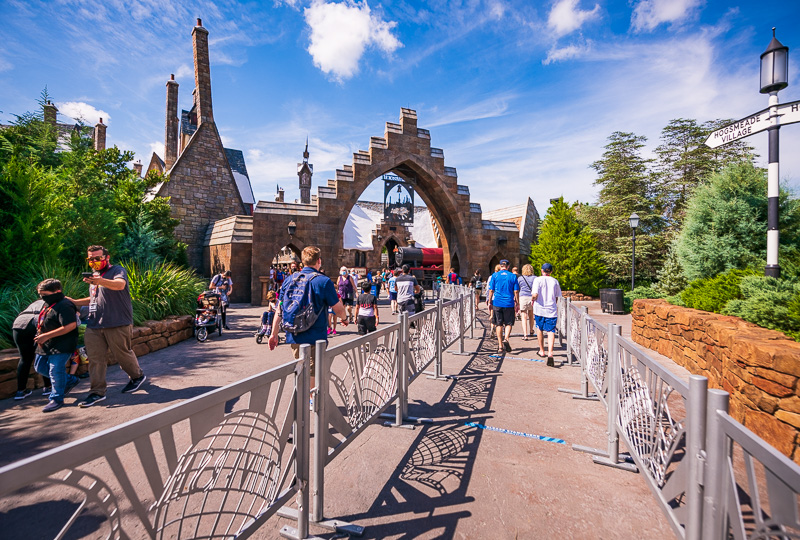 The queue wrapped all around the Lost Continent, including into the theater that previously housed the Eighth Voyage of Sindbad stage show.

This whole area isn’t currently used for much of anything, so overflow queue for Hagrid’s seems like as good of a use as any. Plus, the venue could probably house a lot more of the extended queue if necessary on busier days, as we only entered the upper area of the amphitheater. 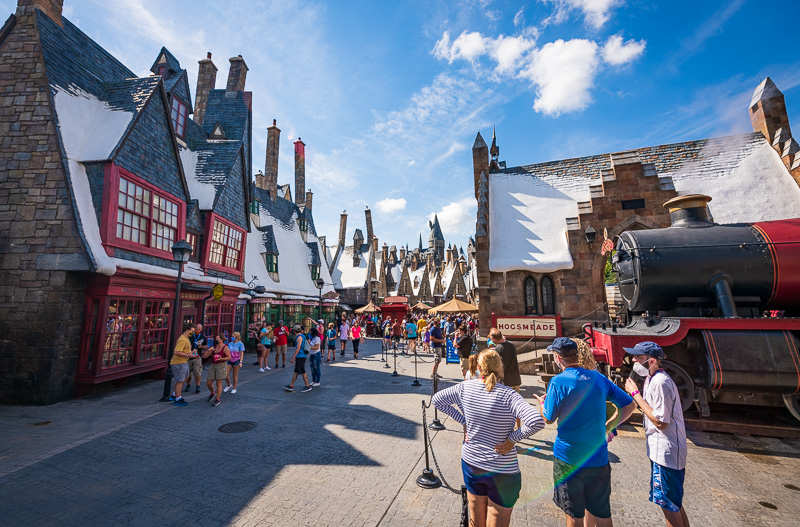 Regardless of whether the posted wait time was 60 or 90 minutes, the actual wait for Hagrid’s Magical Creatures Motorbike Adventure ended up being much lower–only 35 minutes.

Given that this was Orlando’s second-biggest new attraction debut of last year (after Star Wars: Rise of the Resistance) and is the best themed roller coaster in Central Florida, I’d say that’s not too shabby. I won’t willingly wait 35+ minutes for much, but Hagrid’s is definitely one such attraction. 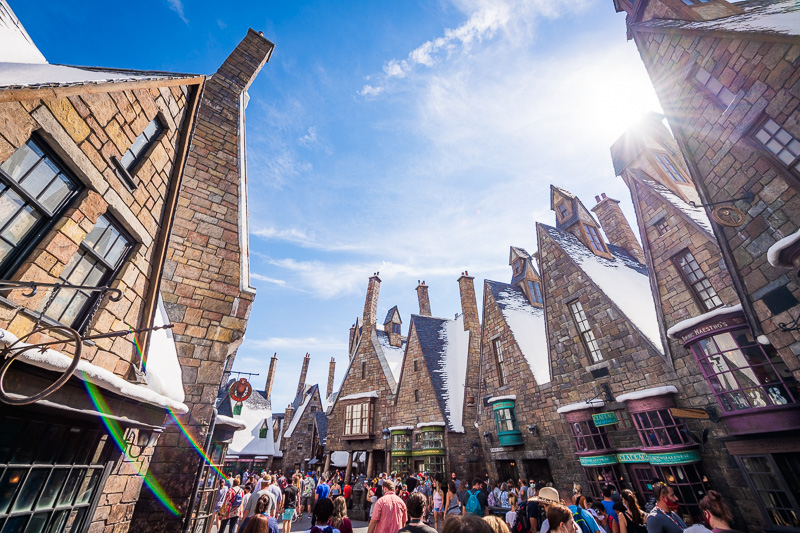 After wandering around the Wizarding World of Harry Potter for a bit, we figured it was time for lunch.

With crowds peaking in Hogsmeade and already a long line for Three Broomsticks, we thought it might be a good time to take the Hogwarts Express Train over to Universal Studios Florida. Posted wait time was 60 minutes; our actual wait was 25 minutes. 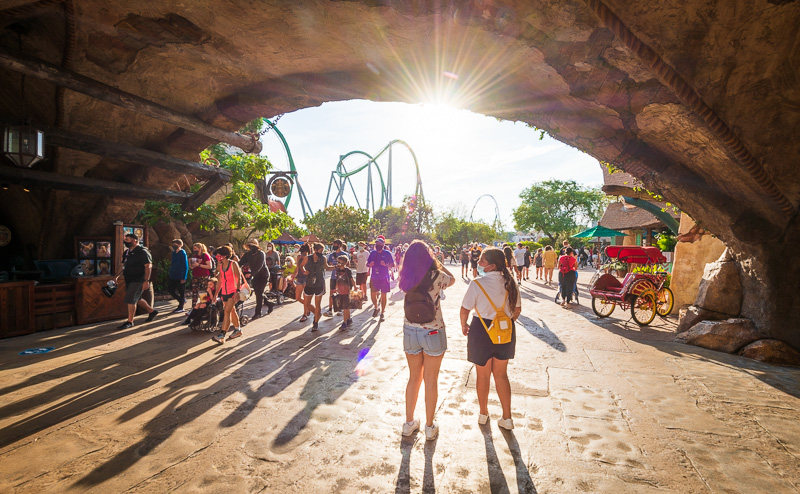 We’ll have a separate report on Universal Studios Florida very soon, but for now let’s fast-forward to late afternoon when we returned to Islands of Adventure.

Rather than doing a play by play of our afternoon, I’m just going to offer some photos and stray thoughts in the captions… 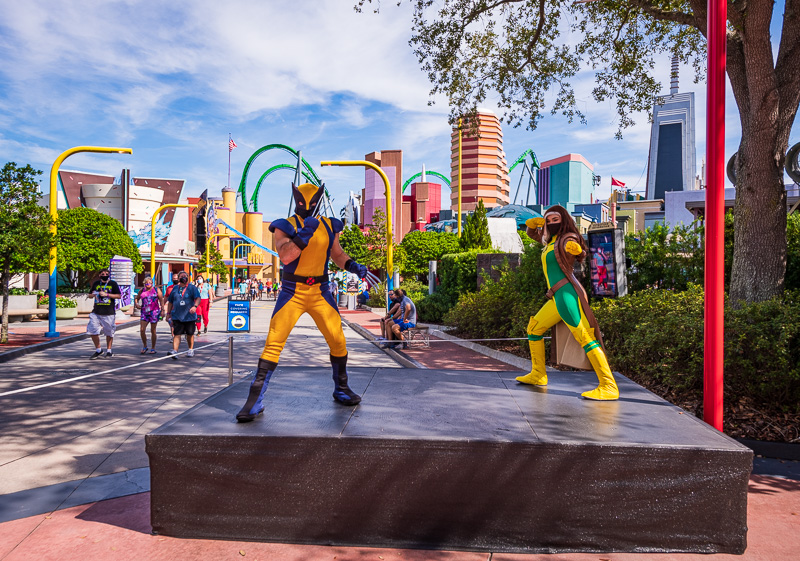 Universal Orlando is doing a great job with the socially-distanced selfie stations.

This one probably is not the best example as these costumes look like they’re knockoffs from the clearance aisle of Party City. Nevertheless, there are a variety of options with little to no wait…which is probably because no one wants to meet any of these characters. But still. Points for effort. 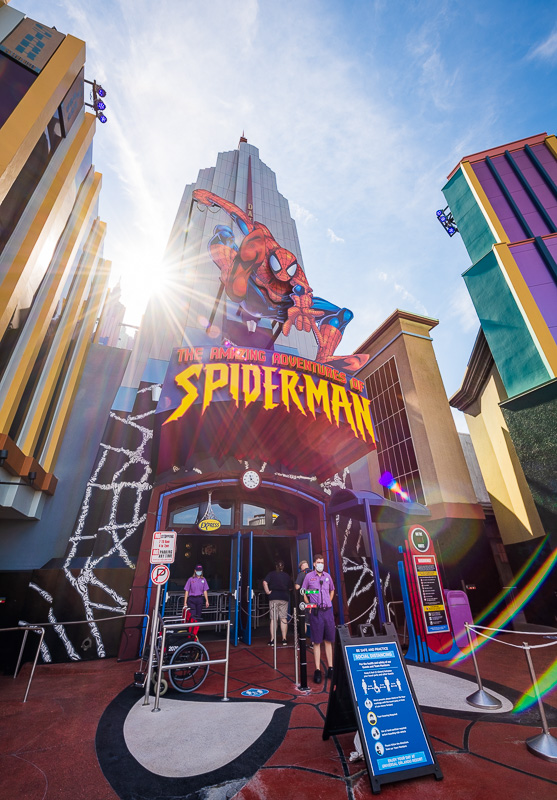 “Knockoffs from Party City” might be an apt way to describe the aesthetic of Marvel Super Hero Island to anyone only familiar with the movies, and not the comics.

However, one undeniably top-tier component of the land is the Amazing Adventures of Spider-Man, which is one of the best theme park attractions in the world. It honestly shocks me that Imagineering chose Spider-Man as the character for a DCA attraction because it’ll inevitably invite comparisons to this twenty year old attraction–and I doubt most objective assessments will be favorable towards Disney. 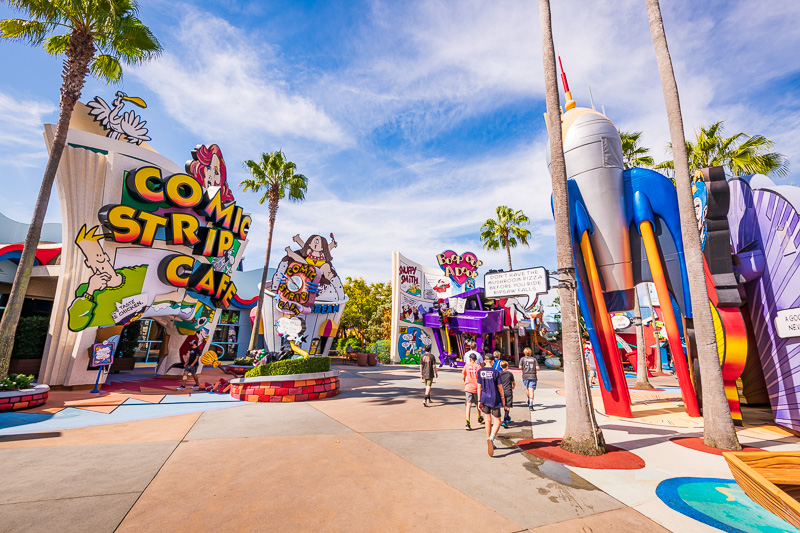 Universal does this thing where it oscillates between flavor of the month IP and characters no one born this century has ever heard of. Maybe Walt Disney World does the exact same thing and I’m just too close to the subject to have a clear view.

Or, maybe I’m still bitter that Universal removed all but one of my childhood favorites. To add insult to injury, Universal then had the nerve to replace the new cult classic Disaster with Fast & Furious Supercharged. That abomination was literally one of the worst theme park attractions/segments of all-time years before it even began construction in Florida. 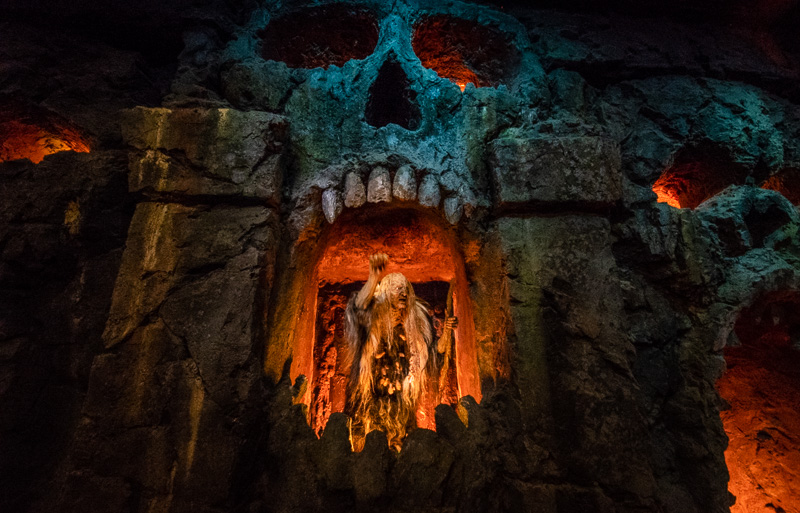 Speaking of childhood favorites, let’s turn to the park’s King Kong attraction. While this blog (rightfully) sings the praises of E.T. Adventure, my all-time favorite Universal Studios Florida attraction is Kongfrontation. As a child, this was a top 5 of Orlando for me–not in the same league as Journey Into Imagination, but close. 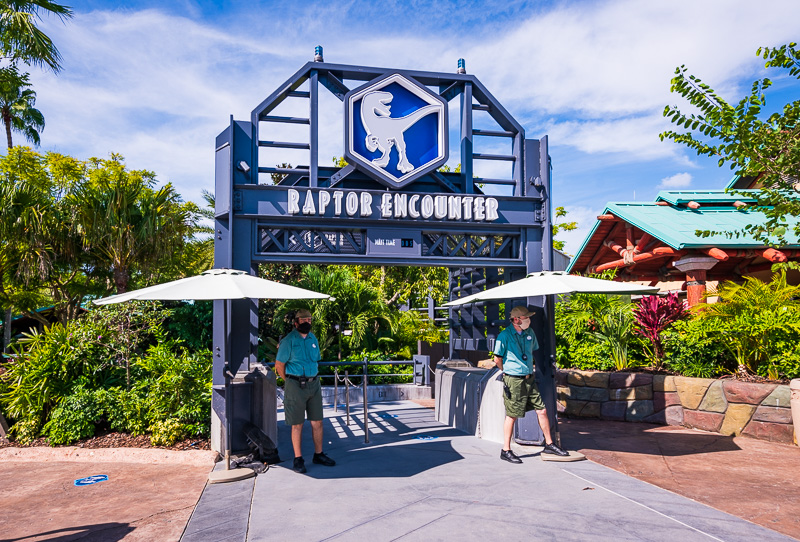 Jurassic Park is also a really solid land, and one that is improving with age.

The Raptor Encounter is fun, bringing some of the magic from the Discovery Center into a standalone experience. 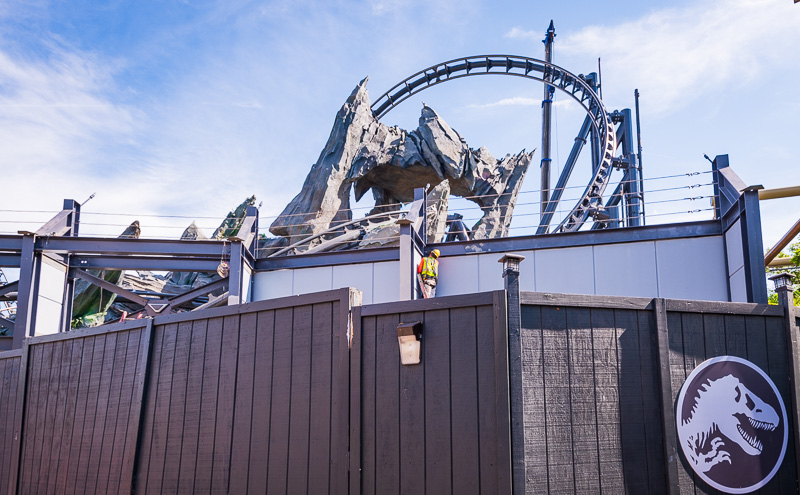 The track layout looks tremendous, as does the rockwork and thematic elements. It also looks like VelociCoaster won’t introduce the same type of clutter to the land as the Flying Dinosaur. If it’s even half as good as that (very different) roller coaster, VelociCoaster will be a top-tier addition to the Jurassic Park/World land. 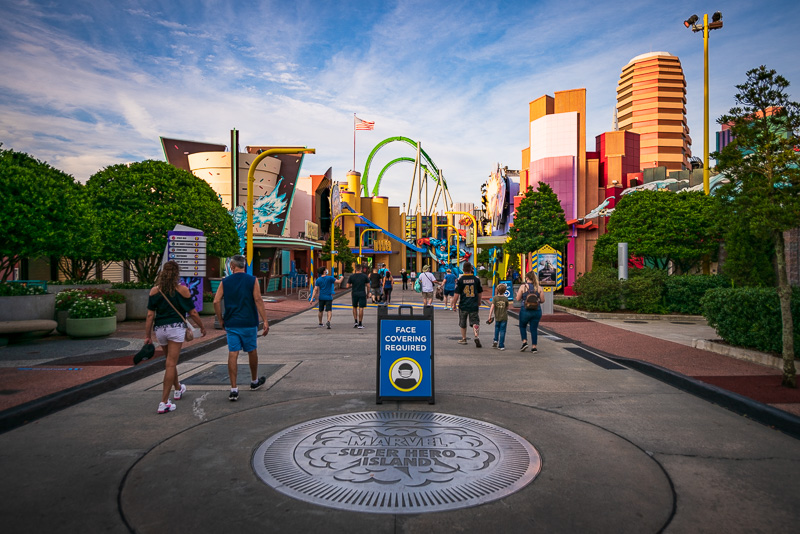 Ultimately, it was a really fun day at Islands of Adventure and Universal Studios Florida. A long day, but we got a ton accomplished and the visit had great flow (thanks to park hopping) that we haven’t experienced recently at Walt Disney World. This “great flow” may not be readily apparent here since this Islands of Adventure park report is clunky and disjointed.

In my defense, it’s not easy to write something like this since I don’t know really know where to begin. Do I assume most people reading this have no experience with Universal, and start from square one with a bunch of background that would be absent from our comparable Walt Disney World park reports? Or do I assume the primary audience is Universal fans who have said knowledge, and simply leave those who don’t behind in the dust? In retrospect, it would seem I’ve chosen a “worst of both worlds” approach that makes a range of assumptions and confuses or alienates everyone. Perhaps we’ll find our footing in the Universal Studios Florida park report. Or perhaps not, and this will end up being a very short series of interest to no one. We shall see!

Have you visited Islands of Adventure in the last couple of months? Did you rope drop Hagrid’s Magical Creatures Motorbike Adventure? Stay until park closing? What was your experience with crowds and wait times? If you’ve visited both Disney and Universal post-reopening, which do you think is doing better? Do you have any questions about the current modified Universal experience? Will you be attempting to visit Central Florida this holiday season, or are you waiting until 2021 or beyond? Any questions we can help you answer? Hearing your feedback–even when you disagree with us–is both interesting to us and helpful to other readers, so please share your thoughts below in the comments!