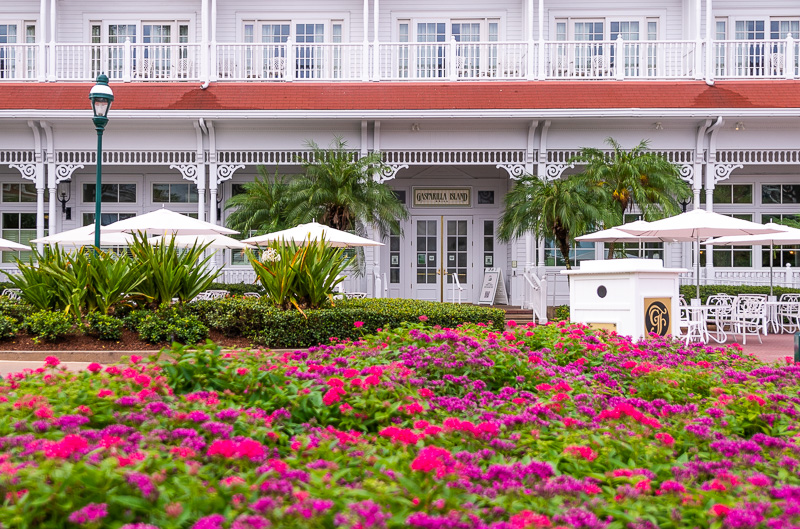 We invited distinguished scientists from all over the world to come and work here at the Really Top Secret Disney Tourist Blog Labs. Unfortunately, none of them showed up. So instead, the two of us do all of the research and field testing, and would like to think we “walk the walk” so to speak.

Rather than just doing the fun stuff at Walt Disney World, Disneyland, etc., we also do things like stay in shady motels near the parks that are literally collapsing on guests to tell you whether they’re worth the money saved (absolutely not). Sit at bus stops and time transportation frequency at the Skyliner resorts. Buy everything at the Italy booth, knowing full well it’ll be terrible.

Then there’s the “research” with air quotes. Stopping at our favorite ice cream spots to perform quality control checks. Watching Country Bear Christmas to confirm that the international treasure is still blowing the mind of every guest who sees it. Spending hours upon hours testing the rocking chair and fireplace comfort levels at Wilderness Lodge. Essential stuff, but hardly grueling. Our latest “investigative reporting” definitely falls into the latter category…

In actuality, this is where the overwhelming majority of our research falls. Even most things we wouldn’t do except ‘for the sake of the blog’ end up being fun or at least having silver linings. Things like face character dining that make me uncomfortable have given us a convenient excuse to dine inside castles and eat delicious steaks. Combing through public documents and meeting notes has taught me a lot about a range of interesting topics totally unrelated to Disney. Again, you get the idea.

Today’s “research” isn’t even the begrudging or silver lining type. It’s the flat out fun variety, as I pulled the “research” card to give me an excuse to order multiple desserts for dinner in lieu of “real” food. Just to investigate whether or not it could be done… 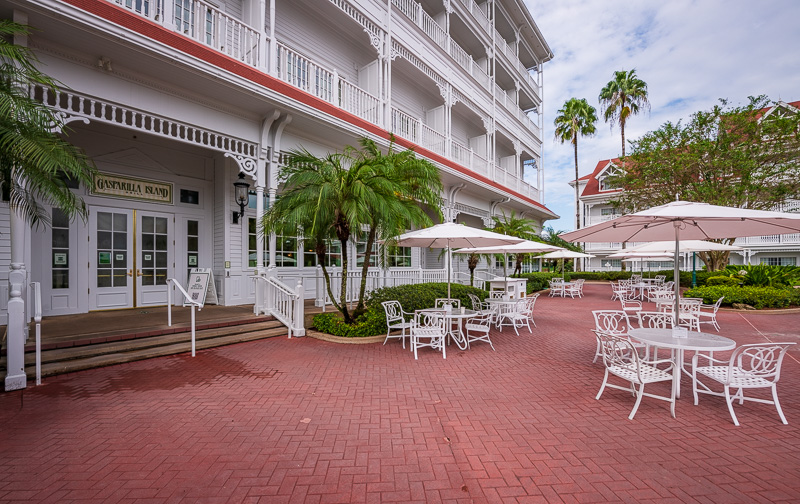 For this dinner, we headed to Disney’s Grand Floridian Resort & Spa to eat at Gasparilla Island Grill.

A few years ago, this counter service restaurant was overhauled, totally redoing the menu, which catapulted it to the top of our List of the Best Counter Service Restaurants at Walt Disney World. It’s been going slowly downhill since–but still enough of the menu retained to make it worthwhile. With more removed during the phased reopening, that’s not currently the case. 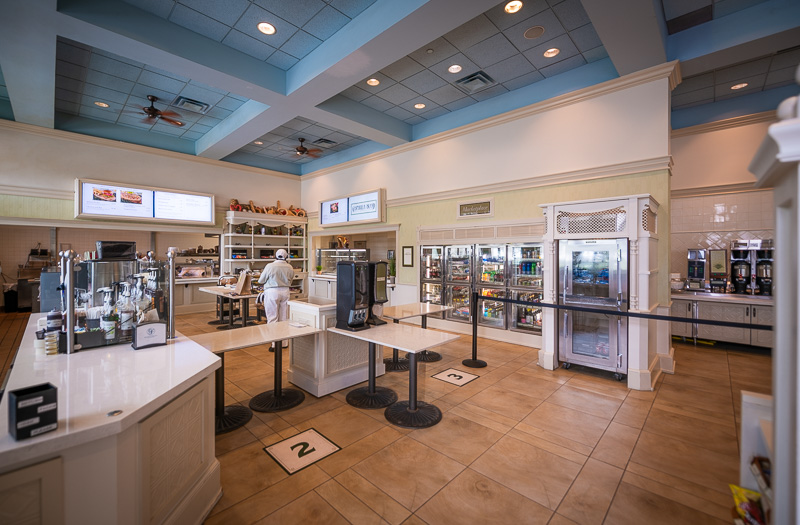 Nevertheless, we were committed to dining at Gasparilla Island Grill and wanting to check out what modifications were in place.

As you can see, the interior has been modified with pickup stations and the self-service stations all blocked off, which are now staffed by Cast Members. On the plus side, it’s possible to order from the register here, so Mobile Order is not required (but still recommended). 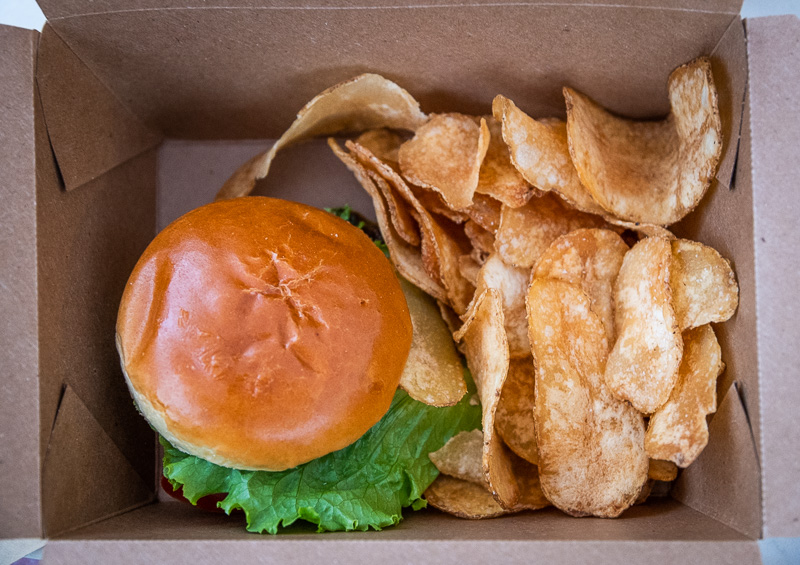 Sarah ordered the Impossible Burger topped with “Cheddar” on a Brioche Bun served with House-made Chips. (Apologies for the photo, I snapped it out of habit without the expectation of actually using it.)

While this patty purports to be an Impossible Burger, it tasted like black beans that were compressed, dehydrated, dry-aged, smoked, and slow-cooked. Among the worst things I’ve ever tried at Walt Disney World–I don’t know how Sarah ate it all. (She’s the real MVP in this research meal.) 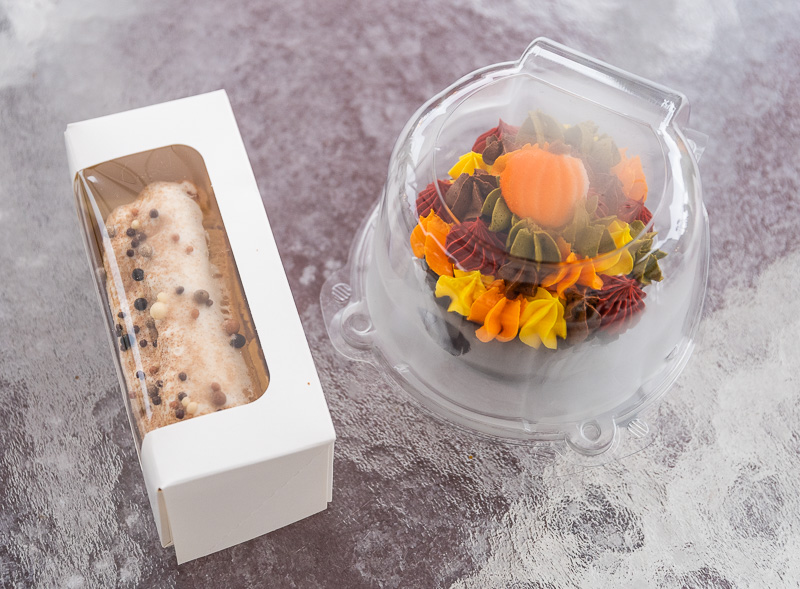 For lack of better options, I opted to order two new desserts…for research. In actuality it was both about researching something new and that they looked and sounded fantastic–way better than the entree alternatives on the menu.

One thing that we will not be researching is the list of ingredients on each package. I didn’t even realize there are as many artificial colors as those found in the cupcake. (When it comes to Walt Disney World ingredients, I’d simply rather not know. Ignorance is bliss.) 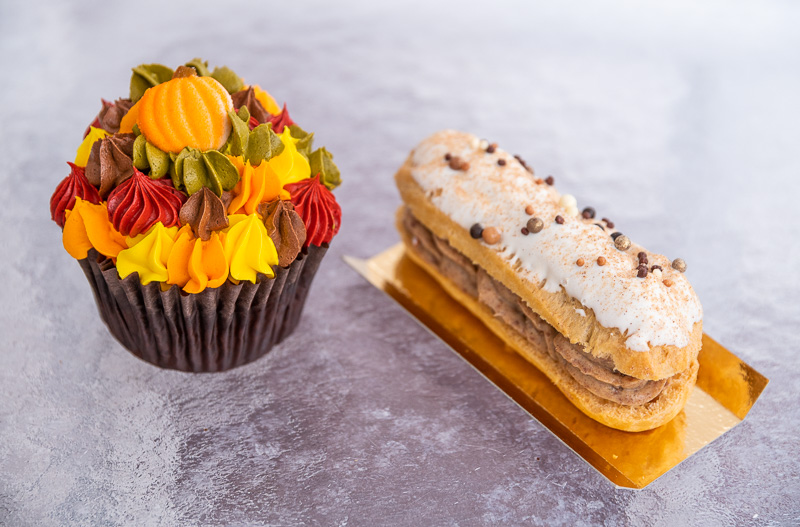 Here the desserts are “unboxed.”

On the left is the Fall Flavors Cupcake; on the right is the Churro Ã‰clair. Total cost for the two was just over $12–less expensive than that Impossible Burger! 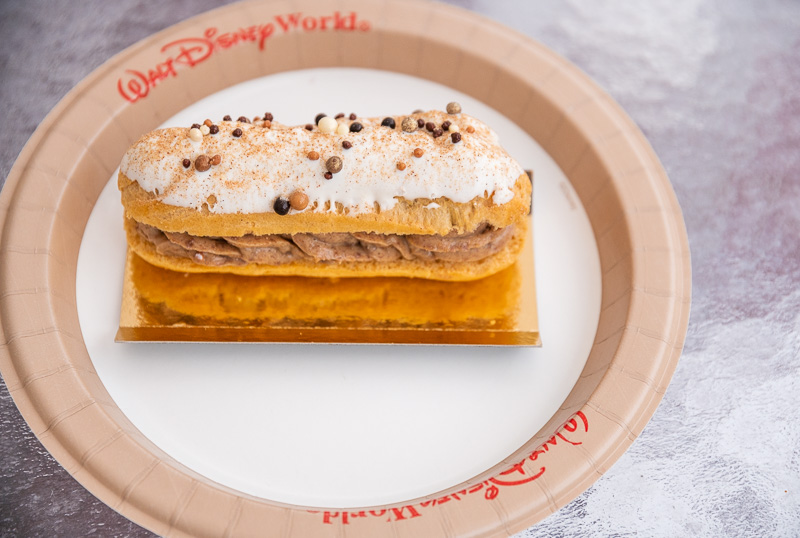 I’ll be the first to admit that I think Walt Disney World’s churros are vastly overrated. They are frequently stale or overcooked and, quite frankly, Costco does them better for one dollar. 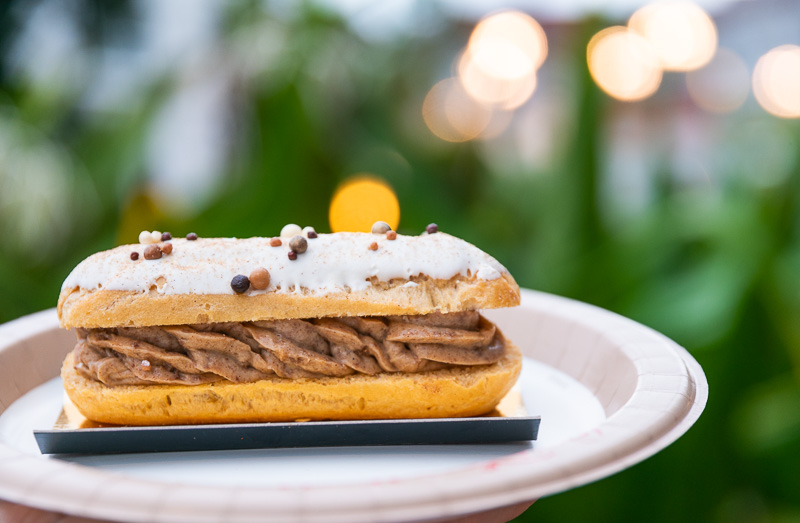 Thankfully, the Churro Ã‰clair does not suffer from these same faults.

It offers the same signature flavor, but exponentially more ambitious. The pastry itself is flaky and fresh, the filling is fantastic, and offers just enough texture to evoke the iconic park snack. Basically, the Churro Ã‰clair takes everything that works and is beloved about churros elevates that, and discards the rest. Highly recommended. 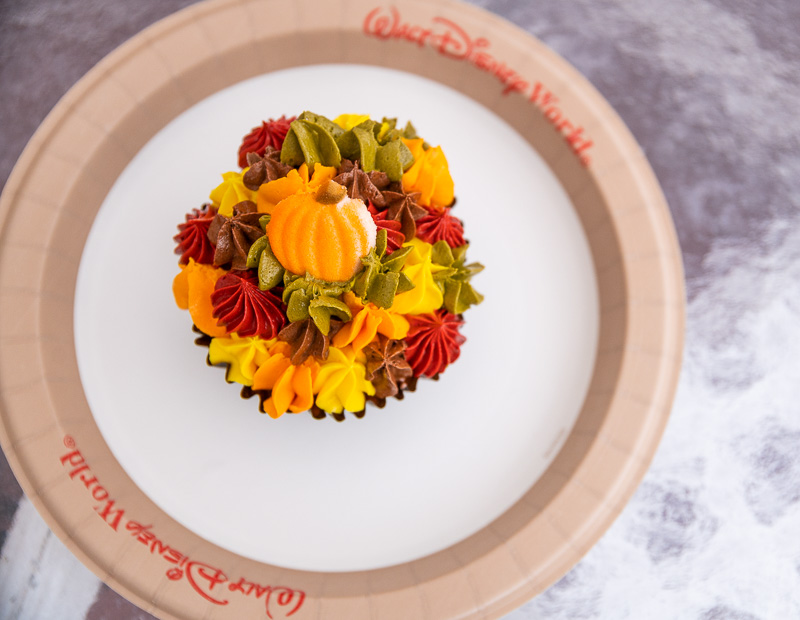 Next, the Fall Flavors Cupcake: “Cinnamon-spiced Cupcake with Apple Filling topped with a Sugar Pumpkin and Maple Buttercream in festive fall colors.”

Setting aside the eye-popping list of ingredients, this is absolutely fantastic. Truly a next-level Walt Disney World cupcake that’s nothing like the norm. 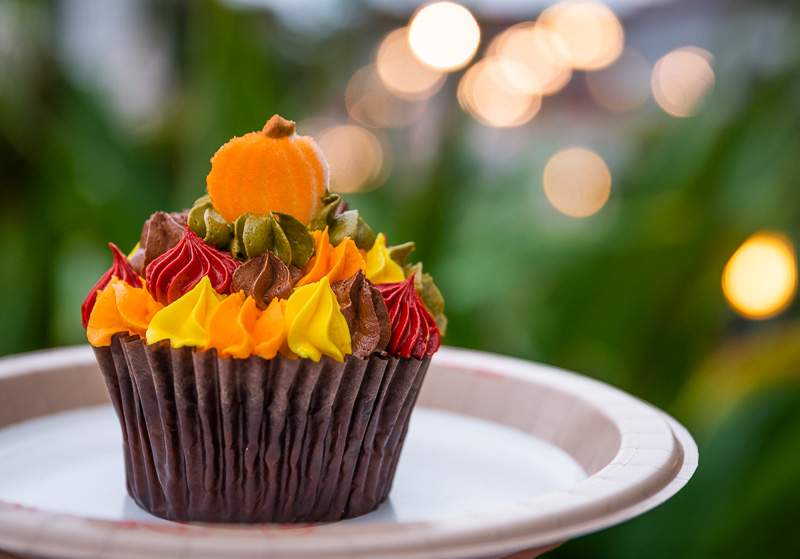 Had I not made the mistake of reading the list of ingredients, I would’ve said this tasted more natural and less artificial.

It’s definitely really (REALLY!) sweet, but the spectacular pumpkin and maple flavors to the buttercream give it more of an “earthiness” (not quite the right term, but I’m having a tough time articulating how it tasted). The typical buttercream on a Disney cupcake tastes more like a color, whereas this is flavors found in nature. 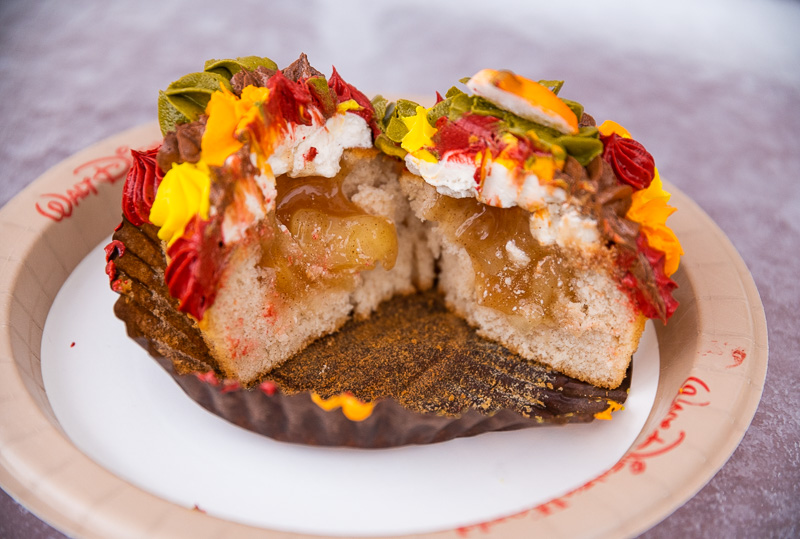 Then there’s the cake itself, which is denser and has a cinnamon flavor through and through. The apple inside is another wonderful touch, and a far cry from the normal filling.

All in all, the varied textures and range of fall flavors culminate in a cupcake that looks and tastes excellent. It’s definitely sweet, but not in an overly fake or excessive way. Suffice to say, one of my all-time favorite Walt Disney World cupcakes. This is also highly recommended–my pick if you’re only ordering one of the two. 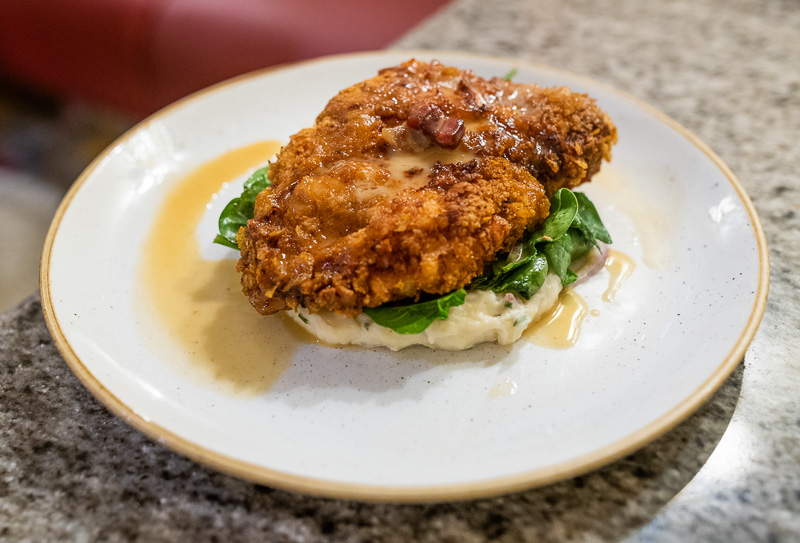 Ultimately, my investigative reporting confirms that two desserts can make a great dinner at Walt Disney World. Probably not the most healthy meal, but definitely as filling and tastier than anything else I would’ve ordered (which also wouldn’t have been the pinnacle of healthy eating) if recent history with Gasparilla Island Grill is any indication. Plus, a sugar high as a bonus!

While this post might seem a bit ‘excessive’ these desserts were fantastic and I think it’s worth drawing attention to fun ‘diversions’ at Walt Disney World right now given all of the many cuts and snack spots that are still closed. While I would not recommend a special trip over from Magic Kingdom just for these desserts (there truly are no entrees on the current/temporary menu worth seeking out), I would recommend a progressive dinner, starting at Grand Floridian Cafe for their buttermilk-fried chicken (see above, or my glowing review here) and finishing here for dessert.

Have you tried these new desserts at the Grand Floridian? Any feedback on recent meals at Gasparilla Island Grill? Have you tried the Buttermilk-fried Chicken at Grand Floridian Cafe? Do you agree or disagree with our review? Any questions we can help you answer? Hearing your feedback–even when you disagree with us–is both interesting to us and helpful to other readers, so please share your thoughts below in the comments!

11 Responses to “Dessert for Dinner at Disney World: An Investigative Report”