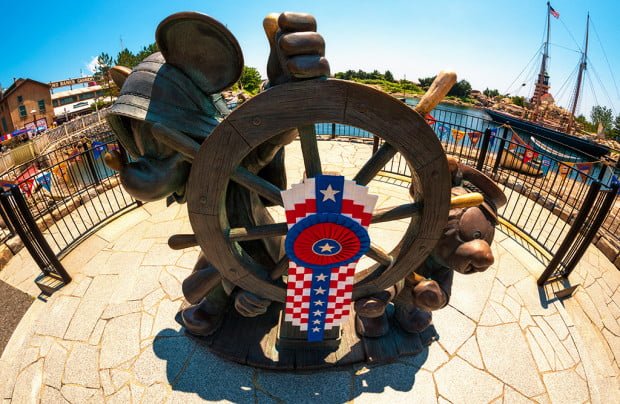 Journeys with Duffy is the 10th anniversary celebration of Duffy the Bear at Tokyo DisneySea, running now through March 18, 2016. The celebration takes place in Duffy’s hometown of Cape Cod, and allows guests to purchase limited edition merchandise, snacks, decorations, and special greetings with Duffy and Shellie May. You can see some of the details on Tokyo Disney Resort’s official website.

So what is there for Journeys with Duffy? Let’s take a look… 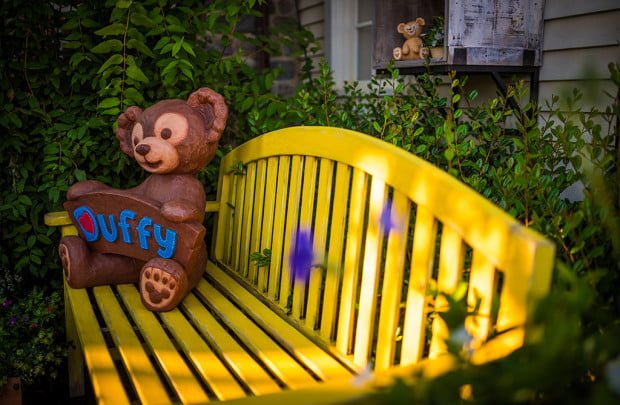 There are a lot of new photo ops around Cape Cod, including this Duffy on a bench; several times I passed it, there were short lines to sit here. 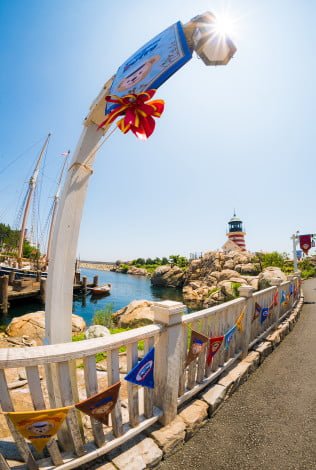 Pennant banners also run all along the fence in Cape Cod. 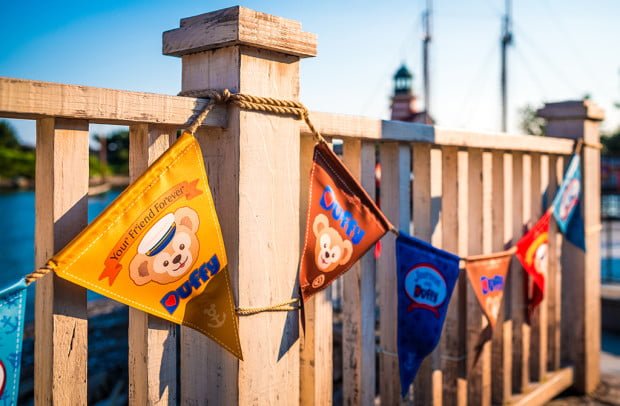 These banners are cute enough, but they are really vibrant as compared to the rest of Cape Cod. 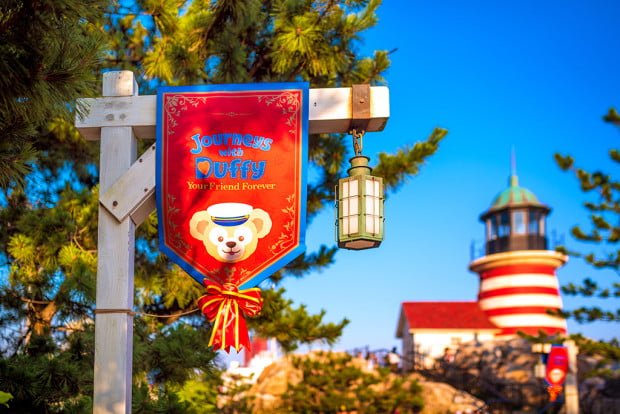 Likewise, there are banners hanging from all of the lampposts in Cape Cod. 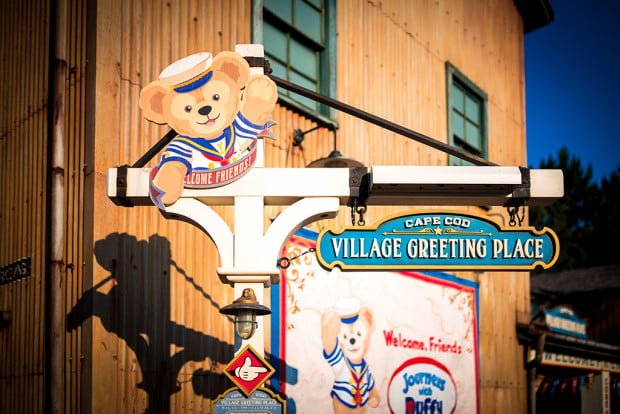 There’s also some decor over by the Village Greeting Place, where Duffy and Shellie May can be found in their special outfits. I wasn’t keen on the idea of waiting 45 minutes to meet Duffy, so I passed on this. Sorry? 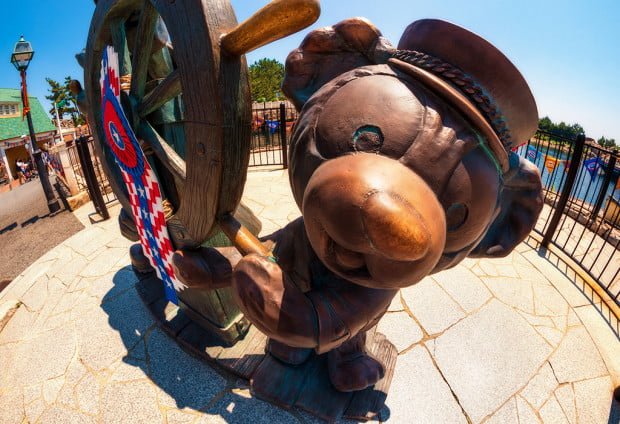 Duffy has been added to the Helmsman Mickey statue (the same statue found aboard Disney Cruise Line), and it is definitely the nicest of the decorations. 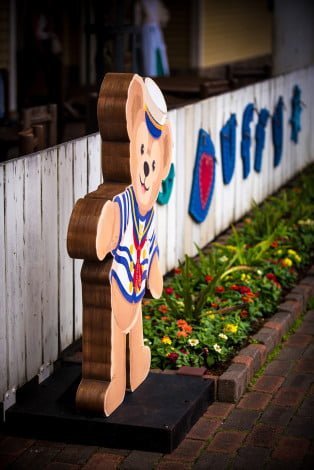 A Duffy cutout, with his name spelled out on the fence behind him. 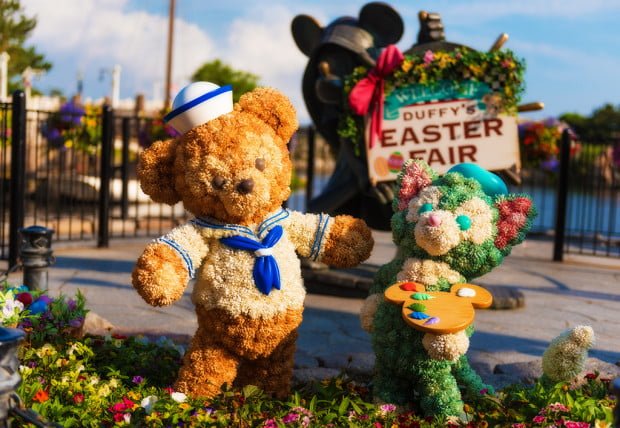 Cape Cod is one of my favorite parts of Tokyo DisneySea, and an area that I think has strong thematic charm, even despite Duffy having commandeered it as his hometown. I’m of two minds about these decorations. On the one hand, there are a ton of them, and they cartoonify an otherwise beautiful, realistic-looking land and make it look like an arts and crafts fair with mostly basic decorations.

On the other hand, Tokyo DisneySea is mostly a locals park, and I know the guests there really enjoy this type of thing. I always applaud the parks giving locals an incentive to return. Plus, even if the decorations don’t blend into the Cape Cod theming, they are in the style of Duffy. It’s not like this is the first time Tokyo DisneySea has done Duffy decorations in Cape Cod, either (see above photo from Easter). 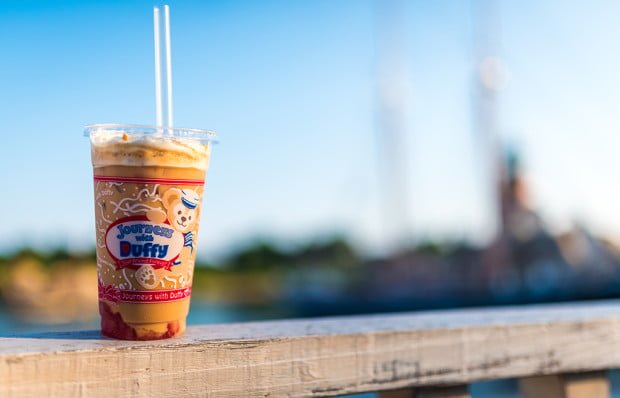 Of course, like any event at Tokyo Disney Resort, there are limited time foods to purchase. 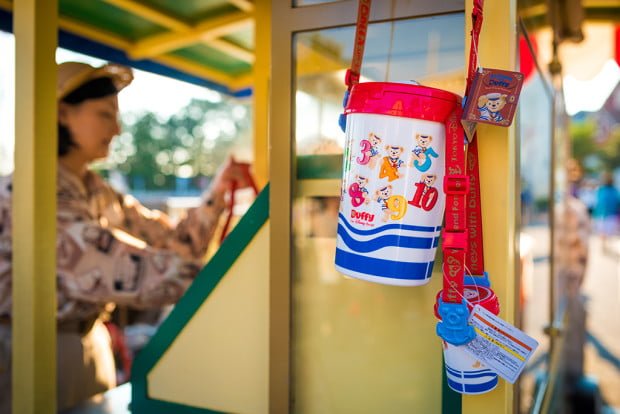 Not to mention a limited edition Duffy 10th Anniversary popcorn bucket. I’m sure this bad boy is fetching a pretty penny on eBay… 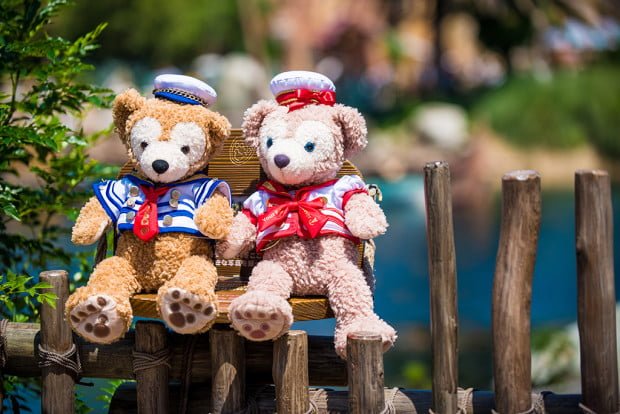 And, of course, limited edition Duffy outfits! I don’t remember the exact price on these, but I did a double-take. I wouldn’t be surprised if sales of Duffy merchandise are singlehandedly funding all of the other ambitious offerings at Tokyo Disneyland and Tokyo DisneySea.

Later in the year, some cool merchandise will be available, including a reissue of the best Duffy costumes ever (a fan vote was conducted to determine the best ones) and Duffy-fur Converse shoes. It may be too expensive for me, but at least a lot of this Duffy merchandise is ambitious and inventive. 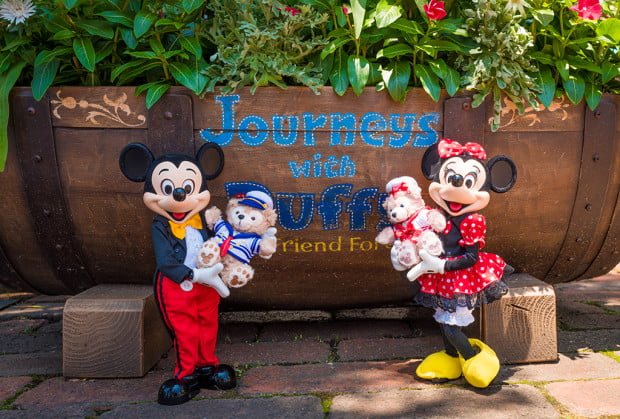 These Mickey and Minnie statues modeled after walk-around characters actually are pretty cool. Unfortunately, they are no longer sold (another guest let me photograph theirs), but you can own one for only a cool $1,000. What a steal! 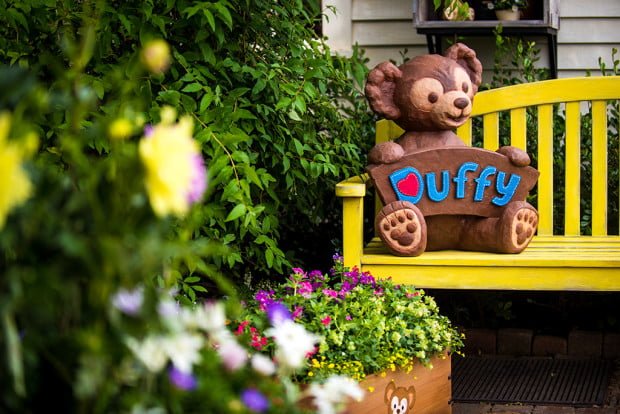 Overall, I’m not quite sure how to react to Journeys with Duffy. As someone who has seen Cape Cod in its “unblemished” state, it wasn’t a big deal to me to have all the decorations/clutter. I’d be disappointed if I were a first time guest who wasn’t a big Duffy fan, though. It’s also disappointing that the event is all about merchandise and has no real substance. Then again, it’s occurring simultaneous to other seasonal events that will have substance, so it’s understandable that it doesn’t really aspire for more. In a place where Duffy is a really, really big deal, it’s nice that they are honoring his 10th Anniversary, and the fact is, this could have been solely a merchandise event…so what was done was better than just that. I certainly wouldn’t recommend anyone make a trip solely to see Journeys with Duffy (again, unless big Duffy fans), but I guess it’s a cute little event that is ultimately harmless. 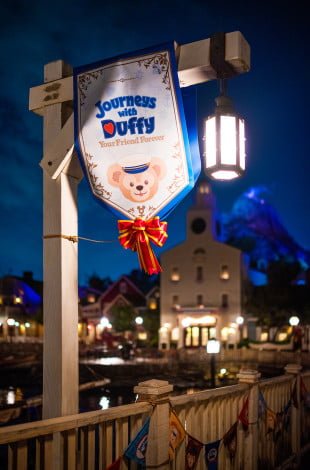 Does Journeys with Duffy at Tokyo DisneySea look interesting to you? Are you going to throw a party for Duffy’s 10th Anniversary? If you have any other comments or questions, post them below and I’ll try to answer!

4 Responses to “Journeys with Duffy”