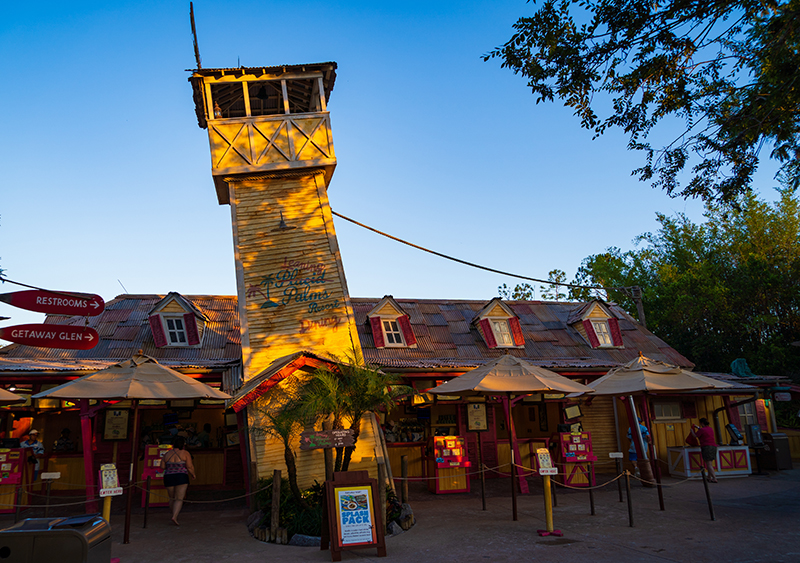 Leaning Palms is a counter service restaurant in Typhoon Lagoon water park at Walt Disney World. In this WDW dining review, we’ll share food photos, offer thoughts of the menu, how this quick service eatery compares to alternatives around Typhoon Lagoon, and share some backstory.

At Walt Disney World, the two water parks play second fiddle to the four theme parks. That might even be an overstatement–most guests simply don’t bother with Typhoon Lagoon or Blizzard Beach. As we’ve stressed countless times, we think this is a mistake. Nowhere at Walt Disney World does theme as well as the water parks. Turns out, Leaning Palms does food pretty well, too.

It’s been a while since we’ve covered Typhoon Lagoon on the blog (expect that to change soon), but our go-to post is our Guide to Disney’s Typhoon Lagoon Water Park. That covers background info, strategy, and answers other FAQ about this Walt Disney World water park.

We also have a Typhoon Lagoon Dining Guide, but that’s partially outdated. Basically, what you need to know is that Leaning Palms is the main–and our favorite–counter service restaurant at Typhoon Lagoon. Oh, and you should also know about the glorious Sand Pail (pictured below) and the Mini Donuts, the water park’s iconic snacks. 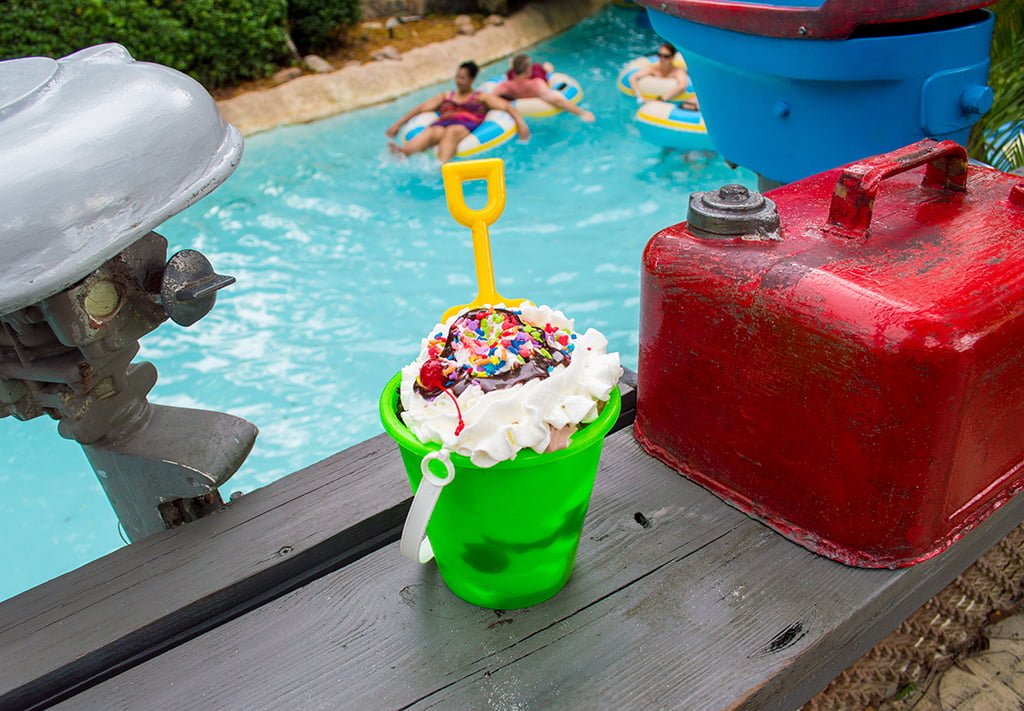 Upon entering the park, you start to see Typhoon Lagoon’s backstory unfold: a tin-roofed island village strewn with cargo, storm-battered buildings, surfboards shot through trees, and other wreckage left in the aftermath of a colossal storm. Per legend, “a furious storm roared ‘cross the sea, catching ships in its path, helpless to flee. Instead of a certain and watery doom, the winds swept them here to Typhoon Lagoon.”

The fabled typhoon irreversibly altered the small community, previously known as Placid Palms Resort. To add insult to injury, the typhoon triggered an earthquake and volcanic eruption. This is where Mount Mayday (which ‘erupts’ every 30 minutes) and the impaled Miss Tilly, an old shrimp boat out of Safen Sound, Florida, come into play. Those have nothing to do with Leaning Palms, but are nonetheless interesting components of Typhoon Lagoon’s backstory. 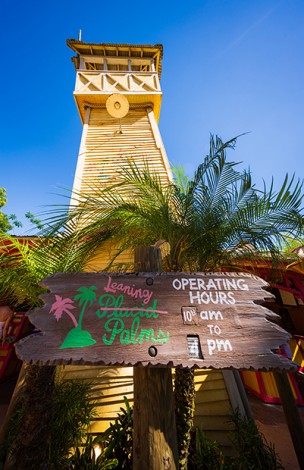 In the aftermath of these calamities, the island’s inhabitants made lemonade out of lemons, transforming Placid Palms Resort into Leaning Palms Resort. This is why what was the resort’s clubhouse and is now the restaurant and nearby palms are–quite literally–leaning. Around the Key West-style architecture of the resort’s clubhouse, locals rebuilt their community in a more ramshackle manner with the found objects that the storm delivered to their island.

Suffice to say, Typhoon Lagoon’s backstory is a clever one that is amply reinforced by what you see all around you in the water park. It’s logical, straightforward, and amusing–with nothing about it feeling forced. For that reason, Typhoon Lagoon has one of the best backstories at Walt Disney World, and Leaning Palms is at the heart of that story. 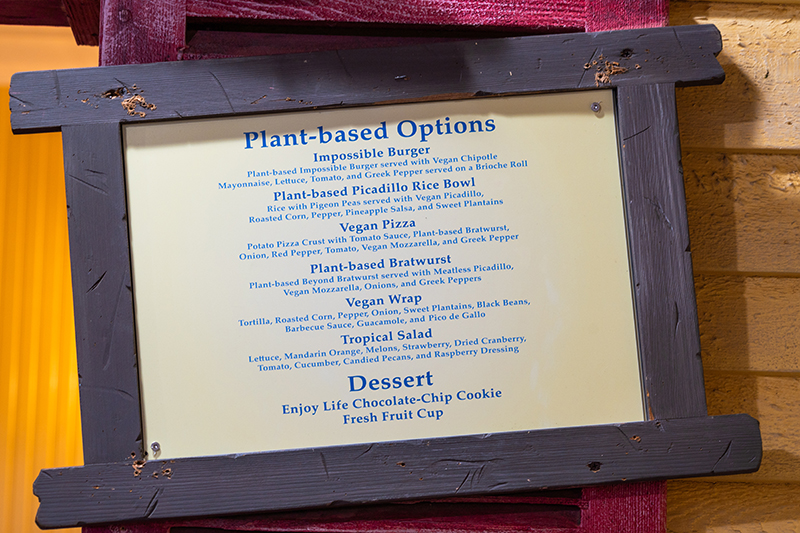 As for the food, Leaning Palms has recently seriously stepped up its game on the plant-based front. Above is a look at the vegetarian and vegan menu options; there are as many options here as there are on the regular menu!

To my knowledge, this is the most ambitious plant-based menu at any Walt Disney World counter service restaurant. Centertown Market’s new menu might give it a run, but suffice to say, I’m shocked to see this at a water park. 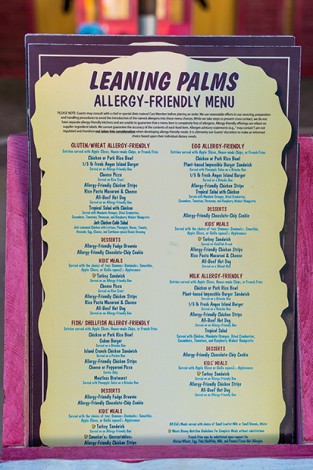 There’s also a rather expansive allergy-friendly menu. To be honest, I seldom peruse these at other Walt Disney World restaurants, so I’m not sure how this stacks up. To me, it seems like a lot, though.

In terms of seating, there are two covered picnic areas flanking each side of Leaning Palms. At prime lunch-time during peak season, these fill to capacity. If it’s a cloudy day, we prefer taking our food over to Happy Landings, the ice cream spot with seating that overlooks the lazy river. 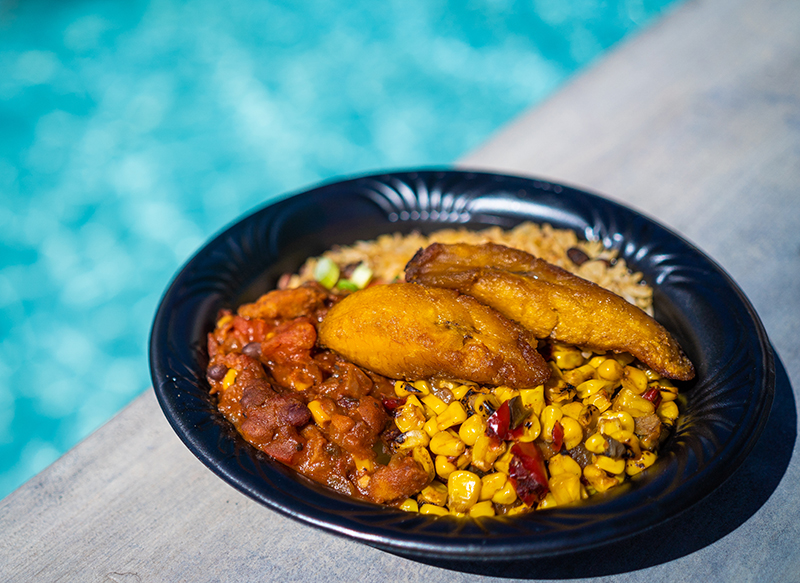 This was great. Fresh and refreshing, filling yet light, and offering a bit of a kick. It’s the perfect type of dish for a day at the water park when you don’t want something that’s going to feel like a lump in your stomach. Sarah thought it was a bit heavy-handed on the salt/seasoning, and I don’t necessarily disagree, but I was fine with it as-is.

It’s shockingly ambitious for a counter service water park meal–if it were in Magic Kingdom, it would rank as one of the park’s better counter service entrees. (So good that it made me wish I would’ve ordered the Jerk Chicken or Adobo Pork Rice Bowl. Next time.) 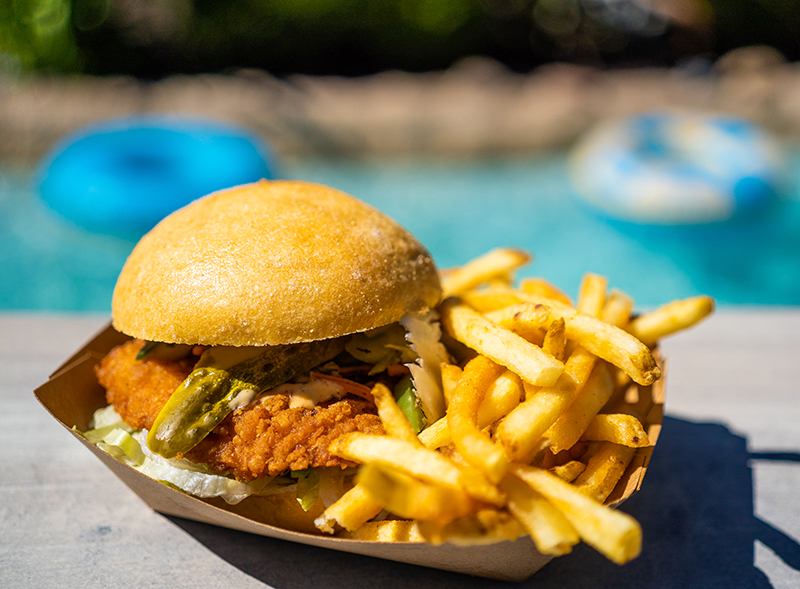 This was satisfying. The chicken was lightly breaded and flavorful, with the dressing, vegetables, pickles providing a bit of texture and punch. In the landscape of Walt Disney World dining, this is about middle of the pack, but it’s another ‘better than expected for a water park’ dish. 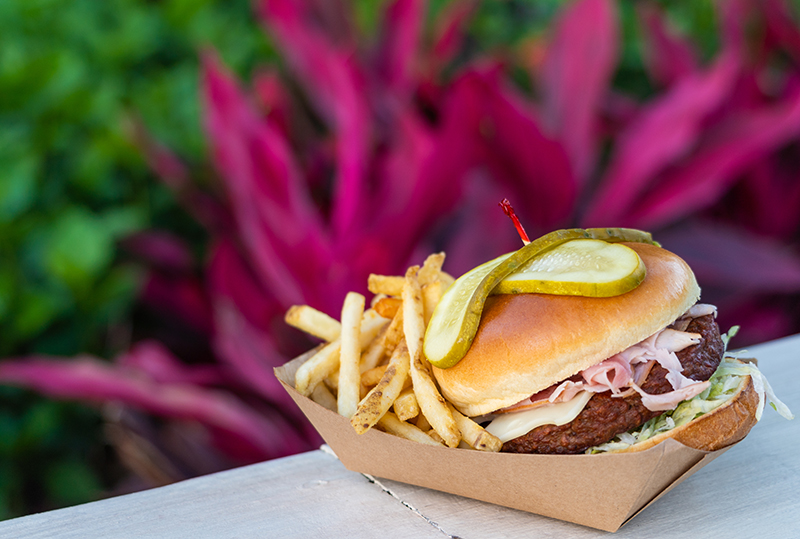 For our final item, we thought we’d get clever and order the Cuban Burger (normally “Beef Patty served with Pickles, Ham, Swiss and Shredded Lettuce on a Brioche Bun served with French Fries and Coleslaw”) but with an Impossible Burger patty.

The Cast Member at the register was happy to accommodate this request, although I think those inside the restaurant might’ve been a bit perplexed at why we wanted a plant-based patty on a burger that would still have meat. In any case, I’m not sure whether what we received was a beef patty or Impossible Burger.

It was overcooked to the point that it had little flavor, juiciness, or any of the hallmarks of a normal burger, Impossible or otherwise. Despite this, the ham and cheese were both fresh from the fridge, making for an end result that didn’t come together in any way, and ended up being the most disappointing burger we’ve had at Walt Disney World in a while. We probably got a bit unlucky with this, but I can’t imagine it’d be markedly better even if perfectly prepared.

Overall, we’ve long been fans of Leaning Palms, both for its theme and its menu. In the past, I’ve really enjoyed the monster deli sandwiches and other straightforward options. Now, Leaning Palms has entered a new “era” of ambitiousness, especially on the rice bowl and plant-based front. While other items are good, those rice bowls are absolutely the stars of the menu. I’m eager to try the other varieties when we return to Typhoon Lagoon.

Have you tried the new menu at Leaning Palms? Any standout items for you? Do you agree or disagree with our review? Any questions we can help you answer? Hearing your feedback–even when you disagree with us–is both interesting to us and helpful to other readers, so please share your thoughts below in the comments!