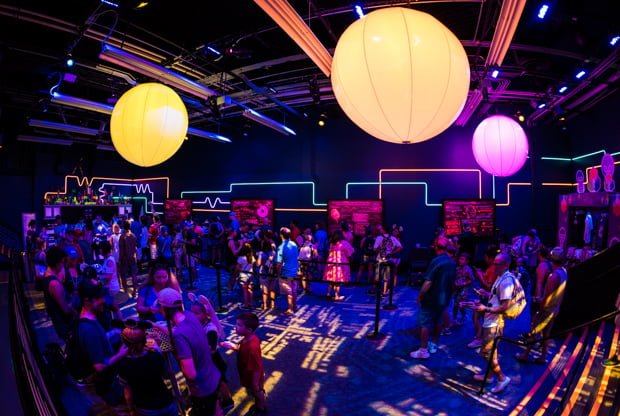 New to the 2017 Epcot International Food & Wine Festival is Light Lab, an indoor and air-conditioned marketplace booth that has opened in Innoventions. In this post, we’ll share photos of this new booth (it’s really a lot more than that) and its food, and thoughts about it.

The menu is fairly sparse at Light Lab, with only three drinks and a single food item. Fortunately, it’s a glow in the dark doughnut, so that’s a potentially huge redeeming point. The drinks are all presented as various types of experiments, and tie into the ‘show’ that’s going inside Light Lab. Oh, and did I mention the air conditioning?!

Thematically, Light Lab is really interesting. It’s like the strange love child of Electric Umbrella and Innoventions, with a liberal application of black light. It feels distinctly like Epcot ’94, which might not be construed as particularly high praise, but it is here…

While Epcot ’94 can be seen as the beginning of the end for the beloved aspects of EPCOT Center, it did have some high notes, and I think many people have come to have a certain fondness for that distinctly 1990s aesthetic. Or, maybe not.

Personally, I think it works well here, particularly since this is a temporary offering. Light Lab looks and feels fun and, more importantly, it has a cooling sense about it. And that’s not just the AC. (I know I keep mentioning the air conditioning, but I really can’t stress this point too much given the current weather.) I guess whether the style works for you is a matter of taste. 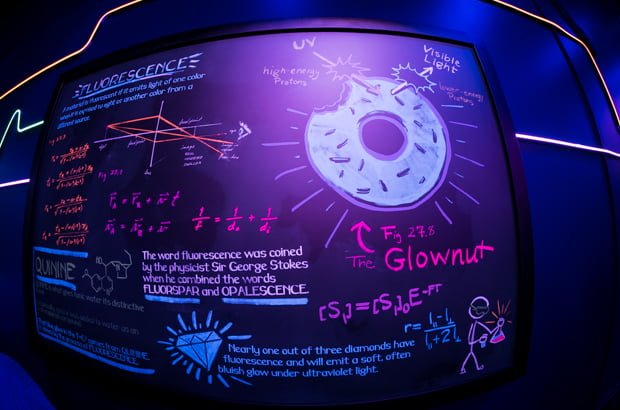 As you can probably surmise from all of the glowing test tubes and beakers…and name of the booth itself, this is a lab where scientists are experimenting with light.

The scientist Cast Members themselves don’t really put on much of a show–but the touch in terms of presentation is still neat, and it’s still interesting to watch them make the drinks. 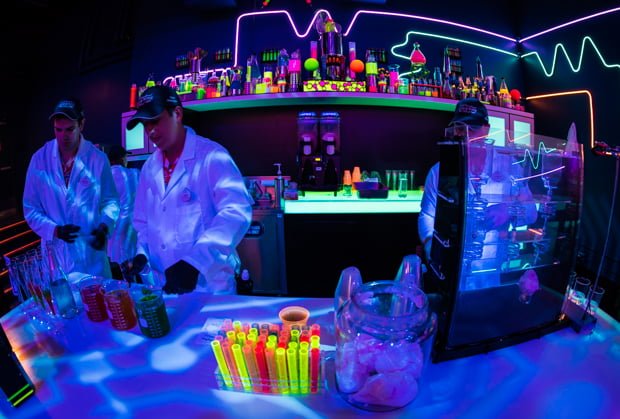 The premise is that they are working to meld light and taste in an effort to unify the senses and create an extra-sensory culinary experience. Obviously, a glowing doughnut is the natural conduit for such lofty aspirations. 😉

Yesterday, I decided to rope drop this booth, figuring I could show up shortly before it opened to be the first inside for photos of the booth without anyone in it. Hah! 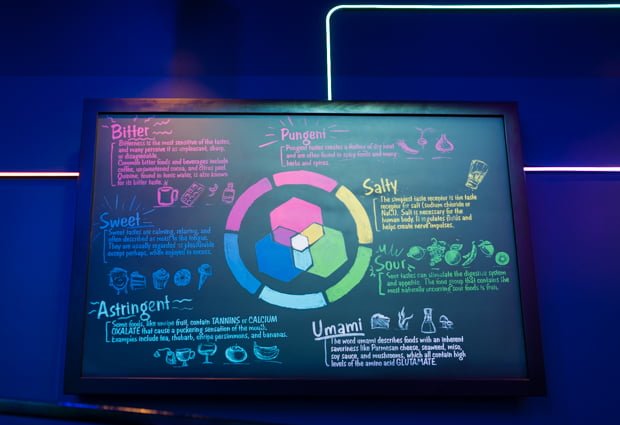 Ten minutes before it opened, there was already a huge line outside, just to get in. I was so far back that I wasn’t even in the first group of people admitted. Apparently, this booth was so popular (and capacity so limited) that its contents were being sold at another kiosk in Innoventions without the ‘show’ element.

Once I got past the line to get inside, I found another long-ish line inside. The wait this time was around maybe 15 minutes from the time I ordered until picking up my food. Given that it was inside in the (wait for it) air conditioning, I wasn’t too worked up over this. 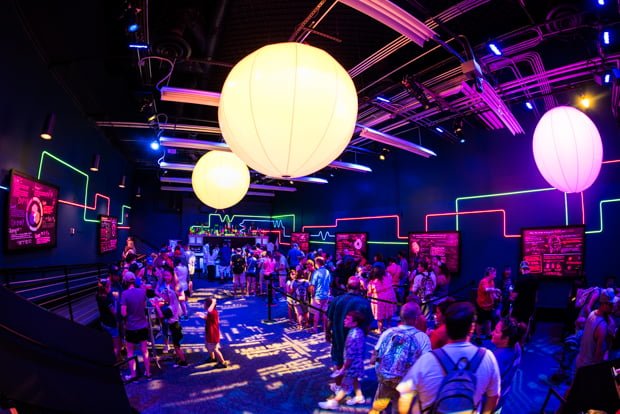 I checked back a couple of times, once before noon and once in late afternoon to see if perhaps I was part of an opening rush. Both times, the lines were significantly worse. I’d hazard a guess that the average wait to get in later in the day was around 30 minutes. Then again, the line for Spaceship Earth was 55 minutes much of the day–it was an incredibly busy day all around at Epcot, and not necessarily representative of what you’ll encounter on a weekday later this month.

Alright, with that, let’s turn to the menu and our thoughts of each item… 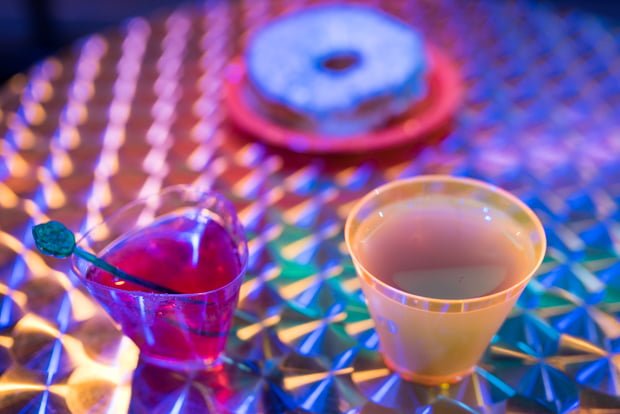 RGB: Citrus Apple Freeze (non-alcoholic) – I’m not sure what this was supposed to taste like, but it wasn’t citrus or apple. If anything, it was somewhat like incredibly watered down cough syrup with a pound of sugar added. I rarely throw things away, but I threw away half of this. Disgusting. 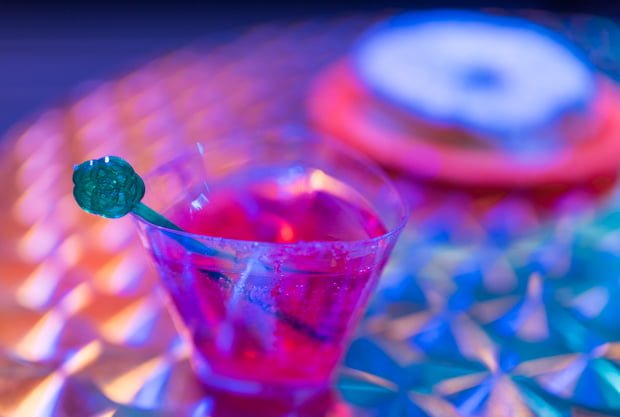 T=C2: Tonic Water and Cotton Candy (non-alcoholic) – Taste-wise, this was a step up from RGB, but that was the only direction to go. The ‘experiment’ component of this was neat, but the actual drink itself was bad and didn’t have much flavor aside from (again) sugar. Both of these drinks are so liberal with the sugar that even the Kool-Aid Man would say, “yikes, maybe tone it down a bit.”

Not realizing there was sugar all over the outside of my cup, I ended up getting my camera all sticky as a result. Cool.

Bleu Spectrum: Blanc de Bleu Cuvée Mousseux with Boba Pearls – The other drinks were so bad that we’ve decided we aren’t going to go back for this. Sorry? 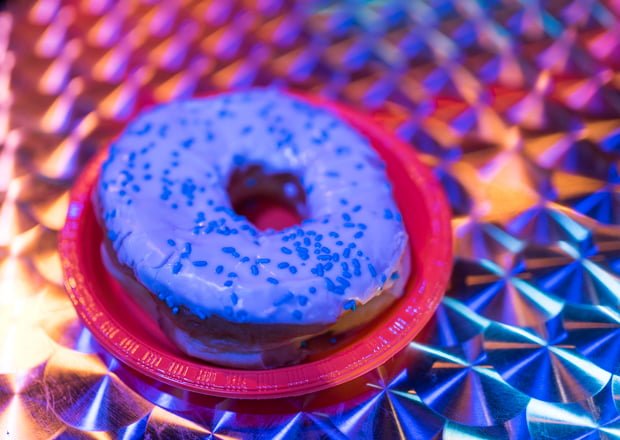 The Glownut – I’ll level with you…even as much as I enjoy doughnuts as a guilty pleasure, this is about the most uninspired item you can get from the Epcot Food & Wine Festival. It’s literally just a plain doughnut from one of the Joffrey’s carts.

I feel like the “limited time” part of this offering (indicated on the sign) is based upon when the Joffrey’s stands have leftover day-old donuts. It doesn’t even glow or anything–that’s just what blue looks like under the lighting in the room.

Now, the upside is the value-for-money. At only $3 for a large, shareable doughnut, this will take up some real estate in your stomach so you don’t drop $137 per person at the marketplace booths. From that angle, you should get one for everyone in your party–don’t share it. How is that for positive spin?!

In addition to these items, Light Lab is one of the venues at the 2017 Epcot International Food & Wine Festival that has a pretty expansive beer menu. Here’s what you can find there:

Overall, we thought Light Lab was pretty cool to look at…and that’s all I’d do here, unless you’re going to order a beer or something they can’t ‘experiment’ on with sugar. Unfortunately, the menu here is truly the worst in all of Food & Wine Festival, so unless you were otherwise going to toss your money on the ground, don’t order this stuff. I’m all for glowing foods, so I wish the menu were a bit more ambitious in that regard. As far as the environment goes, this is probably the most elaborate Epcot Food & Wine Festival booth we’ve ever seen, and the fact that there’s a lot of visual interest…plus air conditioning…adds to the experience. Hopefully, this booth is iterated on and improved for next year; conceptually, it’s a good idea.

Do you have any favorites from the Light Lab marketplace booth? Anything you’re excited to try? Any questions we can help you answer? Hearing feedback about your experiences is both interesting to us and helpful to other readers, so please share your thoughts below in the comments!