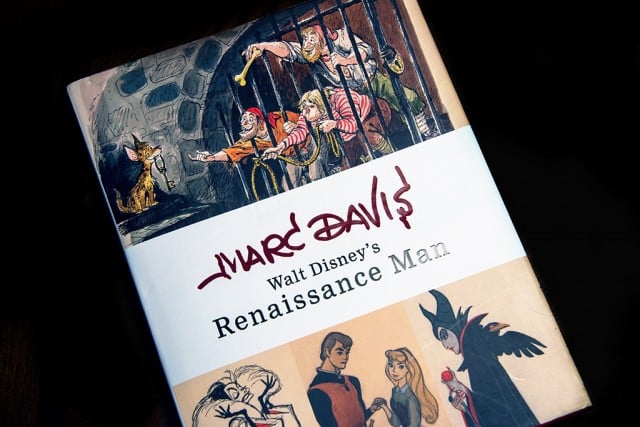 Marc Davis: Walt Disney’s Renaissance Man is a new coffee table book concerning the legendary Imagineer who created memorable characters in the theme parks and in Disney animated classics. As is implied from the title of the book calling him a renaissance man, Marc Davis had a long and varied career with Disney. He created iconic Disney characters, such as Cinderella, Alice, Tinker Bell, Maleficent, and Cruella De Vil for the animation studios before transferring to Imagineering. There, he worked on Disneyland and 1964-65 New York World’s Fair attractions including Jungle Cruise, Pirates of the Caribbean, Country Bear Jamboree, Carousel of Progress, and Haunted Mansion. Despite being one of Walt Disney’s Nine Old Men, this is the first major release devoted to the career of Marc Davis.

If you are looking for a comprehensive biography of Marc Davis, you will be sorely disappointed by Marc Davis: Walt Disney’s Renaissance Man. Each chapter only has 2-3 pages of text, and it’s all rather cursory. This is a coffee table book through and through, and while each chapter begins with an anecdote from someone notable, even in sum they present little more than an overview of his professional life.

Despite this, the book is still effective. Most of the anecdotes share enough to get a feel for Marc Davis’ personality, with the best coming from people who knew Marc personally. Some of the anecdotes are from respected individuals (like Pete Docter) in animation or Imagineering who didn’t know him personally, but appreciate his work. These contributors offer their gravitas in reaffirming the notion that Marc Davis was incredibly talented, but they do little to tell his story. I wouldn’t mind these sections so much were there more of substance about Marc in the rest of the book. 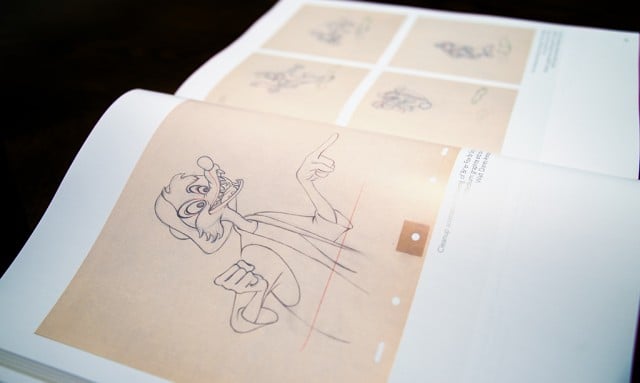 Even where the text fails, the illustrations succeed. Most of these come from the pages of Marc Davis’ sketchbooks or concept art found in Disney research libraries or archives, and they alone say a lot about the man. The decision to include a variety of different types of images spanning the breadth of Davis’ career was a great one, and these images in their totality speak volumes about Davis. 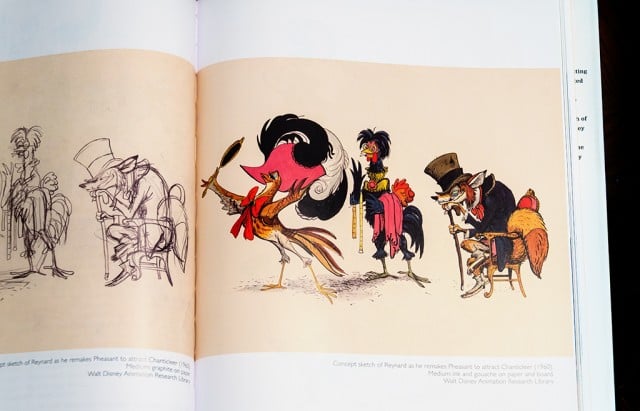 These drawings are what make the book a winner for me. I feel like I’ve learned more about Marc Davis from hearing his wife, Alice Davis, Marty Sklar, and others speak at various D23 events, but the art in this book is so brilliant and wonderfully curated that I can completely forgive the relative superficiality of the text.

These images make it a great coffee table book, and one that I’ve already flipped through a number of times just to revisit some of my favorite drawings. Normal, text-heavy biographies are a one-and-done for me, so the decision to focus on the art and let the text take a backseat was likely a good one. As Davis was an artist, letting the art do the talking does make sense. 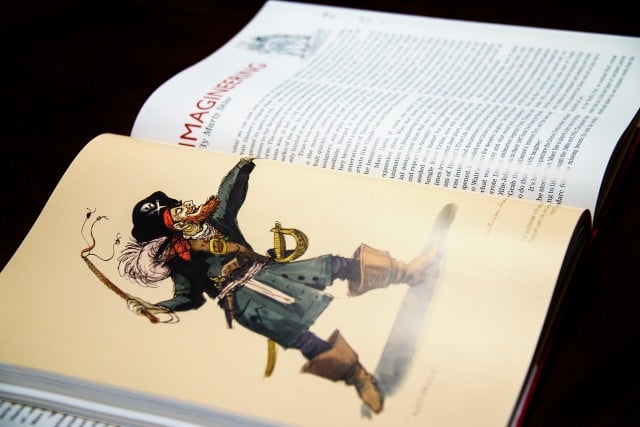 While his drawings for Disney animated films are interesting and show a deft draftsman (and make me really wish Disney would have made Chanticleer!), it’s Marc Davis’ work for Disneyland and Walt Disney World that really interests me. Being primarily a Disney Parks fan, I was a little nervous when I picked up the book and saw that only one chapter was devoted to his career in Imagineering. I was relived to find that this chapter is the longest in the book, and sketches from Davis’ days at WED/WDI are sprinkled throughout the other chapters as well. 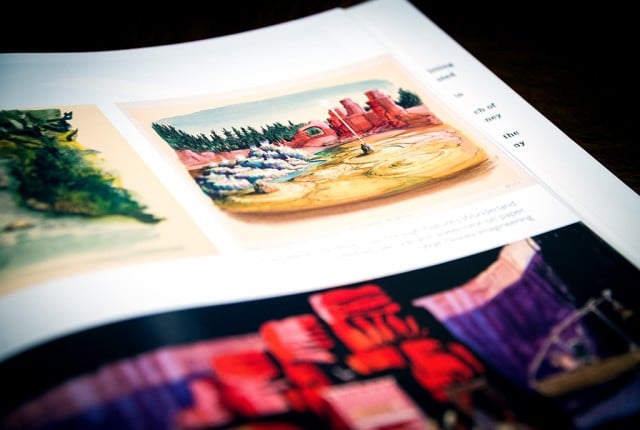 This section includes a lot of art from the flagship attractions Marc Davis worked on, such as Pirates of the Caribbean, Haunted Mansion, and ‘it’s a small world’, but it also includes rarely-seen art from Western River Expedition, Mine Train Through Nature’s Wonderland, and America Sings. The art from Carousel of Progress included many sketches I had never seen, and virtually everything in this chapter put a smile on my face or made me chuckle. There’s really no doubt that Davis had a knack infusing humor, personality and clever gags in his characters.

The text here is by Marty Sklar, and is a real letdown. It reads like a bland and generic Wiki-entry about Davis’ time at Imagineering. This is especially disappointing in this case because Sklar actually knew Marc Davis, and I’ve heard him share interesting stories about Davis. 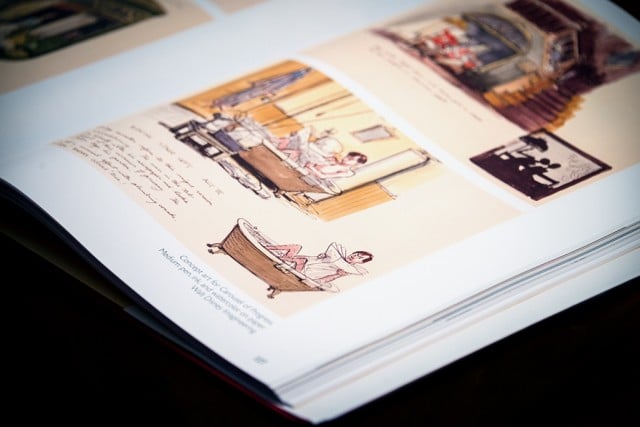 I was also disappointed to see no art from Country Bear Jamboree in the book, as I consider this to be one of Marc Davis’ career highlights. In fact, it seemed like a lot of notable Marc Davis art was absent, and even though Imagineering is the longest chapter in the book, it doesn’t feel like appropriate depth was given to his career at WED. I’ve seen a lot of great Marc Davis art at various D23 events and in various corners of the interwebs, much of which is absent from this book.

I know Davis had an illustrious career and not everything he did can be included, but if I were editing, I would have included more from the parks. In fairness, I was happy to see a page of art for the Enchanted Snow Palace (an attraction based on The Snow Queen, which is the fairy tale from which Frozen was adapted), an unbuilt attraction that was recently highlighted at D23’s Destination D. A bit of an aside, but I really hope some of Davis’ ideas for this attraction are incorporated into the upcoming Frozen attractions in Epcot and Tokyo DisneySea. 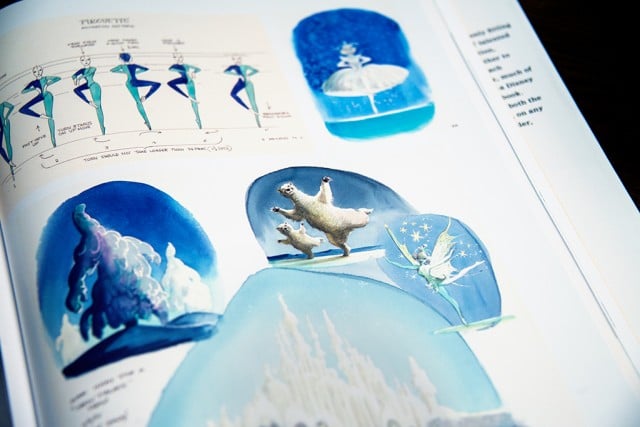 Aside for the Imagineering chapter, for me, the chapter “Anatomy of Motion” was particularly interesting. Written by Marc Davis in a dry, textbook-like tone, it’s not “interesting” in the traditional sense of the word, at least for a non-artist. Rather, it is interesting because it presents a side of Davis that was unexpected for me. Perhaps due to the jovial and comical style of his characters and caricatures, I have taken for granted the insight and knowledge Davis possessed of the human anatomy. It’s not that I thought his depictions of people were all happy accidents, but I just never thought about it.

It’s sort of like the comedian whose work is not only funny, but also biting social commentary–it should come as no surprise that they are intelligent and knowledgeable of the issues of the day, but it may not be something you had thought of previously. In any case, Davis writes authoritatively on human anatomy in this chapter with sketches to illustrate his points. This section of the book really underscores how and why Davis’ work succeeds as well as it does.

Beyond that, there’s a lot to learn about Marc Davis from the other chapters. It was refreshing to see this Disney Editions-published title gave more than just a passing acknowledgement to Davis’ non-Disney art, and some of his literary pieces of fine art are among my favorites in the book. His Oceanic Art is likewise particularly stunning, and I can only hope that the refurbished Polynesian Village Resort will utilize some of this art as a way to pay homage to this Disney Legend. The final chapter on Alice Davis (I can only hope she receives her own biography one day) is a perfect conclusion to the book, as it gives insight into Marc as a man, and the relationship he and Alice shared.

Overall, I have mixed feelings about Marc Davis: Walt Disney’s Renaissance Man. I think it was absolutely the right decision to make the images the star of the show here, with text being secondary. I also think the arrangement of the chapters of the book and focus on more than just the obvious highlights was a really wise decision that helped to tell the story of Marc Davis. The art that was curated for the title is mostly stunning, even if there are some notable omissions and is lighter on this art than I would have hoped. I still can’t help but wish that the limited text present was a little more poignant in telling personal stories of Marc Davis that helped humanize him. As a coffee table book featuring art from one of the most legendary Imagineers of all-time, I highly recommend it. Even if it’s not perfect, it is the best book we have on Marc Davis.

If you’re into books covering the Disney theme parks, check out my Disney Parks Book Library post, which covers (some of) my growing library. Be warned, once you start collecting these books, it’s tough to stop…even when you run out of shelf space!

Have you purchased your copy of this book? Does the book interest you? Are you a Marc Davis fan? Share your thoughts or any questions you have in the comments below!