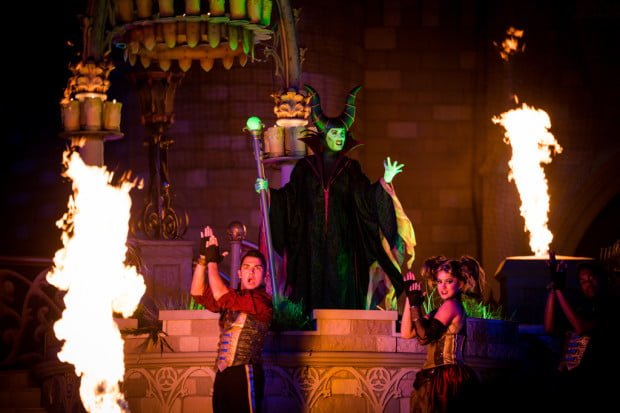 Our night ended with the new Hocus Pocus Villain Spelltacular, and I wish we had seen this earlier in the evening…and that’s totally not because watching it so late gave me nightmares. Rather, because the show was so good I would’ve liked to watch it more than once.

I’ll admit that I have never seen the source film (I was about to follow this with, “as I’m sure most people haven’t” until I saw that it’s currently the #1 bestseller for family DVDs on Amazon. Whaaa?!). Sarah loves it, having watched it every year when she was a kid. Regardless of it being a bestseller now (that probably has more to do with price than anything else), I still don’t think this is a super hot property. It seems like a cult favorite that has gained popularity since its original release.

Assuming that’s correct, I say huge kudos to Disney on basing a show around it. Many Disney fans complain about Frozen being about as ubiquitous as DraftKings commercials on Sundays, so I think praise is appropriate when Disney goes the other direction and gambles on basing something on a property that isn’t such a “sure thing.” I only hope the popularity of this show causes Disney to realize that source material is irrelevant if quality is there.

In terms of the show, oh my, is quality there. From the production value to the script to the caliber of the performers, the show is top notch. I was never a huge fan of Villains Mix & Mingle–I didn’t dislike it, I just could take or leave it–and I’d say this show is a substantial improvement in terms of overall quality and storytelling. 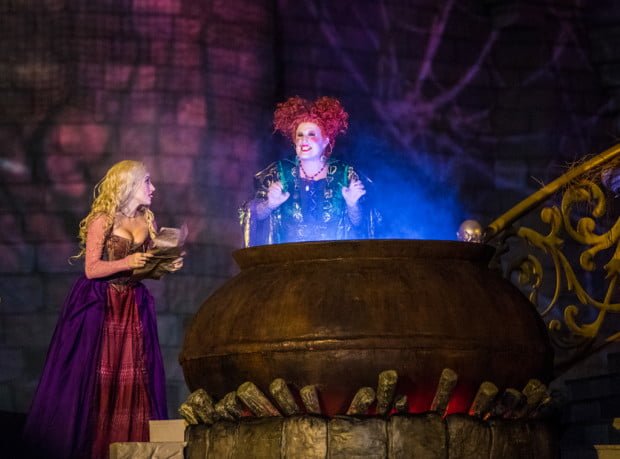 This isn’t to say that the plot is particularly complex or compelling–it’s basically just a glorified MacGuffin used to get all of the villains out there–but it works well enough to string all of the characters and musical numbers together. The performances by the villains are top notch (with the best beingincluding Dr. Facilier, Oogie Boogie, and Maleficent, in my opinion), as are the background dancers, and they give the show a nefarious vibe that’s countered by the comedic stylings of the Sanderson sisters. Flat out, the show just works, and is enjoyable for adults as well as kids.

I wouldn’t call the show risque, or anything remotely close to it, but it pushes the envelope in a park where Stitch is the scariest alien you can have with a bit of cleavage and a sometimes ominous atmosphere. In fact, the Oogie Boogie segment reminded me ever-so-slightly of Oogie Boogie’s Freaky Funhouse at last year’s one-off Villains Unleashed event, except much, much tamer. 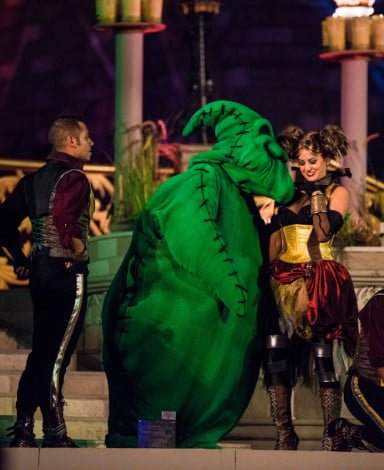 As I said above, this show is proof that if you build it, they will come. In this case, I’d say the combination of high quality, something with cult appeal, and it being the first substantial new offering at Mickey’s Not So Scary Halloween Party in probably a decade result in this show drawing some huge crowds. We’ve heard that this show has been consistently packed at each of the parties, but we were shocked to see people packed in past the Partners statue for the midnight showing. This show is clearly a smash hit, and far more popular than its predecessor. 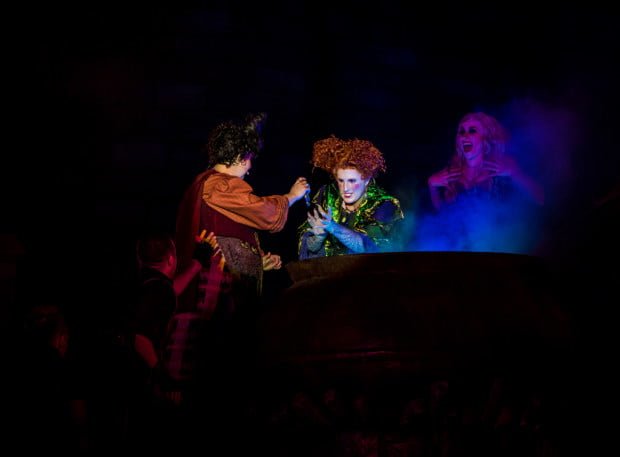 If getting a good spot for Hocus Pocus Villain Spelltacular is important to you, plan on camping out for it. My tentative recommendation would be claiming a spot for the first show before the party starts, but this only works if you don’t care about the rare characters. If you don’t want to skip those characters, it’s either the midnight showing for the lowest crowds, or staking out another showing if your kids (or you!) can’t stay up that late.

On the previous page, I bemoaned the fact that people leave the party so early; now, I’m going to seemingly contradict myself in the name of self interest, and complain that those of you with kids watching this last show are being irresponsible parents. 😉 Actually, this last show seemed mostly filled with adults–probably members of whatever cult has made this a classic. The bad thing about going for only the midnight show is that you don’t have the option of watching it again if you really enjoy it–I know I wish I had the chance to see it again. 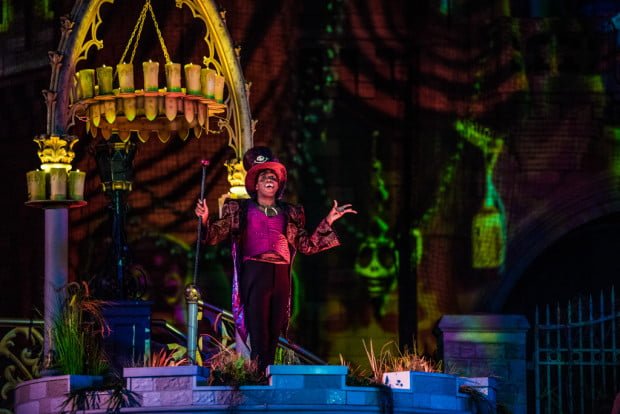 As mentioned, the show we watched started at midnight, which effectively extended the party by 20 minutes, and I still felt like we didn’t do a whole lot. (A recurring trend for this trip.) In reviewing our reports from previous Mickey’s Not So Scary Halloween Parties, we have done a ton more at previous parties.

In fairness, I can’t really complain. We had great views for each of the parades and the fireworks, and those are the things that matter the most to me. However, we didn’t need to wait nearly as long as we did for any of those things as we did. Few things irk me more than when I get in a long line for something, and no one gets in line behind me for like 10 minutes (conversely, it’s a major coup when I get in a short line, and then tons of people line up behind me.) I usually pride myself in picking just the right time to show up for a spot so as to not wait too long before the rest of the crowd shows up, but that was not the case for the first parade or the fireworks. 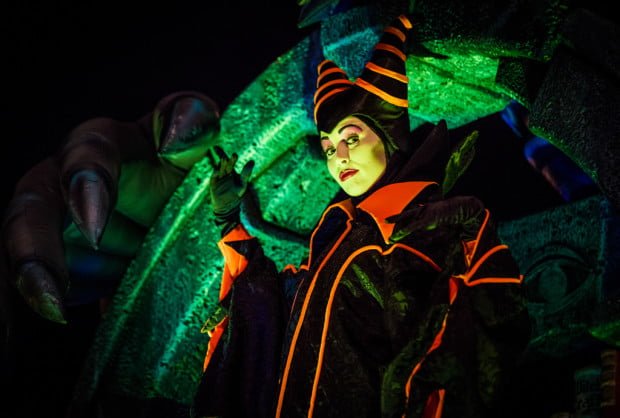 In both cases, we wasted at least 30 minutes camping out for spots that weren’t about to be claimed. Total, it might have been more like 75 minutes of wasted time. This may not seem like a ton, but considering that the party only lasts 5 hours, that wasted time, plus actual “valid” time spent camping out, plus the time spent watching both parades and the fireworks ends up taking the bulk of the party.

Next time, I think I’ll go back to my strategy of swooping into a spot for the first Boo to You Parade at the very last minute, hoping for the best, and then staking out my favorite spot for the second parade ~30 minutes in advance. If I don’t get a great photo spot for the first parade, oh well, having a decent view is good enough. 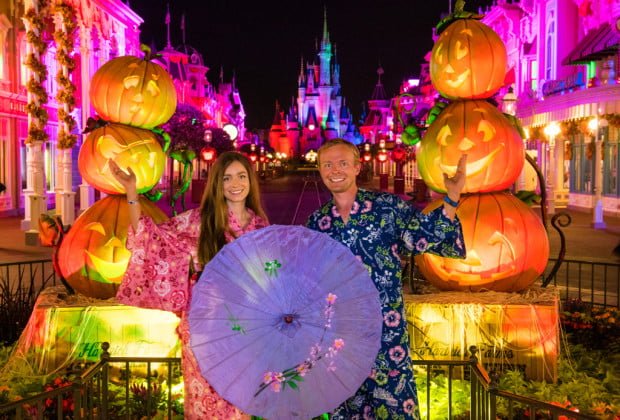 I know this probably all seems trivial in light of the fact that we got great parade and fireworks spots and saw all of the characters we wanted to see, but my favorite aspect of these parties is just walking around the Magic Kingdom taking in the ambiance, and we never stepped foot in Adventureland, Frontierland, or Tomorrowland during the entire party. Even if we don’t technically do a lot at the party, I far prefer wandering around enjoying ambiance to sitting or standing around, waiting.

There really is so much to see and do at these parties that it seems (to me at least) wasteful to spend so much time waiting. I’ve long advised people to totally skip trick or treating and attractions because there are better uses of the limited time at the Halloween Party, and it’s impossible to see and do everything. While waiting–to some degree–is a necessary aspect of the party, you don’t want to overdo it on waiting, either. In most cases, good spots and 30 minutes less time camping out is better than great spots and more waiting.

Post-closing was a bit of redemption in terms of enjoying that ambiance, as we stayed until the bitter end and were the last guests out of the park. One of my biggest personal grievances about these parties is the new “dance crews” that have been added in the last few years as pre-parade entertainment. I call this a “personal” grievance because I’m sure kids love them, and it’s hard to complain about an addition to the party, but I personally don’t like it because I used to love waiting for the parade and enjoying the moody lighting and background music on Main Street. Now, the best time to enjoy this is after the park closes, when it’s devoid of other guests and particularly spooky.

Overall, we are both definitely glad we did Mickey’s Not So Scary Halloween Party this year. Minor complaints aside, the new Hocus Pocus Villain Spelltacular makes this the best Halloween Party in years. Even as Annual Passholders, the party is worth the money for us. The ambiance, fireworks, and parade alone have justified the cost for us, with everything else being icing on the cake. Obviously, everyone has a different budget (and party size) so whether it’s worth it for you is a personal decision, but we highly recommend doing it at least once if resources allow. There’s enough to do to fill the 5 hours of the party–and then some–and it’s a ton of fun.

For overviews of all of these topics and so much more, the best place to start is our comprehensive Walt Disney World Trip Planning Guide to make the most of your experience!

Have you attended this year’s Mickey’s Not So Scary Halloween Party at Walt Disney World? What did you think? Thoughts on the new Hocus Pocus Villain Spelltacular show? Any other tips, likes or dislikes? If you have any questions or thoughts to share, please post them in the comments. We love hearing from readers!