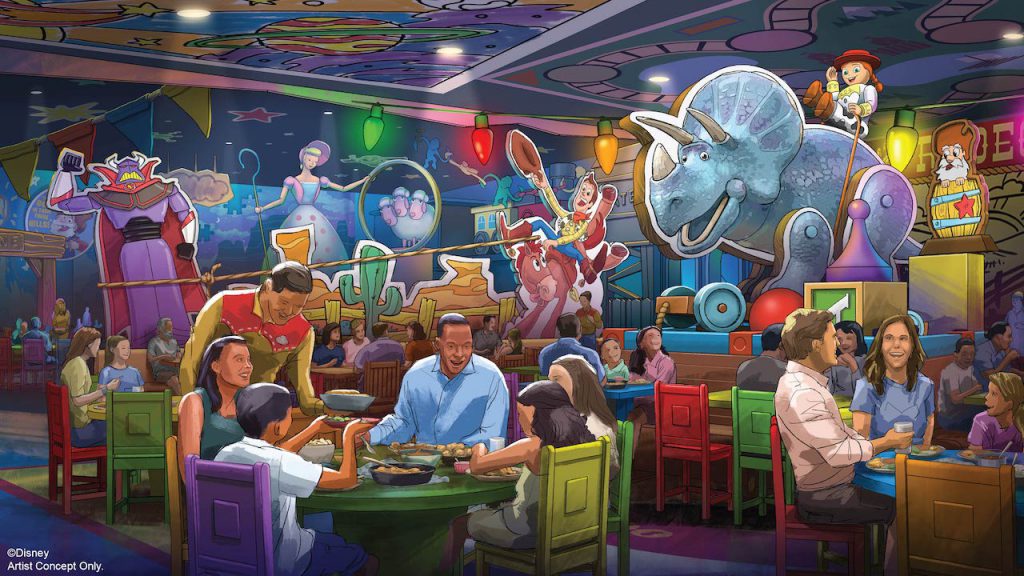 Toy Story Roundup Rodeo BBQ Restaurant will be themed to a backyard barbecue with Andy and his toys inviting guests to participate in fun. By toys, we do not mean the walk-around variety; Walt Disney World has indicated this will not be a character dining experience. As you can see in the above image, the art style is similar to that of both Toy Story Mania and Slinky Dog Dash.

The premise for Roundup Rodeo BBQ Restaurant is that Andy has cut and taped three cardboard boxes together to create a new rodeo arena using some of his favorite toys, games, and play sets. While some pieces are definitely western-themed, what makes this rodeo special is the broad assortment of toys that have been brought together to create a fun, colorful mashup-atmosphere.

This new dining option will be located to the right of what’s currently the entrance of Toy Story Land, behind the giant Woody figure and land’s marquee (you can see construction walls in the photo below). Previously, this area was home to two backstage production bungalows. These facilities were relocated with a new structure built to house Roundup Rodeo BBQ Restaurant. 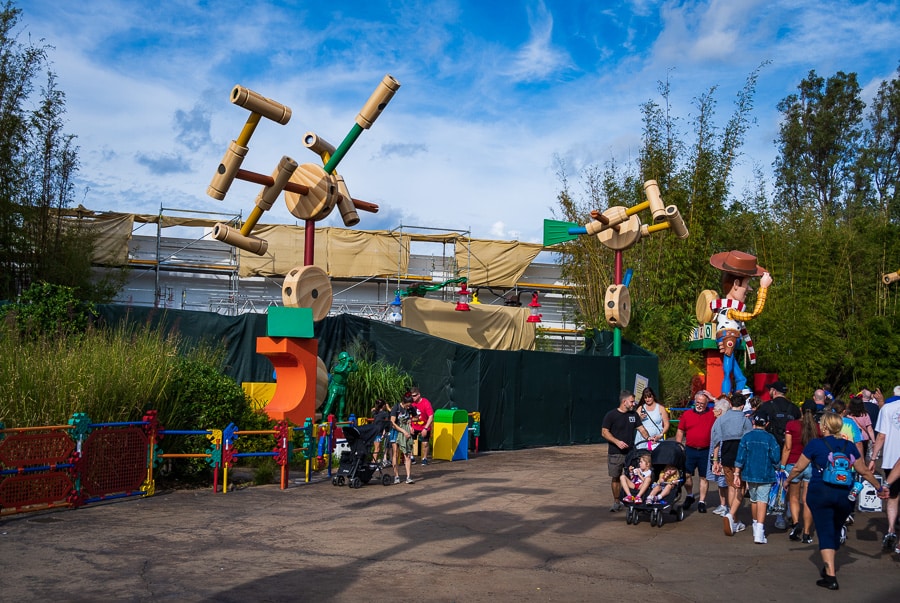 December 8, 2022 Update: Walt Disney Imagineering has started working on the exterior facade of the restaurant. We’re starting to see visible signs of this, as the restaurant marquee and other details have been installed of the exterior of the building, which is now behind construction scrims.

Before you get too excited, the ‘process’ of working on the entry courtyard actually began at the end of summer and only now are finishing details starting to appear on the outside of the restaurant. Like everything else about Toy Story Roundup Rodeo BBQ Restaurant, it has been a drawn out process–which is likely by design. 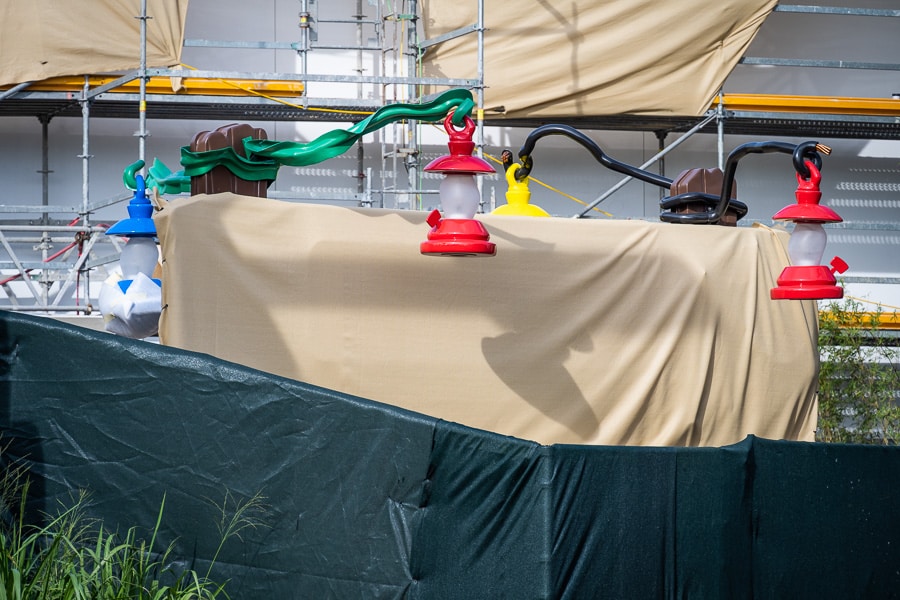 A last minute Christmas or Festivus miracle (for those who celebrate) is always a possibility, but we highly doubt it. Accordingly, we’ve also updated the section below with predicted opening dates for Toy Story Roundup Rodeo BBQ Restaurant. 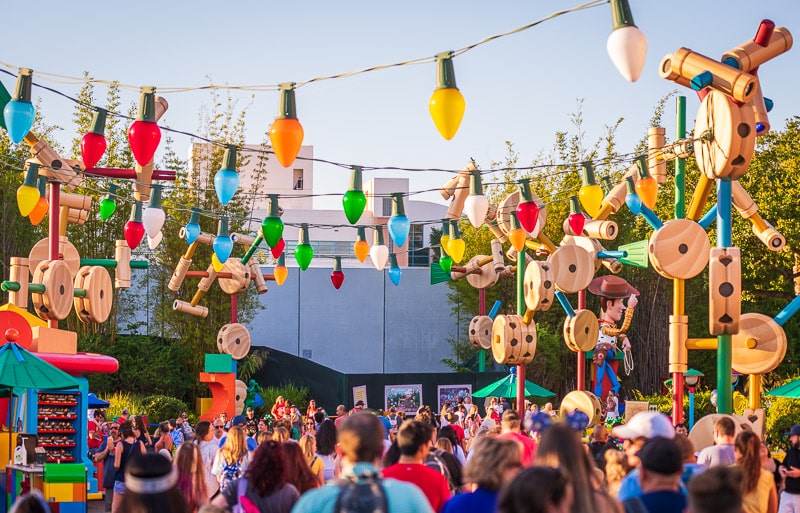 Prior to this exterior work beginning, Walt Disney Imagineering filed two new permits for Toy Story Roundup Rodeo BBQ at Disney’s Hollywood Studios. To our recollection, these are the first permits in at least a year, as work has progressed at a snail’s pace on this project.

The first permit is for “Project T – Themed Facades,” which almost certainly refers to the exterior of the building. It doesn’t yet look like a themed playset, unless kids are playing with concrete boxes these days. The contractor on this permit is Brilliant Creative Fabrication, which has worked with Walt Disney World in the past on a range of projects involving everything from “dinosaurs to outer space” and “fairy tales to virtual reality.” 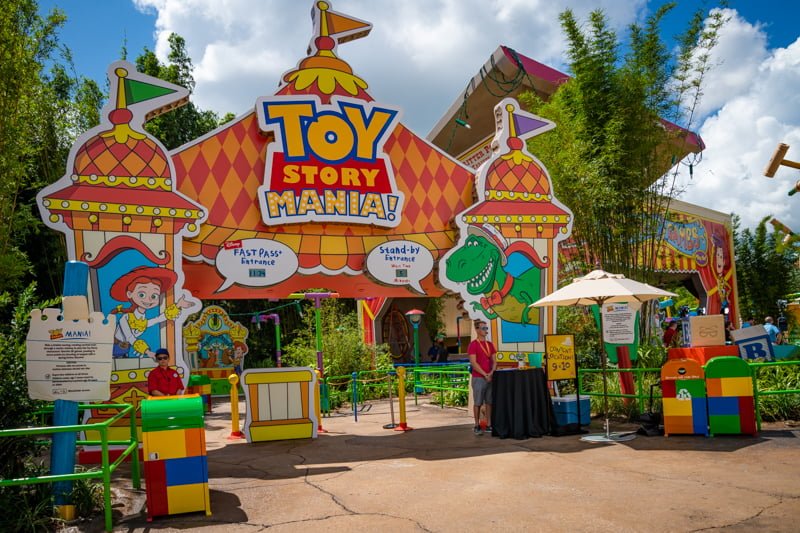 The second permit is for fabrication and installation of set pieces, which likely refers to all of the simulated cardboard cutouts inside and outside the restaurant.

These permits expire in August 2023, giving the contractors and Imagineering another year to finish up this component of the project, in theory. However, that’s the default duration for permit work and unlikely has any bearing on the opening date of Toy Story Land’s Roundup Rodeo BBQ. 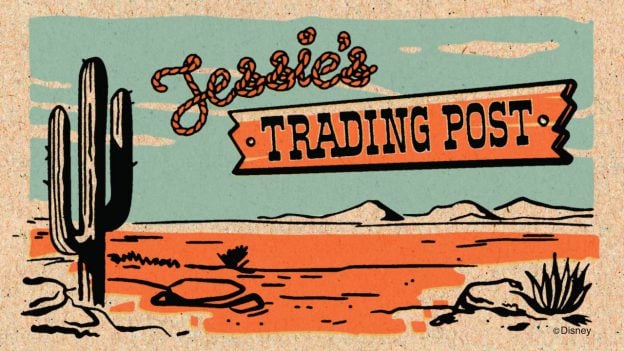 When announcing the now-open Jessie’s Trading Post gift shop earlier this year, Walt Disney World provided an update on the restaurant: “Also coming in 2022 to Andy’s backyard is the previously announced Roundup Rodeo BBQ restaurant! In this unique, fun, family-friendly dining experience, guests will enjoy delicious barbecue fare while surrounded by a kaleidoscope of toys, games, and playsets that Andy has brought together to create his one-of-a-kind rodeo.

Again, we no longer believe this is accurate. Walt Disney World has offered next-to-no official updates on Toy Story Roundup Rodeo BBQ Restaurant in the last 6 months, and it would come out of left field at this point for the restaurant to open before Winter 2023. 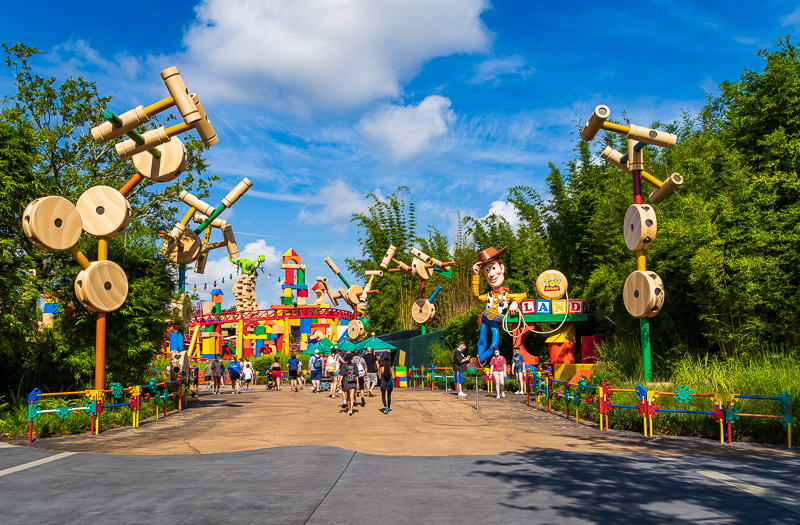 You may recall that Walt Disney World first announced the Toy Story Roundup Rodeo BBQ Restaurant would open in 2020. That announcement was made before the closure of the parks, and even then didn’t have an opening month or season attached to it. Our expectation at the time was thus that it would open close to Christmas 2020.

Then the multi-month closure happened, and all construction was paused. Even after Walt Disney World reopened, it took many major projects several more months to regain momentum. Toy Story Land’s Roundup Rodeo BBQ Restaurant was one such project.

At some point that fall, work resumed on Toy Story Roundup Rodeo BBQ Restaurant. Walt Disney Imagineering filed several construction permits for the interior with addresses that would match the location, and progress could be observed on the roof of the warehouse that’ll house the restaurant.

Fast-forward to 2022, and the concrete ‘warehouse’ for Toy Story Land’s Roundup Rodeo BBQ Restaurant is finished…and has for at least 18 months. We’ve seen intermittent work on the exterior and construction crews around the project, but it’s impossible to ascertain the location’s actual progress since it’s literally a window-less warehouse. Nothing major has happened in over a year.

Unlike other projects that have been delayed indefinitely or cancelled, Toy Story Roundup Rodeo BBQ Restaurant will directly generate revenue and addresses a need–a lack of dining capacity at Disney’s Hollywood Studios. It has not been and won’t be cancelled.

With Space 220 Restaurant, the delay was driven by physical distancing in restaurants last year, which dramatically cut into profitability. Once that was dropped, staffing shortages became an issue. With those problems resolved, Space 220 Restaurant opened and has been booked solid since.

Walt Disney World has taken a similar approach with Roundup Rodeo BBQ Restaurant. The company moved slower on construction because it was simply not advantageous to open the restaurant, and wouldn’t be truly needed in terms of demand and attendance until this year.

While we’ve heard that work still needs to be finished on the inside–and there’s a bit of decorating to be done on the facade of the building–the timeline here is being dragged out by design. Given its wholly unambitious concept, the Toy Story restaurant could be finished in a matter of months (maybe even weeks!) if it were deemed a high priority. However, it is not. 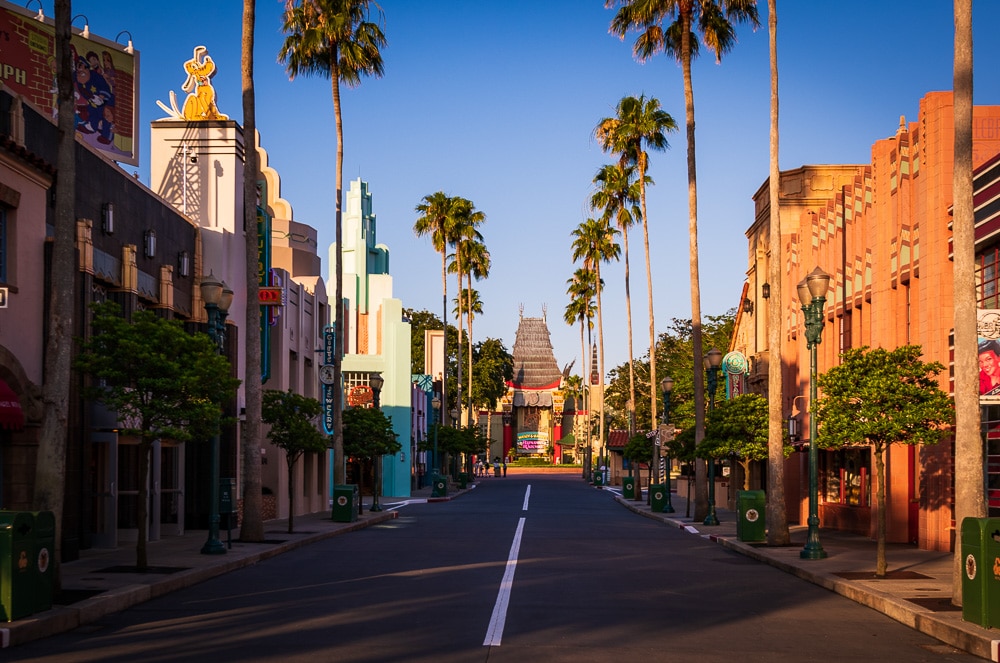 At this point, we’re likely looking at 2023 for the opening of Toy Story Land’s Roundup Rodeo BBQ Restaurant, despite Disney’s earlier promise that it would open this year. While late December is still a possibility, the deck is stacked against that timeframe.

There haven’t been any rumors about hiring or transfers, staffing shortages are still persisting for culinary roles, and we haven’t spotted any job postings specific to this location. Unless Disney has already quietly moved Cast Members to Roundup Rodeo BBQ Restaurant–or does so very soon–having the location open this month will be exceedingly difficult. 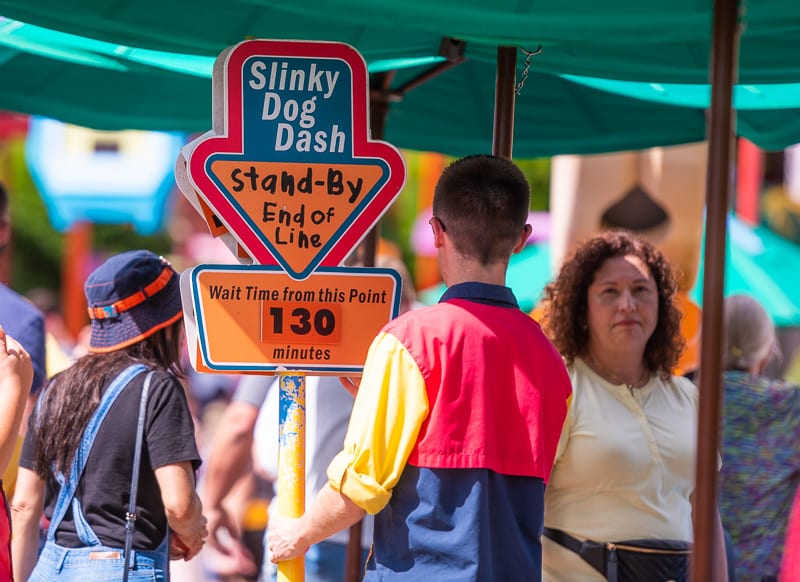 With that in mind, we could debate when it makes the most sense to open Toy Story Roundup Rodeo BBQ Restaurant in 2023 from a strategic perspective. In other words, when demand will necessitate it. If this were an attraction (like TRON Lightcycle Run), this would be precisely my line of analysis…and my conclusion would be in time for Presidents’ Day Weekend. From that perspective, it would make sense for Toy Story Roundup Rodeo BBQ Restaurant to open on February 17, 2023.

However, I do not think that’s the calculus when it comes to restaurants. For one thing, there’s the aforementioned staffing shortage for culinary roles. That may preclude Walt Disney World from opening Toy Story Roundup Rodeo BBQ Restaurant when they want to open it. 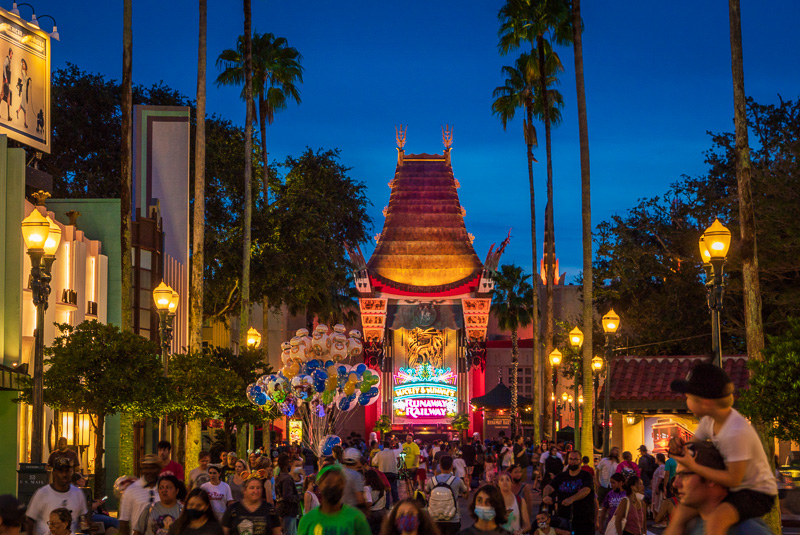 For another thing, Advance Dining Reservation demand is going to be sky-high for Toy Story Roundup Rodeo BBQ Restaurant no matter when it debuts. It could open during the slowest week of 2023, and it’ll still book up in minutes. Few people are going to book vacations to see Toy Story Roundup Rodeo BBQ Restaurant, so it doesn’t have tremendous marketing value.

In short, my expectation is that Toy Story Roundup Rodeo BBQ Restaurant will open as soon as it can open. Disney may be deliberately slow-rolling construction, but that’s likely due to the practical realities of staffing this venue once it debuts–not to maximize the marketing impact. As such, speculating about an opening date is a fool’s errand. I could get lucky and guess the correct date, but it’ll be purely by coincidence.

What I will reiterate is that February 17, 2023 is a key date from the perspective of it being when Disney’s Hollywood Studios will absolutely need more dining capacity. That will kick off one of the 5 busiest weeks of the year at Walt Disney World. So if the company can open Toy Story Roundup Rodeo BBQ Restaurant by then, they definitely will. That very well might be the target date at this point, in which case it isn’t a terrible guess. 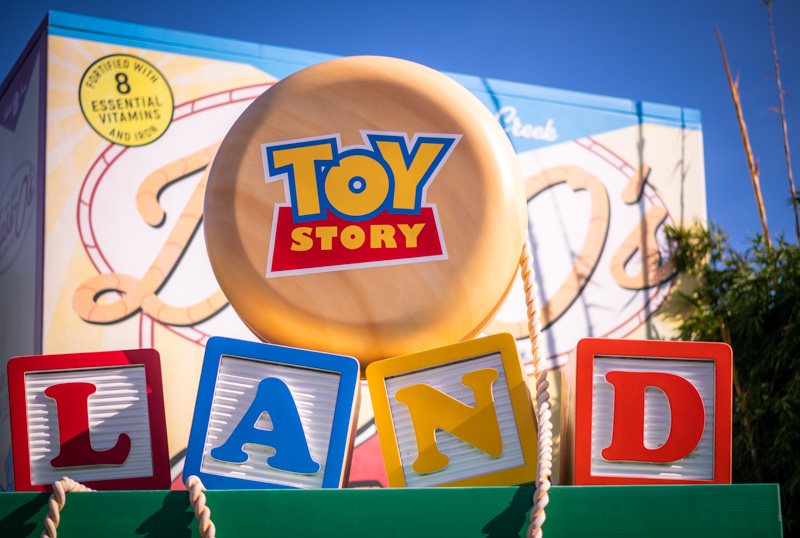 Beyond that, our first impression of Roundup Rodeo BBQ Restaurant is generally mixed. Three of the primary criticisms of Toy Story Land have been the lack of shade, air-conditioning, and dining options.

While we’ve really enjoyed both the breakfast and lunch/dinner menus at Woody’s Lunch Box, the lack of seating and zero indoor seating definitely put a damper on it. On the plus side, a makeshift gift shop has been added to the exit of Toy Story Mania. 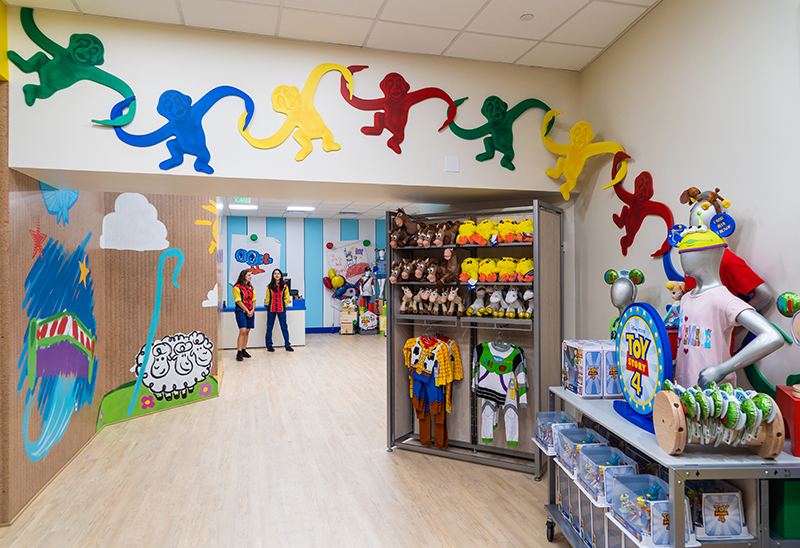 This new table service restaurant should help address all of those issues.

Toy Story Land is currently pretty miserable during the summer heat or daily rain showers. Giving guests even a temporary reprieve from the sun or storms in a place that isn’t the restrooms would be nice. 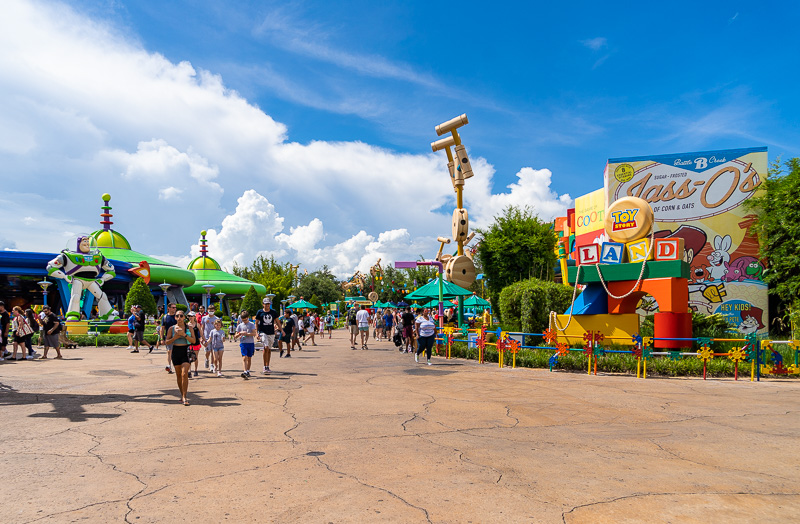 What do you think about the addition of a table service restaurant to Toy Story Land? Do you agree or disagree with our thoughts? Any questions we can help you answer? Hearing your feedback–even when you disagree with us–is both interesting to us and helpful to other readers, so please share your thoughts below in the comments!