We normally don’t make much of an effort to photograph the sunrise, but “One More Disney Day” was different. For one thing, after we had done The Many Adventures of Winnie the Pooh, Sarah had decided to go back to the room to take a nap, so I was by myself again and could do whatever I wanted. 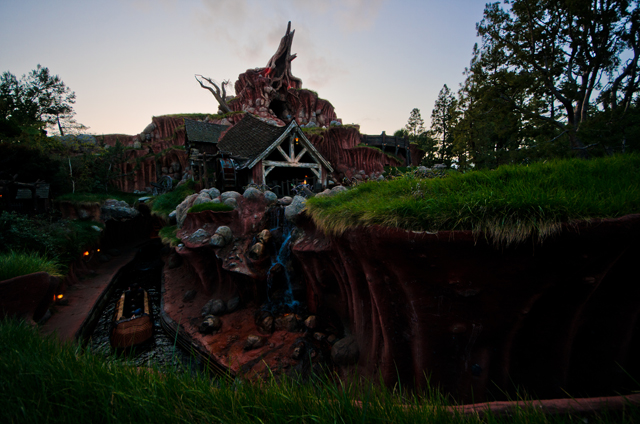 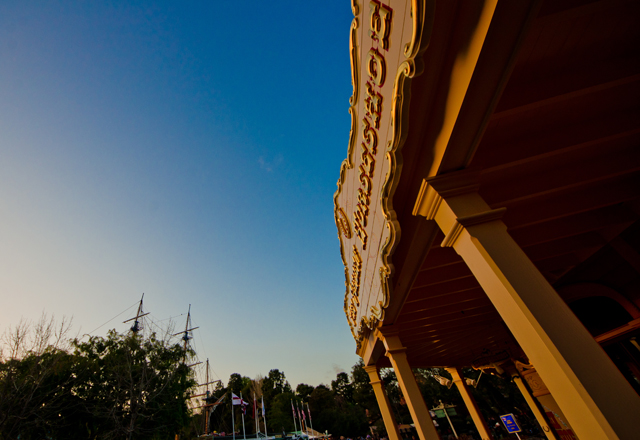 It didn’t help that while I was doing all this running around, I was distracted by the filming of Modern Family. Ryan and Gregg had mentioned that they saw the filming earlier in the day, but Sarah and I had missed it. Being huge Modern Family fans (it’s right up there with New Girl as our favorite sitcom), we were really disappointed that we had missed the filming. Luckily, I saw them filming in Frontierland! I had never (to my recollection) seen on-location filming, so I stopped and watched for a while. Nothing extraordinary happened, but I did see…

Talk about a major plotline spoiler, right?! They filmed this “scene” over and over again. Finally, I got bored with this and went back to the hub. 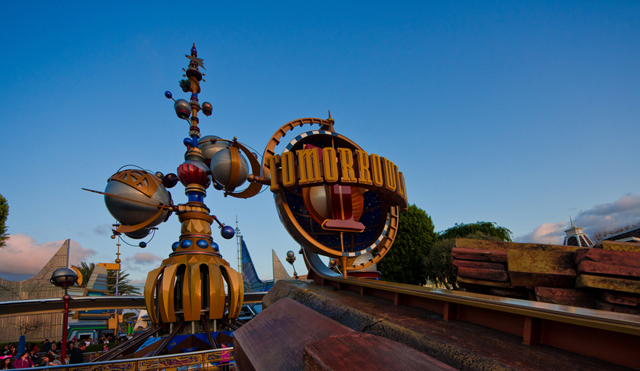 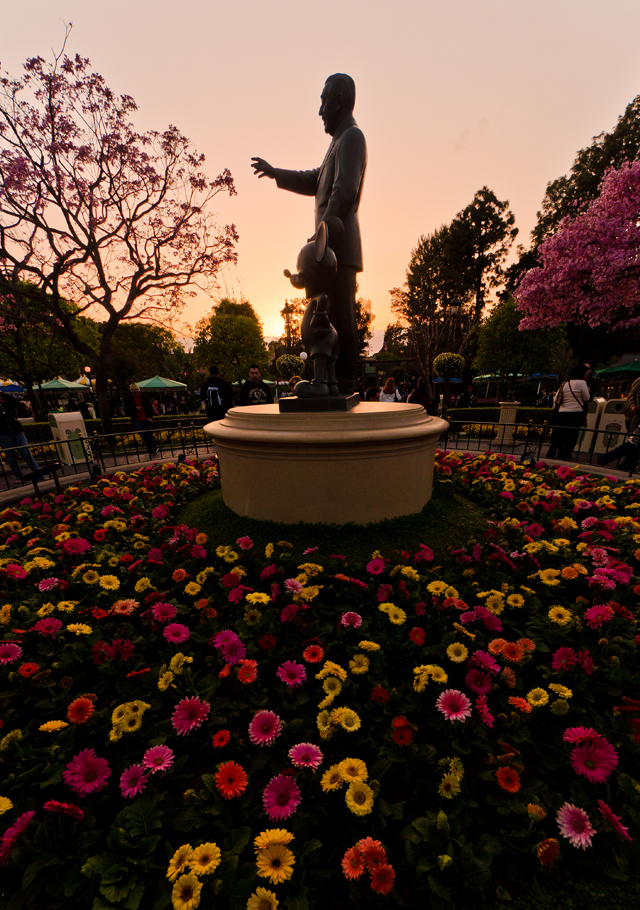 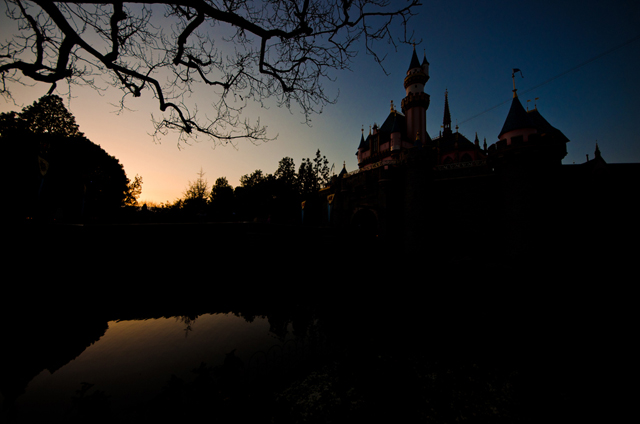 Luckily, even though the sunset was a bit of a letdown, the blue hour sky was amazing. I don’t even begin to understand the science behind this (but really, who needs science?!), but for whatever reason, the camera picks up a more vibrant and deeper shade of blue than the eyes can see. I assume the reason for this is just that our eyes can’t see this spectrum of color. My alternative guess is that voodoo causes this.

Here are some of my favorite blue hour photos: 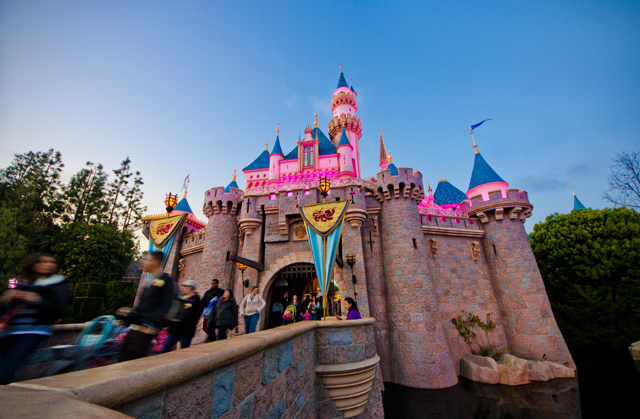 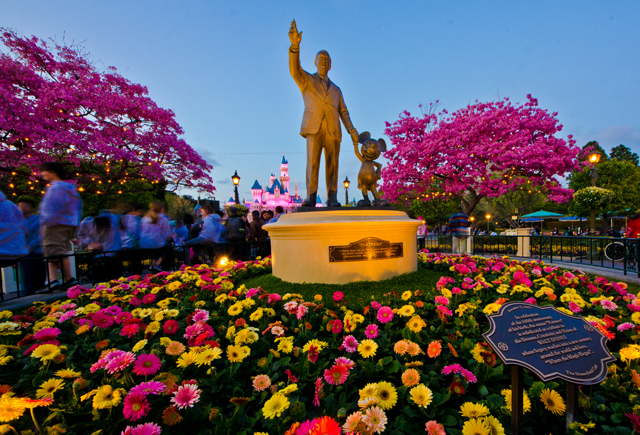 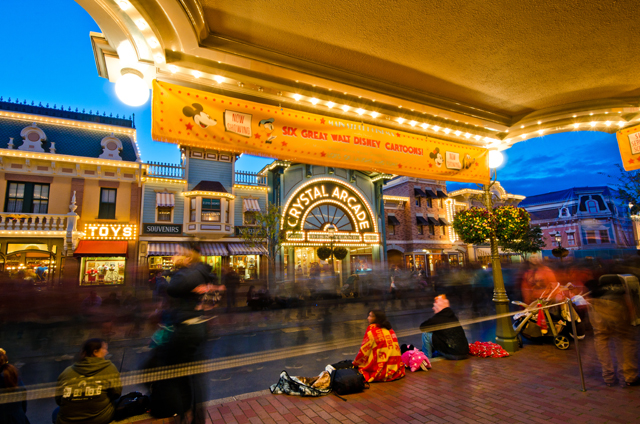 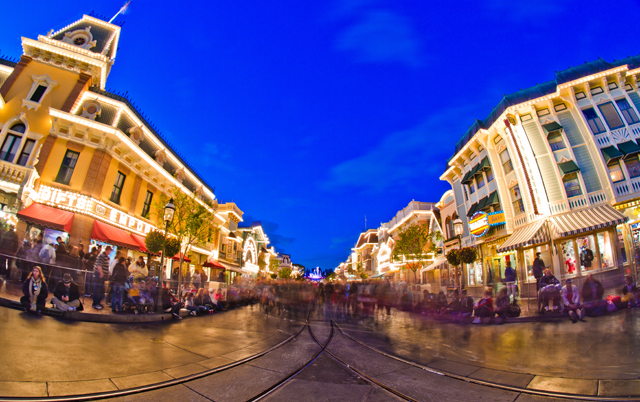 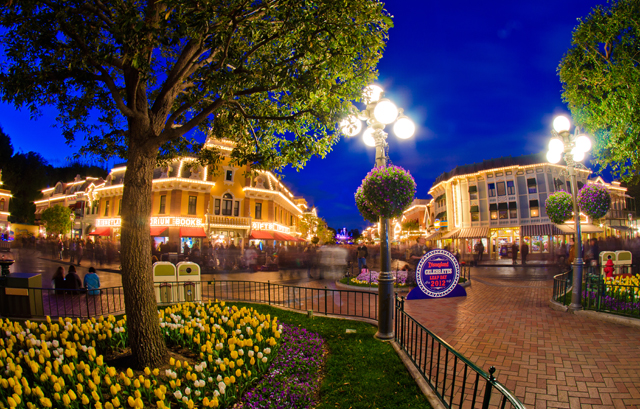 Regardless of the actual cause, a good blue hour sky is a delight for photographers. While I normally increase the vibrance in my photos to make them pop a bit, I often decrease the vibrance of a nice blue hour photo. Unfortunately, in my experience California doesn’t have a lot of nice blue hour skies like Florida. The evening of “One More Disney Day” was definitely an exception to this! 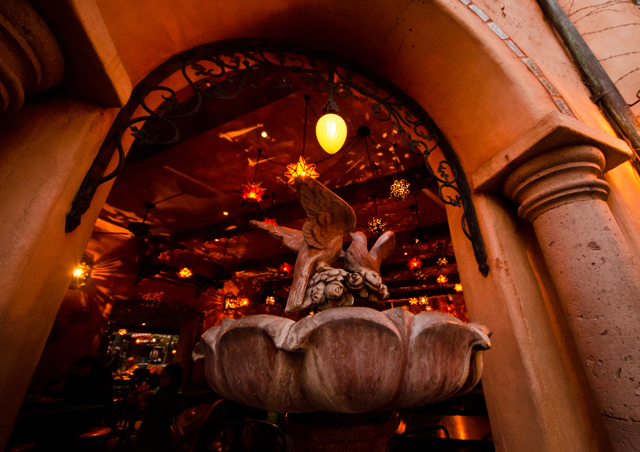 We had VIP seating for the Soundsational Parade at the Main Street USA Train Station shortly before the parade started and gave Sarah a call to make sure she was on her way back. Luckily, she was, and she made it just before the parade started. I expected a mad rush of people right around 6 pm after they left work (actually, isn’t the typical work day from 11 am until 2 pm in California?), but that didn’t seem to happen. More people showed up, but it was more a slow trickle than a mass of people. It took right until the parade started at 7 pm for the crowds really to appear. Even though the park was starting to fill with people, the crowd wasn’t really noticeable from up at the Train Station. The seating area we were in only had a few people, and there wasn’t a Cast Member checking people into it (so really, anyone could have just shown up and sat there), which lulled us into a false sense of “uncrowdedness.” As we would find out after the parade, the park was actually packed. 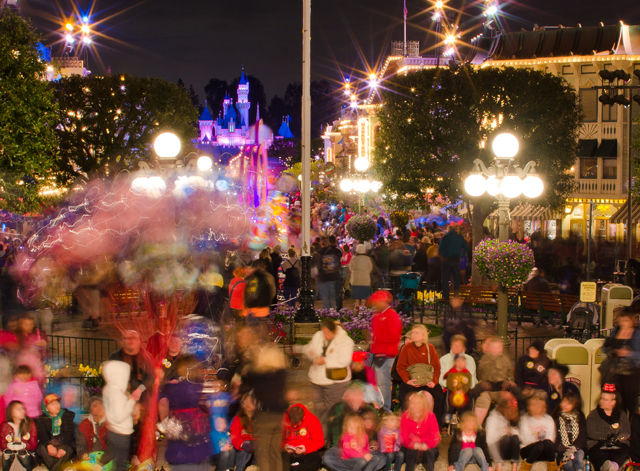 This was our first time seeing Mickey’s Soundsational Parade. I went in with fairly high expectations, knowing it was designed by Kevin Kidney and Jody Daily, both of whom are artistic geniuses (in my eyes). They didn’t disappoint. The floats in Soundsational Parade were uniquely whismical, and were very imaginative. It’s difficult to articulate exactly why they succeed so well, but it’s almost as if they take an slightly unconventional approach to a Disney parade that gives the parade an interesting flavor without feeling forced or contrived. The floats are thematically cohesive and visually engaging, rather than garish or thrown together.

Soundsational doesn’t just excel from an artistic-design perspective. The music is also catchy and fun. It feels contemporary, but not in a topical or flavor-of-the-week way that have those who listen to its soundtrack in 5 years thinking “that parade was so 2011.” Instead, the soundtrack is catchy, light, fun, and surprisingly timeless given all of the other superlatives I’ve used to describe it. 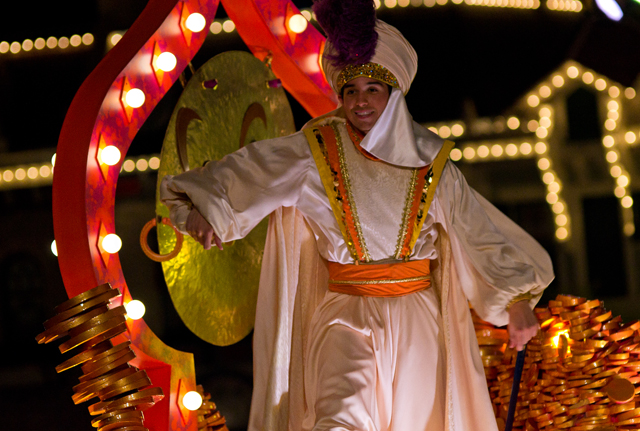 The fun doesn’t stop there. The parade continues to excel–quite possibly due to how badly other recent parades Disney has created have failed–because it aims to be a traditional Disney parade interacting with guests the time-tested way. There are no show stops or bouncing neon-clad teens in odd spandex suits. There is no Hannah Montana, no High School Musical, and no Phineas and Ferb. Instead, you have classic Disney characters (Three Caballeros!). I was wild about the drummer Mickey scene (it seems out of place compared to the rest of the parade), but everything else more than made up for it. The Mary Poppins float was easily my favorite of the entire parade.

In short, we were both blown away. As soon as it was over we turned to each other and started gushing over the parade. We’re big fans of both holiday parades at Walt Disney World, the Jammin’ Jungle Parade is pretty good, and I think Main Street Electrical Parade is okay (albeit incredibly dated), but beyond that, we’re not really fans of any Disney parades. We absolutely loved this parade, and wanted to see it again and resolved to do so on one of the following evenings. 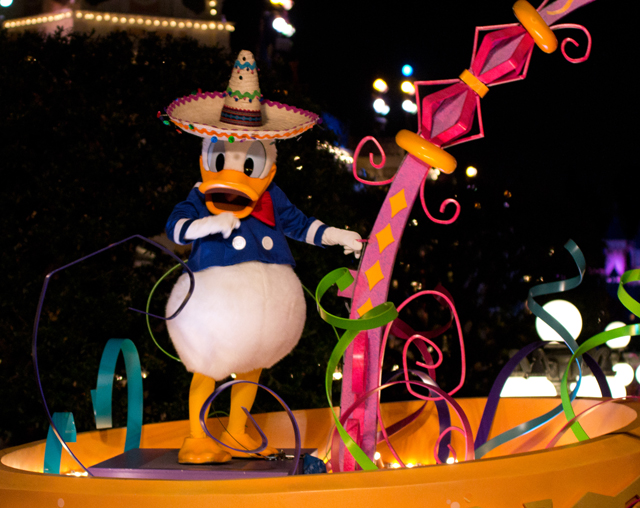 While we were watching the parade, the world famous Mr. and Mrs. Selga joined us, and they stayed with us for our adventures that followed. Our first adventure was to navigate through the huge crowd that had formed on Main Street. We assumed this was mostly post-parade traffic, so we decided to take a spin on Buzz Lightyear’s Astro Blasters before heading back into the chaos of the park. 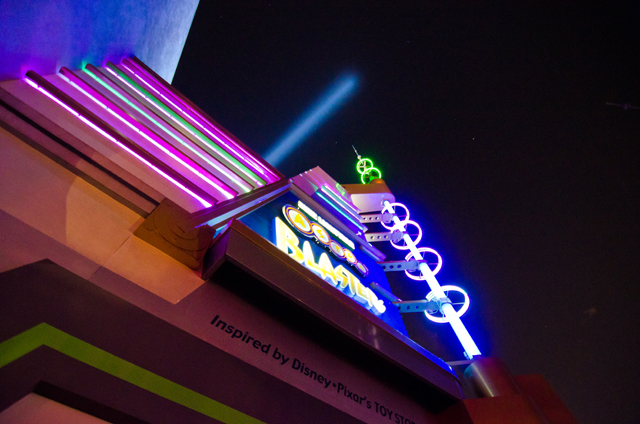 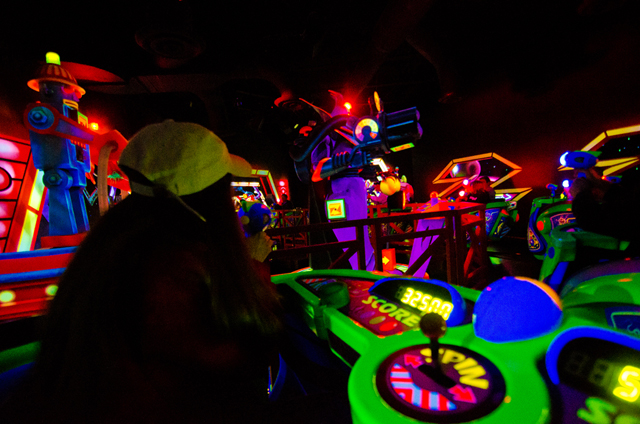 Upon exiting Buzz, we were a bit surprised to find that the crowds hadn’t let up at all, but instead, had gotten worse. This wasn’t how things typically happened after a parade, so I was a bit surprised. It seemed like the lazy Californians (apologies if you’re a lazy Californian ;)) had decided to wait until around 7 or 8 pm, rather than coming right after they finished their 4 hour work-day at 2 pm, to head to Disneyland.

It was pretty clear at this point that it was going to be a busy night, so we did the only thing that Disneyland fans in our situation could do: we got some dessert. One of our plans for the day was to gain approximately 37 pounds each in 24 hours. Well, that wasn’t the exact plan: our actual plan was to eat as many of the unique menu items that day as we could, with a presumed indirect result of gaining 37 pounds.

Although I don’t remember exactly when we headed over to Golden Horseshoe for dessert, it was definitely before 11 pm when the cherry pie was supposed to start being served. I think several of these menu items were served for longer durations than listed in the times guides. We figured relaxing with some cherry pie, caffeine, and Billy Hill and the Hillbillies would be a great way to kill some time. 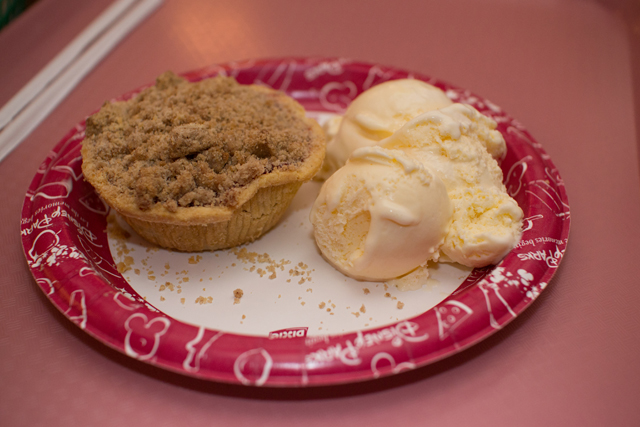 Unfortunately, our we failed to read the entertainment guide, which indicated that Billy Hill and the Hillbillies wouldn’t be starting for a couple more hours. We had an awesome “private balcony” style seat to the right of the stage (which also had phone charging outlets!), and we debated just waiting there for a couple hours, but we ultimately decided that would just be too much waiting. We could always return later to watch Billy Hill. 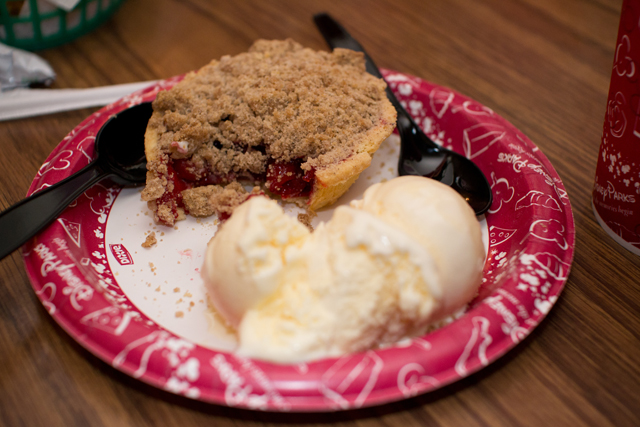 By about 10pm, all hell had broken loose. The roads outside Disneyland were gridlocked, and the park was at capacity. Lines of guests (or random masses) trying to enter the park overflowed the Esplanade. People could barely move after the second Soundsational parade, according to some reports. We happened to be in New Orleans Square around this time, and there was already a packed house for the 1am showing of Fantasmic!, which was roughly three hours away. We didn’t hear about most of these issues until hours after the fact, as no one had cell phone service due to the crowd density. So much for meeting up with Ryan and Gregg again. We assumed they had just been consumed (literally–perhaps by Murphy the Dragon?) by the crowds (or the dragon).

This was around the time Disney California Adventure closed, so presumably, a lot of guests from there came over to Disneyland. I think Disneyland management also had the sudden realization that the popularity of this event was going to far exceed their expectations. Cast Members were called over from Disney California Adventure (this much was clear based on some of the uniforms Cast Members wore as they directed Fantasmic traffic) in an effort to bring some order to the chaos. By and large, this was too little, too late. 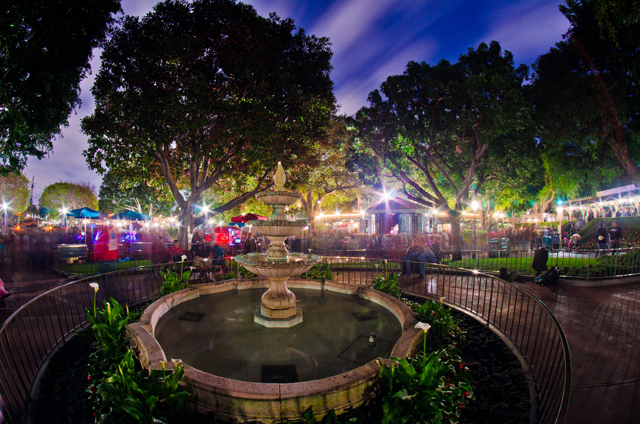 While it was clear from walking around New Orleans Square that Disney dramatically underestimated attendance, I can’t say I really fault them for it. I don’t think anyone expected the event to be this big. Even on popular Disneyland forums like Micechat.com, people seemed mostly indifferent to “One More Disney Day.” If so many diehard Disneyland fans felt this way, it followed (in my mind, at least) that casual guests wouldn’t really care about the event. Clearly, this was dead wrong.

As far as the traffic gridlock and people waiting for hours to enter the park, I’m not sure how effectively Disneyland could have avoided this. If the park is at capacity, it’s at capacity. About the only thing to alleviate that issue is keeping Disney California Adventure open later. As far as traffic goes, adding more parking at the last minute may have helped alleviate problems, but it still could have been just as bad. I certainly understand the frustration of those stuck on the outside who waited in lines for hours to get into the park.

It wasn’t a good situation and I don’t want to come across as defending Disneyland management for underestimating the high crowds. However, even Walt Disney World, which has a lot of experience with capacity closings, has similar issues around New Year’s and Easter. At Disneyland, this is exacerbated because the park is in the middle of a large city, rather than in its own self-contained “world.” To be sure, Disneyland could have handled things better, but I don’t think anything Disneyland management could have done would have completely negated the crowds inside and outside the park. 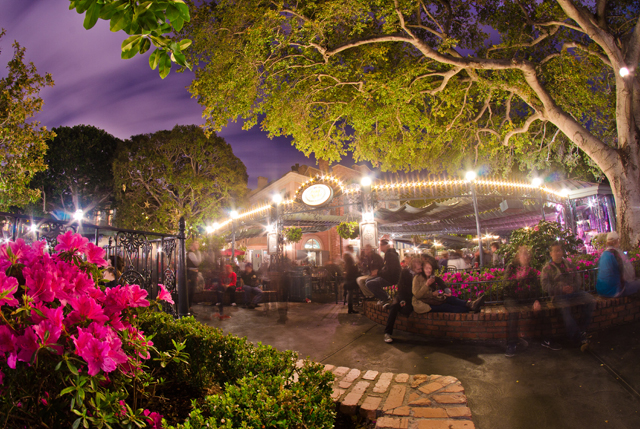 Despite all of the chaos and crowds, we were still having an amazing time in the park. The energy and excitement were palpable. People were literally everywhere, but no one seemed to mind. Everyone we encountered was pleasant and excited, and with the exception of the times we set foot in New Orleans Square, we didn’t really feel the crazy crowds too much.

PLUG: since the whole purpose of taking the trip was to create the Disneyland: Sunrise to Sunrise eBook, the majority of the “best” photos I took on “One More Disney Day” are not presented here. If you like Disney photos, I strongly encourage you to check out the eBook, Disneyland: Sunrise to Sunrise, by clicking here. If eBooks don’t interest you, fret not, as there are still a lot of good photos here, but they’re generally the ones that didn’t make the cut.