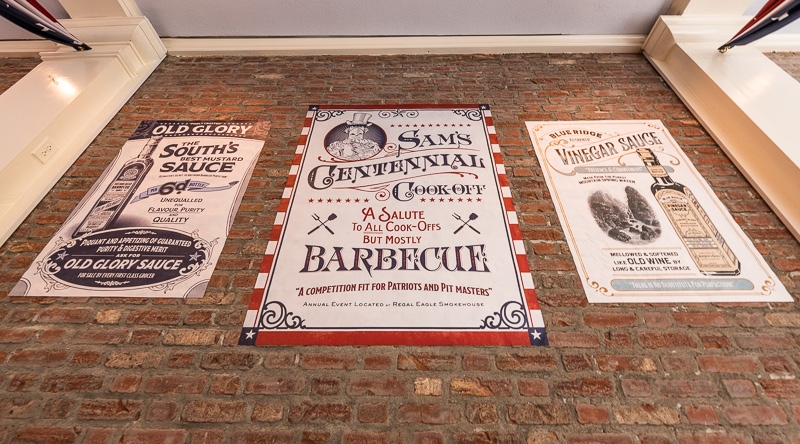 This photo tour of Regal Eagle Smokehouse: Craft Drafts & Barbecue offers a look inside the new fast-casual BBQ restaurant now open at the American Adventure pavilion in Epcot’s World Showcase. Basically, this is a precursor to our full review of the BBQ restaurant, which we’ve separated into two posts because we realize most people don’t want to read (or even scroll past) 3,500+ words about a quick service dining spot.

The Saga of Sam Eagle’s Smokehouse has been a long one, with more pre-opening coverage of this Muppet Meatery than for any prior Walt Disney World restaurant. It began last summer with the announcement that Regal Eagle would replace Liberty Inn, the much-maligned counter service food court that frequently ranked among the bottom 5 restaurants at Walt Disney World.

In the lead up to Regal Eagle’s opening, Disney released the menu and concept art for the restaurant. In a curious move, Walt Disney World also announced that Regal Eagle Smokehouse will be hosted by Sam Eagle from the Muppets. The restaurant is the site for “Sam’s Centennial Cook-Off: A Salute to All Cook-Offs but Mostly Barbecue.” Walt Disney World choosing an IP tie-in for anything is not exactly stop the presses news, but this was slightly different…

Along with that, an improved name was proposed: “Regal Eagle’s Distinctly Patriotic Smokehouse: A Salute to All Foods, But Mostly Barbecued Meats.” Sadly, Regal Eagle is now operating and there’s no sign of this objectively better name. However, all hope is not lost. Once Walt Disney World’s research team begins surveying guests and finds that the #1 complaint is “the name isn’t long enough!” I’m certain it’ll see a change.

Anyway, let’s head into Regal Eagle Smokehouse to see how things have changed since when Liberty Inn closed last summer… 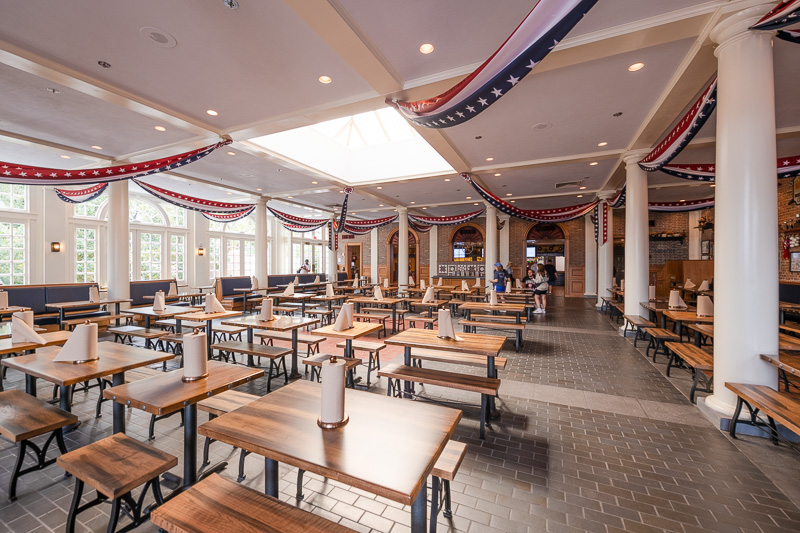 At its core, the seating area looks pretty similar.

It’s the same open area with a skylight overhead, plus pillars that break up the room a bit. 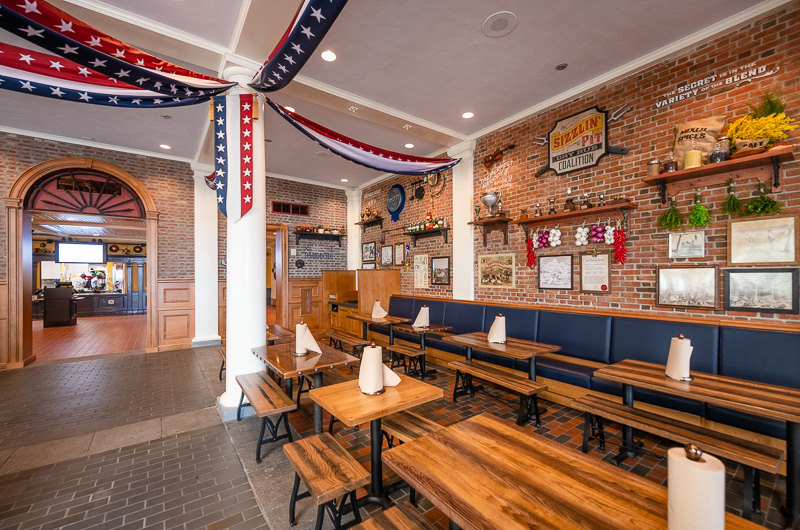 The biggest difference is that rather than the area between the pillars and the wall serving as the main walkway to the ordering area, the far side is now seating.

This breaks up the room better, and makes it feel like less of a cavernous mess hall. 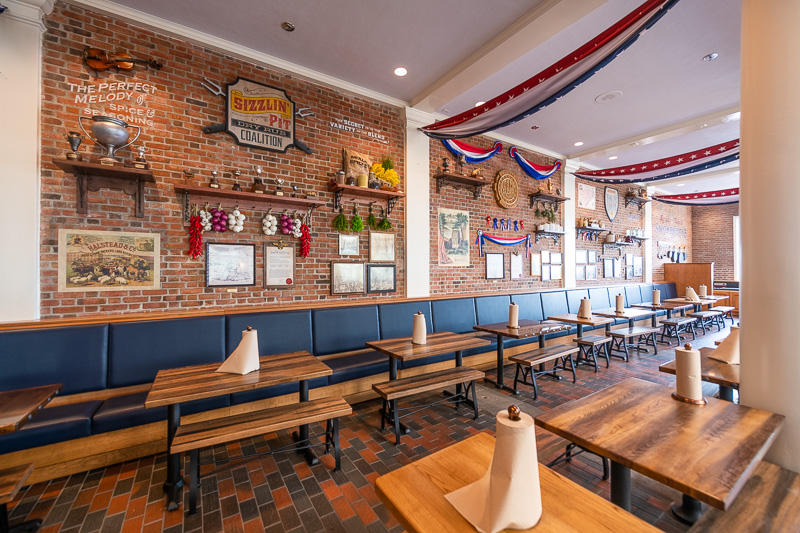 The other upside to this approach is that it’s more conducive to details in the design.

Previously, colonial flags lined this wall. It was a sensible approach, as the goal was to keep guests moving through this area, not stopping to linger over details. 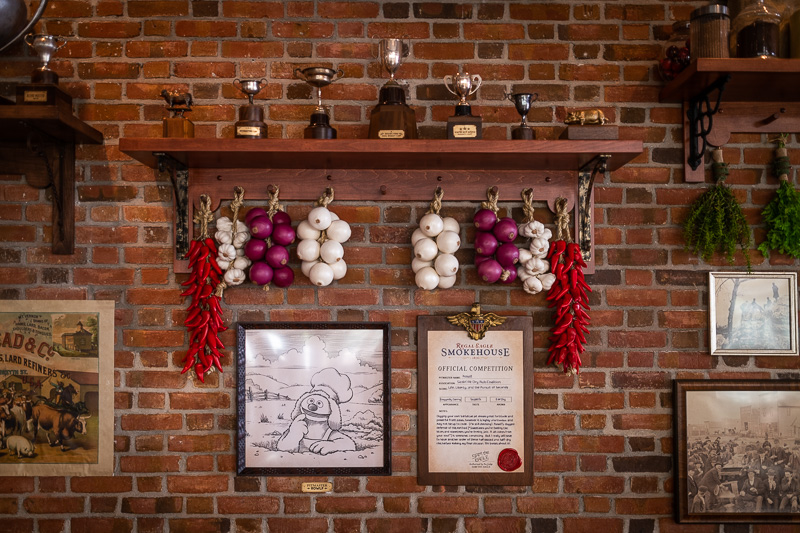 Now, there’s a mixture of items.

Essentially, it’s a tribute to all things barbecue, with an earnest appreciation for the craft. That’s interspersed with nods to the Muppets and American history. 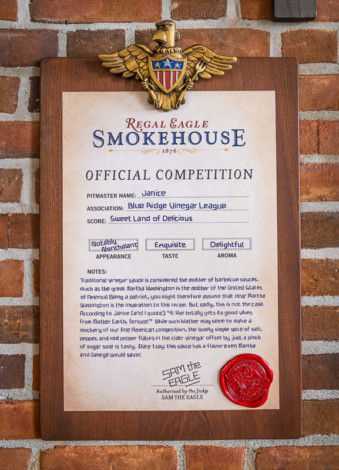 In each little section, there’s a scoresheet from Sam Eagle that rates various barbecue sauces (all of which are also served in the self-service sauce station at the front of the restaurant).

These are both amusing and interesting, with references to American history. 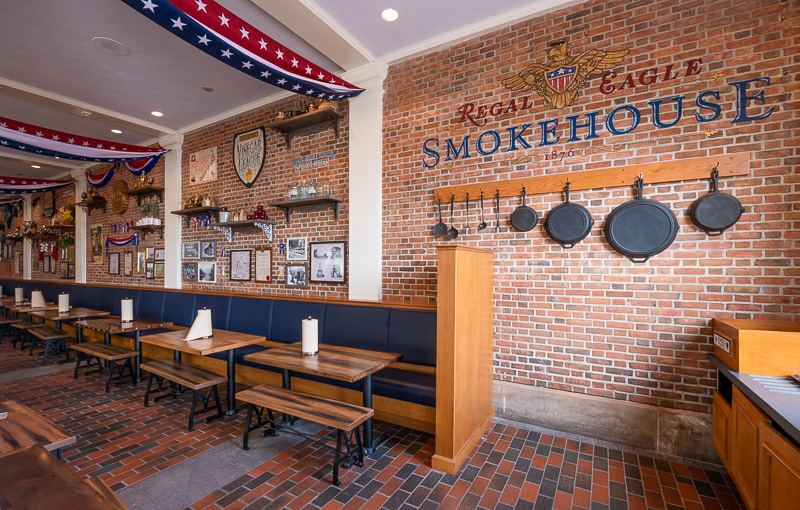 It is something of a surprise to have Sam Eagle host this restaurant. This Muppet was originally a parody of performative patriotism, and American Adventure strikes a much more earnest and sincere tone.

With that said, Sam Eagle’s character has morphed over time, and our own lines between satire and reality have blurred. Most guests are unlikely to feel the character is at odds with the authentic brand of patriotism on display in the American Adventure. 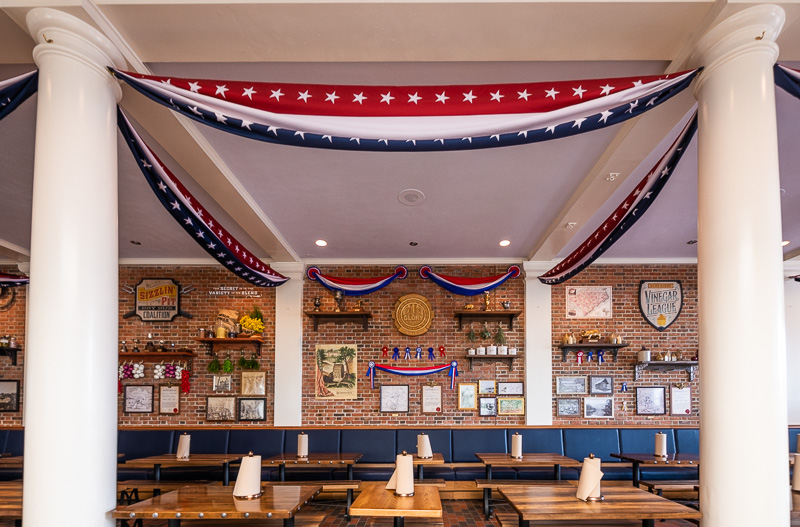 If you walked away from The Muppets Present Great Moments in American History thinking that the writers managed to toe the line between Muppet humor and reverence for American history, you’ll probably think the same here. (Except the reverence is more accurately for “American history/barbecue.”) 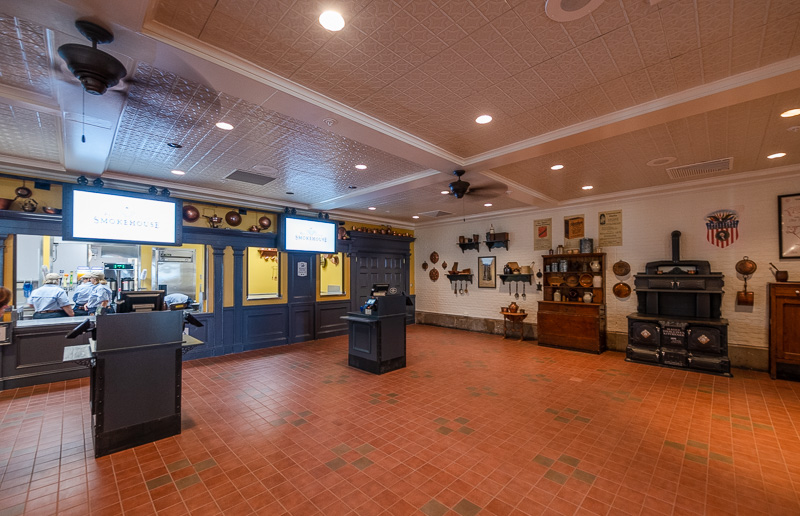 This continues in the ordering area, where you’ll find a variety of antique cookware, an oven, and beautiful posters.

Regal Eagle definitely isn’t among Walt Disney World’s most thematically-rich restaurants, but this is a clear upgrade over the design and details that could be found in Liberty Inn. 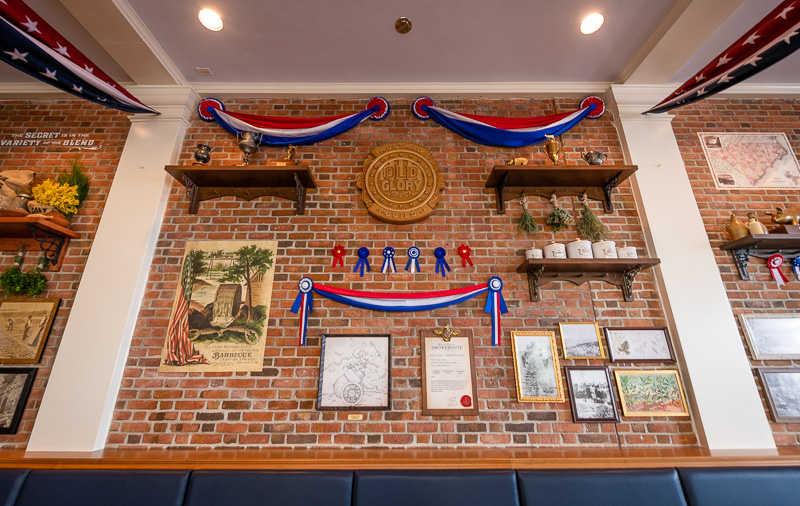 We saw a similar approach with PizzeRizzo, which was a missed opportunity and squandered opportunity. Muppet Courtyard would’ve benefitted massively from a dining area completely stuffed with over-the-top decorations, gags, and other themed design. Like the pre-show to MuppetVision or Mama Melrose, but with Muppets.

The key difference is that World Showcase is not the place for a wacky and zany restaurant. Subtle and understated are qualities deserving of praise here, as something bolder might’ve cheapened World Showcase (or at least felt out of place). 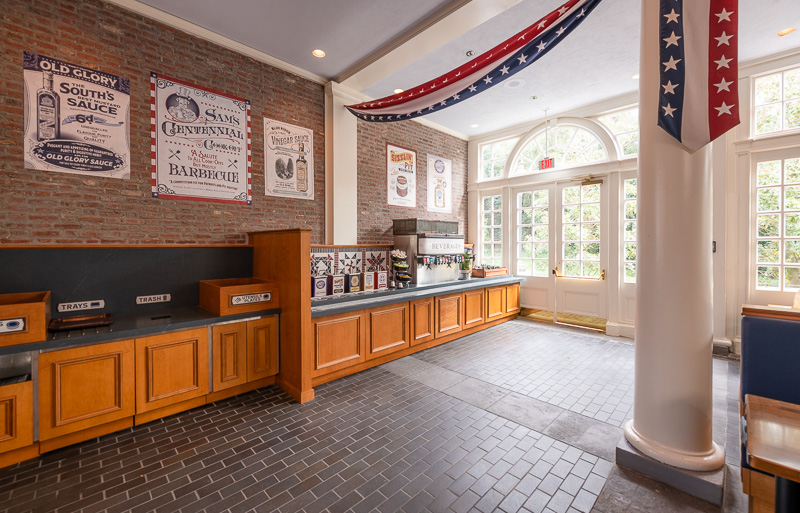 Ultimately, the balanced approach taken with Regal Eagle Smokehouse is perfect–this venue adjacent to American Adventure is not well-suited for over the top character integration. Thankfully, Regal Eagle Smokehouse instead offers an interior that balances subtle (mostly hidden) humor and references to the Muppets with a sincere appreciation for American history and barbecue.

There’s a sufficient amount of design and detail to satisfy Walt Disney World fans who want something more from restaurants, while there’s not so much that the interior looks tacky or out of place. Regal Eagle is neither utilitarian and boring nor is it busy and overwhelming. The style isn’t going to blow any minds or stick out as something memorable, but it does the job perfectly for this particular venue. If you’re wondering how the cuisine tastes, you can read Regal Eagle Smokehouse: A Review of All Foods, But Mostly BBQ Meats, which is our assessment of everything on the menu!

Do you agree or disagree with our assessment of Regal Eagle’s interior? Do you wish there were more nods to the Muppets–or none at all? Any questions we can help you answer? Hearing your feedback–even when you disagree with us–is both interesting to us and helpful to other readers, so please share your thoughts below in the comments!