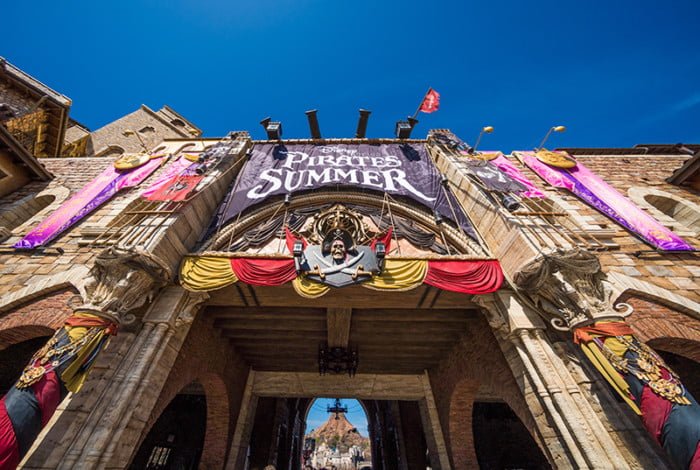 Disney Pirates Summer is a special event themed to the Pirates of the Caribbean film franchise. The marquee entertainment of the swashbuckling festivities is Pirates Summer Battle “Get Wet”, with special dining and merchandise also available. This post features some of my photos and thoughts on Pirates Summer at Tokyo DisneySea, along with tips for those of you planning summer visits to Japan.

Tokyo DisneySea’s Pirates Summer event runs during most of July and August. Like Natsu Matsuri at Tokyo Disneyland, the main harbor show during Pirates Summer involves soaking guests to keep them cool during Japan’s incredibly hot and humid summer months.

While initially skeptical of the concept, Pirates Summer quickly won me over. I was hesitant because other recently-added events at Tokyo DisneySea have felt like a poor fit thematically (I’m looking at you, Pixar Playtime) with garish decor that has detracted from the brilliant core design of Tokyo DisneySea. Pirates Summer has neither of these problems.

As a special event, Pirates Summer is a perfect fit for Tokyo DisneySea. The film series is (obviously) set on the high seas, so there’s that. Even beyond the basic setting, Pirates of the Caribbean presents a better tonal fit. The color palette is muted, the movies are fun yet adult, and the franchise’s score has the same soaring, epic quality as DisneySea.

It’s actually a shame that no one thought of this special event until the twilight of Pirates of the Caribbean’s popularity. It’s a great addition for the summer, and I would’ve loved to see how much more ambitious Disney and OLC would’ve gotten with the event if the movies were still the huge blockbuster pulls that they once were. 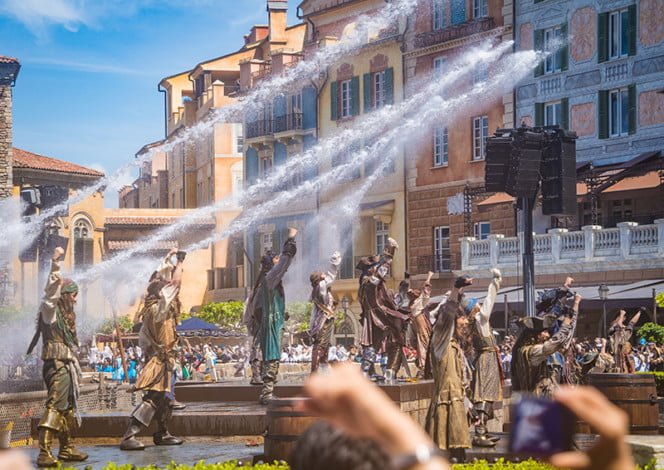 The unequivocal highlight of the special event is the harbor show, Pirates Summer Battle “Get Wet.” Those aren’t air quotes around get wet. The in-park announcement cautions that you may get wet, but you should be prepared to get soaked if you’re in the main viewing area.

This short video pretty much summarizes what to expect from the show in terms of getting wet:

In this entertainment program inspired by the world of the Pirates of the Caribbean franchise, a crew of pirates led by Captain Barbossa takes over Porto Paradiso in Mediterranean Harbor. In an attempt to recruit members for his crew, Captain Barbossa puts the Guests through pirate training, which is basically an excuse to douse everyone with lots of splashing water.

Just as the Guests and the pirates form a bond, Captain Jack Sparrow sails into the mix. A longtime rival of Captain Barbossa, this appearance goes exactly as expected, and guests are thrown into the midst of a pirate battle, complete with fire and water fights. 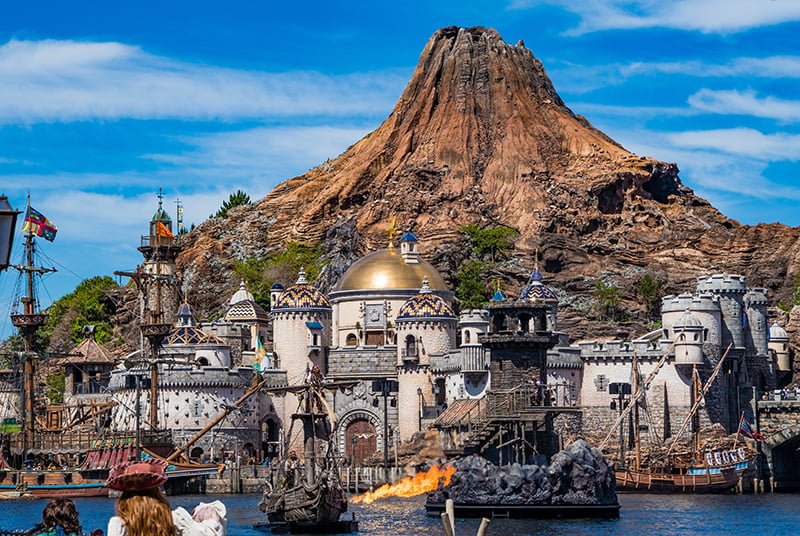 The plot is only a pretext, and if it doesn’t make much sense, don’t worry. This show is more about the ‘sense’ of battle, and you actually do feel like a member of the crew.

That might sound pretty inconceivable, but Pirates Summer Battle “Get Wet” has an incredible energy and is an immersive experience. 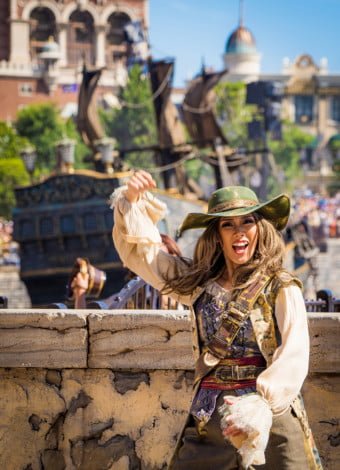 The show is all about the palpable energy of the crowd, the swashbuckling dance moves, and nervously watching the pirates stagger with oversized steins of water uncertain as to if it’s going to be thrown in your face.

That’s right, large steins and buckets of water could be dumped on you during Pirates Summer Battle “Get Wet.” 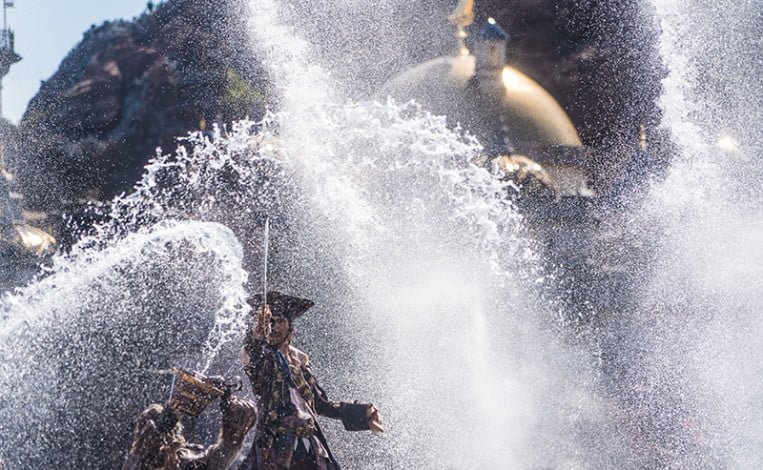 Between that and the fire hoses that spray guests, you’ll definitely get wet if you’re in the popular show spots around Lido Isle or Piazza Topolino (at the front of the park). Pack rain suits and dry bags for anything you don’t want ruined if you’re in those areas.

Photographers will also want to pack a camera poncho. I forgot mine, and watching the show up close was like playing with fire as a result. It’s an incredibly fun show to photograph, just be prepared for a keeper rate of around 5%. 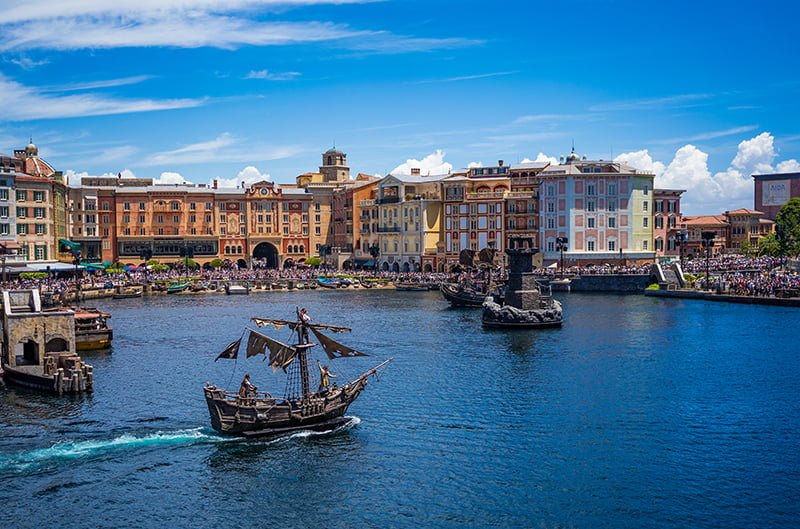 If you watch from farther back near the entrance or outside the perimeter of the show areas (to the left of Lido Isle or to the right of Zambini Bros), you are unlikely to get soaked. The idea of getting wet might sound totally unappealing, but it’s great fun. And on a sweltering day at Tokyo DisneySea, it’ll be incredibly refreshing.

I can’t overstate just how fun and well-done Pirates Summer Battle “Get Wet” is. This is totally different from any other seasonal harbor show at Tokyo DisneySea, and is my favorite of the bunch. 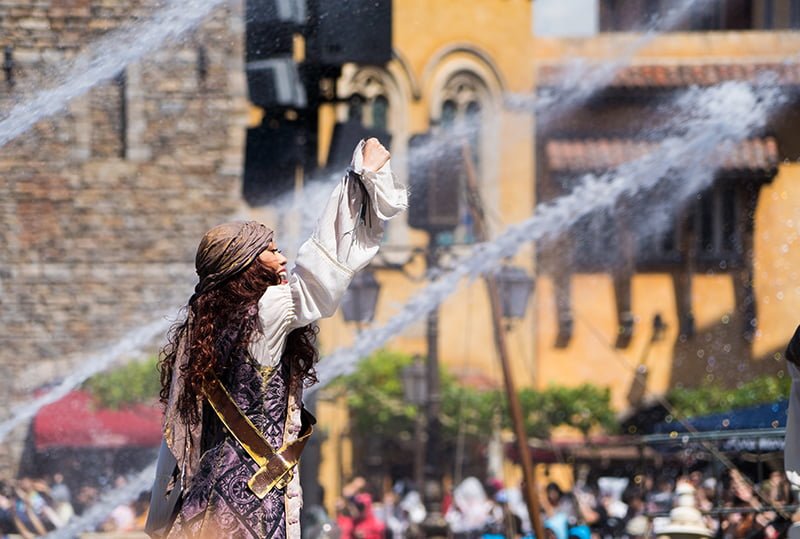 While the others are each individually good, with exquisite costuming, catchy music, and great choreography, they all blur together. The presentation is formulaic, with characters dancing and waving on the exact same floats season after season.

By contrast, Pirates Summer Battle “Get Wet” is interactive, doesn’t include a single fur character, and strikes a totally different tone. Best of all, it doesn’t feature that incessant blue whitecap float (which always reminds me of Crest toothpaste, for some reason). Breaking the mold of Tokyo DisneySea entertainment is great. 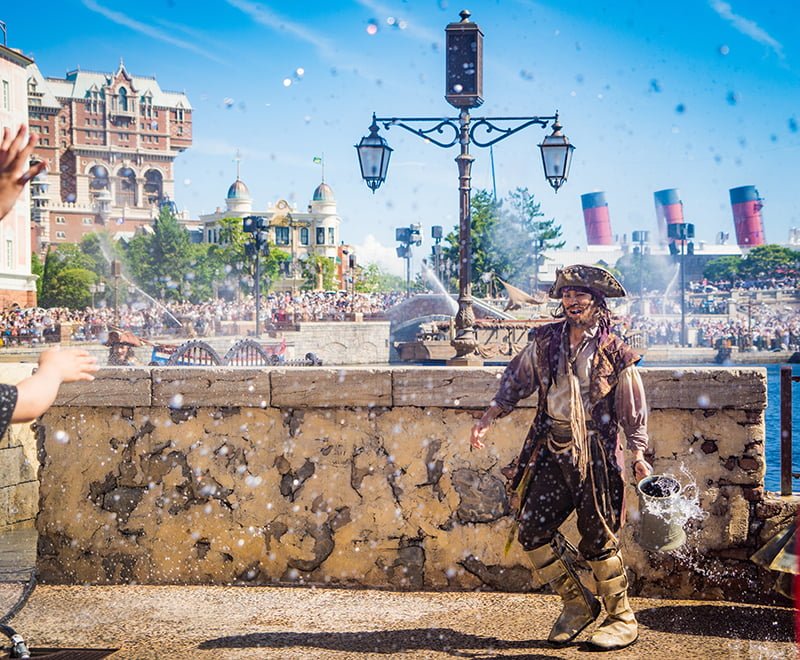 As for merchandise, I’d say it’s pretty meh unless you’re a big fan of the film series–and fairly dark designs. There are roughly 60 different types of products with Pirates Summer designs available during the special event.

T-shirts and bandanas with Pirates Summer Battle “Get Wet!” and Captain Jack Sparrow designs are sold, as are shirts and towels featuring Mickey Mouse and friends as pirates. 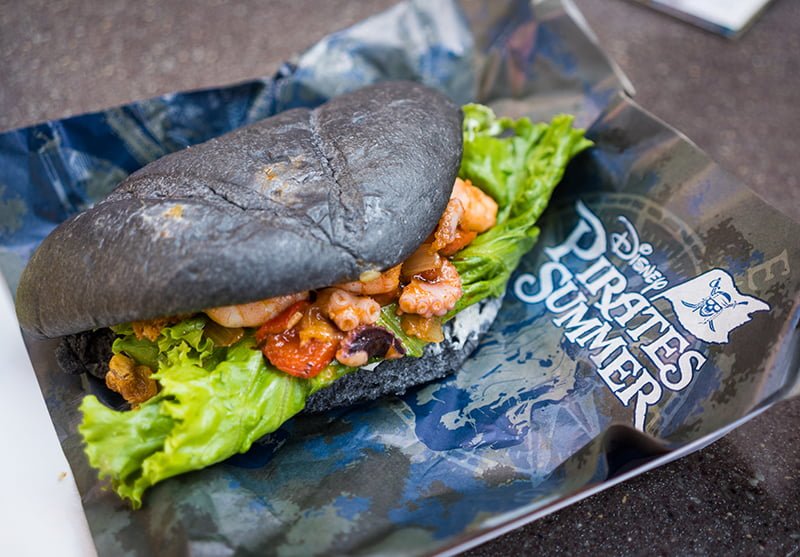 In terms of food, the most noteworthy items are at Miguel’s El Dorado Cantina, which has been transformed into “Pirates Cantina Fiesta.” I’m not sure whether this restaurant features special roaming entertainment (as it has for past summer events), but I would suspect so.

We did not dine at Miguel’s El Dorado Cantina during Pirates Summer. We’ve found the food to be bland there the last couple of meals we’ve done at Miguel’s, so we opted to pass. The special set menu featuring a skull-shaped serving of rice with chicken, and tacos made with black tortilla did look cool, but not cool enough for us to risk the quality–especially with so many great restaurants at Tokyo DisneySea. 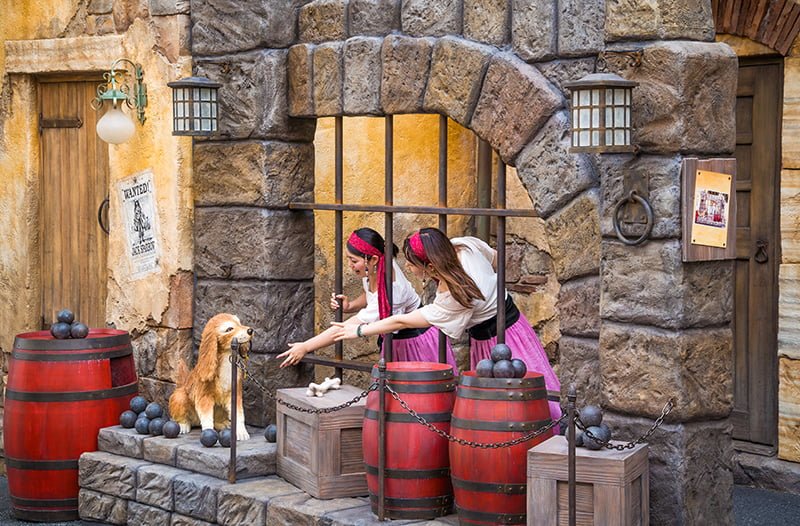 Decorations for Pirates Summer at Tokyo DisneySea are pretty low-key. Around Mediterranean Harbor there are pirate-themed decorations including flags with the skull-and-crossbones motif, and parasols in black and red.

Around the Piazza as well as in the quiet alleyway that goes behind Zambini Bros, there are a number of photo ops where guests can take pictures that are fun nods to both the film series and classic Disneyland attraction. (I swear a couple of these were at the last D23 Expo.) 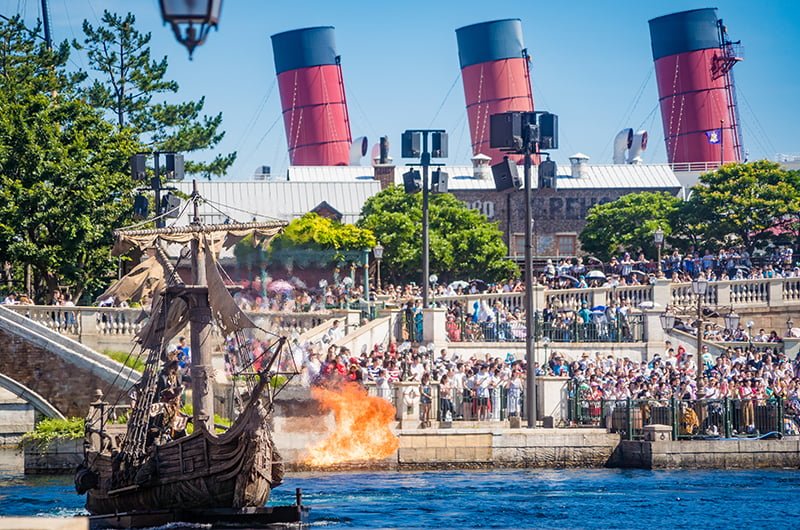 All things considered, Pirates Summer is a great event. It’s definitely smaller in scale than other seasonal events that contain a multitude of decorations and multiple entertainment offerings, but that’s perfectly fine by me. I don’t think this calls for as much decor as Christmas, Halloween, or even Easter, and I’d rather have one exceptional harbor show than a handful of dull smile and wave ones. Pirates Summer is absolutely worth your time if you happen to be in Japan during the summer, although due to heat and humidity, it’s difficult to recommend a trip to Tokyo in the summer (from outside of Japan) just for this special event.

Is Disney Pirates Summer at event that interests you? What would you think of a “Get Wet” show at Walt Disney World during the hot and humid summer months? If you’ve experienced Pirates Summer, what did you think of the event? Hearing feedback about your experiences is both interesting to us and helpful to other readers, so please share your thoughts below in the comments!