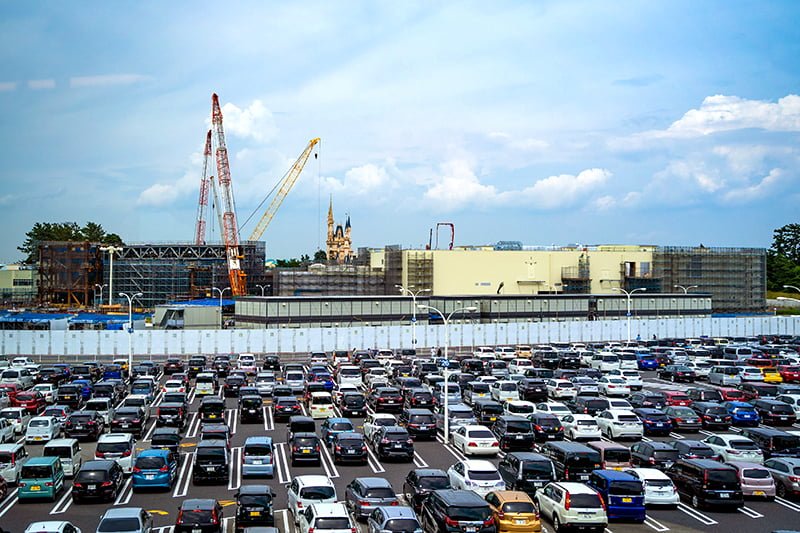 We’re back with construction progress photos & video from the Beauty and the Beast mini-land that will bring a new castle and big-budget Be Our Guest trackless dark ride to Fantasyland, Big Hero Six attraction to Tomorrowland, and Minnie’s design studio to Toontown at Tokyo Disneyland. Work continues to move at a fast pace in order for this huge expansion to meet its opening date ahead of the Tokyo 2020 Summer Olympics.

In this update, we’ll also take quick looks at the Soarin’ addition over at Tokyo DisneySea and the new turnstiles at Tokyo Disneyland. All three of these projects come before the mega-expansion of FantaSea Springs, consisting of new Frozen, Peter Pan, and Tangled mini-lands (plus a new hotel) over at Tokyo DisneySea. With that slated to open in 2022, Japan’s two Disney parks are set to look dramatically different in 5 years (and likely have significantly higher attendance) than they do today.

As excited as we are for FantaSea Springs (not its official name, just what we’ve dubbed it), visible work has yet to begin on that–just ground tests in the parking lot where it’ll be built between Tokyo Disneyland, DisneySea, and Bayside Station, so we won’t focus on that here. Instead, we’ll take a look at the Beauty and the Beast expansion, which is itself quite lavish and shouldn’t be overshadowed by the record-breaking expansion to Tokyo DisneySea that’ll follow it…

In our last Beauty and the Beast Land Construction Update, we spent a lot of time going over the ~$750 million budget for this expansion, and how that stacks up to Treasure Cove at Shanghai Disneyland, Star Wars: Galaxy’s Edge, and other additions. We won’t rehash that here, but suffice to say, the trackless “Be Our Guest” dark ride in Beast’s Castle will easily be the biggest-budget Fantasyland dark ride of all-time. In fact, it very well could be the most expensive Disney ride ever, period.

The first structure you see, near Space Mountain, is the new theater. This isn’t quite as far along as the other building, but it’s also not going to house one of the most complex attractions in Disney history. It’s easily on pace to meet its Spring 2020 opening date.

To the right, nearer Toontown, is the show-building for the Be Our Guest trackless dark ride. Since our last update about 6 months ago, this building has been topped out and fully enclosed. It’s difficult to get a sense of scale from this video, but the building is massive, as is the construction site. 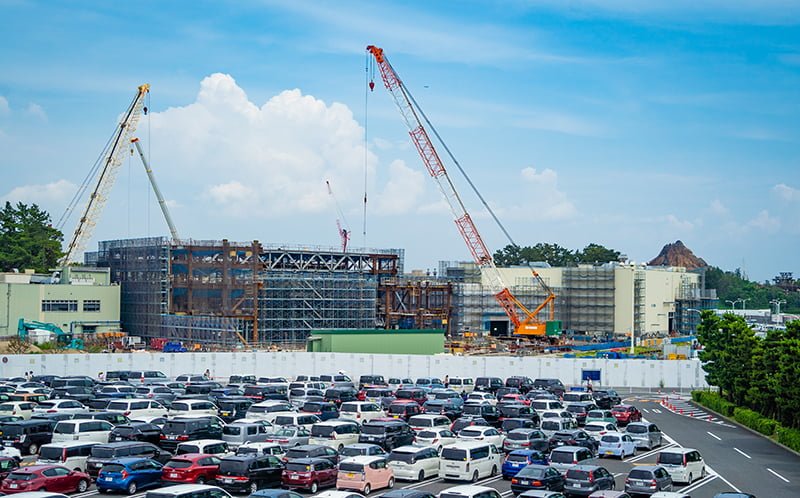 This pretty much tells the entire story of the Beauty and the Beast/New Fantasyland construction. These buildings are massive, and we’re told the show building for the Be Our Guest trackless dark ride is ~80,000 square feet. To put that into perspective, Sindbad’s Storybook Voyage is ~60,000 square feet and Pooh’s Hunny Hunt is ~50,000 square feet. (Speaking of comparisons–the new Frozen and Peter Pan boat/hybrid rides at Tokyo DisneySea will both be even larger.)

We didn’t think to get photos from within the park, but the front facades of these additions are also starting to take (structural) shape behind construction walls, and their close proximity to Toontown and parts of Tomorrowland really underscore just how necessary it was to remove Grand Circuit Raceway and StarJets. 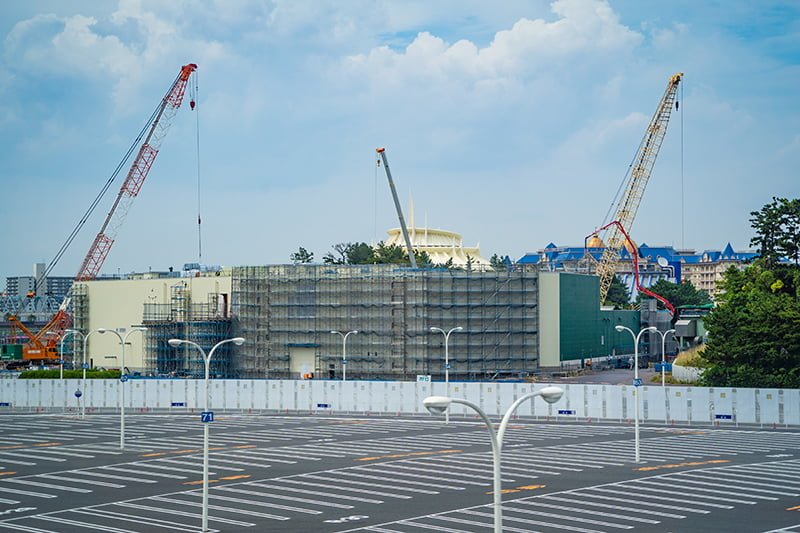 This is probably the last update we’ll do for a while on this expansion, as the show buildings are now fully enclosed and work is well underway inside, which is (obviously) impossible to see. If the Soarin’ construction is any indication, details on the facades will be fully concealed from guest view, so there likely won’t be much, if any, visible progress between now and Spring 2020. If that changes, of course we’ll be back with another update.

This is a dramatic redesign to Tokyo Disneyland’s turnstiles, ticket booths, and other facilities. The goal is to improve guest flow, which can get really backed up on weekends and holidays. This will occur via an increase in the number of turnstiles from 48 to 54 gates, a new photo recognition system for Annual Passport holders, and the installation of multi-lingual ticket vending machines. These new turnstiles will open in phases from Spring 2019 until Spring 2020.

The Tokyo Disneyland Main Entrance Project is occurring in stages, which means guests arriving via monorail are re-routed around the construction walls. On some busy mornings (namely weekends), the turnstiles are opening early to alleviate congestion. During our visit, we also experienced a new form of turnstile being tested. We have no insight into whether this is what will be used or if it’s just a temporary thing, but it was definitely faster. (Sorry, no photos.)

Now let’s head over to Tokyo DisneySea to a take a look at the Soarin’ construction: 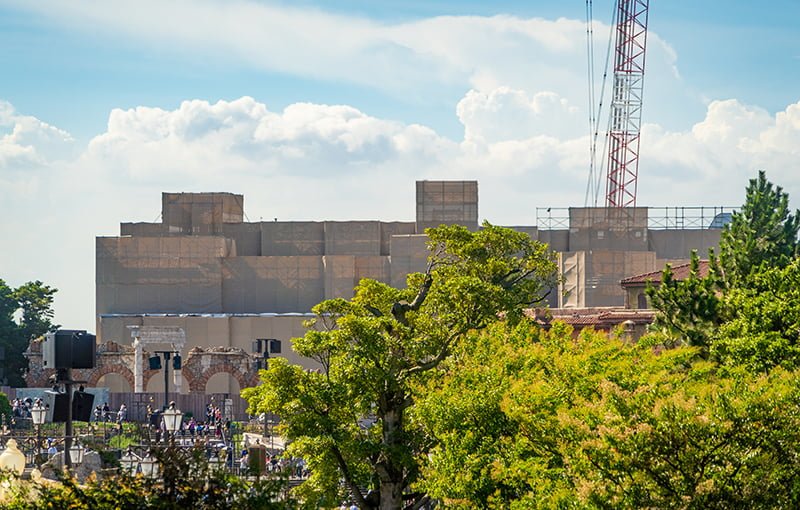 To be honest, there aren’t really any notable changes here since our last visit to Japan for the start of the Happiest Celebration a few months ago. You can see the facade taking shape via the exterior scrims, but those hide any detail-work, and that’ll remain the case until the scrims and walls come down…which won’t occur until the ride is ready to debut.

Soarin’ is slated to open next year at Mediterranean Harbor in Tokyo DisneySea. Not much is known about what the Japan incarnation of this popular attraction will entail. The original OLC press release indicated the attraction would feature “original scenes and the newest visual images” but the only concept art showed a scene from Soarin’ Around the World with new Renaissance-era flight simulators akin to Leonardo da Vinci’s flying machines.

These simulators would make the attraction fit well with nearby Fortress Explorations, but the current CGI-heavy Soarin’ Around the World ride video would definitely clash with that. We probably shouldn’t read too much into the early concept art–there’s a good chance that no video for the attraction had even been shot at that point. 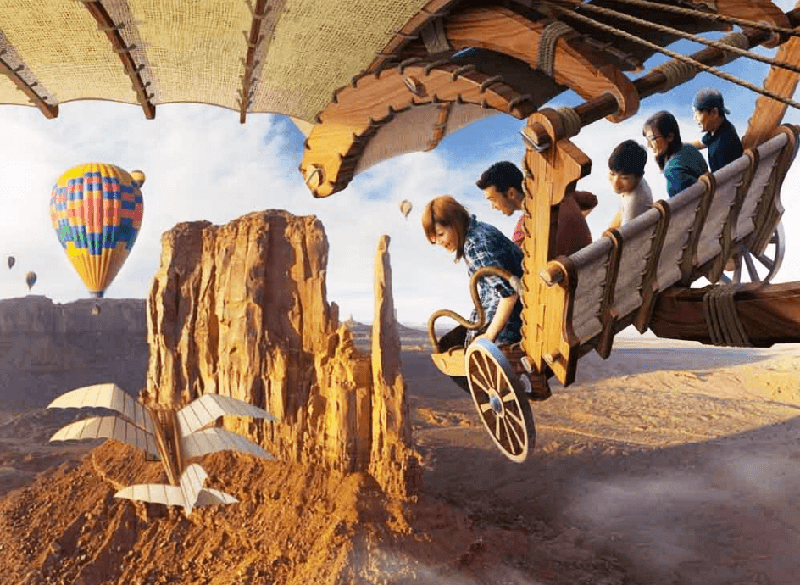 At least a modest plussing is to be expected with the Tokyo DisneySea version of Soarin.’ We wouldn’t be surprised to see an entirely new video, with a greater focus on the seas or Mediterranean. Personally, I wouldn’t mind a ride video that offered a flight over Japan a la the original Soarin’ Over California, but that seems somewhat unlikely given the port where it’ll be located. No matter what the ride video, here’s hoping it’s not simply the current version of the attraction.

As always, we’re not-so-cautiously optimistic about the Beauty and the Beast mini-land and other expansion projects at Tokyo Disneyland. For us, these are the most exciting Disney construction projects that are currently underway anywhere in the world, and we have sky-high expectations for the Beauty and the Beast stuff. About our only concern here is what this will do for attendance, especially as these additions are slated to open only a few months before the Tokyo 2020 Summer Olympics. We’re already preparing for very heavy crowds…and wait times measured in hours!

Are you looking forward to this Beauty and the Beast/New Fantasyland expansion at Tokyo Disneyland? Do you have high expectations for the Be Our Guest trackless dark ride? Looking forward to Soarin’ at Tokyo DisneySea…or the new turnstiles? Any questions? Hearing your thoughts and feedback is interesting to us, so please share below in the comments!