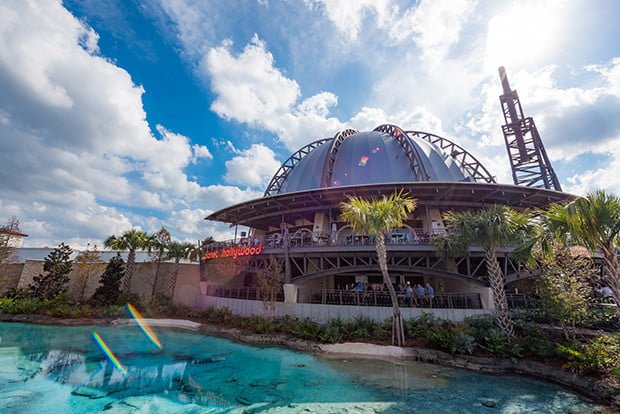 First, another “fun” edition of story time with Tom. I remember when Planet Hollywood first opened. A restaurant owned by Terminator, Mr. Die Hard, and the Cliffhanger (hadn’t seen Rocky at that point)?! It was basically my dream. I’m pretty sure my family didn’t have the chance to do so until 1996 during Walt Disney World’s 25th Anniversary.

The restaurant was still brand-new, having opened roughly a year-prior at that point. That same trip, we also dined at the Official All Star Cafe (owned by Ken Griffey Jr. and others); between those two restaurants, I was in heaven. They had everything young Tom wanted from a restaurant: large & greasy portions, celebrity endorsements, and cool stuff on the walls. I became a walking, talking endorsement for both restaurants, buying their attire and boasting to all of my friends back home how I ate at the best restaurants ever–so good that celebrities and athletes ate at them!

Times change, tastes change. The last time we returned to Planet Hollywood (on our first trip together to Walt Disney World over a decade ago), Sarah and I were both really underwhelmed. How was this the same place I loved as a kid?! This isn’t to say I’ve become a food snob.

I still love a good greasy spoon, and inventive burgers are one of my absolute favorite foods. We’ve dined at a few places Guy Fieri has featured on his shows, and generally have liked them. While Fieri himself is easy to make the butt of jokes, I think foodies too often turn their noses up at comfort foods like the ones he features. There’s definitely a place for this style of cuisine (Fieri’s own “Flavortown” concoctions are often a different story) and it’s worth judging on its own merits, rather than against haute cuisine or other dissimilar styles. 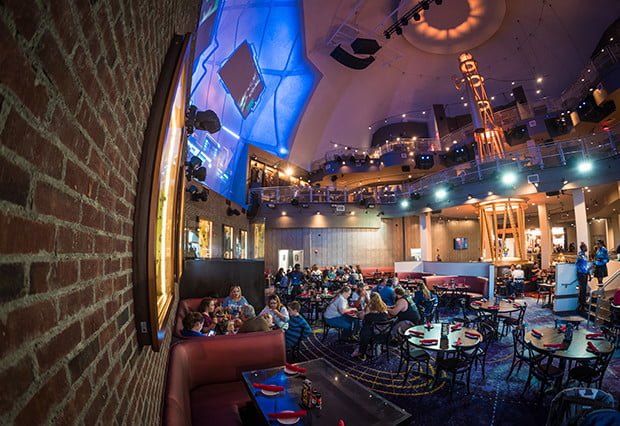 After all, different strokes for different folks. Even as fans of comfort food, we pretty much wrote off Planet Hollywood Observatory as being not for us after seeing the menu. No big deal. With few exceptions, we don’t experience and review things that seem like they won’t appeal to us. (It’s one of those rare situations where having lemmings contributors to do our bidding assist with things for the blog would come in handy.) 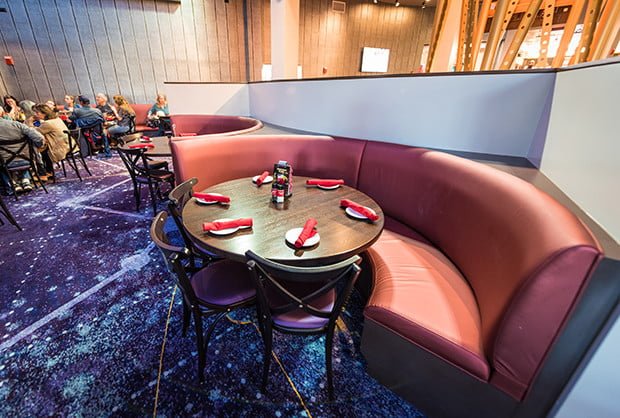 Let’s cut to the chase. While the theme of Planet Hollywood has arguably been improved simply by virtue of covering over the faded blue and star-covered dome with grey tarps, it was really disappointing to see the design team only went halfway.

The creative team for Disney Springs clearly visited The Americana (in Glendale) and The Grove (in Los Angeles)…why couldn’t they have driven a few miles down the road to check out Griffith Observatory?! In actuality, I know this was probably more a matter of whatever group now owns Planet Hollywood Observatory not wanting to shell out the money than the design team not understanding what an observatory looks like. Either way, the results are incredibly disappointing. 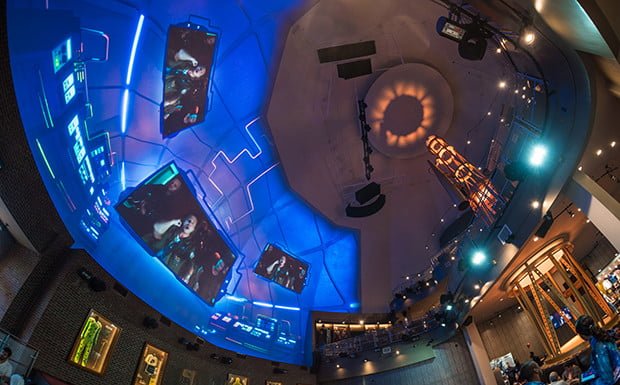 Basically, the “finished” product inside is a combo of Hollywood memorabilia and stargazing stuff. Oh, plus contemporary pop music videos (as we walked in, Goo Goo Dolls’ “Name” was playing, which seemed apt) that are inexplicably projected onto the dome ceiling. 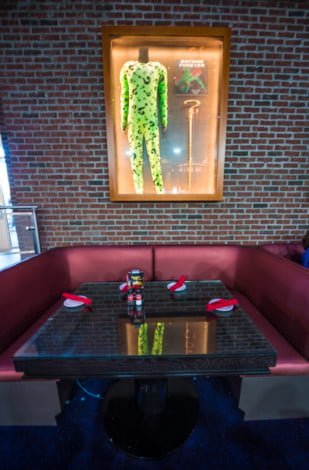 You know the phrase “addition by subtraction”? Planet Hollywood Observatory could use a huge helping of that. Cut the music videos and loud music, relocate all the celebrity collectibles into a single room (or buried in a time capsule), project some constellations on the ceiling (preferably including a “hidden Christopher Walken” among the stars), and bathe the whole place in deep blue lighting. 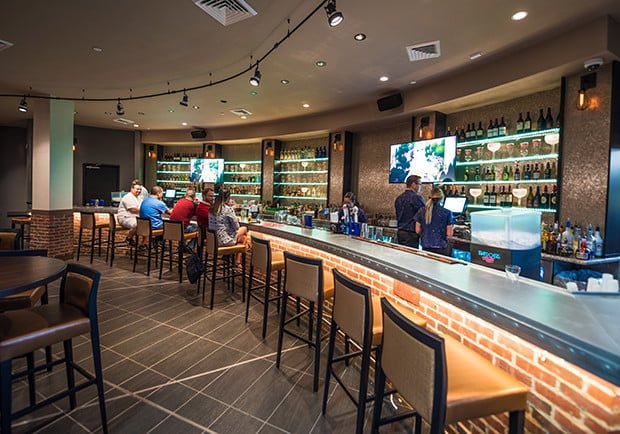 None of that would be prohibitively expensive. Moreover, it would simplify Planet Hollywood Observatory’s theme and make it something coherent to guests.

It wouldn’t be the best theme ever, but it’d be a heck of a lot better than what’s there now. 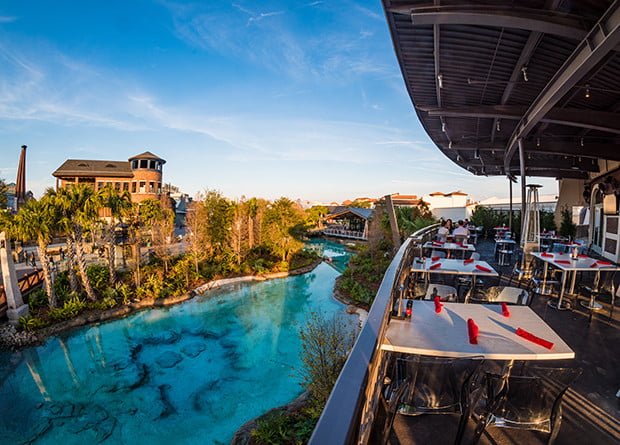 As it stands, we recommend avoiding the inside entirely and requesting a seat on the balcony overlooking the springs (unless you’re visiting during one of Florida’s hot and humid months). That’s what we did, and it was infinitely more enjoyable. 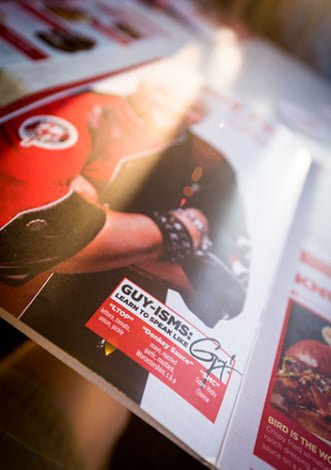 One acronym that is oddly missing from Fieri’s lexicon is “DB,” which is what one becomes when speaking in Guy-isms.

Now, on to the menu and what we ordered… 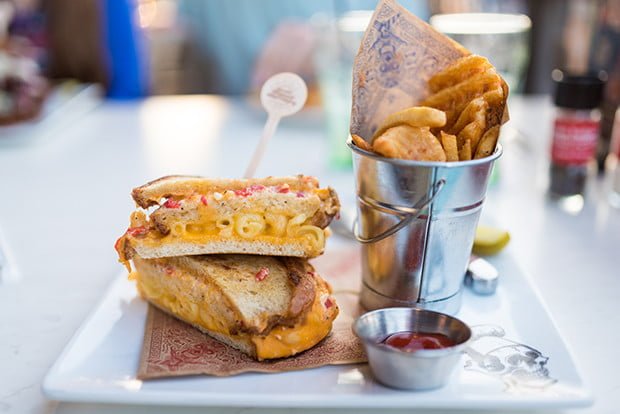 Per Josh’s recommendation, I ordered the Pimento Grilled Cheese. This was better than expected. It certainly didn’t have any subtlety, hitting you over the top with a pronounced cheesiness. 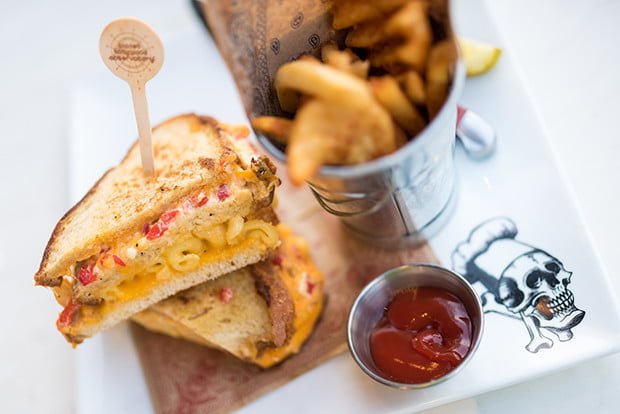 The garlic-buttered sourdough bread was good, and the variety of cheeses in between made for an interesting flavor. It was ultimately too rich for me to finish, but as something to split or an over-the-top indulgence, it’s a decent option.

If I were in the unfortunate predicament of being forced to eat at Planet Hollywood Observatory again, I’d play it safe by ordering this. It’s in no way something I’d seek out–but it’s one way to make lemonade out of lemons. 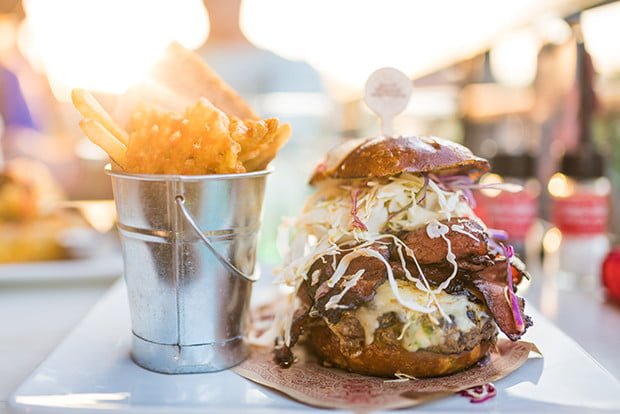 Sarah opted for the Mayor of Flavortown Burger. This was a huge burger topped with grilled pastrami, Swiss cheese, slaw, etc., all on a pretzel bun. Now, I’m all for inventive burgers, but this monstrosity was obnoxiously large. 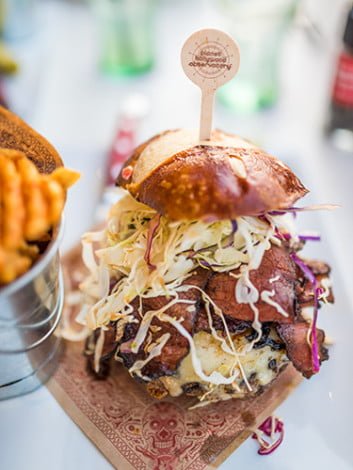 More importantly, the ingredients here didn’t fuse together to compliment one another. It was just a lot of stuff for the sake of a lot of stuff. MOAR STUFF!!!1!! seems to be a common trend with Fieri’s cooking.

We had dined at D-Luxe Burger earlier in the day, and both agreed that we preferred the burgers we had there (at just over half the cost). We would avoid this unless you dislike your taste buds and/or want to play “heart attack roulette.” 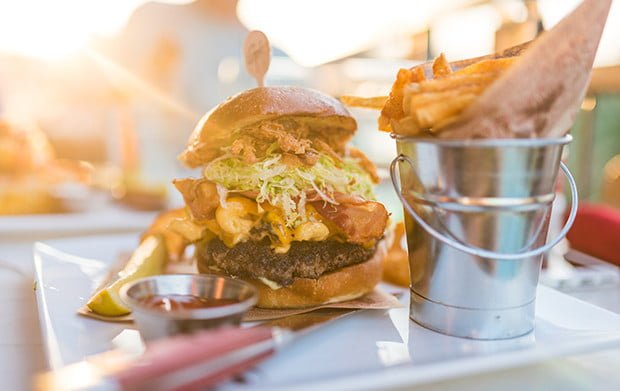 My parents–the reason we dined at Planet Hollywood Observatory to begin with–chickened out and decided to split the Bacon Mac-n-Cheese Burger. In their defense, perhaps they aren’t ready to live in the fast lane of Disney blogging and eat three full meals before 6 p.m.

They were not impressed. I think they found the burger to be “fine” but nothing special, and certainly not worth the high price tag. On the plus side, this oversized mediocrity was easily large-enough to share. 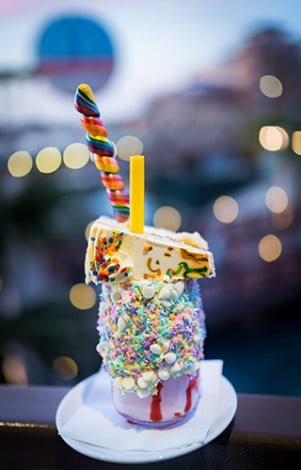 For dessert, I ordered the Fargo’d Clown Milkshake Strawberry Big Bang. Unless you’re in it for the Instagram photos, this is a complete waste of money. What arrived was somewhere in between actual food and a fake prop food you’d see in a restaurant display.

The shake “dripping” down the side was a hard glaze of some sort, and the cake was hard and dry (necessarily, I guess, to stay perched on top?). Not something fit for human consumption. The milkshake inside was fine, but it was the only aspect of the dish that was edible. Still, it was smaller and not as good as a milkshake that would cost one-third the amount at 50’s Prime Time Cafe. 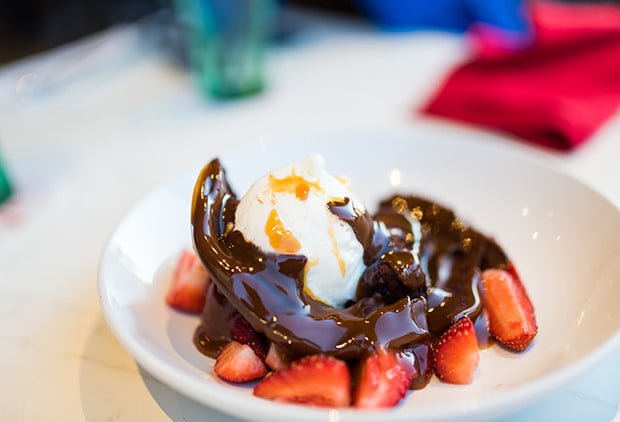 My parents shared the Planet Meltdown, which is a chocolate sphere with a tableside presentation. They thought this was okay, but I suspect for the price ($15) you could have a better dessert elsewhere.

One final bit of insult to injury? On the way out, Planet Hollywood Observatory staff didn’t allow us to exit the way we entered, instead directing us to exit through the gift shop. It’s not 1996. No one wants this crap.

Overall, you could say Planet Hollywood Observatory exceeded our expectations, but that requires some serious spin. “Better than expected” is true here, but so too is “but really low expectations” (and my emphasis would be on the latter). All things considered, Planet Hollywood not a restaurant we would recommend to anyone but charter members of the Fieri Fan Club. Even if you are after comfort food (or “Fieri Flavortown” style) and order the best items on the menu, the theme (that assumes it has a theme in the first place, which is a stretch) is a garbled mess. Beyond that, Disney Springs has become something of a culinary mecca at Walt Disney World and you can do better in terms of similar cuisine elsewhere. If you want better burgers at a lower price point, go with D-Luxe Burger. If you want comfort food dishes, Homecoming is a far superior alternative. Even if you literally coat everything with sugar (or smother it in sauce), there’s no sugar-coating it: Planet Hollywood Observatory is one of the worst restaurants at Walt Disney World. Now that you know how we feel about Planet Hollywood Observatory…how do you feel about it?