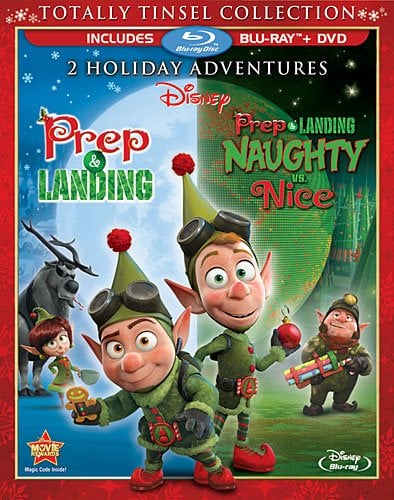 Disney’s Prep & Landing and its Naughty v. Nice sequel can already be fairly described as Christmas classics. The movies tell the modern-day story of what goes on behind the scenes before Santa Claus arrives at a child’s house. An elf named Wayne, voiced by David Foley, who is just one of many members of the Prep and Landing team. Their mission: “Get In. Get Out. Never Be Noticed.” The two episodes (for lack of a better term) tell different stories involving this team, both of which are incredibly solid Christmas specials. They’re not feature length films, but they’re still very good.

Last year the first Prep & Landing was released only on DVD, and I cautioned at the possibility of a double-dip. Sure enough, there is a new release this year, this time on Blu-ray with the sequel included. Video quality is obviously better thanks to the move to Blu-ray, as is audio quality, but they are not film quality. These are television specials, after all, and they were produced with the limitations of TV in mind. The video quality is generally sharp and has punch, with some slight artifacting at times. Audio sounds great thanks to the DTS-HD Master Audio 5.1 track, especially the opening Christmas Song.

There are some extras (a 7 minute short titled Operation Secret Santa, a 7-minute collection of commercials, promo spots, North Pole News, a few incredibly cool Kringle Academy training videos, and a couple other shorts–all totaling less than 30 minutes) but not a whole lot. They’re worth watching once, though.

In total, you’re looking at just over an hour of entertainment from this Blu-ray. Wisely, Disney has priced it below its other titles, but the fact remains that you’re still going to pay ~$15-20 for a Blu-ray of television specials that you might have on your DVR or will probably be able to watch on TV for free. If you’re a fan of Prep & Landing or have kids who will want to watch these over and over again, this new set is probably worth a purchase. Everyone else might be better off just catching them when they appear on TV this year.

Purchase Prep & Landing: Totally Tinsel Collection Blu-ray from Amazon by clicking here! Share your thoughts about this release in the comments!