Prime lenses are fixed-focal length lenses that don’t zoom. While most of the photos I post here on the blog are taken with wide angle lenses, I also really enjoy using prime lenses in the parks for the way they can isolate a subject and for their overall sharpness. Prime lenses are great “storytelling” lenses, and at Walt Disney World or Disneyland, there’s always a story to be told!

The purpose of this post is to give you some ideas for ways to use prime lenses in the Disney theme parks, along with some of my thoughts as to why I used a particular lens for the shot.

What this post isn’t about is gear, but I do want to touch upon it briefly. The most cost-effective option is the 50mm f/1.8 made by just about every manufacturer. The Canon and Nikon versions of this lens only cost about $100. Not too shabby for a great-performing lens.

Okay, now that we have that shop talk out of the way, let’s look at how prime lenses can be useful in the Disney theme parks!

Getting the obvious one out of the way first, Disney dark rides almost require that you have a prime lens for great photos. I do use other fast lenses from time to time, but my go-to lenses on dark rides are primes. Their f/1.8 or f/1.4 apertures allow more light to hit the sensor, and in dark situations, especially ones that move like these rides, you need more light and faster shutter speeds. For more tips on photographing the Disney dark rides, I highly recommend reading my Guide to Disney Dark Ride Photography, which gives all the technical (and some creative) tips that you need.

When photographing subjects on dark rides, remember to keep everything you want in focus on the same plane. If one subject is behind the other, it will be out of focus. Waiting until I passed this scene (and turning back) allowed me to capture both the pirate and woman in the barrel in focus.

Some of the best dark ride photos also tell a story, in this case, the guests’ competing with one another on Buzz Lightyear’s Astro Blasters.

To have any hope of capturing many scenes in rides like Haunted Mansion and Peter Pan’s Flight, you need a prime lens. There is no alternative, save for a ride stoppage.

Theme parks are great for portraits, both of your family and of Cast Members, characters, and other life-like “things.” While I prefer good natural lighting for portraits, if your lighting is not good, make sure to use a flash. 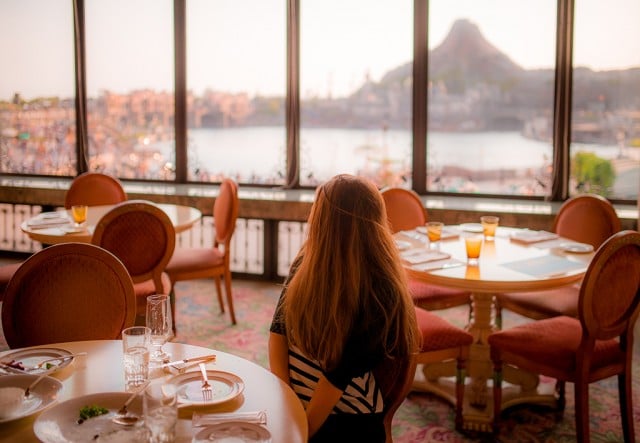 Not every portrait needs to be a “smile at the camera” type of shot. In the Disney parks, I like doing what I call “environmental portraits,” that focus on a person, but also show some elements of the parks. Here, Sarah looks out the window of the BellaVista Lounge at Mount Prometheus in Tokyo DisneySea.

Using a prime lens enabled me to isolate this Tokyo Disneyland Haunted Mansion Cast Member from an otherwise distracting background. (Although I should have positioned the brick gateway so it’s not directly behind her.)

Portraits don’t just have to be of people! This portrait of the Stitch topiary taken at f/1.4 benefits from having Stitch isolated from his background.

Nothing makes for a better portrait than a goat. With all portraits (goats included) focus on the eyes. Other parts of your subject can be slightly out of focus, but the eyes should be crisp. Most photographers like good focus from the tip of the nose to the eyes. That’s a good rule for humans, but with long-nosed creatures like goats, it can be broken.

Pretty much every nice or themed restaurant has lower lighting, meaning you either need a flash or prime lens for good photos of food. I find using flash in a restaurant to be rude, plus I like food photos that focus on a specific part of the dish, so I tend to use prime lenses for food photography. 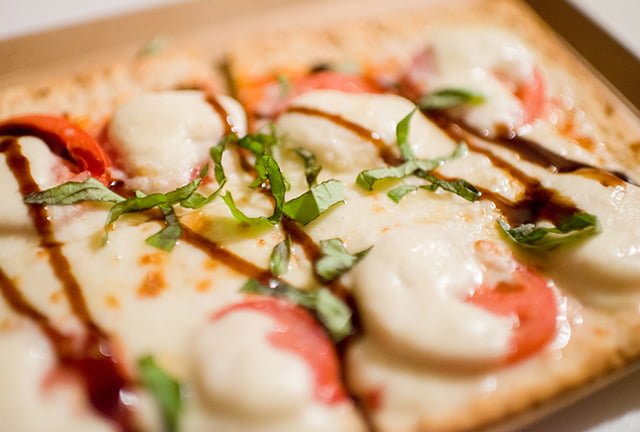 Isolating parts of a particular dish can give food photos a more dynamic and artistic look than just plain, straight-on shots. 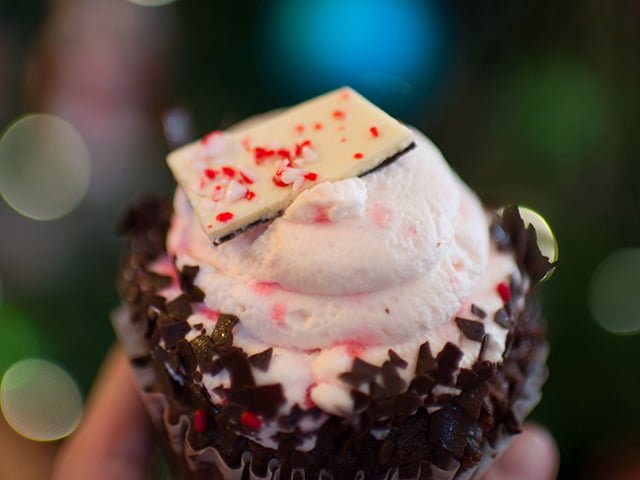 Sometimes using a prime lens can make a food photo more interesting. In this case, I held up my cupcake (side note: this cupcake is awesome) in front of the Christmas tree at Disney’s Boardwalk Inn to get some light bokeh in the background. I also got some awkward looks! 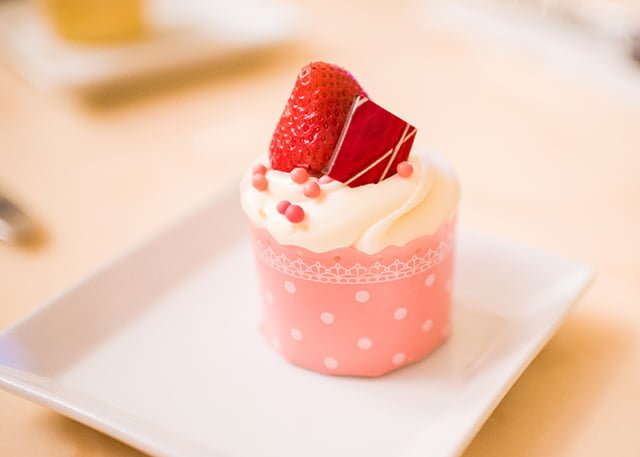 In restaurants like Be Our Guest Restaurant, the lighting is so dim that without a prime lens, it’s nearly impossible to photograph food.

The Disney theme parks are all about the details, but these details can get lost as we rush from attraction to attraction. Good photos can be made by focusing on some of these smaller things that demonstrate just how much attention goes into every aspect of the parks.

This is a display in Epcot (France, World Showcase) that most people rush back. However, when isolated with shallow depth of field, it’s attention-grabbing in a photo. Getting closer still to focus on specific details inside the case would make for another interesting photo.

The rose in Be Our Guest Restaurant is isolated by the f/1.4 aperture. I also positioned myself so that the tattered curtain was out of focus in the foreground to frame the flower (and add a storytelling element, I suppose).

Pieces of merchandise are great photo subjects with prime lenses. For this photo, I positioned myself so that Christmas lights behind Mickey would fill the background with bokeh. The other plus side to photographing merchandise? It’s cheaper than buying it! (Now you can’t afford not to get that new prime lens! ;))

Flowers and plants are everywhere, and using a prime lens (in this case, a dedicated macro lens in the Rose Garden) to focus on them can be a great way to take beautiful photos in the Disney parks that have nothing to do with Disney to the casual observer.

There are statues all over Walt Disney World, and tight photos of them plus interesting “hinted at” out of focus backgrounds can make for nice photos.

These lamps and 30th Anniversary banners at Tokyo DisneySea are gorgeous, but without using shallow depth of field to isolate them, they’d get lost in the sea of awesomeness.

The Disney theme parks are designed in ways that tell stories. As cliche as it might sound, just about everything in the parks–from windows to statues to queues, everything is arranged in such a manner to contribute to overarching story, or to tell its own story. This is story in the loose sense of the word, not anything strictly linear. This can be difficult to capture in a single photo, but many great photos do tell a story (there’s another cliche for ya!).

Here, the goal was to frame the shot in such a way that it’s clear Jiminy Cricket is looking up at Pinocchio, but with the sole focus being on Jiminy Cricket. A photo with greater depth of field would have been too busy.

The wide open aperture used here highlights Minnie, who stares loving at Mickey Mouse. Since there is so much going on in the background, a photo with greater depth of field would having competing points of interest (Cinderella Castle, Partners, Minnie Mouse). Here, it’s clear Minnie is the focal point, with her attention on Mickey.

These awesome Mickey’s Christmas Carol vignettes on Main Street themselves tell a story, but by focusing on certain parts of them, you can “direct” that story, so to speak. In this case, the emphasis is on Donald Duck, looking in on what could have been.

This shot sort of lifts the curtain to tell the story of how Disney juxtaposes contrasting elements (in this case, Americana and a fairytale castle) in a manner that normally works. Or something like that.

I used a shallow depth of field and creative framing to tell the (fictional) story of a quiet castle at the end of a long garden. Storytelling photos don’t have to tell the actual story of what you see in a scene. By getting creative with your positioning and depth of field, you can create your own “story.”

I love shooting into the sun and using a small aperture to create sunbursts. I also love using a wide opened aperture to give the sun a very soft, almost ethereal look. Here I shot into the sun using an aperture of f/1.4 to soften the light.

Night photos, including fireworks, are great with prime lenses. With a stopped down aperture of around f/8 to f/11, prime lenses are typically sharper than any other lenses.

If you use an aperture of around f/16, most prime lenses will produce beautiful starbursts, making night photos of lights even prettier.

Wide open apertures also make it much easier to capture handheld night photos. In Tokyo DisneySea, this is critical, as tripods are not allowed to be used! Here, by using an aperture of f/1.4 and shutter speed of 1/30th of a second, I was able to keep my ISO at a reasonable 1100.

This post presents just a few of the ways you can use a prime lens at Walt Disney World or Disneyland (or in Tokyo, Paris, Hong Kong, etc.) for creative results. A lot of Disney fan photographers think that using only a “Prime Lens Day” forces you to think more creatively, and can really give you a lot of great photos. While I have never been brave enough to try this myself, it sounds like a great idea for anyone who has the courage. At the very least, it would allow you to travel light for the day!

Do you own a prime lens? Which one? What are your favorite ways to use a prime lens in the Disney parks? Hearing from you is half the fun, so share your thoughts or links to your photos in the comments!