Disney’s press release goes on to discuss the “value” and “flexibility” of a Disney Vacation Club membership, along with other fluff you’d expect in a press release of this nature. My favorite little gem was this one: “fun and even surprising accommodation types that families will find irresistible.” So get yourselves hyped for some irresistible accommodations! (Note: prices may be very resistible.)

June 14, 2020 Update: Three months after the parks closed and all construction stopped at Walt Disney World, a new rumor has emerged via WDWMagic that Reflections – A Disney Lakeside Lodge has been cancelled and construction crews have been on site removing concrete and rebar.

Additionally, in a recent aerial photo of the Reflections – A Disney Lakeside Lodge site on Twitter from @bioreconstruct, shows a noticeable absence of construction equipment, which is despite other projects around Walt Disney World starting to resume work. Perhaps more significantly, grass seed has also been sprayed over a large area of the Reflections site–not exactly something that would happen if work to resume imminently. Here’s a look at that:

Apologies for the skid in this aerial. A nearly straight down view of Discovery Island and site of Reflections – A Disney Lakeside Lodge. Zoom in at arrows to see where a refurbishment is underway of the waterside nature trail. pic.twitter.com/PPbNP0vPhA

We cannot speak to the veracity of these rumors, but find them to pass the smell test. Back in our All Construction Has Stopped at Walt Disney World from a few months ago, we assessed the likelihood of particular projects being shelved or delayed. We viewed Reflections – A Disney Lakeside Lodge as “the project most likely to be outright cancelled or at least postponed indefinitely. At minimum, I’d be surprised if Reflections — A Disney Lakeside Lodge opens before 2023.”

It has yet to go vertical, meaning it’s not even as far along as Pop Century’s Legendary Years was when that project hit the pause button for nearly a decade. Disney Vacation Club already has a lot of unsold points, and a recession makes those more difficult to sell. On top of that, there’s a strong possibility that foreclosures will outpace new sales, meaning that DVC’s point inventory will start increasing. Then there’s the possibility that DVC will need to exercise right of first refusal to buoy resale values.

I don’t normally get excited about things not happening, but I’m personally ecstatic about Reflections – A Disney Lakeside Lodge being (potentially) cancelled. I cover the why of that in full detail below, and feel even more strongly about this after being utterly underwhelmed and disappointed by Disney’s Riviera Resort.

With that said, I’d still expect the River Country site to be developed at some point down the road. Even before this announcement, the River Country plot was rumored to be the “next” Disney Vacation Club resort several times, and actual plans for previous incarnations of the project leaked about a decade ago. Those were all subsequently put on hold for expansion at existing Walt Disney World resorts, and it seemed like the defunct water park’s time had finally come with Reflections.

That now may not be the case, but this area will eventually be developed. Probably not this year or next, but likely within the next decade. Here’s hoping it’s with a concept superior to what was announced and shown for Reflections – A Disney Lakeside Lodge! Now, for my original commentary on the project… 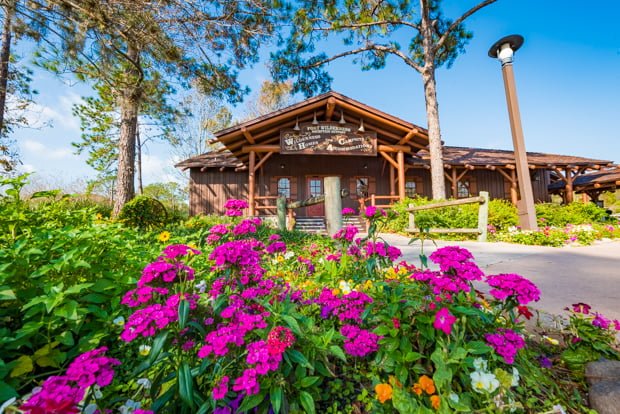 I love Wilderness Lodge and Fort Wilderness. I’m a Disney Vacation Club member. In theory, Reflections – A Disney Lakeside Lodge seems perfectly tailored to some of my favorite things about Walt Disney World. I want to love the idea of the River Country parcel finally being redeveloped, instead of rotting in plain sight. I’m truly hopeful for the best here.

Unfortunately, like pretty much every Fort Wilderness fan, I’m very apprehensive about this Disney Vacation Club project (well, mixed-use, but presumably mostly DVC). Part of what makes Fort Wilderness special is that it’s been relatively undisturbed by time, and is one of the last bastions of “Vacation Kingdom of the World” era of WDW.

It’s almost remarkable how different Fort Wilderness feels from the rest of Walt Disney World—even its neighbor, Wilderness Lodge. It’s almost as if Walt Disney World leadership has forgotten about Fort Wilderness, and it hasn’t seen the same fiscal mandates, changes in emphasis, or character as every other resort over the last couple decades. In large part, it’s been doing its thing, more or less unchanged since the 1990s.

There’s a very legitimate concern, especially after seeing how the Copper Creek and Boulder Ridge projects at Wilderness Lodge unfolded, that any expansion at or around Fort Wilderness will destroy the primitive and secluded characteristics of the campground that give it so much appeal. After all, this is a campground with wilderness right in the name–the environment is the heart and soul of Fort Wilderness. 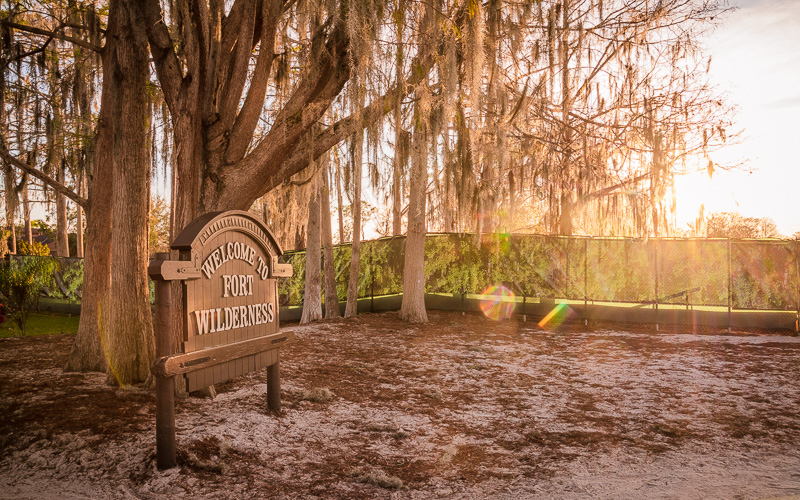 The development of Reflections – A Disney Lakeside Lodge doesn’t necessarily have to destroy the tranquil and secluded atmosphere of Fort Wilderness, but that seems like a very distinct possibility. Disney’s recent approach to developing hotels adjacent to existing resorts doesn’t inspire much confidence, and if there’s a ham-fisted approach when clearing land or an overzealous mentality when it comes to the size or proximity of the resort to the campground, it will be incredibly detrimental to Fort Wilderness.

As for the design, only one piece of concept art has been released, and it’s nothing special. I don’t want to rush to judgment here, as I think there is potential for this to end up being interesting once more is released, but right now it looks like a generic airport hotel with some modern rustic flourishes.

On the plus side, Wimberly Allison Tong & Goo (WATG) is the lead designer for Reflections – A Disney Lakeside Lodge, and they have a very good track record with Disney. They designed the original Grand Floridian Resort & Spa, along with Disney hotels in Tokyo, Paris, and Hong Kong.

If this were a decade or two ago, I might be more deferential to Disney with regard to this concept art. However, the last several years have shown that Walt Disney World is very hit or miss with resort development and redesigns, skewing towards boring designs. It seems the approach is to choose the most middle-of-the-road offerings as possible so as to not alienate those with bland tastes. 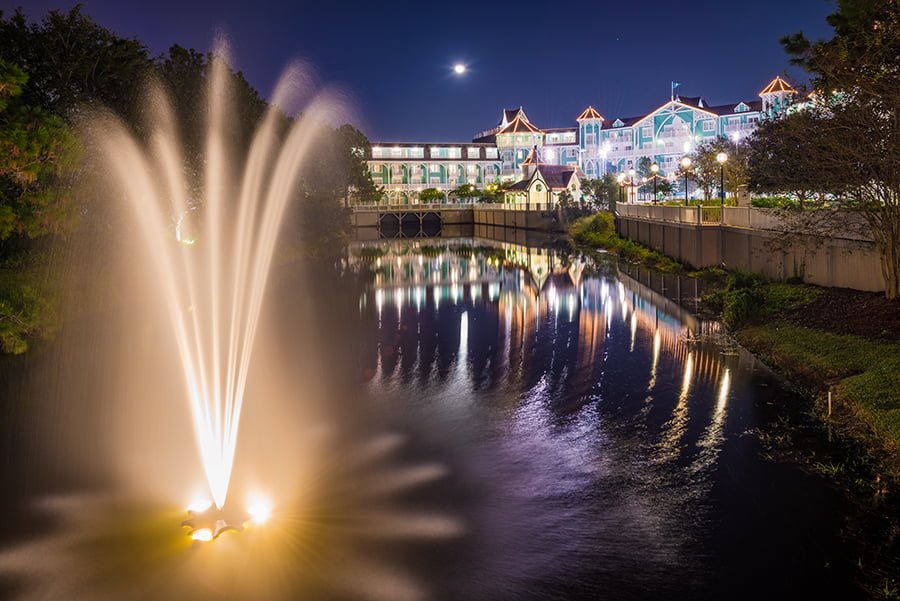 When you compare Walt Disney World resorts built before the mid-1990s to ones built or redesigned in the last few years, there’s generally a clear division. Contemporary projects are often interchangeable with real world Holiday Inns or other mid-tier chained brand hotels.

Look at the difference between BoardWalk Inn or Beach Club and the new casino tower at Coronado or the Fairfield Inn Des Moines Airport Riviera Resort. One explanation is that Disney wants to make things as crowd-pleasing as possible so as to not alienate any potential customers. (The thing about this approach is that when you try to appeal to everyone, you end up appealing to no one.)

Another explanation is that Imagineering’s talents are spread too thin. I know some readers might only follow the projects at Walt Disney World, but every single property (except Shanghai Disneyland) around the world has huge projects–many larger in scope and scale than Star Wars: Galaxy’s Edge–in various stages of development or construction.

In the past when less was occurring simultaneously, maybe some top-tier Imagineering talent who “got” Disney’s distinct approach to hotels worked on a resort project. Now? Maybe they’re mostly designers who view working for WDI as “just another job” no different than Best Western or IHG.

Along those same lines, with so many projects in development, it’s entirely possible–if not probable–that leadership in the Parks & Resorts division is trying to trim the budget from each one, cutting aspects or details viewed as superfluous. We’ve commented on this before with regard to the Skyliner stations and their utilitarian styles that don’t match the surrounding architecture (most notably the International Gateway station), but it’s also evident in recent hotel concept art.

The problem is that those leaders are note creatives, and their experience is often in consumer products or other division of the company. They have absolutely no insight into what details are actually superfluous, and what are necessary for reinforcing theme or creating a sense of immersion.

In the end, more concept art could be released that’s really good. The project could employ a deft hand when developing around Fort Wilderness in a way that doesn’t damage that landscape. (Disney, just think of how much you could pat yourselves on the back by utilizing eco-friendly and sustainable construction practices–it’d be worth it in the PR alone!) It could end up being really good–a true tribute to both Walt Disney’s love of nature, but the spirit of River Country, which was never coming back anyway.

Color me skeptical. I think it’s far more likely that we’ll get a generically modern and vaguely rustic design that would be at home in Holiday Inn’s portfolio. It’s also more likely that instead of eco-friendly construction that preserves the natural beauty and wilderness of the area, we get excessive tree clearing for the construction, and an end product akin to Copper Creek and Boulder Ridge in terms of wide walkways and bare grounds. But don’t worry! It’s likely that the interior will be decorated with photos of Walt in nature, nods to the True–Life Adventures, and perhaps a clever reference to River Country…and fans who don’t know the difference between superficial decorations and actual theme will eat it all up.

Are you optimistic or pessimistic about Reflections – A Disney Lakeside Lodge? What do you think of the potential of this and other new hotels at Walt Disney World? Any other questions or comments? Hearing your feedback is part of the fun, so please share your thoughts below in the comments!