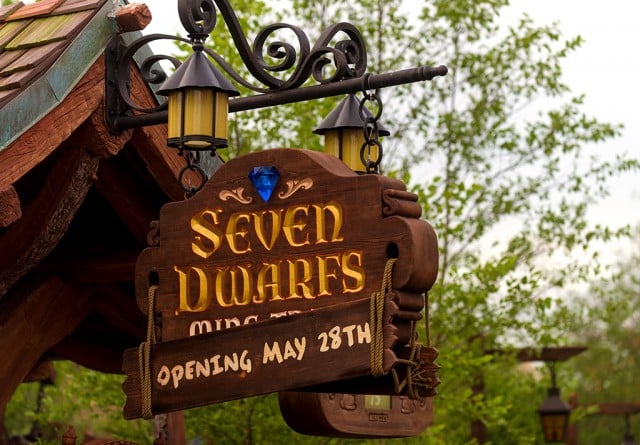 Throughout the construction and opening of New Fantasyland, I’ve sort of been of two minds about it. It seems that for everything that has been done really well, something else has been done poorly. Under the Sea ~ Journey of the Little Mermaid is a perfect example. The exterior and the queue are absolutely stunning, but the wheels fall off in the actual attraction, which follows the formulaic “condense the full story into 4 minutes” plan, while feeling more or less like a slightly updated standard dark ride.

Seven Dwarfs Mine Train is no different. Well, it is different to the extent that I really, really like this attraction, and think it will go down as a classic Magic Kingdom attraction; it’s no different to the extent that I think it has some flaws of its own. Since, overall, I am very pleased with Seven Dwarfs Mine Train, let’s get those flaws out of the way so we can focus on its positives.

First, the attraction is short in duration. I realize there was a limited footprint of the meet & greet experiences it was replacing to work with, but after my first ride on Seven Dwarfs Mine Train, I was really left wanting more. The last attraction I felt this so strongly on was Journey to the Center of the Earth at Tokyo DisneySea, but unlike there were duration is fine and it’s more an issue of pacing, I feel like Seven Dwarfs Mine Train is perfectly-paced, but is just a tad lacking in substance. Whether that be a little more outdoor track or another indoor show scene doesn’t make a huge difference to me, but it’s just all over too quickly. I’m not expecting some whirlwind 14 minute attraction through the Dwarf universe, I just want a little more–maybe 60-90 more seconds total.

When comparing this to the last big attraction to open in the United States, Radiator Springs Racers at Disney California Adventure, I feel like Seven Dwarfs Mine Train got short-changed in this department. Both are similar in terms of thrill components and dark ride scenes, but Radiator Springs Racers has more of both, and feels more satisfying in the end as a result. In fairness, Radiator Springs Racers was the big addition to a faltering park desperately in need of something substantial, whereas Seven Dwarfs Mine Train is just one piece of an already solid Magic Kingdom lineup. Regardless, I think the most-visited Disney theme park in the world could have similarly benefited from a brand new flagship attraction. As built, I feel Seven Dwarfs Mine Train is just too short to earn that Walt Disney World flagship (or E-Ticket, whatever you want to call it) designation. On the plus side, it says something about the quality of the attraction that I so badly wanted more of it. Barnstormer feels like it’s about the same duration, but on the rare occasions that I subject myself to it, I’m indifferent to it being over so quickly.

Second, Seven Dwarfs Mine Train, for all of its beauty and detail, feels partially undone. While the queue and load area are flush with little details, these same little flourishes seem absent from the outdoor portions of the attraction. Additionally, and maybe this is the photographer in me, but the mountain just doesn’t have that same beauty at night that the other Magic Kingdom mountains have, and the big thing missing is exterior lighting on the mountain itself. I was fully expecting a two-tone lighting with the lower portions of the mountain illuminated in an orange color and the grassy upper portion illuminated in green. Instead, the only nighttime lighting comes from light fixtures in the queue, deep blue lighting on Snow White’s cottage, and a couple of spotlights here and there. Otherwise, the lighting is either uninteresting or altogether absent. While ride duration is not something that can now be adjusted, Disney certainly can make lighting changes, and I really hope this happens. For an attraction that is otherwise the bright spot in New Fantasyland, it sure is an uninteresting dark spot at night.

While I view both of these things as fairly major complaints, make no mistake about it, I absolutely love Seven Dwarfs Mine Train. It is far and away the gem of New Fantasyland in my estimation. What’s so great about it? 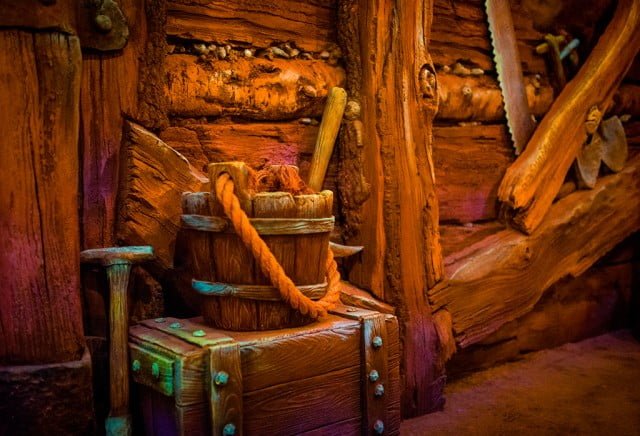 Let’s start with the queue. It’s beautiful. From great light fixtures (you know how much I love those!) to excellent landscaping that offers glimpses of the attraction and other areas in Fantasyland, to beautiful caverns, the Seven Dwarfs Mine Train’s queue is fantastic. Even the interactive games are well done, and add to the queue, rather than detract from it. Next is the load area and vehicles themselves, both of which continue the trend of incredible detail. Seriously, these ride vehicles look meticulously crafted out of real wood.

Prior to opening, I think a lot of people felt that the show scenes would pretty much be the make or break part of the attraction. For me, they absolutely make it. These Audio-Animatronics are modern beauties that move with incredible fluidity and look exactly like you’d expect Audio-Animatronics from an animated film to look. This first area sparkles as it offers a glimpse into the world of mining. Much like Cars Land makes you feel you’ve stepped onto the ‘set’ of Radiator Springs, this scene makes you feel like you’re actually on set with the Seven Dwarfs inside the mine.

However, it’s not this first scene that gives me chills. It’s just after that scene and up the next lift hill that is the ‘goosebumps’ moment of the attraction for me. It’s hard to get into this without retaining the “spoiler-free” status of this review, but it is a really simple scene. Despite that, it’s a brilliant effect for the lift hill and is one of those moments where you can’t help but smile and hum (or sing) along. For me, this is what gives Seven Dwarfs Mine Train a lot of heart.

The other show scene at the conclusion of the attraction is a great surprise, and really ties everything together neatly. This scene is certainly not better than the main show scene earlier in the attraction, but it is the perfect way to end it, and also foreshadow what happens next in the actual story of Snow White. Also, kudos to Disney for not going back to the tired well of condensing a film into 3 minutes for the sake of an attraction. I hope someone high up has finally realized that it just doesn’t work.

Since it’s a hybrid coaster/dark ride, there are also, obviously, coaster elements in addition to these dark ride scenes. Before and after the main show scene you glide around on some mild areas of outdoor track, which isn’t really high on thrills but does offer some excellent views into both areas of Walt Disney World’s Fantasyland. Seven Dwarfs Mine Train is on a prime piece of real estate for such views, and I especially loved these glimpses of Fantasyland at night.

This is one of two things that might stick out that you might notice aren’t drawing criticism from me. No, Seven Dwarfs Mine Train is not very thrilling. No, I don’t even remotely view this as a problem. I do think it bears addressing, as in talking to some friends, I noticed it was a chief complaint. Judging any Disney attraction primarily on its thrill level is like reviewing a Marvel film based on how grounded in reality it is. In both cases, you’re sort of missing the point. If thrills are a priority, you’re going to the wrong theme parks. Other parks do them far better and charge significantly less for admission than Disney.

I’m not suggesting that the Disney theme parks should be devoid of thrill rides, but that’s not really Disney’s focus or priority, and it never has been. What Disney parks do best is immersive attractions that can be enjoyed by a range of guests. This isn’t to say that Space Mountain, Disney Junior: Live on Stage, or other demographic-specific attractions have no place at Walt Disney World, but when I see people rushing from thrill ride to thrill ride without doing (what I consider) the tamer, pinnacle attractions of Walt Disney Imagineering, it’s a bit disheartening. Still, I understand that when an attraction is a rollercoaster, it’s expected to feel like a rollercoaster. For a rite of passage coaster, I think it has an absolutely acceptable thrill level. If thrills are really that important to you, request the back–it definitely felt more “intense” to us when we were back there. 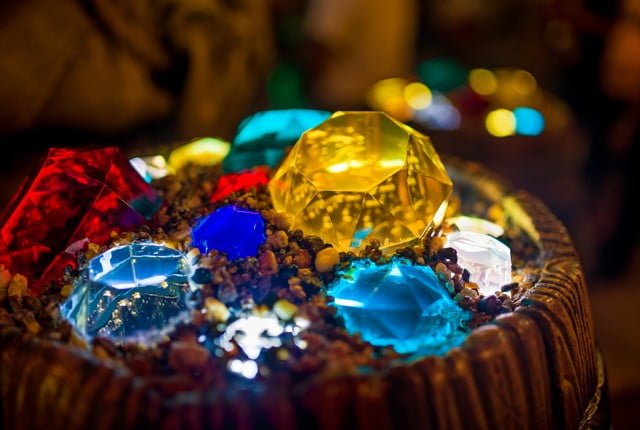 The second complaint I’ve heard some that doesn’t even register for me is that Seven Dwarfs Mine Train is not a new attraction because it replaced Snow White’s Scary Adventures. I just scratch my head at this one, and wonder if some Disney fans approach the parks with attempts at objectivity, or are that skewed by nostalgia-colored glasses. The fact that Seven Dwarfs Mine Train is a technologically advanced and beautifully-themed rollercoaster and dark ride hybrid attraction and Snow White’s Scary Adventure’s was a rickety, carnival-style dark ride through a warehouse doesn’t seem to matter. This is like the inverse of arguing that we didn’t lose 20,000 Leagues Under the Sea because we got some Winnie the Pooh play area “attraction.” I can’t imagine anyone saying that. Both positions are equally ludicrous. In my view, Snow White’s Scary Adventures was so laughably dated that its existence in a Disney theme park no longer felt appropriate. It was great in its day, but unlike other time-honored classics (e.g., Haunted Mansion), it aged terribly. Truth be told, and I’m sure this will upset some Disney fans, but I feel this way about several Fantasyland dark rides in the Magic Kingdom and Disneyland. (Here’s hoping the rumors of Disneyland’s project to update these for its 60th Anniversary are true.) Age alone does not make an attraction a “classic,” and while I don’t think Snow White’s Scary Adventures was ever a classic, I think Seven Dwarfs Mine Train will become one.

More significantly, and the reason I think Seven Dwarfs Mine Train will go down as a Walt Disney World classic, this is the rite-of-passage coaster that that Magic Kingdom really needed. I still vividly remember waiting for my parents while they did rider switch at Space Mountain, and dreaming of how awesome riding through space must be…and the joy I had when I was finally tall enough to do Big Thunder Mountain Railroad. Suffice to say, that first rollercoaster ride is a big deal to kids, and up until now, for many kids that first ride has been on Barnstormer. I have heard from a lot of people who like Barnstormer, and I can only assume it’s due to sentimentality for it having been their child’s first coaster.

Overall, Seven Dwarfs Mine Train is not a perfect attraction, but it’s a very good one. On the plus side, the detail, show scenes, storytelling, pacing, and scenic beauty of the attraction are all top notch. On the downside, it’s over too quickly and despite taking up a ton of real estate, it doesn’t add to the Fantasyland landscape at night nor does it have a consistent level of detail throughout. For me, the positives outweigh the negatives to such a degree that I’m still willing to consider this attraction one of the highlights of the Magic Kingdom. It’s an attraction that will be popular for years to come, and one that kids (and their parents) will anxiously await being tall enough to ride.

Have you experienced Seven Dwarfs Mine Train? Have you watched the ride-through videos of it? What did you think of it? Any other thoughts to add? Please share your thoughts and your own review of it in the comments!