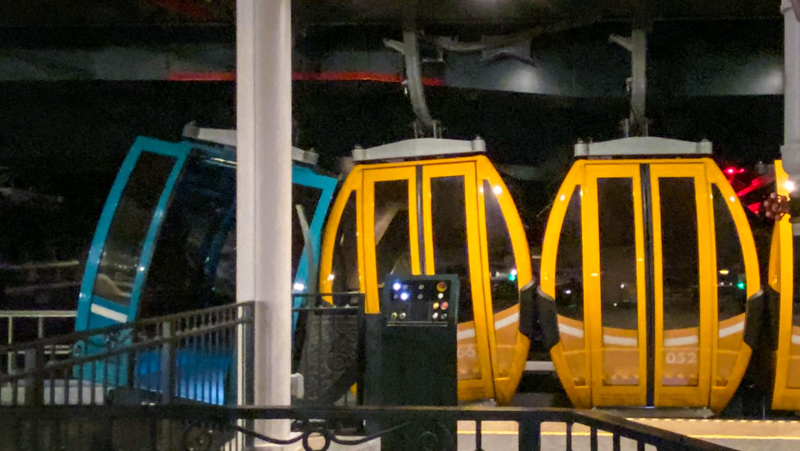 Last night at Walt Disney World, there was an accidental collision at one of the Disney Skyliner stations, causing the Epcot line to close. Thereafter, Reedy Creek Fire Department evacuated guests on that line via lifts over the course of a few hours. In this post, we’ll look at what happened and our commentary about the future impact of this incident on the Disney Skyliner’s operations.

Sometime between 8 and 9 pm, at the Riviera/Caribbean Beach Skyliner station, the aqua-colored gondola cabin did not attach to the cable to dispatch from the station en route to Epcot (see top image via @Ada58974405 on Twitter). The gondola cabins behind it slowly crashed against it. The crushing of the vehicles caused the glass to shatter on the impacted vehicle and several of the yellow cabins behind it to be damaged.

Consequently, the Epcot line went down for several hours, necessitating an evacuation by Reedy Creek Fire Department. This process was done via lift on a cabin by cabin basis, and reportedly took until after 11 pm to complete. Some guests report being stuck for as long as 3 hours, and the entire Skyliner system remains closed today…

Thankfully, Walt Disney World is reporting that no guests were injured in the accident. (It’s also fortunate that this happened at night, as the lack of air-conditioning definitely would have been an issue had this occurred during the middle of the day yesterday.)

Walt Disney World has informed Orlando-area media outlets that there has not been an accident, but rather “unexpected down time” of the Skyliner. That is quite the disappointing spin, especially with widely-circulated photos on social media reflecting what actually happened.

As compensation, stranded guests are reporting that Walt Disney World Guest Relations provided each of them with a $100 gift card, 2 park tickets, and taxi vouchers. Some guests who were stuck stated in the “Disney World Junkies” Facebook group that they applaud how Disney handled the situation.

Many of the guests who saw the crash first-hand or were stranded on the Epcot line of the Skyliner posted photos to social media. Here’s a look at some of those:

Not a fun experience on the new skyliner. @WaltDisneyWorld @WESH pic.twitter.com/fwuXjlN9wg

What happened with this new ride? Feeling sorry for the people still trapped. @WaltDisneyWorld @WESH pic.twitter.com/mAjcH7hD5o

More trucks now being dispersed for evacuation. This one has parked directly under us for Disney Skyliner. #disneyskyliner #disneyworld @WDWToday pic.twitter.com/ml64YWAoC7

Well here’s a look inside the emergency kit on the #Skyliner. We were just told we could open it. There’s water inside, a note pad, cups (possibly in case nature calls), light stick … hitting 90+ min @WaltDisneyWorld @WFTV pic.twitter.com/3xyvrHGyUO

Evacuating two people at a time off of the Disney World Skyliner… could be very slow with 10 capacity gondolas…. #disneyskyliner #disneyworld @WDWToday pic.twitter.com/y5S1IJxhtP

Additionally, our friends over at BlogMickey.com headed to the scene and captured some good photos of the evacuation as it was in progress. Coincidentally, we were driving on Buena Vista Drive shortly after the accident but before road closures started and the evacuation began. Oblivious to it all, we didn’t see anything even though we were right there!

We did, however, head out to Disney’s Hollywood Studios early this morning to confirm that the Skyliner would remain closed today (our photos in this post are all from this morning). 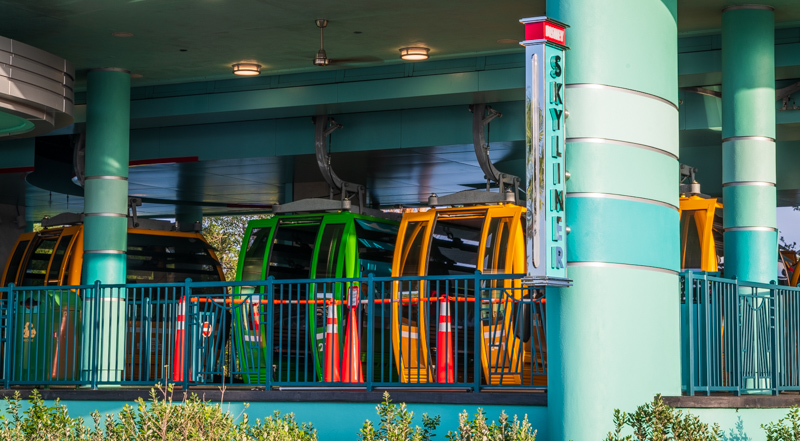 Although there was no signage outside indicating as much, Cast Members posted outside the Skyliner station indicated that it would remain closed today. We could see from a distance that the Epcot line was likewise not moving. No one with whom we spoke has insight into when it’ll reopen, and as such, this closure should be treated as indefinite.

It seems likely that safety inspections or more will need to occur before the Skyliner can resume operations. We hesitate to speculate as to when it’ll return, or what training, technical, or other safety adjustments might need to be made before Walt Disney World is comfortable running the Skyliner again. 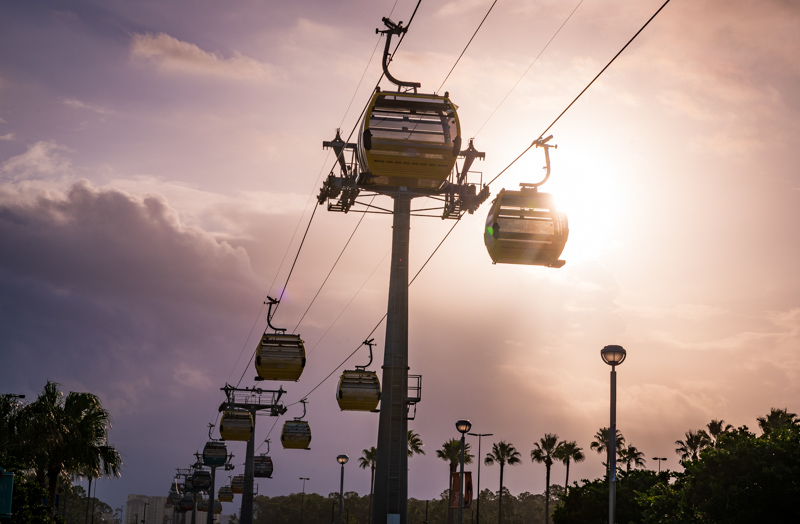 For us, this news is incredibly disappointing. It’s no secret that we’re huge fans of the Skyliner and have been strong advocates of this system since even before it was officially announced two years ago. This has been among our most anticipated additions in a long time at Walt Disney World.

It’s also no secret that the Skyliner has been dogged by delays and closures throughout the first week of operations, but we chalked these up to early growing pains. Given the uptime and reliability of the thousands of similar Doppelmayr gondola systems around the world, it seemed likely that these would be resolved in the near future and the Skyliner would become a reliable–and beloved–form of transportation at Walt Disney World.

In fact, our experiences with the Skyliner have been resoundingly positive. Since publishing our Skyliner Gondola Review: Disney World’s Most Magical Flight on Earth article, our rides have been even better. We’ve used the gondolas for Extra, Extra Magic Hours at Disney’s Hollywood Studios and Epcot’s rope drop a couple of mornings and had zero delays, zero wait in line, and zero other guests in our cabins. It has been (had been?) smooth and flawless. 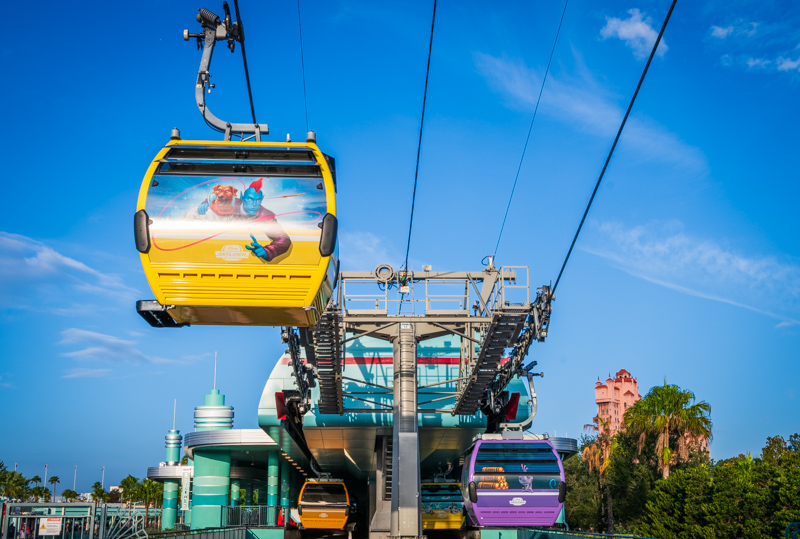 Despite our unblemished firsthand experiences, there is no denying that others have not had similarly glowing results. Last week, the Art of Animation and Pop Century station had a delayed opening by 2-3 hours on at least one morning. The Epcot line has had a lot of sporadic downtime leading to backups at the International Gateway station, and one evening we saw it down completely for the rest of the night while walking over to Crescent Lake.

Those are just the issues we’ve been on hand to observe or hear about–it’s possible there have been more. Given the reliability of these gondola systems elsewhere and the fact that Walt Disney World has been testing the Skyliner for months, we’re left scratching our heads. What happened? Why have there been so many operational challenges? 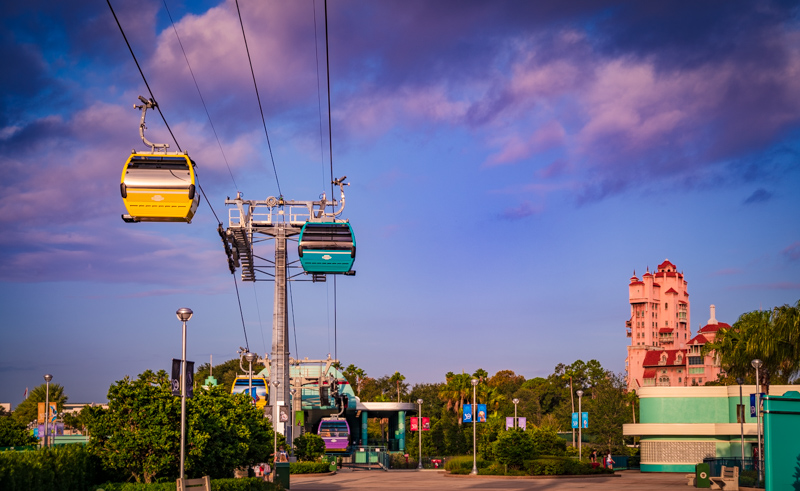 Still, all of what happened prior to last night would be fairly easy to shrug off as early hiccups (so long as you aren’t a first-time visitor who was delayed for a prolonged period by one of the outages). Short stoppages, delayed openings, or early closures would be long forgotten after a few months of reliable operations with minimal downtime. None of those are stories that would stick with visitors and cause them not to use the Skyliner in the future.

Judging by social media, this incident is quite clearly different. Some guests already had understandable fears of being so high up in an aerial transportation system, and reports of being stuck for 2-3 hours in a small cabin is only going to give more guests pause about riding. For many Walt Disney World fans, images of the collided gondolas and the evacuation process will cast a long-term pall over the Skyliner. 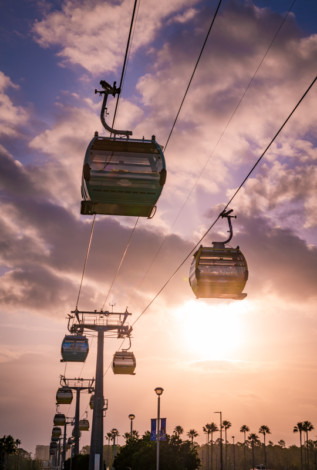 We’re still incredibly enthusiastic about the Skyliner, but have to admit that this one really stings. However, we have to report the realities of the new gondola transportation system, rather than what we want it to be.

As much as we’d like to convince ourselves otherwise, this is a serious issue for the long-term perception of the Skyliner. This will be a PR nightmare for Walt Disney World–especially as the story is already making international news. 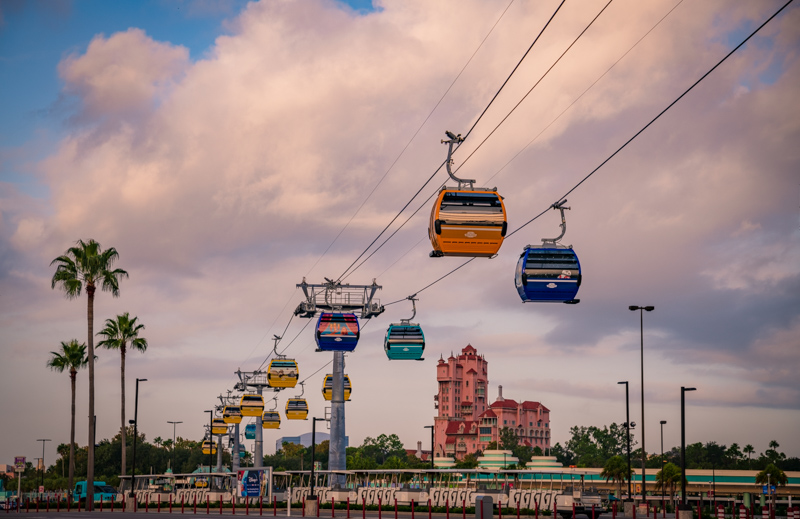 We will continue to use the Skyliner as normal with zero hesitation just as we would automobiles, airplanes, bicycles, monorails, peoplemovers, our feet, or any other mode of transportation with an imperfect record. More concerning than safety is reliability and up-time.

If you’re traveling to Walt Disney World in the next couple of months, you should keep apprised of Skyliner operations to determine whether it’s sufficiently reliable for you to use during your trip. For Walt Disney World vacation planning purposes, we’ll keep you posted on that and everything else to do with the Skyliner.

Did you witness the Skyliner accident? Does this crash have you more hesitant to use Walt Disney World’s newest form of transportation in the future, or will you stick to buses? Anything else to add? Any questions we can help you answer? Hearing your feedback—even when you disagree with us—is both interesting to us and helpful to other readers, so please share your thoughts below in the comments!