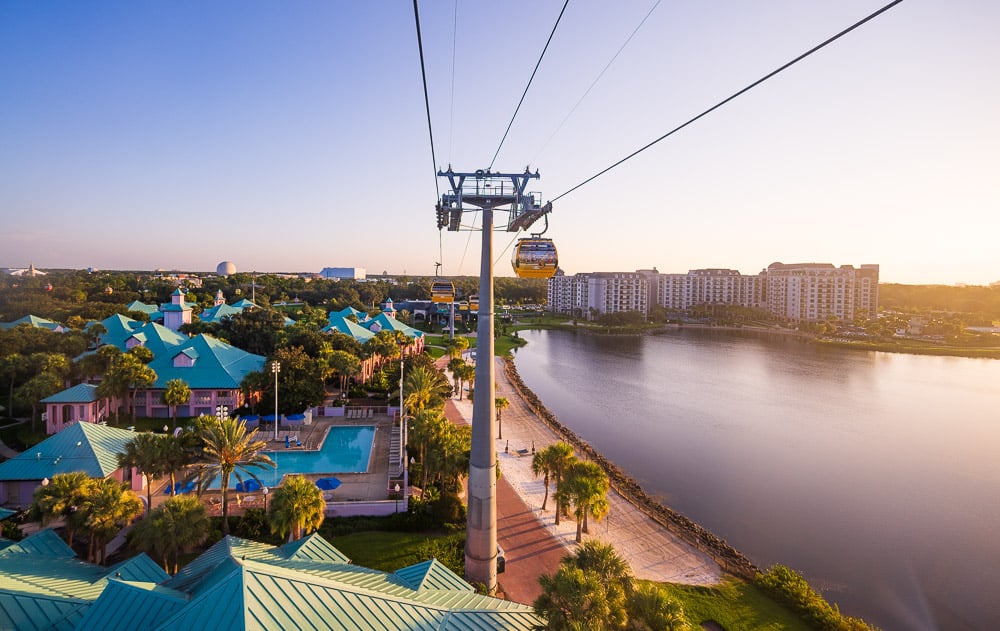 Taking advantage of Early Entry at Walt Disney World requires getting up (wait for it) early and being to the parks prior to park opening. This post covers whether it’s possible to accomplish that at EPCOT or DHS by relying on the Skyliner gondolas, rather than paying extra for Uber, Lyft, or a Minnie Van.

With a recent multi-night stay at Art of Animation Resort, I thought I’d rise and shine for Star Wars: Rise of the Resistance, Slinky Dog Dash, and Remy’s Ratatouille Adventure putting the Skyliner through its paces. My goal was to see whether it’d be possible to use the aerial transportation to arrive at these two parks before wait times shot up for this trio of attractions.

To understand why this is important, it’s worth reading Disney’s Hollywood Studios Early Entry Report: Triple-Digit Trio Triumph and Early Entry at Epcot: Better Than Genie+. Those are a couple of months old, but nothing about my experiences this go-round were materially different. (I’ll probably still do an EPCOT write-up as there were tweaks, but the DHS one would be a remake–and not a good one like Pete’s Dragon. More like Aladdin or Beauty and the Beast.)

Next, some important caveats. First, what follows are my purely anecdotal experiences with using the Skyliner from the Pop Century and Art of Animation station. The same would’ve applied from Caribbean Beach or Riviera Resorts since those are closer to both parks on the Skyliner.

Second, these days at EPCOT and Disney’s Hollywood Studios were 6/10 to 8/10 on the crowd calendar (depending on the park and day). Average wait times throughout the day for headliners like Star Wars: Rise of the Resistance, Slinky Dog Dash, Millennium Falcon: Smugglers Run, Remy’s Ratatouille Adventure, Frozen Ever After, Test Track, and other attractions were all above an hour–several were above 90 minutes. 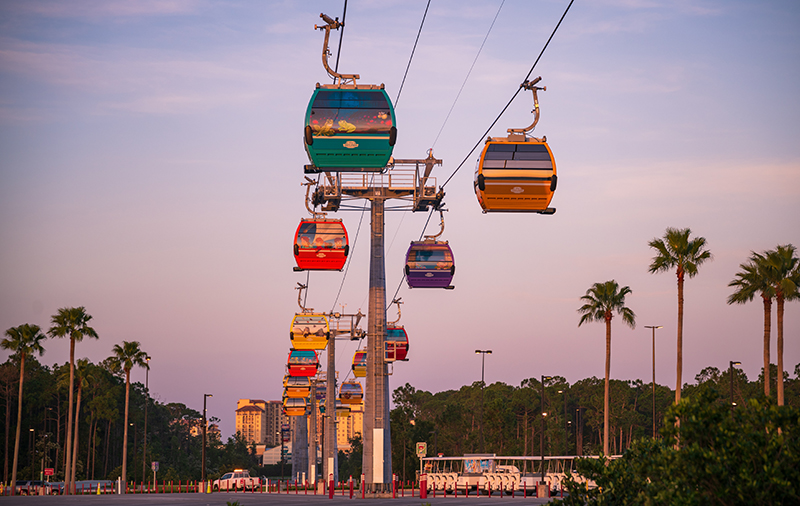 Also notable about these tests occurred on days when both EPCOT and Disney’s Hollywood Studios opened at 8:30 am. This has been the norm since spring break season, and both have extended their 8:30 am opening streaks through at least August 27, 2022. Park hours beyond that are boilerplate, but we expect this will continue into at least early September 2022.

It wouldn’t make much sense to extend hours through the late August off-season, but not follow suit for Labor Day weekend. Whether the trend continues after that throughout September–typically the slowest month of the year at Walt Disney World–remains to be seen. Even if September gets later openings, it’s likely that Walt Disney World will revert to 8:30 am opening times for October through December 2022, as those months are likely to be among the busiest of the year. 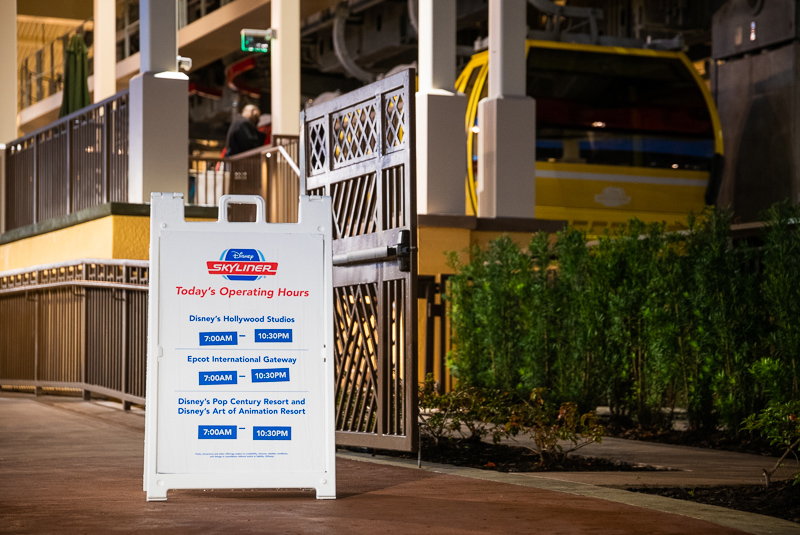 Currently, every route of the Skyliner operates from 7 am until 10:30 pm. Aside from a short stretch of time during the “heyday” of the virtual queue for Star Wars: Rise of the Resistance in late 2019 and early 2020, these are the longest hours we’ve seen for the Skyliner.

It’s possible the opening time will move to 7:30 am once the fall off-season arrives, but hopefully not. These operating hours have been fairly consistent for this spring and summer, to our knowledge. 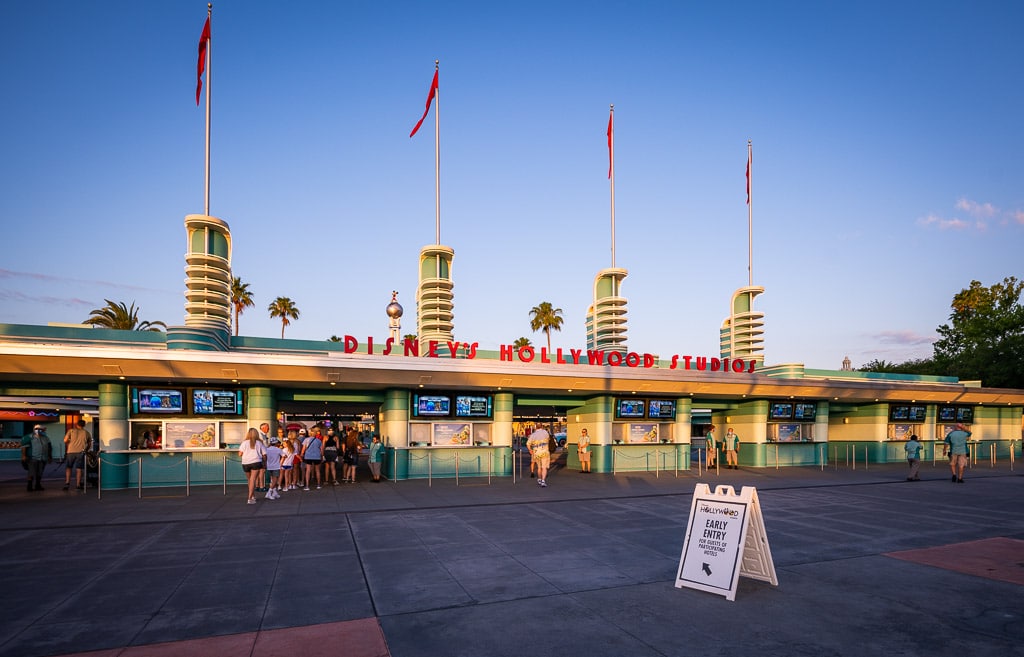 This is highlighted because it could change the calculus on using the Skyliner for Early Entry. As we’ve seen in the past, morning crowds are worse with later start times and better with earlier ones. This is because people like to sleep-in on vacation, or so I’m told. This shrinks the pool of participants for Early Entry as the start time moves earlier.

Similarly, starting the Skyliner at 7:30 am puts more stress on the system, as those wanting to take advantage of Early Entry really want to be at Disney’s Hollywood Studios or EPCOT by around that time. 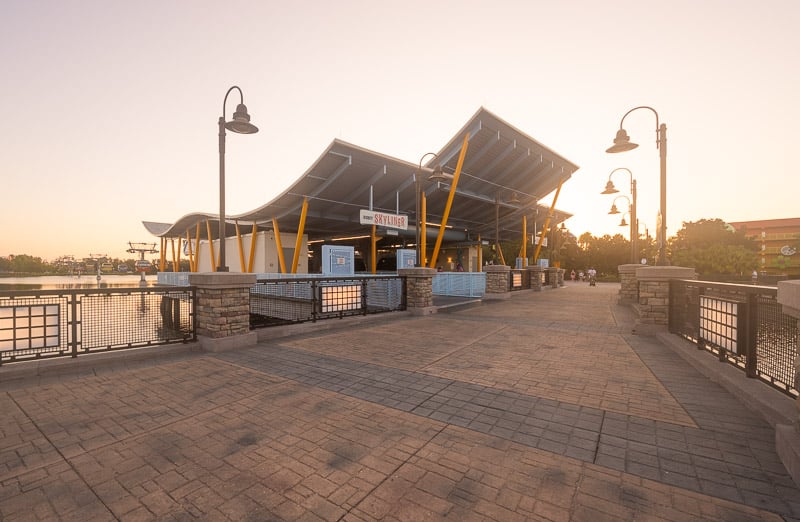 Anyway, I left our Cars room at Art of Animation Resort at about 6:50 am on both mornings. At this point, the Skyliner was already gliding around overhead, and there was a slow trickle of guests heading towards it from both Hourglass Lake Value Resorts.

Wanting a fast internet connection to score spots in the virtual queue for Guardians of the Galaxy: Cosmic Rewind, I opted to do that from the hotel before boarding the gondola. 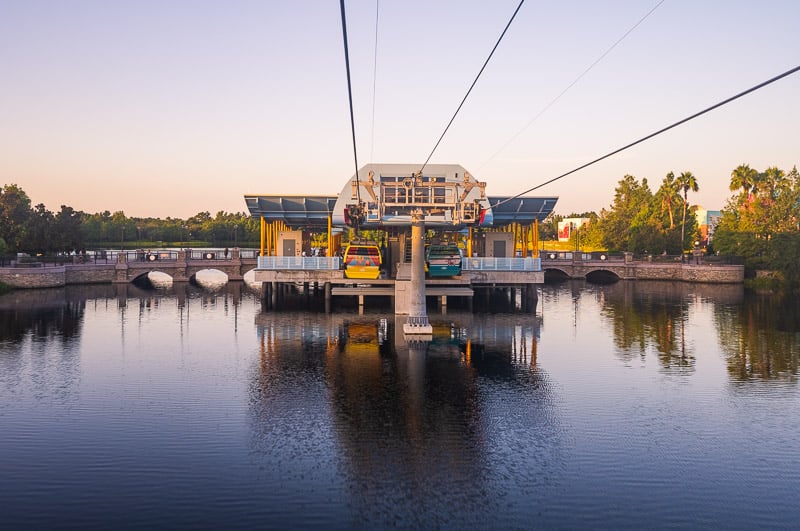 That didn’t much matter. There was no line for the Skyliner whatsoever, with some cabins going unfilled entirely.

This could differ on other mornings depending upon crowd levels, so don’t expect zero wait or a cabin to yourself. The rides were quick–nice cool morning breezes that might fool you into thinking they’d be pleasant days in Florida. (They were not.) 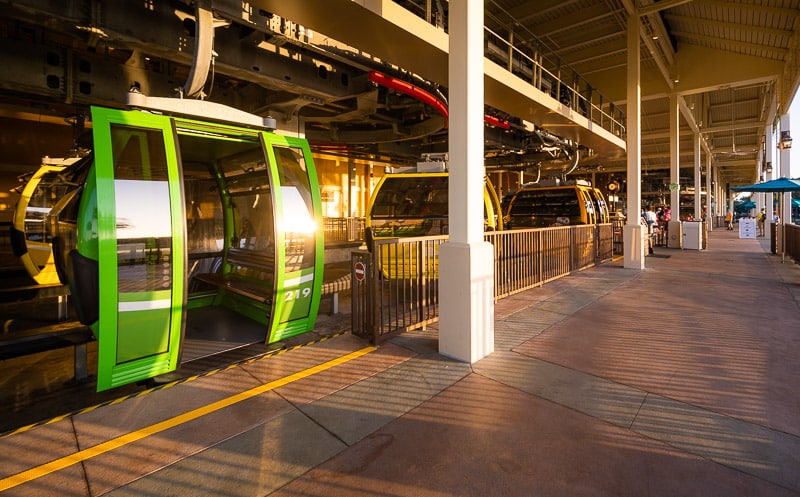 The true test would be at the hub station at Disney’s Caribbean Beach Resort, where guests for several thousands more rooms could converge and make for a more chaotic situation.

Between this being peak summer vacation season and remembering how bad the lines have been in the past, I was bracing myself for the worst upon exiting at CBR. Thankfully, that was not even remotely the case. 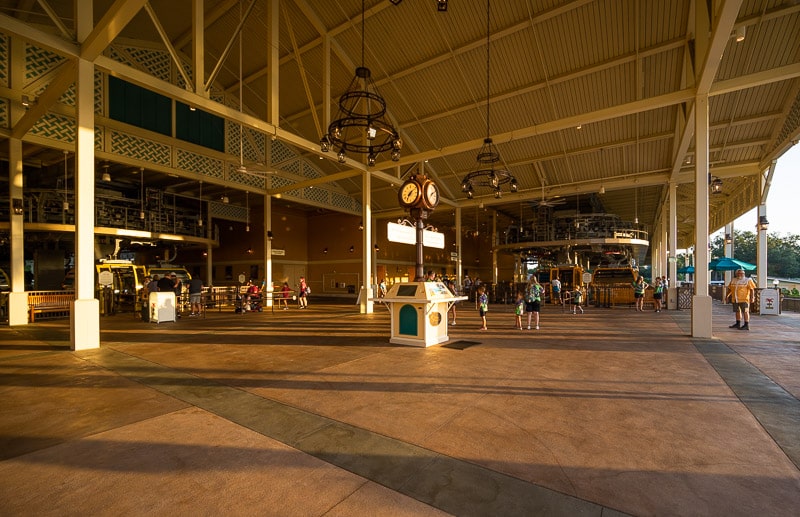 I arrived here at or before 7:10 am both mornings, and there were never crowds or lines. Had I stood around and counted guests, I probably would’ve found a handful more heading to Hollywood Studios, but even that was hardly a line.

There were overflow queues in place, and none of that was in use. 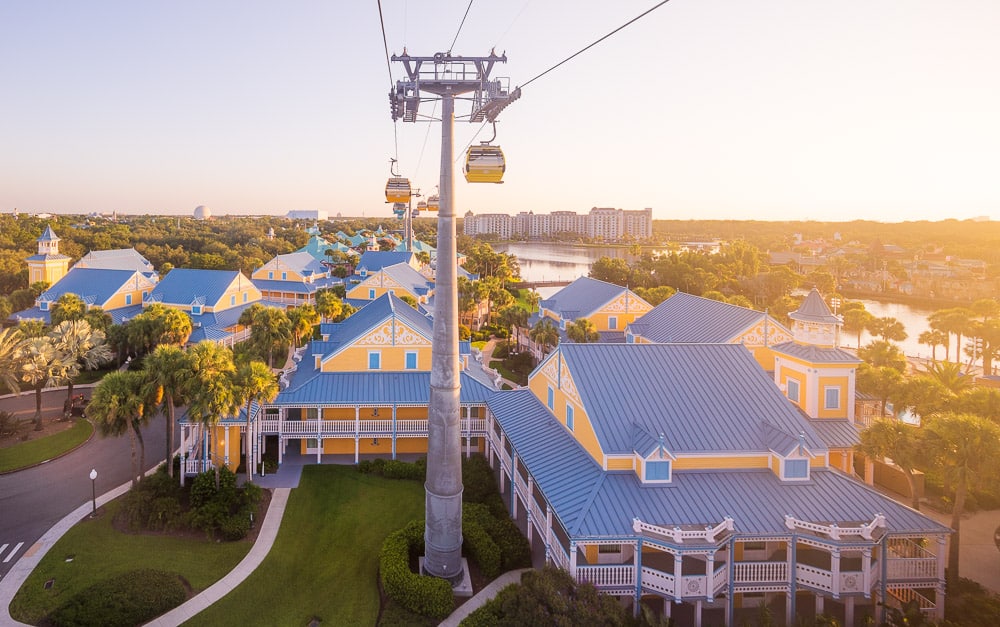 In my experience with Skyliner and other resorts, these lines actually fill up around actual park opening.

Even though all on-site guests have access to Early Entry, it’s starting time is an insurmountable obstacle for many families. Getting up and out the door before 7:30 or even 8 am is a non-starter. Others may not know about Early Entry, or that they’re eligible. 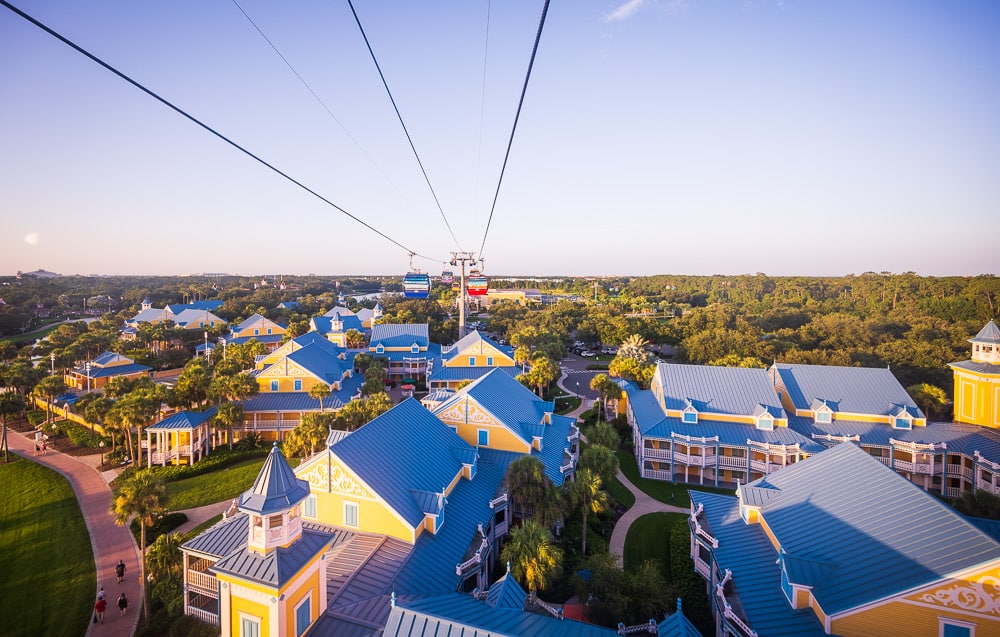 For my flights to EPCOT and Disney’s Hollywood Studios, I once again had cabins all to myself.

I was even able to “slow walk” one of the lines so I’d be placed in a wrap-less gondola en route to EPCOT. That was not possible heading to DHS, but that’s also a far less photogenic flight. 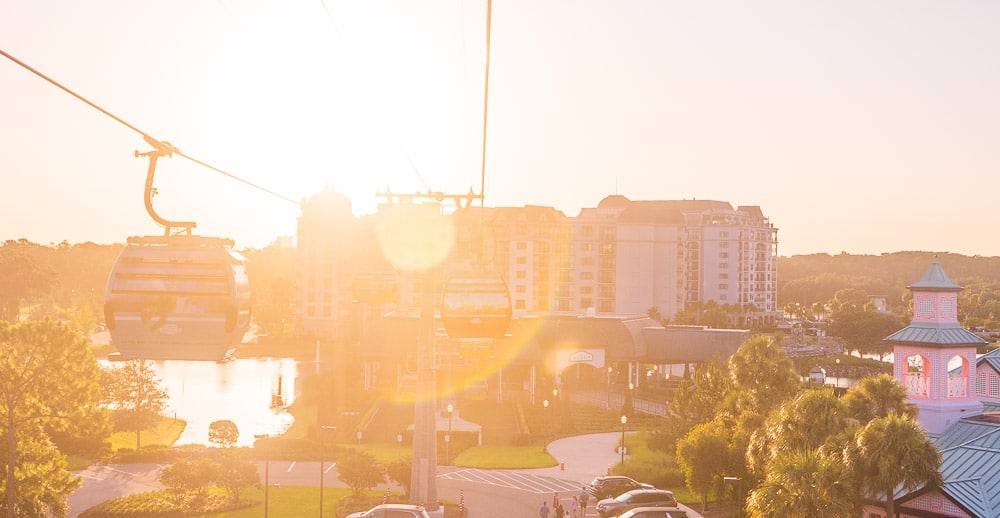 No one joined my cabin at the Disney’s Riviera Resort station.

I didn’t even see anyone there aside from Cast Members. It always seems to be the least busy Skyliner station. 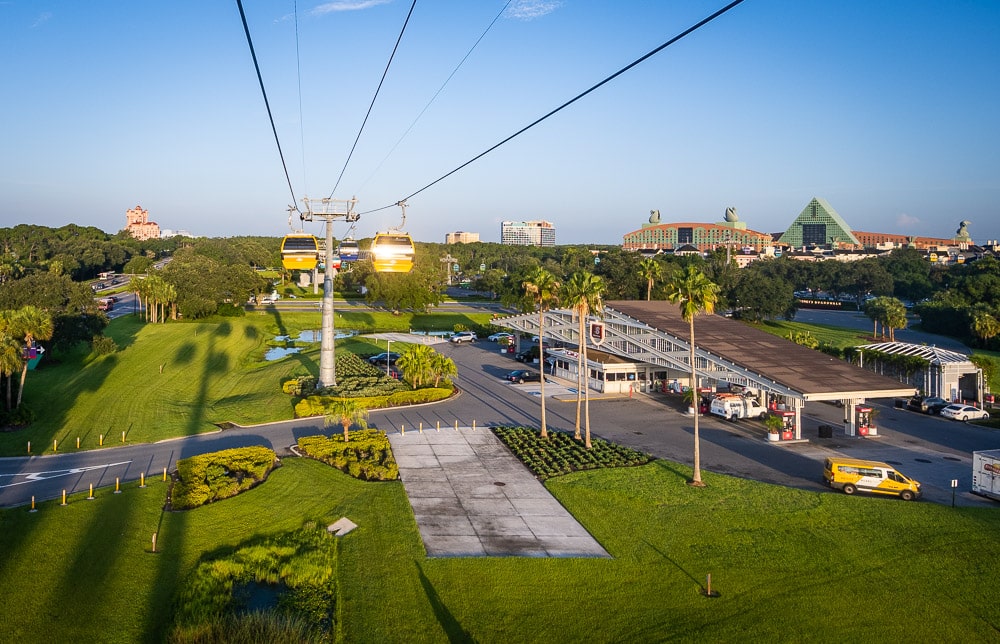 The Speedway gas station was actually busier than the Riviera Resort gondola station. It also has gas below $4 per gallon–$3.90 last I saw, for those keeping score at home.

Not really relevant to the topic of this post, but it’s all been smooth sailing so far, so not much else to say. 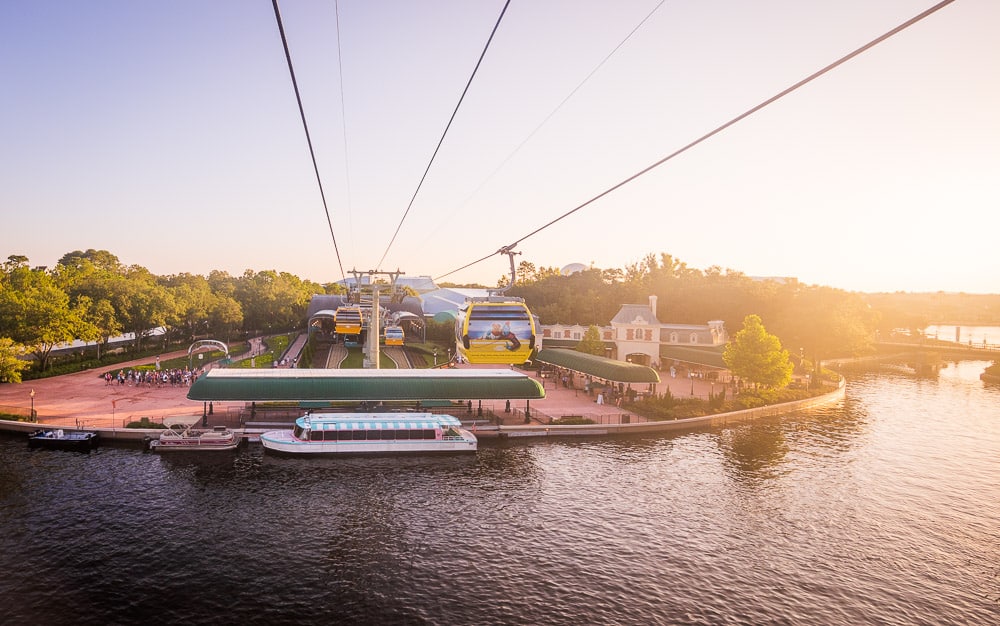 My Skyliner landed at EPCOT’s International Gateway at approximately 7:20 am. Still 40 minutes to go before Early Entry officially begins.

In the photo above, you can see a small crowd gathered outside the Skyliner exit/entrance waiting to enter the park. 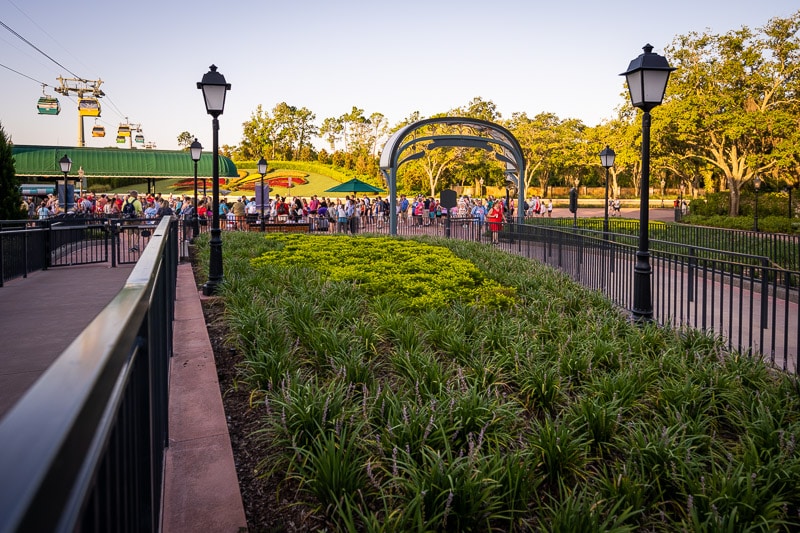 Here’s a look at that same line from the exit of the Skyline station.

This line does not go all the way to bag check. These guests are being held pretty much right in line with the left side of the photo. I’d say that there were fewer than 100 guests in front of me in line. The number was slightly higher at Disney’s Hollywood Studios, but that also has more headliners to disperse guests (and all of them are a bit of a hike, meaning you can make up some lost time en route to the rides). In both parks, my first ride of the day was a literal walk-on. 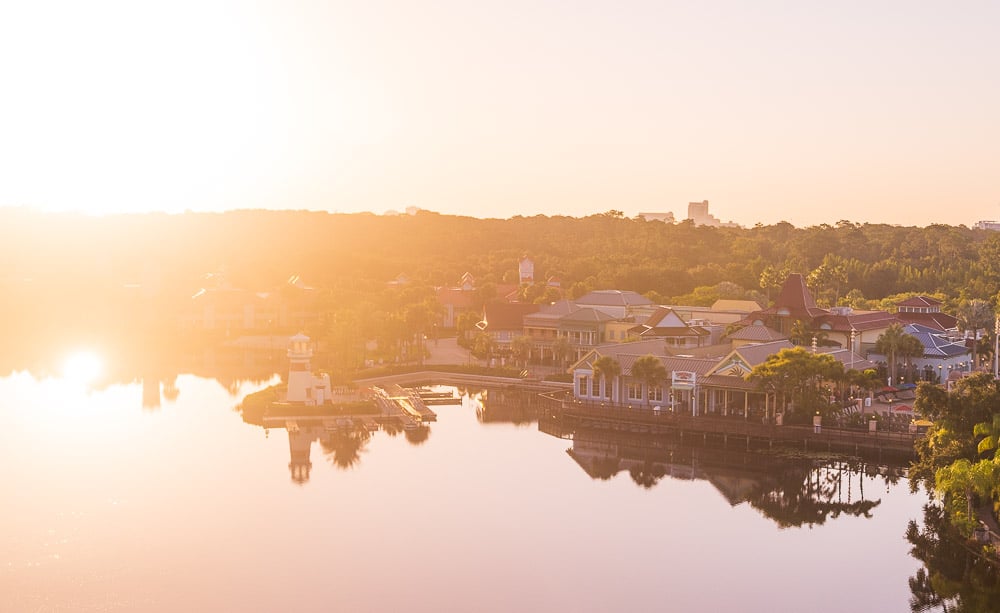 Keep in mind that I did not queue up for the Skyliner before it started running nor did I get in line at 7:00 am on the dot. I boarded at Art of Animation at around 7:02 am and took my time taking photos at the Caribbean Beach station.

Nevertheless, I was among the first wave of guests at both parks. This put me in a perfect position to do Remy’s Ratatouille Adventure plus Frozen Ever After and Star Wars: Rise of the Resistance plus Slinky Dog Dash (on separate mornings, obviously). 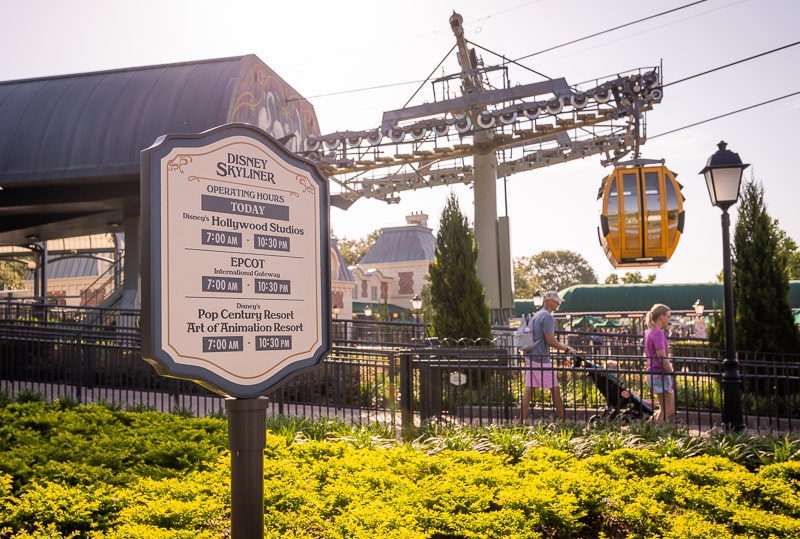 Ultimately, using the Skyliner for Early Entry at EPCOT or Disney’s Hollywood Studios should be smooth sailing for beating the crowds to Star Wars: Rise of the Resistance plus Slinky Dog Dash or Remy’s Ratatouille Adventure and Frozen Ever After. I was able to accomplish both headliners at each park, plus other attractions, with minimal waits during Early Entry. Taking the Skyliner put me at zero disadvantage whatsoever.

With that said, the asterisk is that this requires park hours, operating hours for the gondola, and attendance be comparable to these experiences during the summer season. Changes with crowd levels alone shouldn’t move the needle much–I’d expect this to work similarly this Thanksgiving or Christmas assuming no cuts to hours. (That last part is really key–it’s the hours that are crucial to the success of this approach.)

From my perspective, walking from the Crescent Lake Resorts is still the optimal strategy since you’re in control of your own fate. However, that’s not easily accomplishable unless you’re staying at those hotels. The main takeaway here should be that it’s not necessary to jump through hoops or spending extra by taking an Uber, Lyft, or Minnie Vans from the Skyliner resorts. The gondola is perfectly pleasant and there’s enough margin for error that even if things don’t go flawlessly, the Skyliner is still the best way to approach Early Entry from the Barefoot Bay or Hourglass Lake resorts.

Have you used the Skyliner for Early Entry at EPCOT or Disney’s Hollywood Studios? Were you able to beat the crowds to Star Wars: Rise of the Resistance, Slinky Dog Dash, Frozen Ever After, or Remy’s Ratatouille Adventure? What time did the Skyliner start operating when you did this? Would you recommend the Skyliner, or using Uber/Lyft? Do you agree or disagree with our assessment? Any questions? Hearing your feedback–even when you disagree with us–is both interesting to us and helpful to other readers, so please share your thoughts below in the comments!