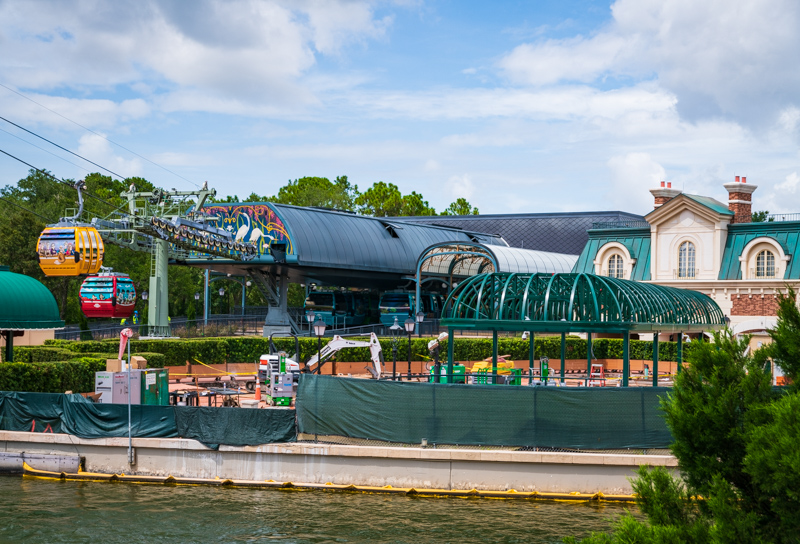 We’re back at Walt Disney World’s Skyliner gondola resorts for our (final?) update as this new aerial transportation system begins previews today and glides towards its official grand opening date at the end of September 2019. In this photo report, we’ll take a look at the stations at Hollywood Studios, Epcot’s International Gateway, Caribbean Beach & Riviera Resorts.

As you might’ve seen at the beginning of our One 20-Hour Day at Walt Disney World trip report from the opening day of Star Wars: Galaxy’s Edge and Epcot’s Food & Wine Festival, we bet and lost on a soft opening of the Skyliner. Thinking surely that the Skyliner had to open in time for Star Wars Land, we booked a stay at Pop Century–and stubbornly stuck with it, thinking there was a good chance of a soft opening that day.

Obviously, that did not happen. I don’t think we were alone in being disappointed about this, but at least crowds not being sufficiently high for the Skyliner to be “necessary” has meant low crowds in the parks. The other good news is that previews begin today, and we’ll soon have reports from the very first riders of the Disney Skyliner gondolas. There’s still a bit more bad news, though…

After that, there are previews for all Cast Members from September 23-26, 2019. Unlike the previews for Epcot and Disney’s Hollywood Studios CMs, these require registration and allow the Cast Member to bring a guest. (So, similar to the Star Wars: Galaxy’s Edge previews.)

This means we’ll have to wait a little longer to ride the Skyliner, as there won’t be general public soft openings prior to (at least) September 27, but we weren’t really expecting an extended soft opening here once the Skyliner missed the Star Wars: Galaxy’s Edge opening. Personally, I’m looking forward to hearing first-hand reports, as this will only further build anticipation.

Figuring there would be a flurry of last-minute testing over the weekend to ensure things are running smoothly for today’s previews, I headed out to Epcot, Disney’s Hollywood Studios, and Caribbean Beach yesterday to see what was up… 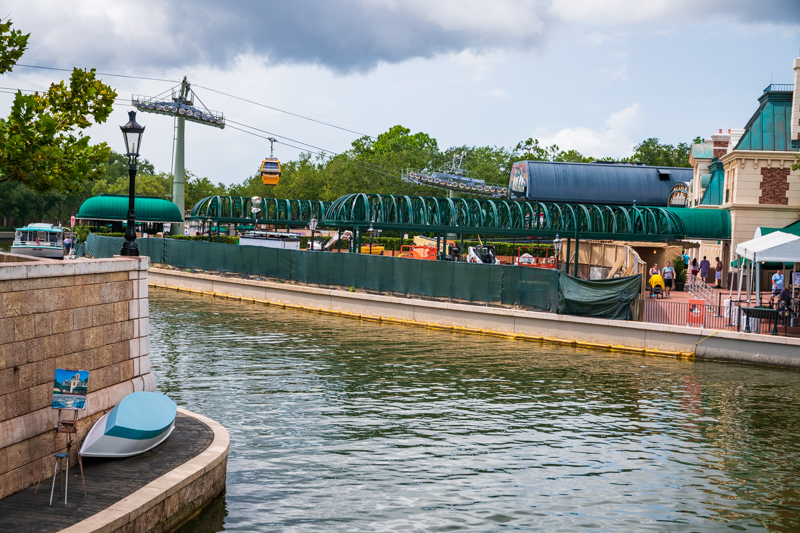 We started our day at Epcot’s International Gateway, so that’s where we’ll begin here.

Despite doing a few Epcot updates already this month, I’ve neglected to show the progress on the new park entrance here. It’s moving along at a surprisingly quick pace and could be ready by September 29. 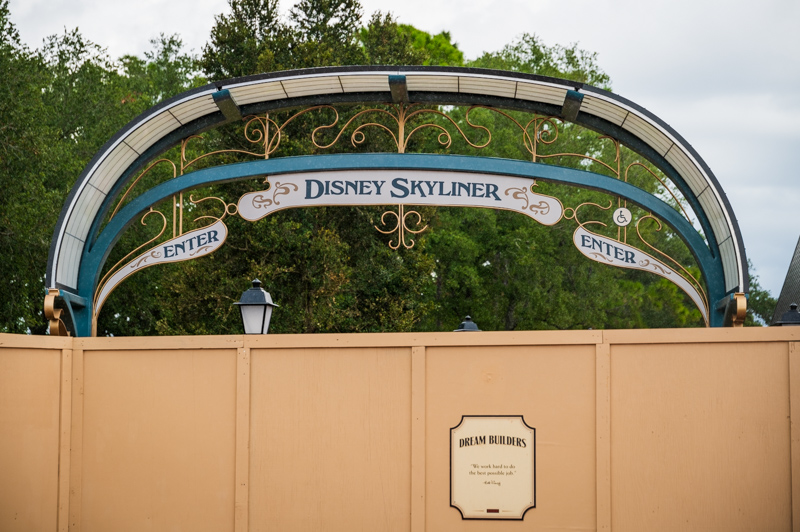 As for the Skyliner, I think the only progress here since our last update is this entrance awning and signage.

Otherwise, this Skyliner station is ready to go. 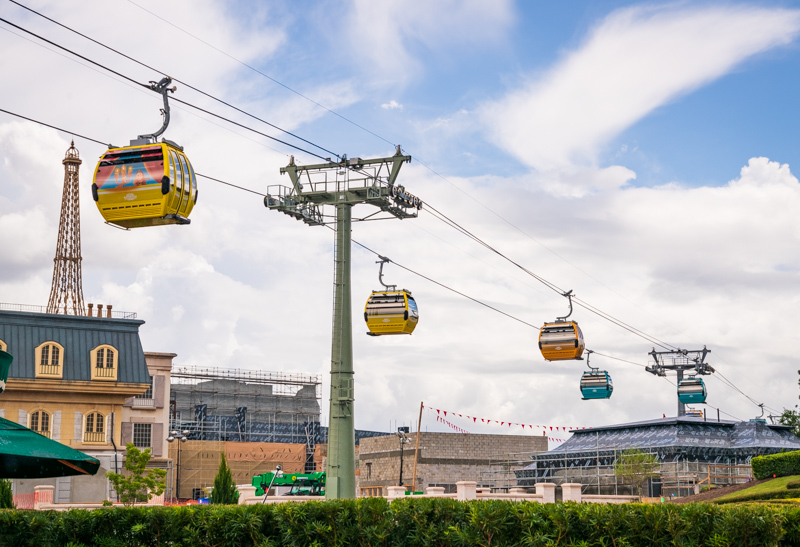 As we leave Epcot, here’s a bonus view of the gondolas gliding over Remy’s Ratatouille Adventure.

Speaking of which, we should soon have new aerial construction photos of the France expansion! 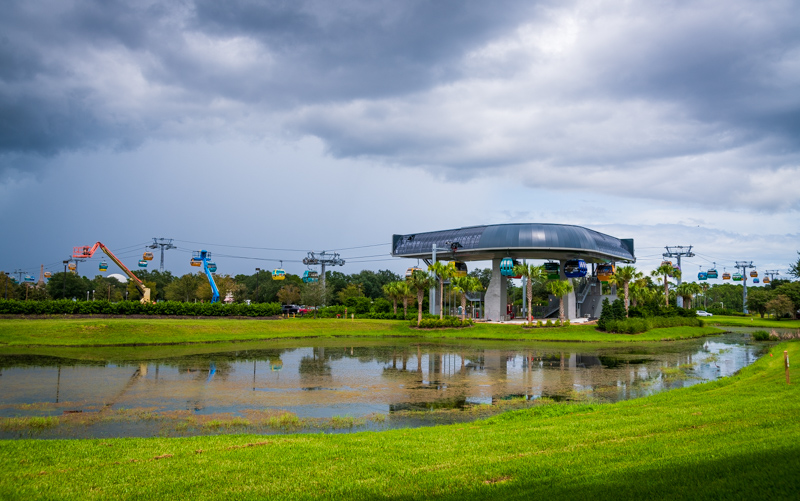 From Epcot we walk over to Disney’s Hollywood Studios…

A quick stop at the turn station to take a look at what’s happening here. 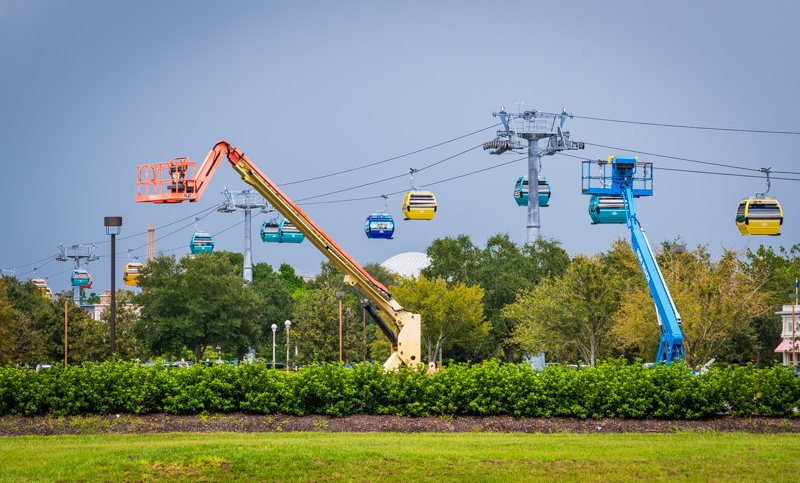 This has been done for several months, so no real progress to report.

I did notice Spaceship Earth and the Eiffel Tower for the first time over here. As trees have been cleared for the Skyliner and other projects, views like this are increasingly common. 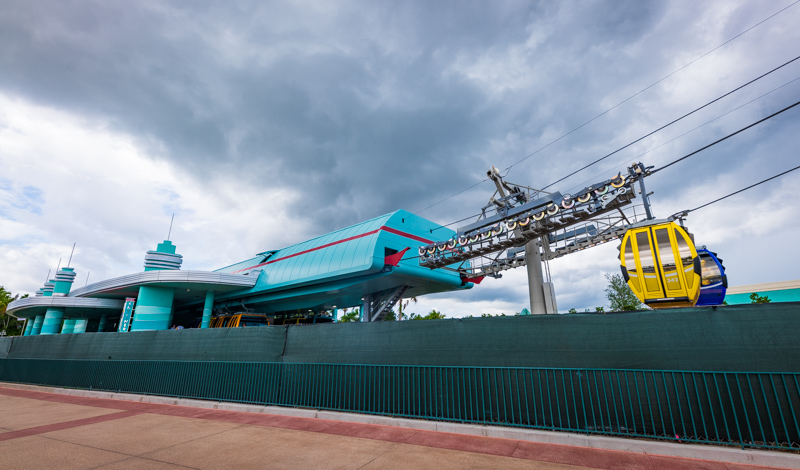 Not much to see at Disney’s Hollywood Studios.

Along with the Pop Century and Art of Animation Skyliner station, this is what’s been done the longest, and where testing/training has been taking place for months. 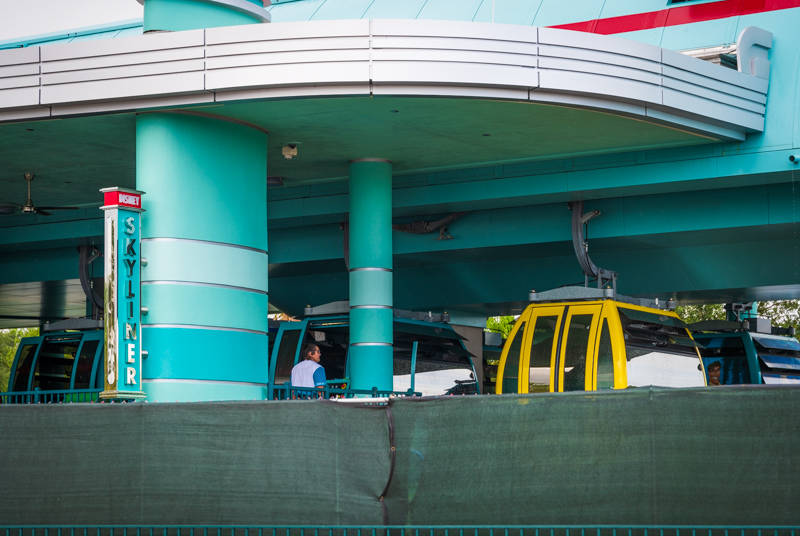 To my knowledge, all of these gondola cabins were being sent through empty. 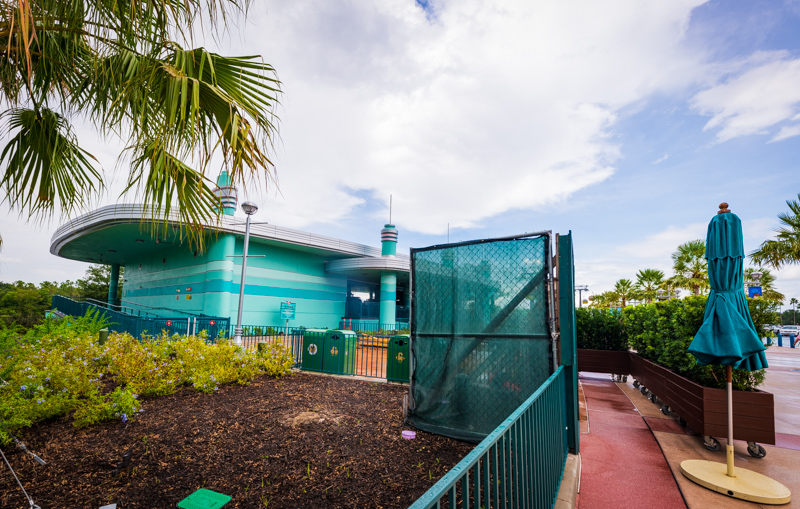 The entrance for this week’s Cast Member previews of the Skyliner is set up.

The signage at this station is also now fully revealed. In addition to the Skyliner marquee, there are also signs indicating that this travels to Caribbean Beach, with connecting service to Epcot, Riviera, and Pop Century/Art of Animation. 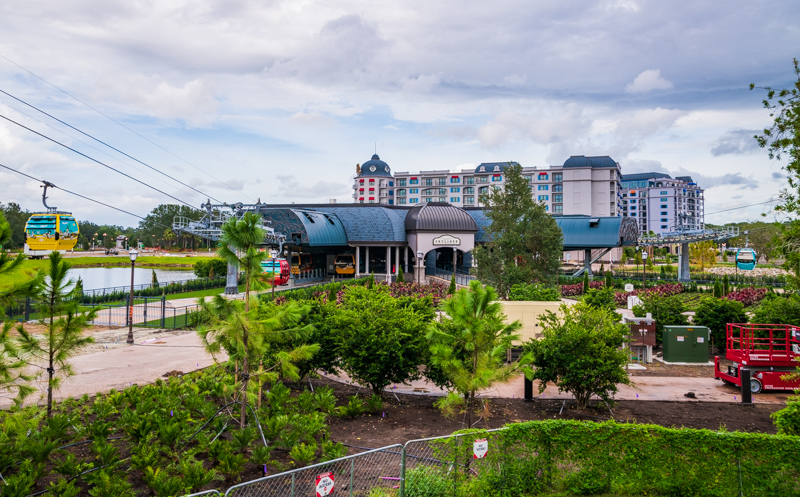 After dodging a 10 minute downpour, we catch the bus to Caribbean Beach.

There, we’ll begin with a look at the Riviera Resort station. 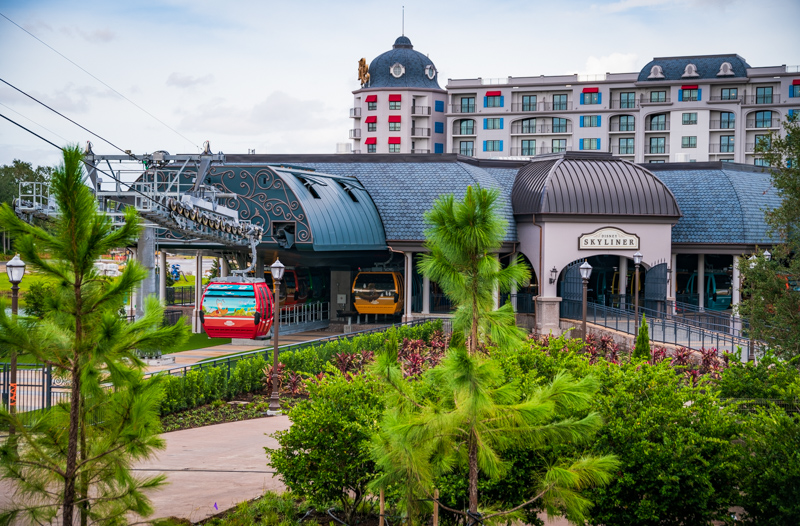 From what I can tell, this is almost entirely completed.

The walkway to Riviera Resort is now fully covered, and the gates, ramps, landscaping, etc. are finished. 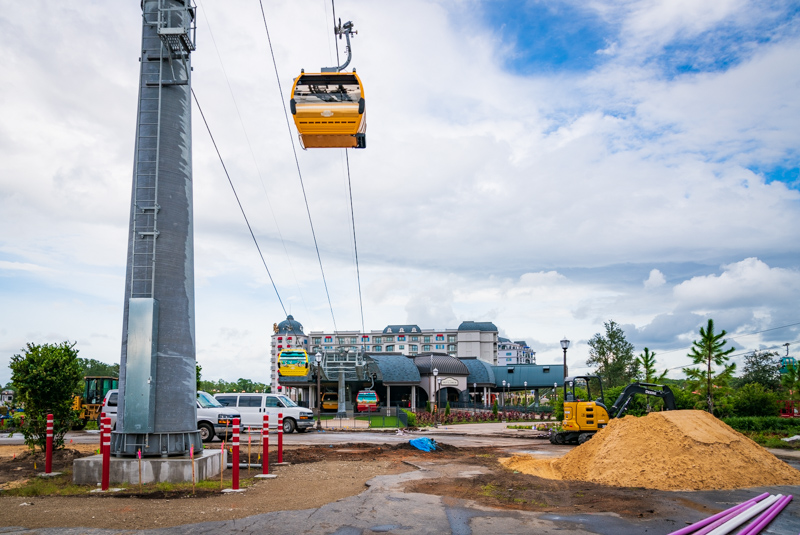 The only work left to be done is some clean-up in the Caribbean Beach parking lot. It also seems like that some more shrubs will be planted to conceal some electrical components and create a natural barrier.

It’s hard to see from the photo, but there’s a finished path that’ll connect the parking lot to the Skyliner station. 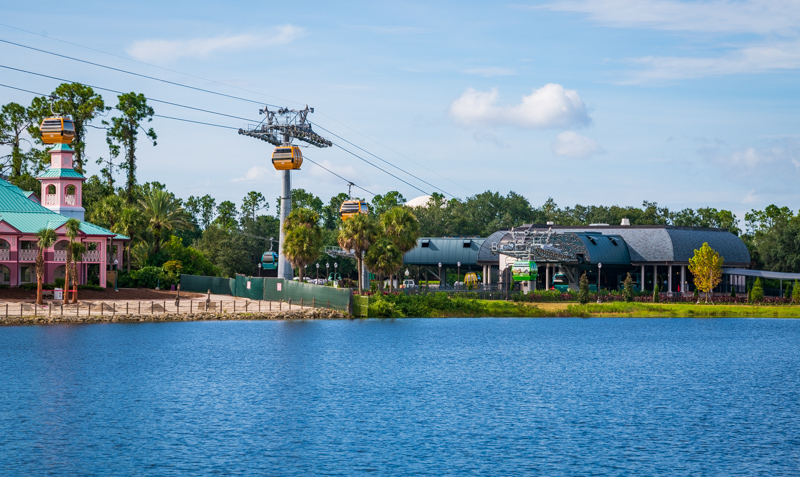 There will also be another path that’ll connect the main waterfront path along Barefoot Bay to the station. That’ll basically be where you see the current fence in the foreground of this photo.

To my knowledge, it’s still unknown whether the Epcot and Riviera Resort stations will open on September 29. The International Gateway project is now moving fast, but still seems unlikely to finish in another week. Having that station open without the new turnstiles and bag check is…not ideal. I guess we shall see! 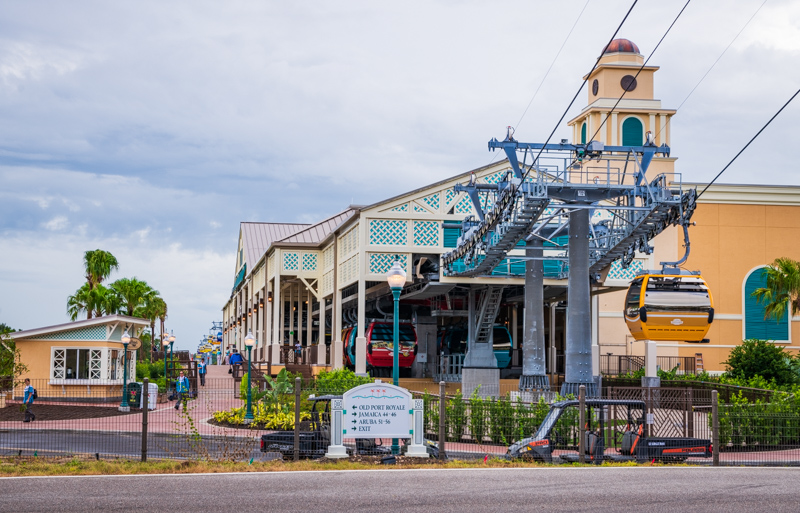 Walking over towards the Caribbean Beach Skyliner station, we catch the test in the middle of a shift change.

There were a lot of costumed Cast Members coming and going. 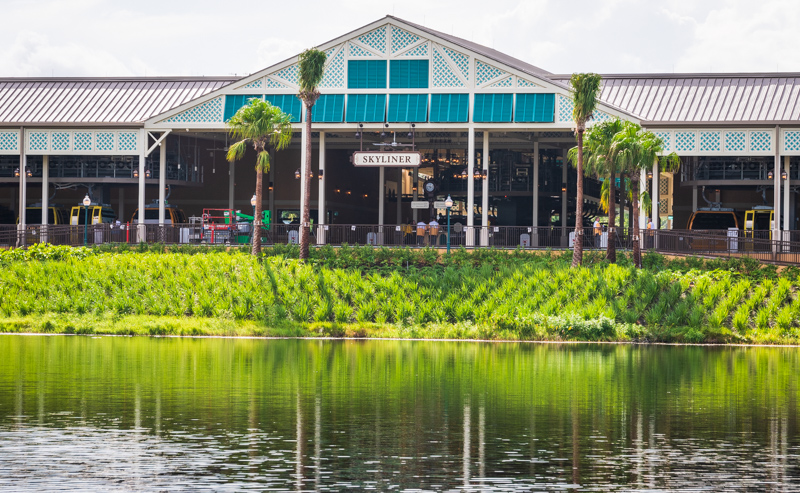 It’s hard to tell from the photos, but there were also a ton of managers on hand, presumably on hand to observe things and train ahead of the first ‘real life’ tests starting today.

Pretty exciting to see the construction crews all gone and Cast Members take their place. It’s finally getting real!

All of the projects we previously reported on at Caribbean Beach Resort are now finished.

The new walkways are totally done, the bus loop has all of its signage up, and landscaping here looks nice. Caribbean Beach’s main hub is totally ready to go. 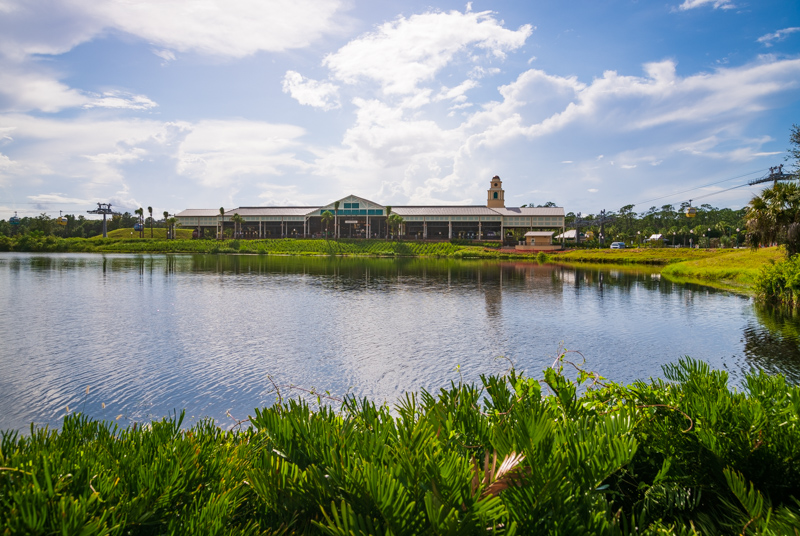 After ducking inside of Spyglass Grill to wait out a 15 minute downpour (and also do a “quality-check” on the Chorizo Burger–yep, still glorious!), I headed back out to make another loop around Barefoot Bay.

There’s really not much else to see here. This station is totally done and, aside from minor work around the parking lot, the Riviera’s station is done, too.

Personally, I couldn’t be more excited about this…which I think is fairly evident to anyone who has read these Skyliner updates over the last couple of years. I’l admit that I’m also slightly apprehensive about the guest response, as I’ve written a lot of strongly opinionated, pro-Skyliner material over the course of these updates…and I really hope all of that is vindicated. Even if others end up hating the Skyliner for their own reasons, I can’t wait to experience this myself and know I’ll love it. I’ve yet to experience a gondola that I haven’t loved, and can’t imagine Walt Disney World’s system will be the first to buck that trend.

Are you excited to experience the Skyliner? If you’re a Cast Member who has had a chance to ride…any first-hand review or feedback? Any other thoughts on the Skyliner? Will you be using it, or sticking to buses? Any questions we can help you answer? Hearing your feedback—even when you disagree with us—is both interesting to us and helpful to other readers, so please share your thoughts below in the comments!