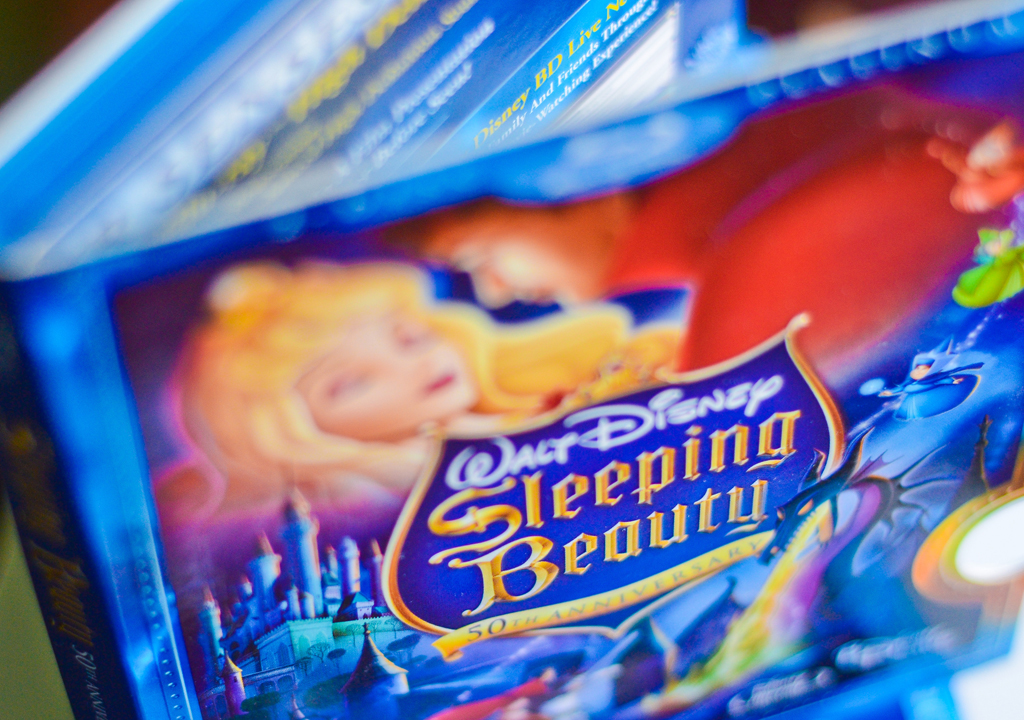 Sleeping Beauty was Disney’s first animated classic to be released as a Platinum Edition Blu-ray. Although subsequent releases escalated in status to “Diamond” edition (wait, that is better than platinum, right?), there is nothing subpar about this release.

Some who follow Disney animated releases, myself included, were a bit surprised that Disney would choose this as its first Blu-ray release. After all, the DVD releases seemed to follow some rough popularity ranking, with the titles that would sell better seemingly being released earlier. Based upon that, I assumed that the Blu-ray releases would be re-releases of the DVD releases, following roughly the same schedule. Given that, I was surprised and pleased that Disney was giving a new title the ‘hot commodity’ treatment.

, I had not seen Sleeping Beauty as an adult. Again, I was pleasantly surprised. Everyone knows the story, even if you haven’t seen the film. However, the artistic depth of the film was astonishing, with brilliant medieval art and amazingly detailed backgrounds. The story, while great, took a backseat to the amazing artistic accomplishments of the animators. On that basis alone, I can see why Disney wanted Sleeping Beauty to be its first Blu-ray release. Most people in the general public probably thought a 50 year old movie certainly couldn’t look that much better on Blu-ray, could it?! Yeah, it could. And then some.

The 1080p transfer here (in its original aspect ratio for the first time ever) is nothing short of amazing. This is a 50 year old film?! The restoration team at Disney did an amazing job, as the picture is crisp and sharp once you get past the opening credits, and the color rendering is amazing. To get a real sense of the transfer quality, watch and re-watch the battle scene with Maleficent as the dragon–it’s quite impressive.

When I first heard that the sound would be remastered in 7.1 surround sound, I was a bit weary. The original film was 2.0 surround, and Disney has a reputation for acting too aggressively with sound remasters. However, both the remixed 2.0 track and the 7.1 track sounded excellent, with each channel complimenting the others excellently. No sound was out of place or gimmicky, which was my main concern going in.

As for extras, hold onto your hats and glasses, because they’re quite impressive. John Lasseter. Leonard Maltin. Together on a commentary. Need I say more? Listen to the commentary ‘over’ the film or enable the Cine-Explore version, which brings up a neat picture-in-picture mode. The Oscar-winning “Grand Canyon” is also included. Although it’s starkly different in nature, this 30-some minute dialogue-less short for some reason reminds me of the Twilight Zone episode, An Occurrence at Owl Creek Bridge. It’s definitely worth checking out. Disc one also includes trivia, a CGI dragon encounter, some pop remake of “Once Upon a Dream,” and trailers.

Disc Two includes more content, some of which is ported from the previous (non-Platinum) DVD release. “Picture Perfect” is a long making-of documentary, which will give you great insight into the film. As companion pieces, of sorts, to this, there are three feaurettes, each focused on the artistic process. My personal favorite is “Four Artists Paint One Tree,” which showcases the work of the artists who brought the film to life, and created such vivid and detailed backgrounds. For Disneyland fans, “Disney Walkthrough Attraction” is a great extra, as it gives a history of the old Sleeping Beauty walk-through attraction (that has since been redone and reopened in Sleeping Beauty Castle). Also included is an episode of “Disneyland” featuring Sleeping Beauty, games, deleted scenes, storyboards, and image galleries.

Overall, Sleeping Beauty: Two-Disc 50th Anniversary Platinum Edition Blu-ray truly stands the test of time. Reviewing it a few years after its release (and after the release of subsequent Disney “Diamond Editions”) I have the benefit of comparing it to other subsequent releases in my collection. It compares quite favorably. Disney’s Diamond Edition department is much like Pixar–a home run machine. Even its worst work (and this is definitely not on the lower end of the spectrum) is better than most studios’ best work, and Sleeping Beauty is definitely a must-own title for art, animation, and film buffs alike.

Give the gift of Sleeping Beauty: Two-Disc Platinum Edition Blu-ray/DVD Combo – purchase it today at Amazon.com!