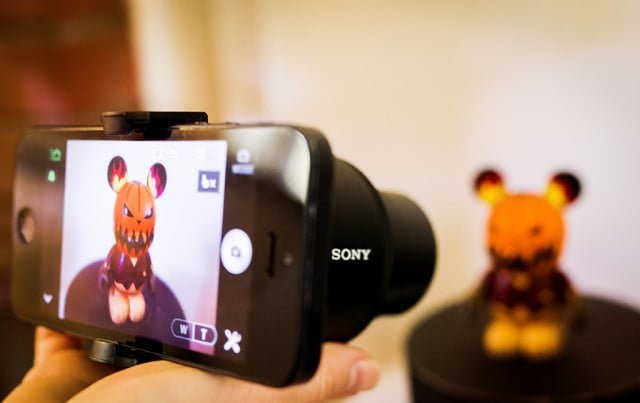 The Sony QX100 and QX10 are first-of-their-kind “lenses” for camera phones that interface with smart phones, effectively using their screen as the camera’s interface. The higher-end QX100 offers the same 20MP 1-inch sensor and fast f/1.8 Zeiss zoom lens for the best image quality of any point and shoot camera. The 18.2MP sensor in the QX10 is good, but not as impressive. Instead, this lens-camera offers more zoom (10x) at about half the price of the Sony QX100.

As soon as the lenses were announced, Sarah decided to preorder the QX100. She’s big into iPhoneography and Instagram, and the idea here was that this would provide better quality photos than her current combination of the iPhone 5 and olloclip. We both really wanted this product to be great. Unfortunately, it is not. (While this review specifically focuses on the QX100, it applies to the QX10 as well.)

I’ll get my criticism of the concept out of the way first. This might be marketed as a lens for a phone, but it should be called what it is: a camera that is controlled by a phone. Essentially, it’s the Sony RX100 II repackaged to look like a lens. It’s an innovative product, but I think the true innovation here is convincing people who like taking photos with their phones but arbitrarily don’t like cameras to purchase this.

I can’t really think of any advantage this has over a stand-alone point and shoot camera with a wireless memory card or that has built-in WiFi. Perhaps the ability to remotely control the camera, allowing shots in unique angles or from distances (or the coveted “selfies” that are so popular on Instagram), but while this can be touted, I can’t think of many real world use cases where this would be important…and would need to be accomplished with this type of set-up.

Other advantages? As best as I can tell, there are none (at least, not over a stand-alone point and shoot). There are plenty of disadvantages, though. The first is the app. The Sony PlayMemories app is awful. It crashes, it freezes, it lags, and its functionality is a bit handcuffed. I don’t want to fixate on the app too much, because Sony could release an update tomorrow that addresses all of these concerns. Instead, note that if you buy the camera today, using the app will be a serious pain.

Instead, let’s assume the app functions as it should (this is a mighty generous assumption given all of the problems with the first generation of the app) and address the other drawbacks of the QX100. The first is lag-time. The time it takes to turn on the camera, connect to your phone (via WiFi), and then take a photo is about 30 to 45 seconds, depending upon how quickly the phone picks up the lens. This is significantly worse than even the worst stand-alone camera. If there is any type of spontaneous or in the moment shot, you can expect to not capture it with the Sony QX100.

The alternative would be to simply leave the lens on and connected at all times, so you’re always ready. The problem with this is that the QX100 is a serious drain on your camera’s battery. If you do this, expect less than an hour of battery life from the iPhone 5. Even if you turn it off between shots, if you’re regularly using the lens throughout the day, you will quickly drain your battery. We have not used this at Walt Disney World, but I suspect in order for Sarah to make it through the day, we’d need to get another (we already own one) spare iPhone battery.

Beyond that, the controls and functionality of the lens are sparse as compared to a stand-alone camera. This probably won’t be a huge deal to the target audience, but I find it incredibly disappointing given the raw power of the guts of this lens. The Sony RX100 upon which it’s based is the best point and shoot camera on the market, and taking away some of its best features (such as the ability to shoot raw) is disappointing.

There are some upsides to the camera. Namely, that it has the innards of a Sony RX100 II. Because of this, photo quality is exceptional. Straight out of camera, it compares very favorably to photos from the RX100, although thanks to the RX100 supporting raw, the latitude when editing photos is greater with the RX100. The point stands, though, that the photos that can be produced with this camera are significantly better than the built-in camera on any phone, or on any point and shoot camera that isn’t the RX100, for that matter.

Sarah and I both agreed that this was the great strength of the camera, along with the ease of using the photos within the phone once the photos have been captured. This is easier than any WiFi alternative (even if the process of capturing the photos in the first place is difficult), and it does show the potential of the system. Once the photos were in the iPhone, it was easy to open them up in Snapseed, edit, and post them to Instagram. Every photo in this article was edited on the iPhone in Snapseed, and the “processing” took about 30 seconds for each photo. (The photos could look significantly better if edited on a computer, but I figured it was more accurate to edit them how most users of the camera will edit.) So it’s really a useful device when it comes to getting photos shared quickly. But…I can’t say it’s any more useful than the alternatives out there, it has just attracted more attention because of its gimmicky “lens” packaging.

While I think there is some potential for this concept, ultimately, I think it is a gimmick as of right now. At the end of the day, it is a camera, and although it’s packaged differently, it’s no smaller than a camera. I think it’s most going to appeal to those who aren’t interested in a camera for whatever reason, but they should know that’s exactly what this is, with the only exception being that the camera alternative to it performs better and won’t drain their phone batteries.

As I understand it, the appeal of iPhoneography (or phone-photography…whatever you want to call it) is that it is a quick way of using the phone to capture moments in time. This cannot do that. I know more “serious” Instagram users won’t post any photos not taken with their phones, and perhaps this is a “loophole” for some of them, but ultimately, using it is not using a phone to capture photos. It’s using a camera that uses the phone’s screen as an interface, and can wirelessly transfer photos to it.

Sarah is a little more optimistic about the device. She believes it has a place as a middle ground between carrying just a phone as a camera and carrying an additional point and shoot. She thinks there’s potential for the concept, but agrees that the execution of the first generation leaves a lot to be desired, and she also wouldn’t recommend it. While I concede that the concept does have some potential, I think significant strides will need to be made in the second generation to make it viable. Perhaps the cheaper, QX10 is a better option, and perhaps the next generation will be better if the problems here can be addressed and the lens can be made smaller (giving it an actual advantage over carrying a separate point and shoot).

Overall, I’m not really sure the Sony QX100 camera is a good option for anyone. I think a lot of people will be impressed by the gimmick of the camera being “a lens” that attaches to a phone, but I think once you look past that, you’ll see that there are far better alternatives that can accomplish the exact same thing. Those who want to quickly share via social media should purchase the Sony RX100 II, which has WiFi and offers all of the strengths (plus many, many more of its own) of the QX100 with none of the drawbacks, or a camera with a WiFi memory card. I recommend the original Sony RX100 (read our review of that for my glowing praise of it–all of which still rings true today) plus an EyeFi card as the most cost-effective option (the original RX100 is cheaper than the RX100 II). If for some reason, despite this review, you are dead-set on purchasing one of these, my recommendation would be to hedge your bets and get the cheaper QX10. While it lacks the same sensor quality that the QX100 has, it’ll be a noticeable upgrade over your phone’s camera that is more versatile, and not as big of an investment. Even if Sony addresses the issues with the app via updates, it’s hard to imagine that battery life and lag-time are something that can be fixed with this generation of the QX cameras. It’s a neat idea, and it shows that Sony continues to push the envelope when it comes to photography, but this was an innovation that, I think, just wasn’t needed.

If you’re interested in improving your Disney photography, check out a few of my top photography blog posts:

Do you own the Sony QX100 or QX10? If so, what do you think of these devices? Planning on purchasing despite the review? Hearing from you is half the fun of these articles, so share your thoughts and any other tips you might have in the comments!