While working on our Tokyo Disney Resort Trip Report earlier this week, I started going off on a tangent (as is often the case), and realized it might be better off as my main ‘essay’ in the weekend update. The tangent was actually inspired by the announcement of Jingle Cruise coming to Disneyland and Walt Disney World, and it’s a scenario we’ve seen play out time and time again as news is released or leaked, analyzed, and preemptively deemed terrible or praised as brilliant by fans online. Which leads to my question…

Is the Internet Harmful to the Disney Experience?

Every year as a child, starting in 1986, I went to Walt Disney World with my parents in the spring. We lived in the snow belt of Michigan, and it was nice to get away from the “Lake Effect Snow Machine,” as I remember the local weatherman calling it. All of these trips were in the pre-internet days. One of my earliest memories was visiting in 1992 and seeing the construction for Splash Mountain and the signs announcing that it was “coming soon.” I don’t remember that area of the park before that, but I do remember going back in 1993 and riding it for the first time. Same thing happened with Tower of Terror and Alien Encounter. My entire knowledge of the construction of these attractions extended to signs in the parks, billboards as we drove down, and the Disney Radio (“Florida’s In-Car Welcoming Station“) that came into range about 30 minutes from Walt Disney World.

Going into those experiences blind made them entirely new, without any “spoilers” or preconceptions. Although I highly anticipated each of these additions, I wasn’t fixated on them nor did I know any details, real or rumored. I was essentially a blank slate, with impressions formed solely based upon the experience at hand. My memory of this sense of excitement has led me–to this day–to never watch a ride-through video of an attraction before experiencing it myself, in person.

Being a part of the online Disney fan community makes it impossible to avoid spoilers completely, and even without watching video of an attraction, I know plenty about it before experiencing it. To some degree, I even have an opinion of it before experiencing it, or at least some preconceived notions. I am firmly in the camp of “withholding judgment until I experience it,” but being exposed to so many opinions online prior to that does tend to prejudice or at least skew thinking, even if only subconsciously. I’ve been wrong enough times about Disney additions when judging them before the fact that I’ve mostly learned to avoid doing this, even if I still do judge a bit in terms of concept, thematic fit, etc.

Setting aside opinions, the amount of information we’re exposed to before an attraction’s opening creates expectations. Part of this is on Disney, and part of it is on us as fans. For years prior to its opening, Disney hyped up New Fantasyland as the “biggest expansion in Magic Kingdom history” and slowly fed fans tidbits of information and ‘sneak peeks’ of the project. Likewise, fans discussed the project endlessly via social media, and it seemed like almost every fan blog had weekly construction update photos, further fueling the fire. This continued (and still continues, I suppose) for over three years.

I don’t care what it is, if you’re anticipating something for that long and are constantly discussing it, chances are the actual experience is not going to live up to your expectations, no matter what you’ve told yourself about not having an opinion before experiencing it. (And this post is certainly not written to defend what I consider to be a thus far underwhelming New Fantasyland, it’s just the best recent example for making my point.)

It isn’t just big additions, either. Nowadays, we know so much about every little thing going on, and have the chance to dissect every change and addition to death before even insignificant changes have been made.

I’m not completely condemning this, as I do think that active, constructive criticism from the fan community has led to certain positive decisions and even has caused Disney to revise plans. At the same time, though, are we our own worst enemies? Does our constant fixation on and knowledge of the goings on of the parks take away from our enjoyment of them? Would that sense of discovery with new experiences, and a completely blank slate going into them, be better for us? Would it be a good thing for us to step away from the rumor mill, to avoid the construction photos, and just see everything “fresh” (or close to it) in person?

To some degree, there is no going back. We can’t “uncreate” the internet. If we want to participate in the fan community, we will be exposed to certain things. I think many things are beneficial to know before going (so don’t stop reading this blog, you NEED to read it, dangit! ;)), and a dialogue about the parks is good, but is our tendency towards analysis of things that don’t yet exist, or even minor existing details, healthy for our enjoyment of the parks?

These are all actual questions and meant to be an open dialogue with you–not rhetorical writing devices. I’d love to hear some of your thoughts on this. 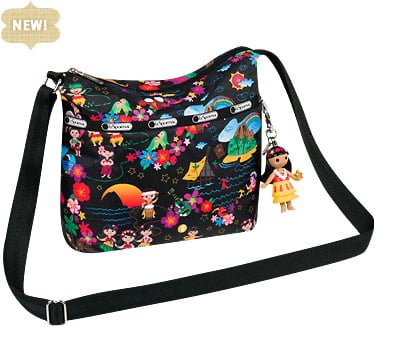 We mentioned this giveaway of a LeSportsac ‘it’s a small world’ on Facebook bag earlier in the week, and here it is! One winner will come from the giveaway widget-thing below, one will be picked at random from our newsletter mailing list. (So subscribe if you haven’t already.)

a Rafflecopter giveaway
Read the newsletter this week to find out whether you won!

Our photos this week on TravelCaffeine include Kyoto, Walt Disney World, and Great Smoky Mountains National Park. Plus, I did an essay on why Professional Photographers are an Endangered Species.

A lot of people ask us about vegetarian options, and we have no clue. Fortunately, for those interested in vegetarian stuff at Food & Wine Festival, Disney Food Blog has you covered!

ImagineeringDisney has an awesome post about a fan-made 1/87th scale Splash Mountain model. This is some really incredible work!

Gorillas Don’t Blog takes a look at the Chicken of the Sea Pirate Ship at Disneyland with a few gorgeous photos.

If you’ve written or read a good blog post recently (or know of any meet-ups, etc.), please share a link in the comments of this article. Hopefully this will help me find great new blogs to read and feature in future “Cool Linkage” sections, and also send a bit of traffic your (or their) way!

Have any comments about this update? Do you think internet interactions have changed expectations and experiences for Disney fans? Have a vote for our Wild Card Wednesday blog post? Have any of your own blog posts to share? Leave your thoughts in the comments!