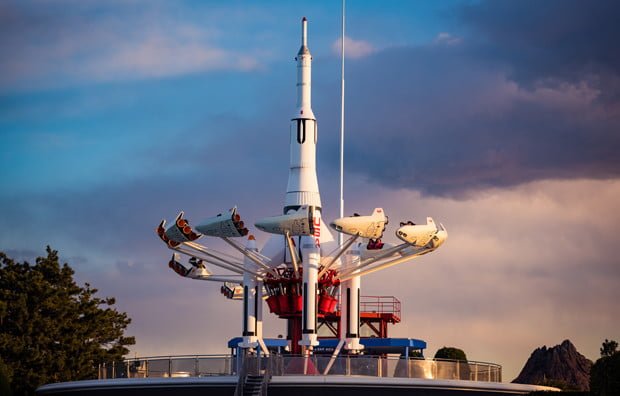 It’s the end of a Disney theme park era: the last StarJets attraction closes today (October 10, 2017). Is a post paying tribute to a spinner attraction that was long-ago retired at Walt Disney World and Disneyland excessive?

Eh, probably. At Disney Tourist Blog, something being “unnecessary” has never stopped us from babbling about it, so here we are. Plus, I have a few cool photos of StarJets that I don’t think I’ve previously shared.

StarJets shaped the skyline of Tomorrowland at Tokyo Disneyland since the park opened in April 1983, and the attraction has an even longer history around the world. In order to understand StarJets’ place in Disney history, let’s take a trip back in time (AND SPACE!) and look at its legacy elsewhere…

The attraction’s roots date back to March 1956 at Disneyland, less than a year after that nascent park opened. There, the first ride of this sort went by the name Astro-Jets, and was stylized in a way that would feature heavily in Disneyland’s celebration of the Space Age.

In Walt Disney’s original Tomorrowland, the Astro-Jets replaced the Court of Flags, a formation of 48 flag poles flying the flag of every state of the United States. The Astro-Jets were themselves replaced about a decade later in July 1967 with the Rocket Jets, which debuted atop the NASA launchpad above the PeopleMover. 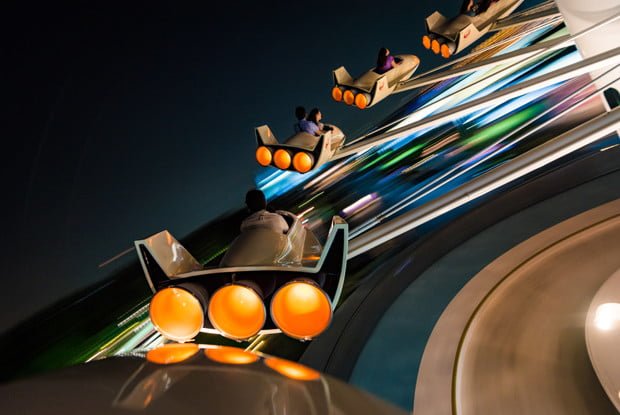 About the only noteworthy differences are that Tokyo’s elevated version was not elevated above a PeopleMover (but rather, the Space Place FoodPort) and this version is sponsored by Japan Airlines. 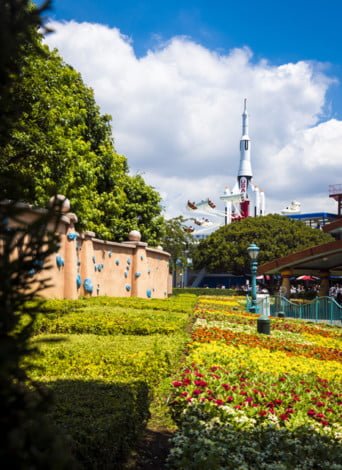 The similarities at Walt Disney World mirrored those at Disneyland, as the Star Jets in Magic Kingdom were also elevated above the PeopleMover, and also had an identical design to the version cloned to Tokyo Disneyland. The Magic Kingdom version also utilized an elevator to access the elevated Star Jets.

Both Disneyland and Walt Disney World lost this incarnation of the attraction in the mid-1990s due to the New Tomorrowland project, which brought with it Astro Orbiter (or Orbitor). Same idea, but with a different aesthetic. If variations of these attractions still exist in Florida and California, why does anyone care? 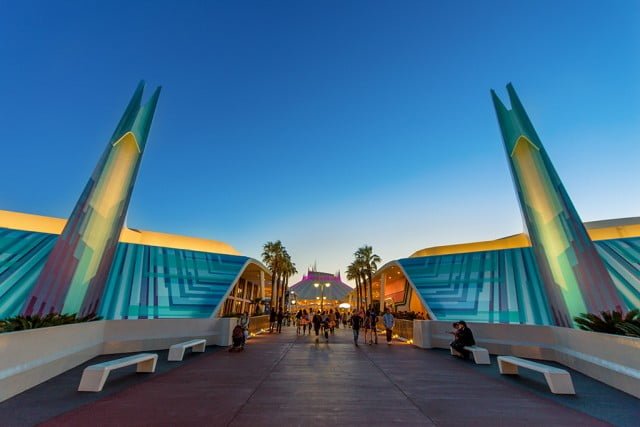 For many Walt Disney World and Disneyland fans of a certain age, I think it’s largely a matter of nostalgia. Probably not just nostalgia for StarJets, but for the crisp, clean aesthetics of the bygone Tomorrowlands the attraction represent.

Outside of the spires at the entrance to Tokyo Disneyland’s Tomorrowland, this is a focal point design-wise for those pre-1990s incarnations of Tomorrowland. 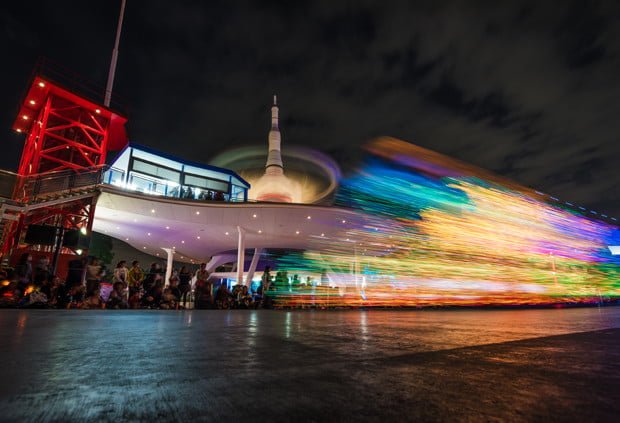 For many Disneyland and Magic Kingdom fans, those lost versions of Tomorrowland represent a better version of what now seems like a perpetually-dated and thematically-lacking corner of the park.

I’d include myself among this group, and seeing old photos of Tomorrowland–particularly Disneyland’s version–makes me wish New Tomorrowland never happened. If attractions could’ve just been updated while keeping the basic style, we could still have that ever-green design. 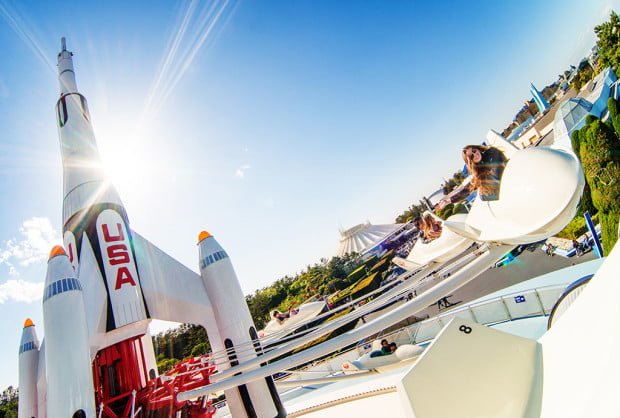 To me, the linchpin of success for any Tomorrowland is not the precise substance of its attractions and whether those remain relevant visions of the future, but it is in a land that evokes a romanticized sense of progress and optimism. For this, architecture that simply looks futuristic is necessary.

Certain styles of architecture embody themes of futurism and progress, regardless of their age. Despite being over 60 years old, I’d still describe both the Stahl House and Kauffman Desert House as looking sleek and modern. By contrast, more recent designs from the 1980s and 1990s look like time capsules of those decades, which are (part of) the problems these Tomorrowlands face. 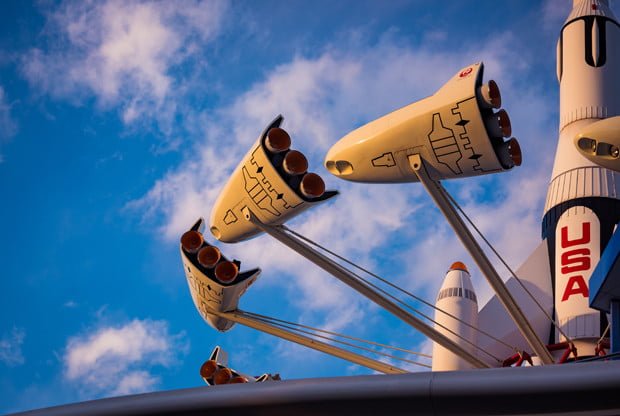 It’s this wistfulness for that lost Tomorrowland that makes fans like me fond of the StarJets–they represent that lost design. The problem is you can’t go home again.

StarJets might exemplify what we miss in Magic Kingdom and Disneyland, but that Tomorrowland has exactly the same problems as its U.S. relatives. It’s a design hodgepodge, features a variety of ill-fitting attractions and clashing styles. 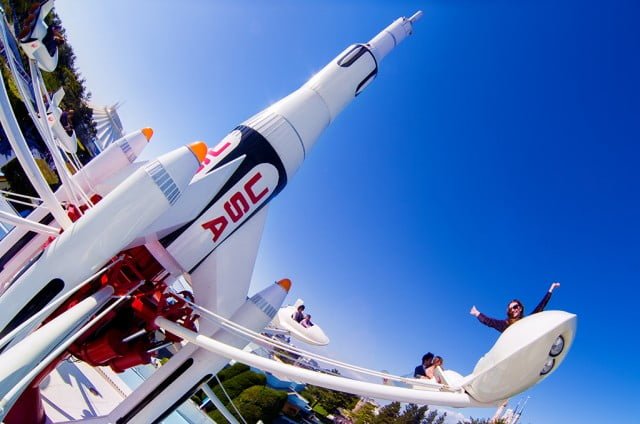 Despite a few design touches that remain wonderful (I hope those spires never disappear and the rest of Tomorrowland receives placemaking to better-fit that aesthetic), Tomorrowland at Tokyo Disneyland is every bit the mess it is in Florida and California.

In Japan, part of the problem is the sprawling layout of the land. It’s essentially one very long corridor, “transitioning” from Monstropolis to an alien outpost to sections of futuristic design. 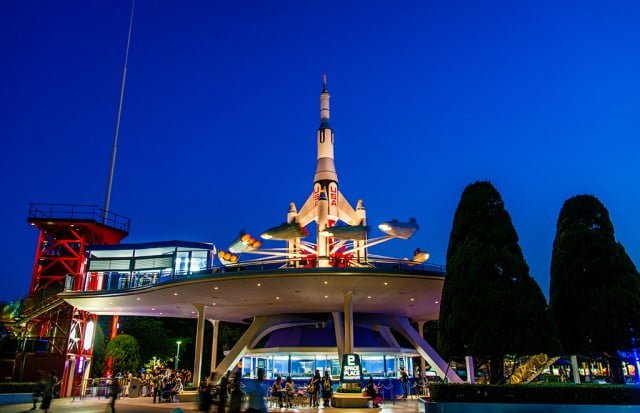 This is why, although I’ll pour one out for StarJets (proverbially, with this post), I’m more looking forward to the future. The ambitious New Fantasyland project at Tokyo Disneyland will expand its most popular land, while adding a Beauty and the Beast sub-land with a $750 million price tag. (The attraction in that land is being described as a “Mega E-Ticket.”)

This Beauty and the Beast area of Fantasyland will swallow part of Tomorrowland. That’s a bold move, but I think it’s the appropriate one. If you walk from Monsters Inc Ride & Go Seek all the way to StarJets, you get the feeling that Tomorrowland is interminably long. That, coupled with the clashing identities, necessitated some type of big change. 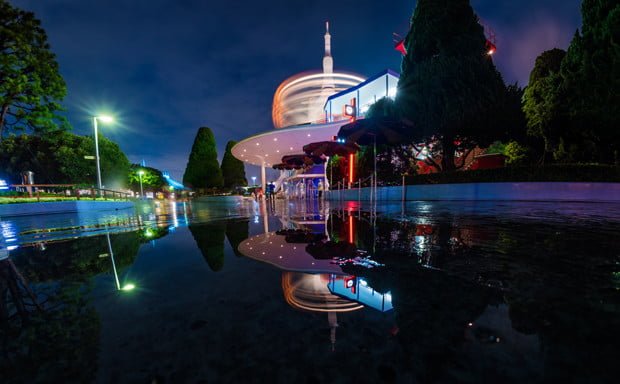 While I wish that ‘big change’ could’ve occurred at the other end of Tomorrowland, where the aforementioned Monsters Inc. and Star Tours attractions are the biggest thematic-offenders, the reality is that those attractions are incredibly popular (and well done).

By contrast, StarJets has had a long run, and is not nearly as beloved. And, it’s receiving a fond farewell from fans and the park, and there are even a few pieces of merchandise to commemorate the “Final Mission” of StarJets. 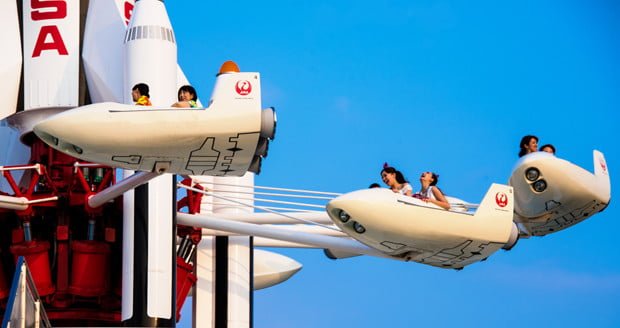 In other words, it’s the end of an era for Tomorrowland, but for Tokyo Disneyland, it also marks another milestone towards the beginning of a new era. New Fantasyland there is another step away from cut and paste clones from the U.S. parks that typified its early years, and a step towards the wonderfully immersive environments that Tokyo has been perfecting since it added Critter Country, and really refined with Tokyo DisneySea. If losing StarJets is necessary to gain better-themed and more engaging spaces at Tokyo Disneyland (and it is), that’s a trade-off I’ll take in an instant.

Do you agree or disagree with our advice? Any questions? Hearing feedback about your experiences is both interesting to us and helpful to other readers, so please share your thoughts below in the comments!