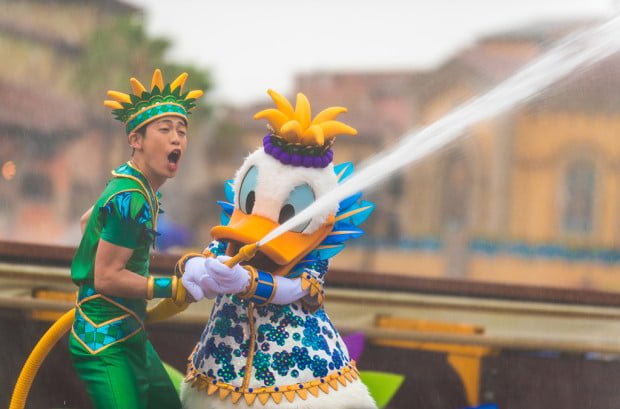 Summer Festival at Tokyo DisneySea is the park’s way of keeping guests cool with a tropical and Latin-themed special event that is best described as “colorful” and “wet.” Unlike Natsu Matsuri at Tokyo Disneyland, this is in no way like a traditional Japanese summer festival. It’s really just vibrant fun, with a tropical flair. This post features some of my photos and thoughts, along with tips for the Summer Festival for those of you visiting Tokyo DisneySea in the summer months.

Tokyo DisneySea’s Summer Festival runs during most of July and August, this year simultaneous to Journeys with Duffy. Like Natsu Matsuri, its main show is a water carnivale that involves soaking guests to keep them cool during the incredibly hot and humid summer months.

I previously described Natsu Matsuri as a “hoot” and if that is a hoot, there isn’t a word to describe just how fun Minnie’s Tropical Splash during Summer Festival is. While I’d say the decorations definitely aren’t on par with those in Tokyo Disneyland (but that could be because I really like that ‘East Meets West’ vibe that the park has during its traditional Japanese celebrations), the entertainment totally makes up for it.

Why is Summer Festival such a blast? Let’s take a look… 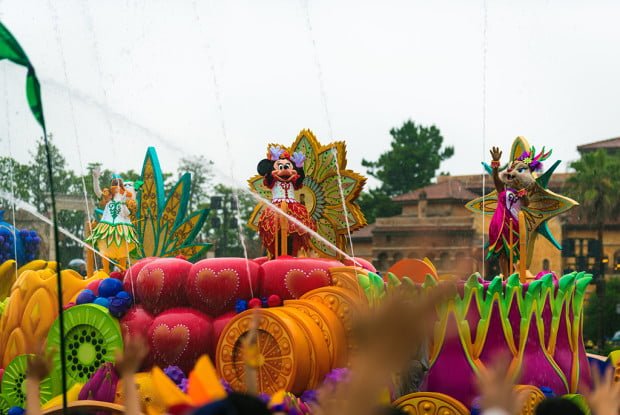 We will start with the unequivocal highlight of Summer Festival, and that’s Minnie’s Tropical Splash, the harbor water show that runs several times per day. What is this show about? Heck if I know. I’d compare it to another Japanese favorite of mine, the Robot Restaurant (which I previously described as an acid trip dinner show straight out of the mind of Hunter S. Thompson). Minnie’s Tropical Splash is like a wholesome, family-friendly version of that. 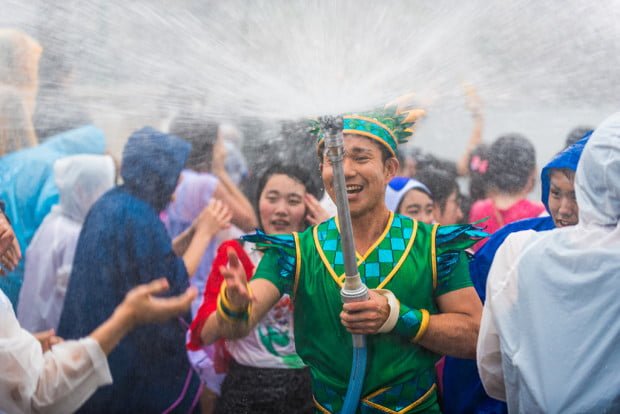 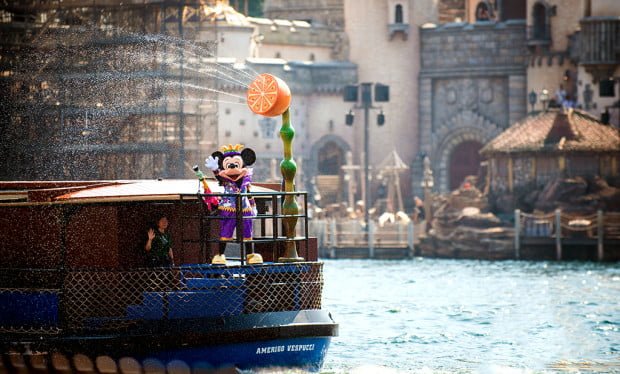 This is all way more awesome than it sounds. I would say that you should think of it as a rave, Disney style, but if your closest frame of reference for that is the awful dance parties in the Magic Kingdom, that won’t work. There’s really no comparison that won’t make this sound lame or like something adult that’s inappropriate for Disney. It’s neither. It’s just unbridled fun. Watch this video to get a better idea, but just as words don’t do this justice, neither does video. 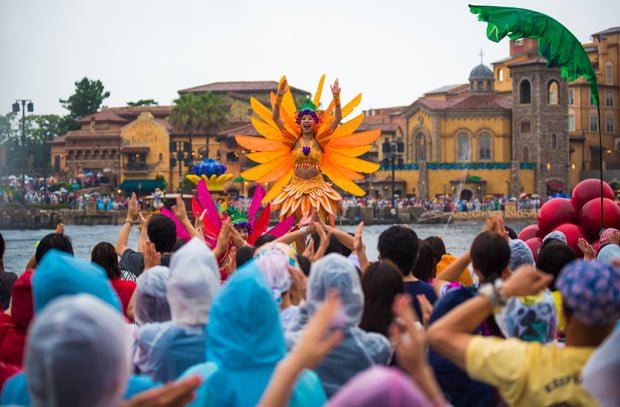 Rather, this is about the palpable energy of the crowd, and the feeling you get as you’re dancing to the beat of that catchy music, moving around among an excited crowd, and experiencing the adreneline rush of “worrying” whether the dancers will throw a bucket of water on you. That’s right, buckets of water could be dumped on you during this show. Between that and the fire hoses that spray guests, you’ll definitely get wet. 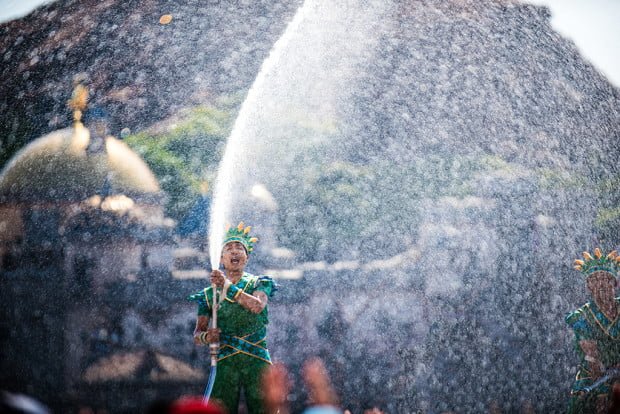 Pack rain suits and dry bags for anything you don’t want ruined (unless you go to the far side of the harbor or stand farther back in a dry zone). This show might sound totally unappealing, but it’s an awesome experience. It’s ostensibly ‘tropical’ in theme, but in reality, this is the epitome of bizarre Japanese entertainment. I loved it. 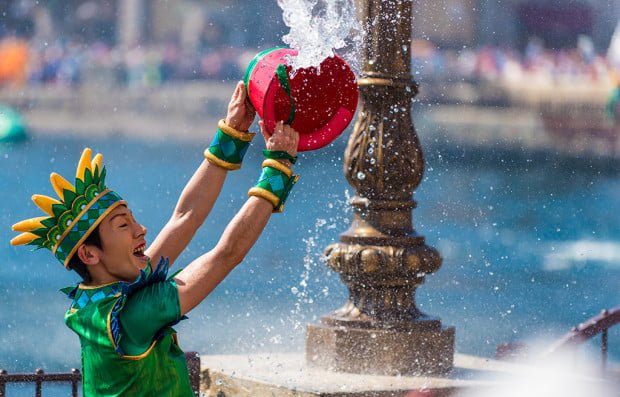 I think Disney has found its villain for the next animated feature: a slender man wearing a crown of bananas who laughs maniacally as he uses his evil watermelon bucket to dump water on people, stunning them while he steals their bananas for various nefarious purposes. I think the name Mr. Bananagrabber has a certain ring to it. I’ll let Disney retain animation rights, but I want spin-off rights. 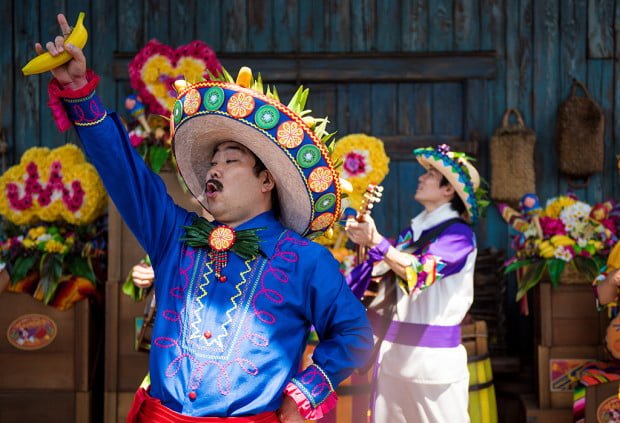 The other entertainment is “Fruta! Fruta! Fiesta!,” which is a Latin band that plays in Lost River Delta to celebrate the bountiful harvest of fruits. The area where they begin their performance is decorated with colorful ribbons and crates of fruit, located in front of Miguel’s El Dorado Cantina.

After a song or two outside, this band goes in to Miguel’s El Dorado Cantina and performs in the downstairs seating area. This is a really nice treat for guests already there, but it seemed odd to me that they would so quickly go inside as it turns into something a willing audience can gather to watch to surprise entertainment as an add-on for guests eating their meals. The other problem here is that (at least during my visit), these performances are not on the times guide. I had to ask a couple of Cast Members before I found someone in entertainment with a listing of performance times. 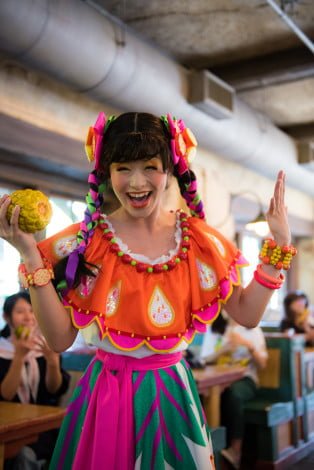 All of this is really too bad, as this band is excellent. They are talented, enthusiastic, and engage the restaurant patrons really well. At one point in the show they hand out fruit-shaped maracas, and the female emcee goes around and uses her charm on people in the crowd. She does a really great job, and even sang to me in English. 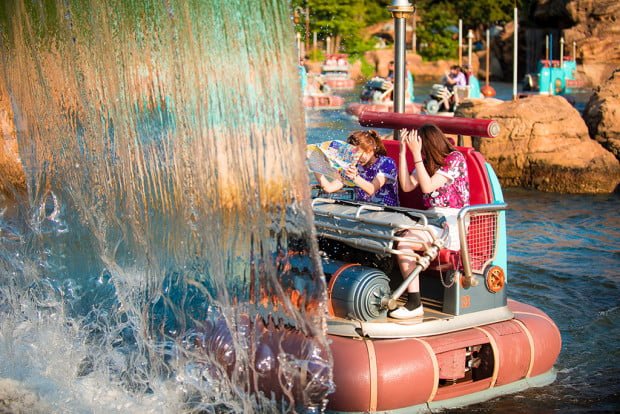 There’s also the “get wet” courses on Aquatopia, where hidden water gets spray guests as they come to certain points of the course. This was the first water-thing I did at Tokyo Disney Resort, and I did not anticipate how “aggressive” they would be with those water jets. Suffice to say, I was wet for a couple of hours afterwards, but it did spice up Aquatopia a bit. Just look at how much “fun” these guests are having!

Aside from that, it’s mostly just merchandise, food, and ambiance. The decorations don’t really add a ton to the ambiance in Tokyo DisneySea. There’s some items with a fruit motif near the entrance, and then a small area in Lost River Delta, and that’s about it. Nothing so well done or compelling that you’ll want photos of it, but what is there is cute, I guess. 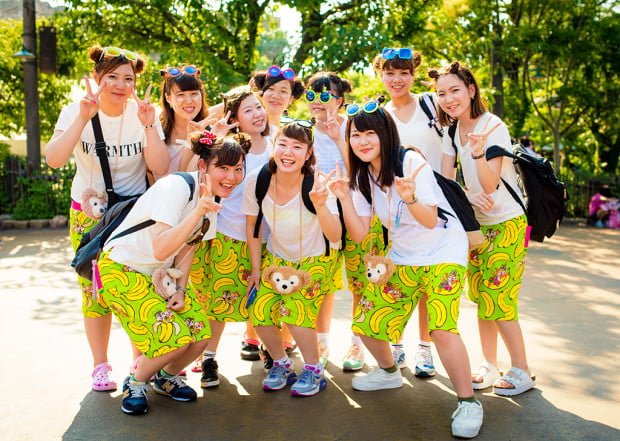 In terms of merchandise, the greatest piece of Disney merchandise known to mankind was bestowed upon us thanks to Summer Festival at Tokyo DisneySea. I’m talking about the world famous Banana Shorts. These are made of some sort of space age material that dries quickly, are neon green with artfully placed bananas and characters, and have a design that would Giorgio Armani green with envy. It is finished with luxurious watermelon pockets on the back, really taking the piece to the next level.

Some people might call this the forward-thinking piece of couture that will redefine fashion for the next decade. As with all creative fashion, some uncultured folks might call this ugly or garish, but the stylish Tokyo audience really embraced it, as I spotted several groups of young guests all wearing these shorts. I really regret not getting a pair.

Other merchandise and food is also available–you can see the menus and merchandise listings on TDR Explorer. 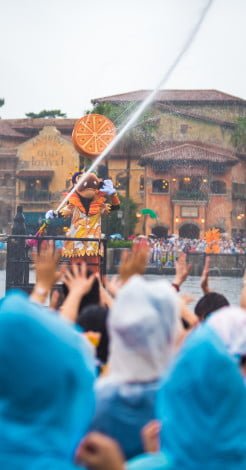 Overall, Summer Festival at Tokyo DisneySea is fun on a smaller scale than other seasonal events. It’s anchored by Minnie’s Tropical Splash, which is one of the most enjoyable and ridiculous pieces of Disney entertainment I’ve ever seen. Without that…honestly, I’m not sure this Summer Festival would be anything noteworthy. The Fruta Fruta band is practically hidden, and decorations are sparse. This is less noticeable because Minnie’s Tropical Splash is awesome and the decor is buoyed by Journeys with Duffy, but the event could definitely be rounded out a bit more.

Does Summer Festival at Tokyo DisneySea look interesting to you? Have you visited Tokyo DisneySea during the summer? What did you think of Minnie’s Tropical Splash? If you have any other comments or questions, post them below and I’ll try to answer!