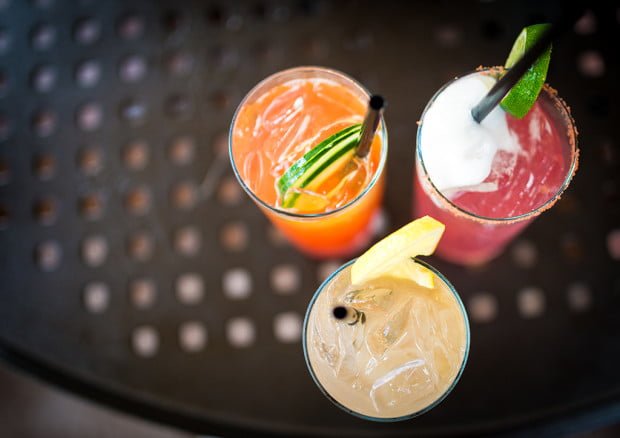 Off the Hook Bar & Lounge is the poolside bar at Aulani, A Disney Resort & Spa in Hawaii. Calling it a poolside bar is a bit deceptive, as Off the Hook actually has a pretty good lounge food menu that gives other restaurants at Aulani a bit of a run for their money.

In terms of theme, there’s not much here. It is loosely designed to resemble a Hawaiian fisherman’s seaside shack, with some decor meant to evoke this theme. Given the painstaking level of detail Disney’s Imagineers otherwise put into making Aulani such a beautiful resort, Off the Hook is a bit of a letdown. Being reasonable, though, this is an open air poolside bar and the views out into the Waikolohe Valley pool area are really all you need.

More importantly, what about the food? Let’s take a look… 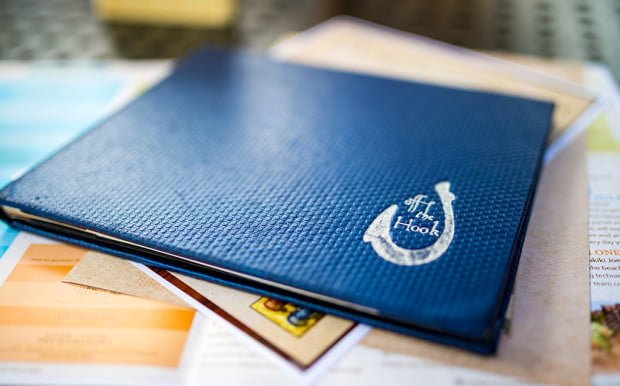 Off the Hook’s menu has several specialty drinks that are essentially Hawaiian twists on familiar, fruity drinks. Likewise, the food menu is mostly American cuisine with a slight Hawaiian twist. 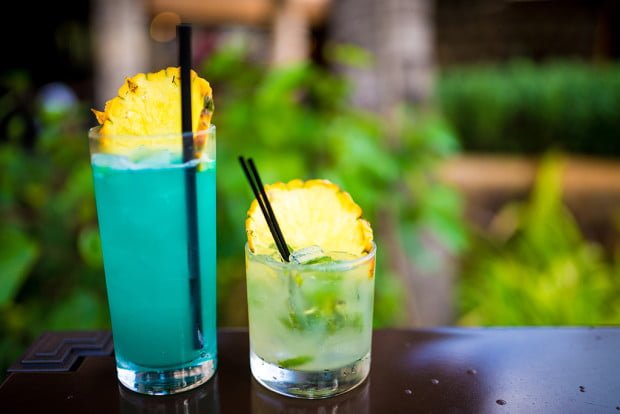 We sampled a number of different drinks in name of “research” to scientifically determine which offered the best intersection of taste, value for money, alcohol content, and buzz quality… 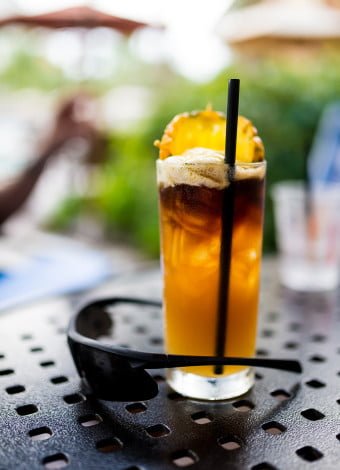 …Unfortunately, we did so much research that we forgot the results of said study. 😉

Kidding. The Big Island Iced Tea was the best option for ‘strength’ and the Blue Hawaiian was the favorite in terms of taste. These drinks were better than what you’d find on the Disney Parks Generic Bar Menu, but they are still fruity mixed drinks. 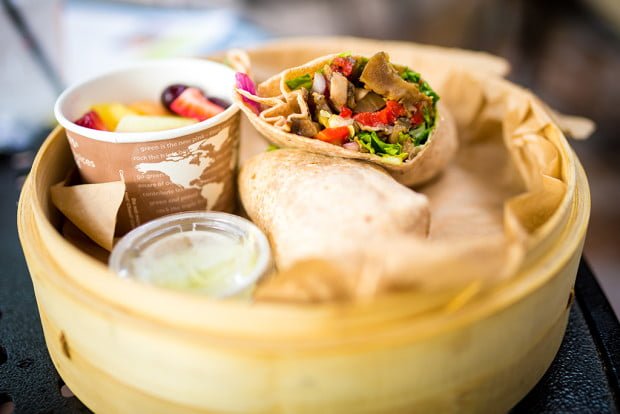 While the drinks were good, the food was the unexpected highlight. The menu had far more options than expected and prices were pretty comparable to Ulu Cafe, the main counter service restaurant at Aulani. 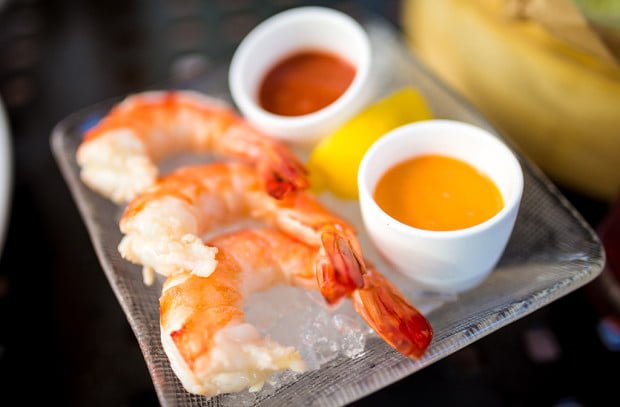 One disappointment was the shrimp entree. They tasted good and the dipping sauce was fantastic, but I don’t care how “jumbo” they are, 3 pieces is not enough. 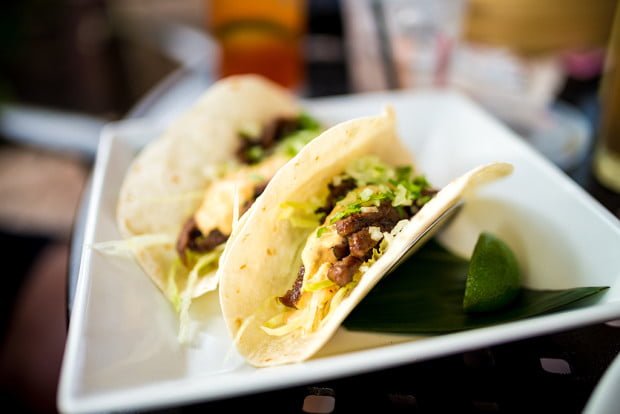 The tacos were another letdown in terms of portion size, but they were really delicious. It’s tough to get past the price and size, though. Only 2 tacos, which were small, for $14. Welcome to dining at Disney’s Aulani…where the food price-points are exorbitant because most people won’t leave property to eat!

Now is a good time to mention that there are some nice little restaurants that are much more reasonable in the strip mall across the street, and considerably better options around Oahu, if you’re willing to drive. 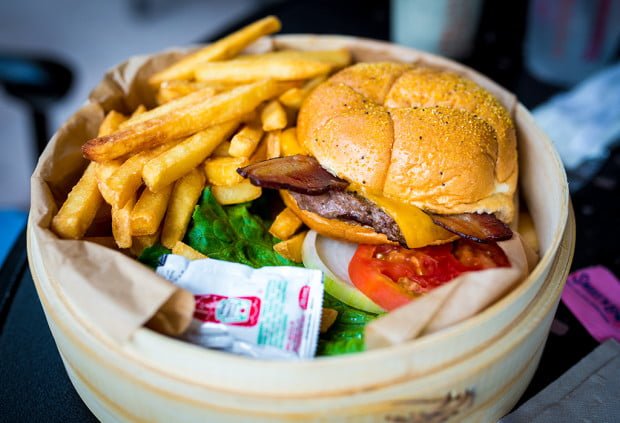 The Angus Chuck Burger was fantastic. A juicy and flavorful meat patty topped with quality veggies and a soft, high quality bun. There are definitely much more interesting, authentic options if you venture off-site, but as far as dining at Aulani goes, this is pretty good in terms of value. It’s all relative. 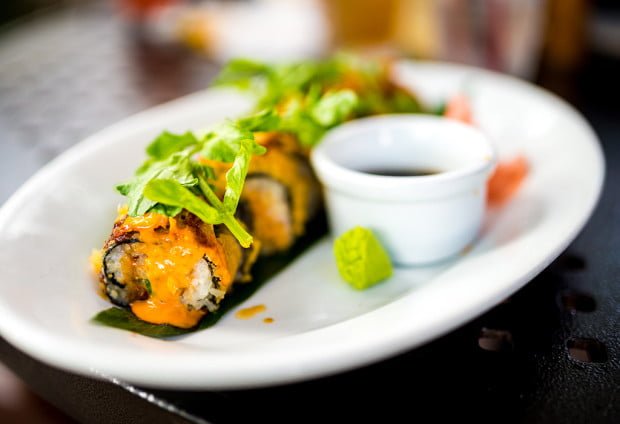 The sushi was slightly above average, which I found a bit disappointing because I expected exceptional sushi in Hawaii. I’m not sure why, but you’d think that an island would do sushi well. 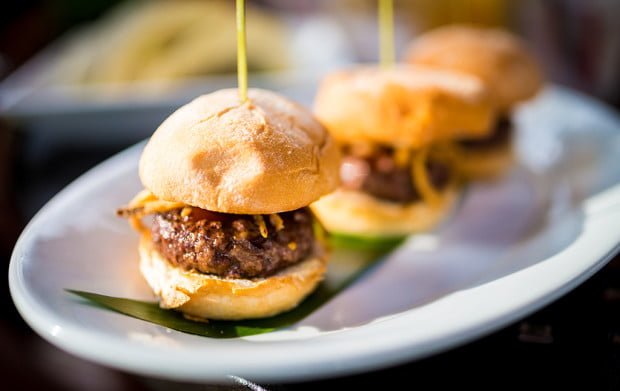 The sliders were exceptional. Like the burger, the beef was really high quality, juicy, and bursting with flavor. I find it a bit odd that the two beef dishes would be the highlights at Off the Hook, but beef is excellent, so I’m not complaining. 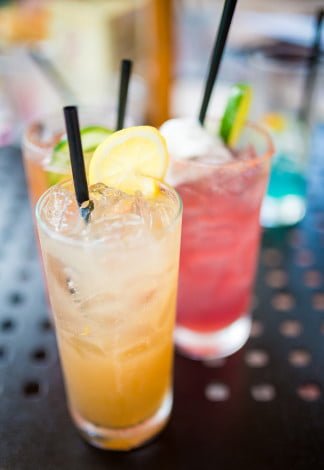 Overall, Off the Hook Bar & Lounge is a serviceable option if you’re down by the pool area at Aulani and want to quickly grab something to eat. This is one of my preferred places to eat at Aulani, but it’s all relative, as I think the food is generally overpriced and not all that special at Aulani. It’s not that the food is bad (AMA AMA is a prime example: pretty good food, but expensive making it tough to justify), it’s just that there are some really good hole-in-the-wall places elsewhere on Oahu that serve unique Hawaiian cuisine at much more reasonable price points. There are even some good choices a 5 minute walk away in Ko Olina at the mall across from Aulani. Everything is more expensive in Hawaii, but there’s no justification for the food at Aulani offering such poor value for money.

Have you been to Aulani? What did you think of the dining options? Any specific recommendations of places to eat–either on-property or off-property elsewhere on Oahu? If you have any questions or thoughts to share, please post them in the comments. We love hearing from readers!

9 Responses to “Off The Hook Bar & Lounge Review”