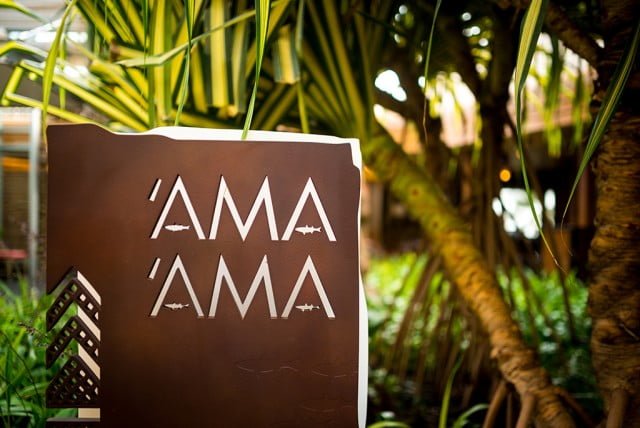 ‘AMA ‘AMA (or ‘AMA’AMA) is a Hawaiian fine dining restaurant at Aulani, A Disney Resort & Spa in Hawaii. This review features food photos from ‘AMA ‘AMA, our take on ambiance & cuisine, and other random thoughts. ‘AMA ‘AMA serves breakfast, lunch, and dinner, with the menus for all meals being described by Disney as offering contemporary twists on classic Hawaiian dishes, with locally sourced ingredients.

It seems like every Disney high-end restaurant describes itself as a ‘contemporary twist’ on ‘classic menus.’ I’m waiting for the Disney restaurant that touts itself as “serving the same grub indigenous people would have eaten in 1400!” Something tells me I’m going to be waiting for a while, but if anyone at Disney is listening, I sure would love to eat whatever weird, raw fish the vikings speared and devoured back in the day… 😉

Despite being the equivalent of a Signature Restaurant (in Walt Disney World parlance), the design of ‘AMA ‘AMA is decidedly simple. So simple it I have to assume it’s going for a haphazard-chic look. The restaurant is partially ‘constructed’ out of driftwood with gaps in between beams and lines being a prominent design motif elsewhere. It has a modern, minimalist look as a result. The chairs and tables are all simple, the roof is thatched, and the only design touch to speak of is a fountain in the restaurant. It sort of reminded me of the Anthropologie at the trendy mall near us, and that’s not exactly a compliment.

Oh, and there’s a view of the ocean… 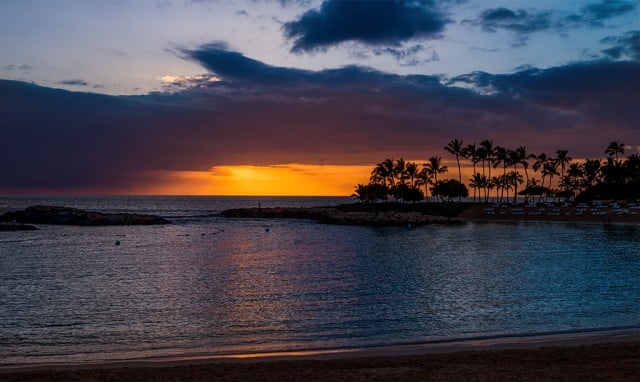 I guess when you wide open views of an ocean at sunset, you don’t really need anything else. The inside could simply be an empty ball pit from a McDonald’s play place and people wouldn’t care. Personally, I would have liked to see a bit more ambitious of a design from ‘AMA ‘AMA.

Given the character and design depth everything else at Aulani has, the style here does strike me as a bit of a disappointment. Yes, the ocean view is awesome and space does feel modern and trendy, but such a simplistic design in an otherwise ornate resort just feels a bit hollow. Perhaps that’s just me, though. 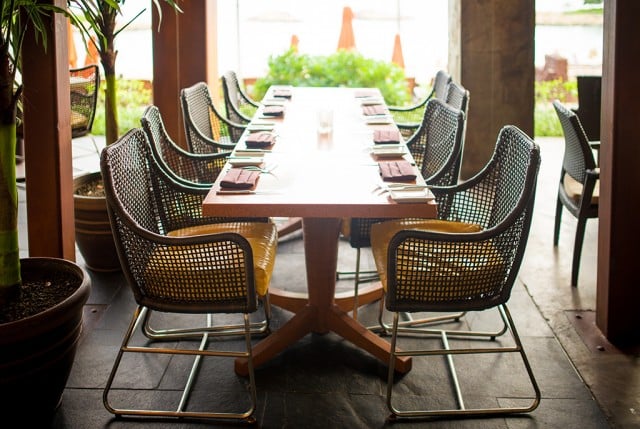 As a bit of a preface before discussing the meal, when planning our visit to Aulani and determining where we might like to eat, reviews of ‘AMA ‘AMA that I read on other Disney fan-sites were almost universally negative. This gave me a little bit of trepidation, as it’s an expensive restaurant and normally such reviews skew favorable. However, we decided to eat here anyway. 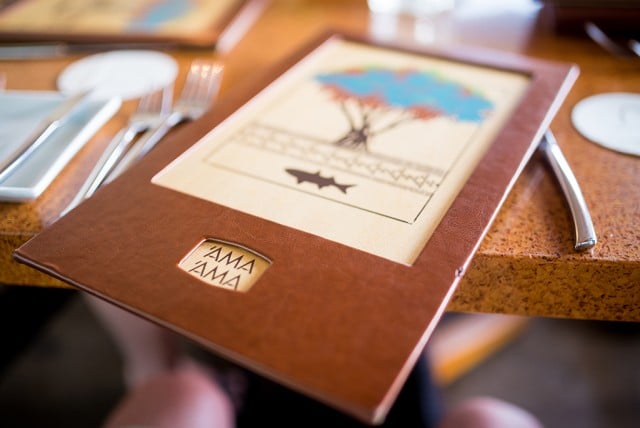 After all, those reviews were from when the resort had just opened (so maybe it had a chance to iterate on the menu in the intervening years?), it is the flagship restaurant at Aulani and I thought it would be difficult to speak with any sort of authority about Aulani without dining here, and I saw the menu had Chateaubriand. The last thing there is really the salient selling point–I’ll make any excuse I can to have some Chateaubriand! 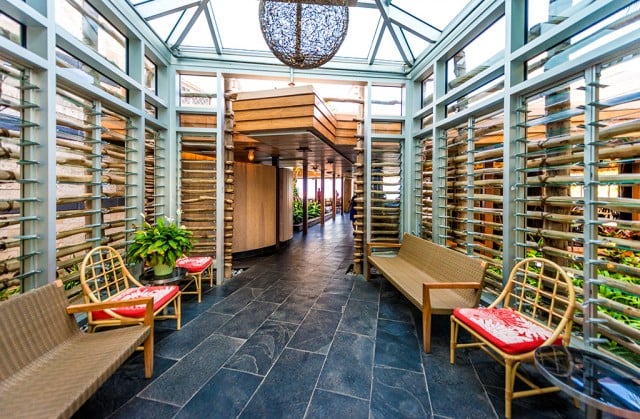 In any case, our meal was quite a bit better than what other reviewers had experienced at ‘AMA ‘AMA, and I point this out not because I doubt my own taste buds, but I do wonder a bit if the restaurant is inconsistent (which could explain our meal as an anomaly) or if it has improved since opening.

If the former is the case, you should take this review with a grain of salt; if the latter is the case, you should take reviews from the resort’s opening with a grain of salt. Not that they mean anything, but if you look at recent TripAdvisor reviews (sort by date), they seem to skew more towards 4-5 star reviews, whereas early reviews are in the 3 range. I’d love to hear from others who have dined here in the comments to provide some differing perspectives and balance. 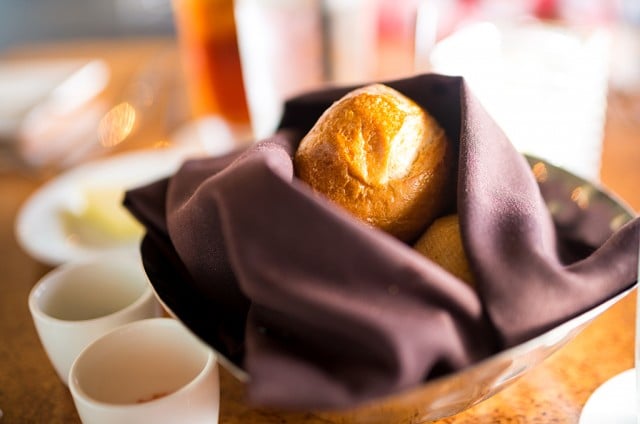 Our meal started with bread, which was served with sweet butter and island salt. 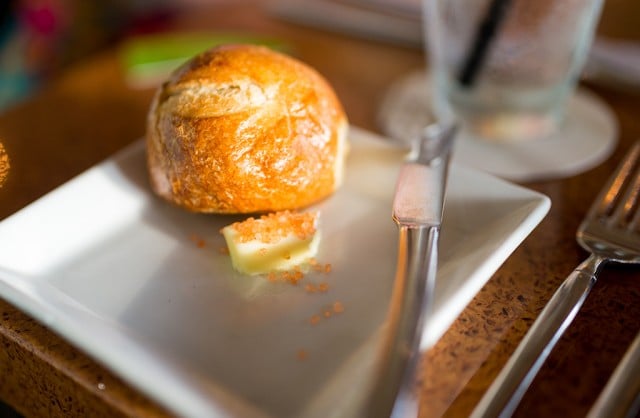 The bread was fresh and the salt gave it a good, unique flavor. 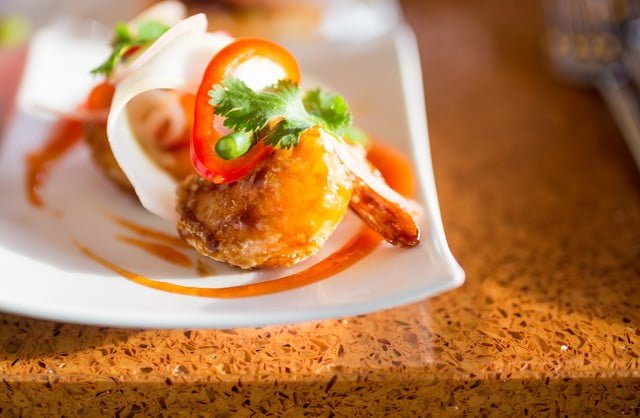 We were dining with two friends, and one friend and I elected to order the ‘AMA ‘AMA Menu for 2, which included an appetizer, and the 4 of us agreed to just split this plus one additional Tuna Poke, since the prices for the appetizers weren’t exactly reasonable, and, in judging what we saw at other tables, the portions were small. 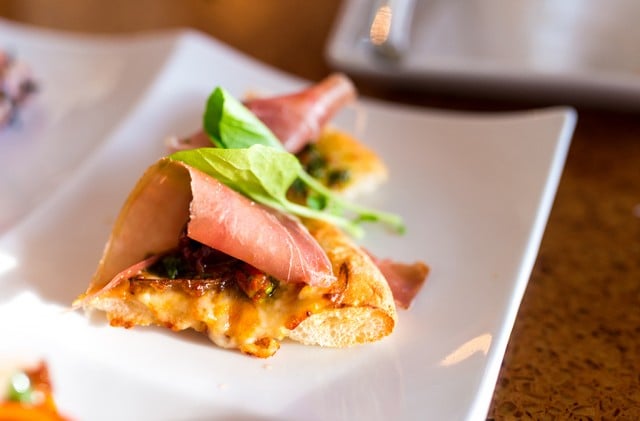 The appetizer for the menu for 2 was “Chef’s Choice,” and came with four of the regular appetizers in what I presume were smaller portions: the Lobster Mac & Cheese, Big Eye Tuna Poke, Ham Flatbread, and Crispy Pepper Shrimp. 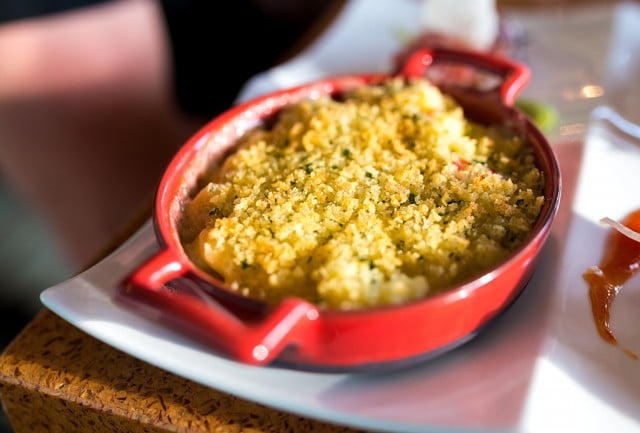 As it is anywhere, always, the Lobster Mac & Cheese was the star of the show. The cheese was rich and creamy, the texture was nice, and there was a generous amount of lobster. 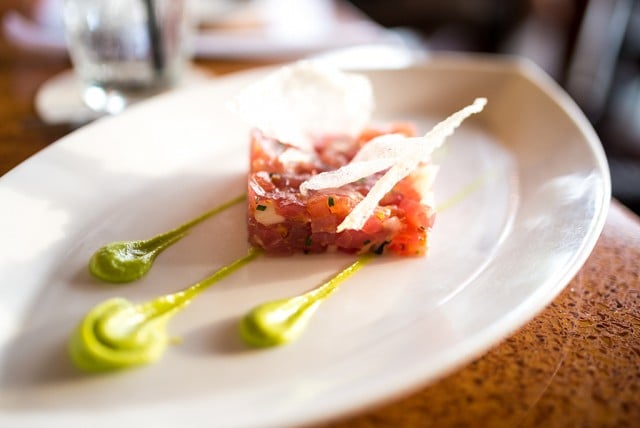 The Tuna Poke had a nice, refreshing taste to it, but nothing else really struck me as a standout. This could be because I only had a small taste of each, but I wasn’t really wowed by any of the appetizers outside of the Lobster Mac & Cheese. The presentation was nice, but that’s about it. 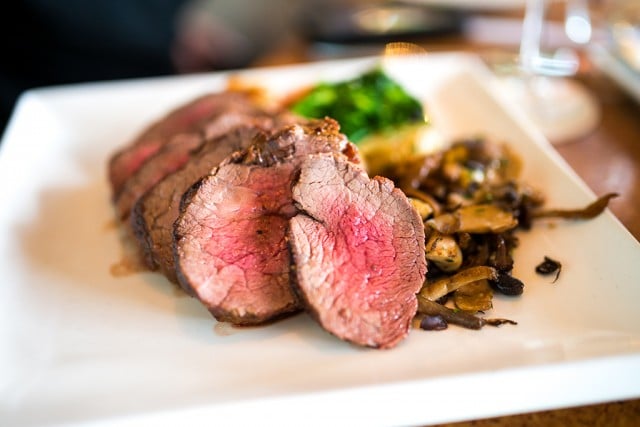 For our main course, out came the Natural Angus Chateaubriand. This was cooked to perfection, melt in your mouth good. The meat hit my tongue and it felt like it put my taste buds in a state of paralysis at the shock at how delicious that flavor was. It’s touted as being for 2, but I easily could have eaten this all by myself. Not because the portion was small, but because it was so ridiculously good. While the meal, as a whole, was good, this steak was downright memorable. My mouth is watering as I write this right now, thinking back to that meat. 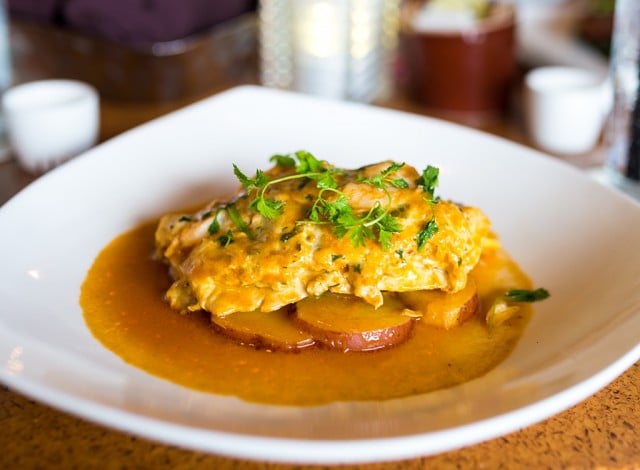 Sarah had the Hawaiian Snapper with Seafood Crust, which she really liked. I tried this too, and I was impressed. I don’t recall having had Hawaiian Snapper in the past, but it seemed like a light, sweet fish, and I think fish like this is best prepared with a crust or flavorful sauce to really enhance the flavor profile. That was the case here, and it felt like the seafood crust really gave it the oomph it needed. 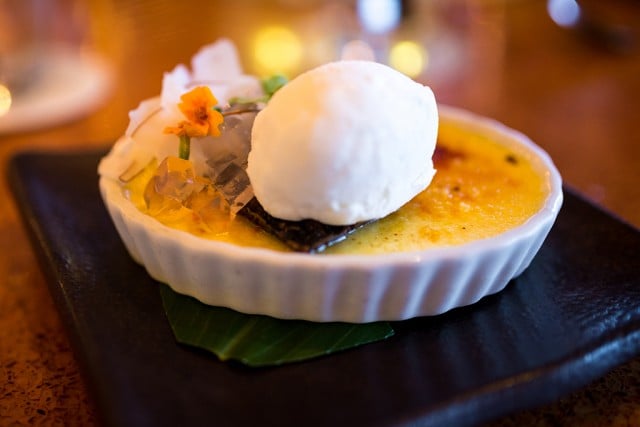 For dessert, the Menu for 2 came with the Lemon Grass Creme Catalina, which was also very good. A lot like a creme brulee. It wasn’t too rich or heavy, but had a great, almost creamy flavor to accompany the refreshing nature of the lemon grass. 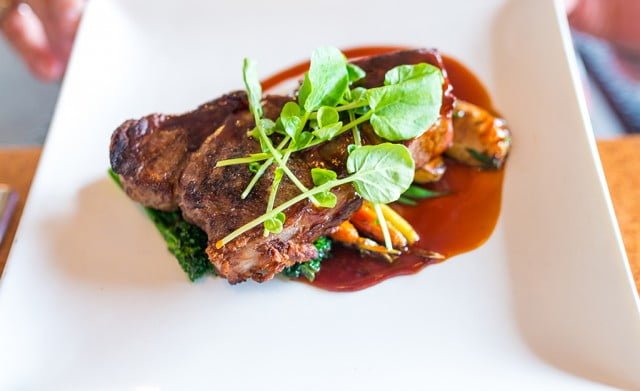 One thing I did note about the menu is that it’s really not all that Hawaiian. Not that I’m an expert on Hawaiian cuisine or anything, but outside of the Hawaiian Sustainable Catch of the Day, all of the menu items seemed like steakhouse or fine dining standards, with a Hawaiian element here or there that didn’t in any way define the dish. A good meal is a good meal, so I’m not protesting too loudly here, but if you’re taking a Hawaiian vacation and want an authentic culinary experience, it doesn’t seem to me that you’re getting it at ‘AMA ‘AMA. Of course, maybe what they mean by “contemporary Hawaiian cuisine” is dishes inspired by other resorts on the islands that have also effectively Americanized Hawaiian food. 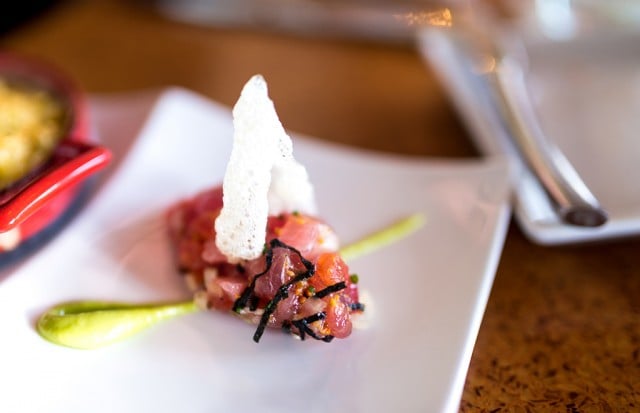 Another thing to note is that the prices here are fairly outrageous. The combination of the Disney premium, plus the fine dining premium, plus the Hawaii premium is a bit much here. We ended up spending around $80 per person to dine here, and the reason it was “only” that much was because two of us did the meal for 2, and we didn’t get a separate appetizer and dessert for everyone. You could easily spend over $100 per person after all is said and done. 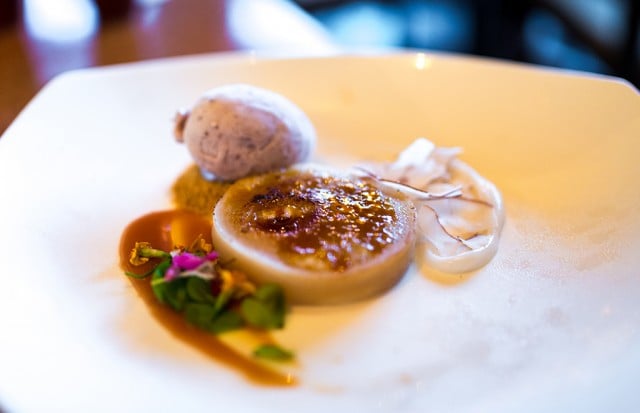 Overall, it’s tough to know exactly how to approach ‘AMA ‘AMA in terms of a recommendation. If you’re staying at Aulani and want a conveniently-located fine dining experience or a relaxing dinner experience followed by a romantic walk through the resort and back to your room, this is a worthy option. The high points of our meal were very high, and although some things weren’t all that memorable, I am glad we dined here. However, if you are willing to venture outside of the resort, I think you’ll likely find a more authentic fine dining experience elsewhere at a more reasonable price point. As I’m always interested in authentic cuisine (and I’m not opposed to saving money!), I don’t see us doing dinner at ‘AMA ‘AMA again. Breakfast or lunch, maybe. Even with the great meal we had here, the scales still seem to favor trying something else next time.

Have you dined at ‘AMA ‘AMA? What did you think of it? Is it something on the menu you’d like to try? Any specific recommendations? If you have any questions or thoughts to share, please post them in the comments. We love hearing from readers!